BirdNote®: Drinking on the Wing 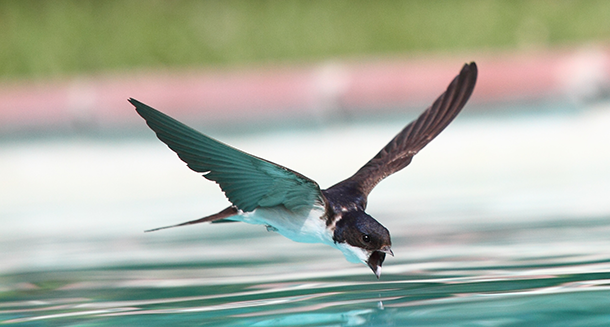 A tree swallow dipping down for a drink (Photo: Nicholas Sanchez, Creative Commons 2.0)

Most birds drink standing up, but swallows and swifts dip down over ponds to drink on the wing. In this week’s BirdNote® Michael Stein examines where this adaptation come from.

CURWOOD: As the days and evenings grow longer, and the weather entices us outside, the twittering of swifts and swallows overhead catches our ear. And as Michael Stein explains in this BirdNote®, if we pay close attention to them – we’ll notice something unusual.

BirdNote®
Drinking on the Wing
[Tree Swallow song, http://macaulaylibrary.org/audio/137594, 0.06-.10]
As a Tree Swallow swoops gracefully across a marsh, its long, slender wings glint a deep, iridescent blue. It glides close to the surface, tips its head down, and lightly skims the pond for a second with its beak open. Drinking – on the wing.
[Tree Swallow calls, http://macaulaylibrary.org/audio/94428]
Many birds drink while standing: dipping their beaks into a pond or birdbath, taking a beakful, and then tossing their heads back to swallow the water. And most birds can’t pull off a daredevil, in-flight drink because they just aren’t built for it. Swallows are such virtuosos of flight that their skimming the pond almost looks like showing off. [Tree Swallow calls, http://macaulaylibrary.org/audio/94428]
Drinking on the wing suits swallows best. They walk awkwardly on the ground on rather short legs, and their long wings are pretty cumbersome. So it’s far more efficient to grab a drink on the glide. This adaptation holds true for some other birds, too. 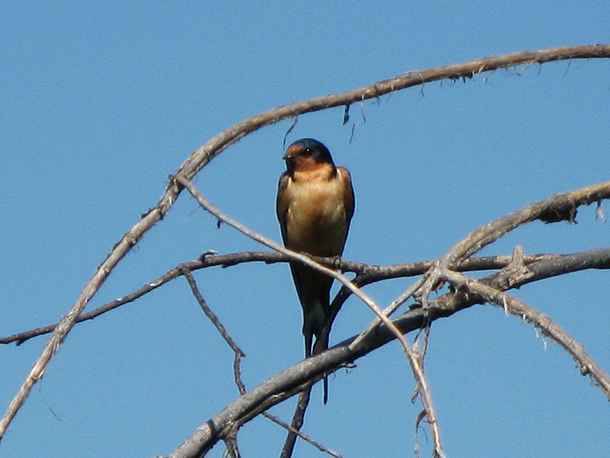 A barn swallow perched on a branch in Colorado (Photo: One Heart Art, Flickr CC BY-NC-ND 2.0)

[Common Nighthawk calls, http://macaulaylibrary.org/audio/516732]
Common Nighthawks are much bigger than swallows, with a two-foot wingspan. They take their water in flight, too. While swifts, with an even longer-winged structure than swallows, have such short legs that they never land on the ground, and so a sip on the wing is all but essential. I’m Michael Stein.
[Chimney Swift calls, http://macaulaylibrary.org/audio/5995, 0.07-.09]
###
Written by Bob Sundstrom
Bird sounds provided by The Macaulay Library of Natural Sounds at the Cornell Lab of Ornithology, Ithaca, New York. Tree Swallow [137594] recorded by Gerrit Vyn; Tree Swallow [94428] and Common Nighthawk [516732] recorded by W L Hershberger; Chimney Swift [5995] recorded by G B Reynard
BirdNote’s theme music was composed and played by Nancy Rumbel and John Kessler.
Producer: John Kessler
Executive Producer: Dominic Black
© 2016 Tune In to Nature.org May 2016 Narrator: Michael Stein

CURWOOD: For pictures, glide on over to our website, LOE.org.