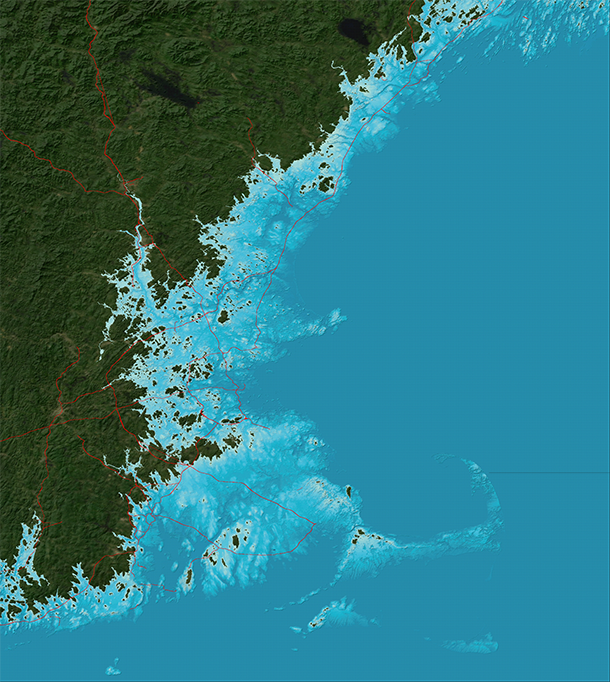 Much of the New England coastline would be inundated if the Greenland and Antarctic ice sheets were to melt. (Photo: Kevin Gill, Flickr CC BY-SA 2.0)

A unanimous ruling by the Massachusetts Supreme Judicial Court in favor of youthful plaintiffs and the Conservation Law Foundation requires the defendant, Massachusetts Department of Environmental Protection, to ramp up its efforts to reduce greenhouse gas emissions. We turn again to CLF’s Brad Campbell, who discusses with host Steve Curwood why Massachusetts state law necessitates this action, and the implications of the ruling.

CURWOOD: It’s Living on Earth, I’m Steve Curwood. More and more youthful plaintiffs are suing governments in the US for failing to safeguard the climate and their future - and sometimes winning. The Massachusetts Supreme Judicial Court recently ruled in favor of four young people who said the state had failed to follow through on laws that require reduction of greenhouse gas emissions, and ordered it to get going. We turn back now to Brad Campbell, the President of the Conservation Law Foundation, one of the organizations involved. I asked him why this case is so significant.

CAMPBELL: This is a landmark decision requiring economy-wide mandatory and declining carbon emissions limits. Massachusetts has one of the most progressive greenhouse gas limit laws in the country, and yet, beginning with the prior governor, the agency simply refused to issue the regulations to implement that law according to its terms and to impose declining emissions caps across a range of sectors.

CURWOOD: This is the law. 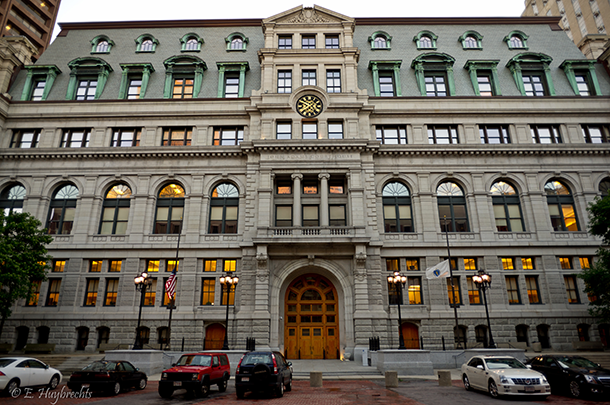 CAMPBELL: This is the law, and we were of the view that the law was very clear. We got a lot of push back. Essentially, the agency tried to cite a bunch of unrelated regulations, that they said constituted compliance with the law, at least one of which was done before the law was even enacted, and the Supreme Judicial Court agreed with us that the law is mandatory, it's not just aspirational, not a suggestion or guidance. This is another example where the courts have stepped in to make clear that carbon dioxide, greenhouse gases, are a pollutant and a form of pollution that presents an immediate threat to public health and the environment and one that has to be regulated, in this case, through declining emissions caps across the economy.

CURWOOD: So give me some numbers here. How far short of the 2050 goal that's in this law, cutting greenhouse gas emissions, is the Commonwealth of Massachusetts? Why are they in violation of the law?

CAMPBELL: Well, depending on whose numbers you believe, we’re somewhere between 18 and 25 percent off target, and we tended to not use the word "goals" because they really are essentially mandatory rather than aspirational. At the same time that we think we're off track and falling short on emissions reductions right now, the technology is available, and the solutions are essentially in reach to get back on track quickly and reach those goals. 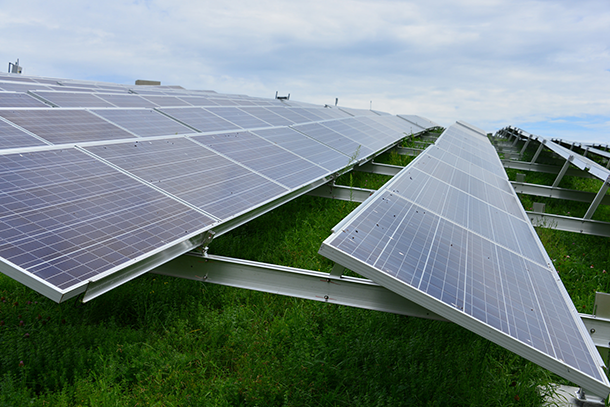 CURWOOD: How significant is it that the Massachusetts High Court was unanimous? All seven justices ruled in favor of your position.

CAMPBELL: I think it's very significant. It removes any doubt about what the statute required, and it really removes any kind of partisan quality to the decision. The decision was written by the most conservative justice on the court, one for example who dissented on marriage equality, so it's a decision that, I think, will bring all sides together on the need to find common sense solutions that meet the statutory mandate, and I think it's both remarkable and welcome that the current governor of Massachusetts, Charlie Baker, his administration has embraced the decision and has indicated that they're willing to work with the environmental community on finding a good approach. 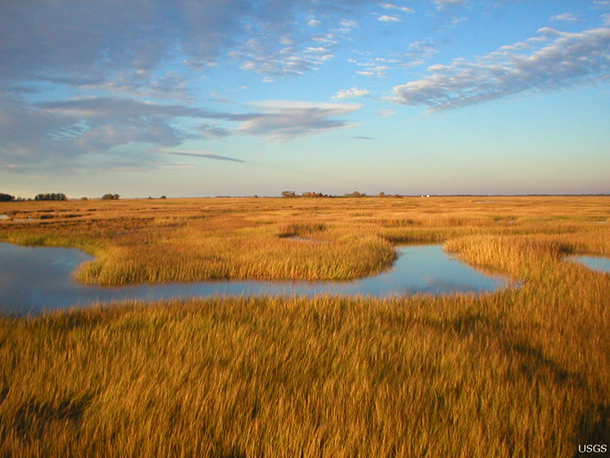 Under conservative projections of sea-level rise, the Plum Island Estuary off the coast of northeast Massachusetts would be submerged. (Photo: Matthew Kirwan / USGS, Flickr public domain)

CAMPBELL: There's no doubt that the closing of Pilgrim and other nuclear plants in the region present an additional challenge in terms of our need for low or zero carbon energy, but there've been numerous analyses to show that we can stay on track even with the closure of the Pilgrim nuclear power plant and others, that the technology and the ability through a smarter grid, renewable energy, demand reduction, that the tools are available to us right now to get back on track to a low carbon future.

CURWOOD: Where else in the US are there strong state laws regarding action on climate that, well, might also be vulnerable to lawsuits similar to the one that you succeeded in, here in Massachusetts?

CAMPBELL: CLF has a similar suit currently pending in Rhode Island, which has another global warming solutions type act in play and where they're attempting to permit a new gas-fired power plant, and that's typical of the proposals we've seen across New England. It’s really an effort by big coal and big oil to simply shift us from an addiction to one fossil fuel to another. If we're ever going to achieve the climate goals that were articulated in Paris, articulated in state statutes in Massachusetts and Rhode Island, or the climate goals that we need simply to maintain a hospitable environment for our children, we can only do that if we say “no” to this new generation of fossil fuel infrastructure and keep on pace to a cleaner energy platform. 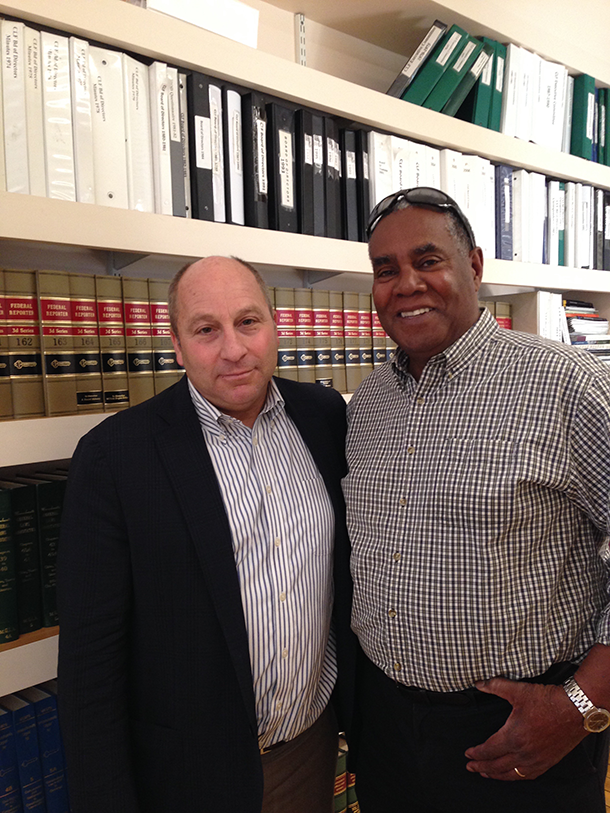 CURWOOD: California also has a very strong climate program, AB 32, for folks who want to be technical. What vulnerability there do you see for legal action?

CAMPBELL: California has made great progress and does not have the same challenge in terms of agencies dragging their feet or even industry resisting so much the need to reduce carbon and other greenhouse gas emissions. California is proceeding with decarbonizing its economy and demonstrating that you can do that and still have one of the most robust economies in the world. In the New England region and another parts of United States, the challenge is that you have multiple states that are essentially on the same energy grid and that don't have unitary laws, so it's a tougher challenge because you have to coordinate more states, you have to coordinate more regulatory bodies, to get them on the same page.

The Massachusetts Department of Environmental Protection says that the state “remains committed to meeting the Global Warming Solutions Act goal of reducing greenhouse gas emissions by 25 percent below 1990 levels by 2020, as well as achieving greater reductions for 2030 and beyond.”


Conservation Law Foundation on its win in Massachusetts climate lawsuit