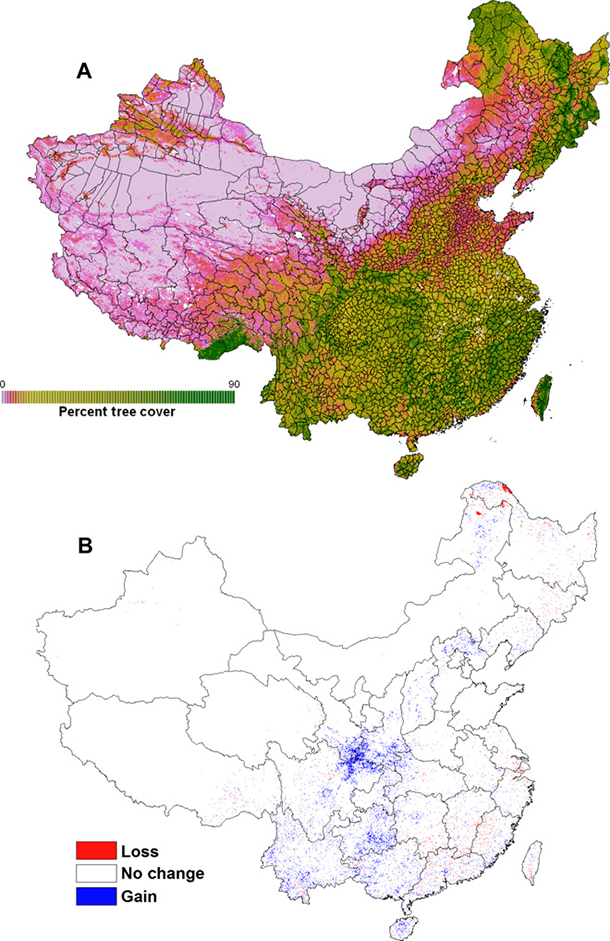 After major flooding in 1998, China introduced a national logging ban called the Natural Forest Conservation Program to help protect against erosion and rapid runoff. A recent study in Science Advances of 10 years of satellite data found significant recovery in some Chinese forests. But Andrés Viña, an author of the paper, explains to host Steve Curwood that this reforestation in China is probably shifting deforestation elsewhere.

CURWOOD: In 1998, China endured heavy rains and devastating floods that killed thousands of people and evoked memories of the 1931 floods that had killed millions. And even as the 1998 waters were still receding, the Chinese government announced it would outlaw the clear cutting of forests, and restore lakes and wetlands since trees and swamps can help soak up rainwater and reduce the risk of flooding. China also began its “Grain for Green” program paying farmers to prevent erosion and reforest hillside terraces. Professor Andrés Viña of Michigan State University has been following China’s afforestation program by studying 10 years of satellite images. He is co-author of a paper on the subject in "Science Advances". He joins us now. Welcome to Living on Earth, Prof. Viña.

VIÑA: Thank you for having me.

CURWOOD: So what was the basic premise of your study? What did you set out to answer?

VIÑA: Well, after the floods of 1998 in China, the Chinese government decided to implement a series of forest conservation policies in order not to just protect the forests that they had, but also increase the amount of forests, particularly in the mountain regions in order to try to prevent the floods of 1998 to happen again. So they implemented two national programs, one was the Grain to Green program, which is basically to reconvert agricultural fields in steep slopes into forests and the other is the natural forest conservation program which is, in a sense, a logging ban to prevent deforestation and also to increase the aerial forests. At regional scales in the Szechwan province the program seems to be working in the sense that there is forest regeneration, forest recovery. And so we wanted to see if that was the case on a national scale, and we also wanted to see if the program was, in fact, related with this regeneration. 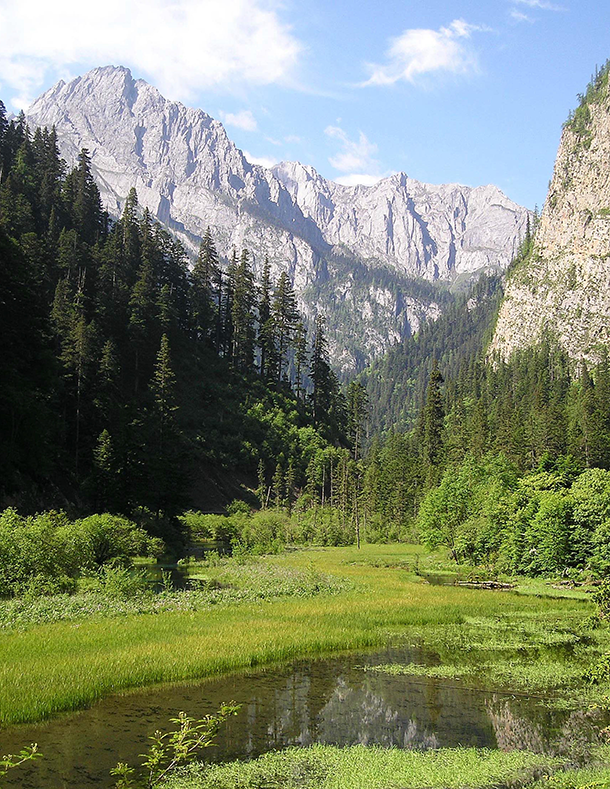 China’s conservation policies banned logging and employed locals as park rangers, protecting forests so that they could regrow. The recovery of a forest in the Min Mountains, Sichuan Province, is pictured here. (Photo: Andrés Viña)

CURWOOD: So, how much recovery did you see?

VIÑA: What we found was that, in fact, the areas of the forest had regrowth over the last 10, 15 years, and that the program was in fact related with this regrowth. I can tell you that it's about 1.6 percent of China has exceeded a net gain in forest cover. A big chunk of the gains were in Central China and that amounted to about 61,000 square miles, but there was also some places where there were losses, particularly in the northeastern part of China in the Heilongjiang Province. A big chunk of those were because of fires but that amounted to about 14,400 square miles of loss, for a net gain of about 46,000 square miles.

CURWOOD: Now, you said that some of these gains in the reforestation came from the conversion of steep hillside cropland into forest. How were peasants encouraged to give up that little plot of land even when it's on steep hillside?

VIÑA: You have to remember that this is China, so the land is not owned by the farmers. But there is an actual compensation; the Green to Grain program originally started by giving the farmers seeds, but then it turned into an economic payment in which they actually get compensation for the land that is being planted into trees. And in the case of the Natural Forest Conservation program, the places that we evaluated paid local people to go on and monitor that there is no illegal harvesting of the trees. In essence, these two programs are payment for ecosystem services programs.

CURWOOD: Talk to me about the factors in addition to the Natural Forest Conservation program that allowed the forest to grow.

VIÑA: There has been a lot of economic development in China for the last 25 years. The Chinese government claimed that 40 million people came out of poverty within the last 25, 30 years, so there has been certain big economic development in the country at the same time that these programs were implemented. Basically there was a lot of migration, rural to urban migration, and there is a reduction in the pressure of forests. And at the same time, there is an increase in the tourist environment, to spend more money in protecting the environment etc. There's more political will because there are more affluent people. 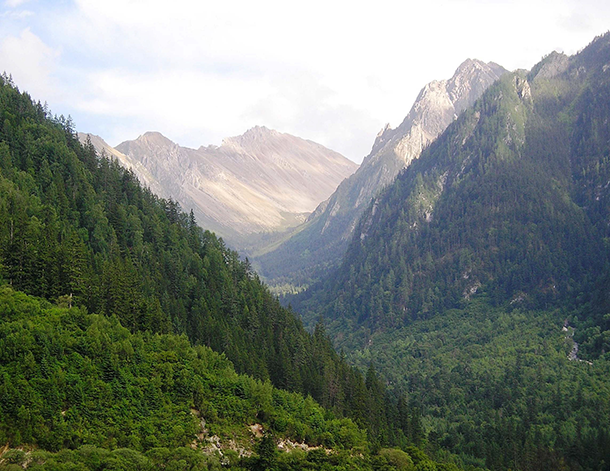 Forest recovery was seen particularly in mountain regions, including the Min Mountains pictured here, and in areas that had previously been cut down by logging companies. (Photo: Andrés Viña)

CURWOOD: What about the economics of the people who did this conversion? To what extent did people lose jobs, gain jobs?

VIÑA: There were many state owned companies doing the logging of the trees, and stopped working, stopped operating because of all the implementation of these programs. So, naturally, a lot of people were left unemployed and many of those were absorbed by the urban centers.

CURWOOD: What message to the rest of the world does this program's success offer? I'm just thinking of the recent international climate agreements. How can this help the global climate? How can this encourage other folks to follow China's path?

VIÑA: The Natural Forest Conservation Program is one of the biggest of environmental programs in the world in terms of the amount of money involved. It's about $93 billion yuan. In terms of applying a massive program as this for the developing world it's, I would say, very expensive. One has to come up with the money.

CURWOOD: Some say that China's success with forest regrowth may come with the cost of deforestation elsewhere. Tell us more about that.

VIÑA: China has become one of the leading timber importers in the world. What we believe is that this is leading to deforestation elsewhere. Where that elsewhere is, well, it's Southeast Asia, Vietnam, Indonesia, as well as Africa, Northern Eurasia, Russia are the ones that are now supplying all the gap that has been left by this program enacted. In a sense, the program exported the deforestation, and we basically also speculate that it's not just a climate issue but also a biodiversity issue because many of the places that are being deforested right now are also places of high biodiversity. We are replacing high biodiversity places and in other places for relatively poor biodiversity forests in China.

CURWOOD: So, going backwards in a quest to protect by diversity, you're saying.

VIÑA: Basically that's what we think the trend is.

CURWOOD: So how does one connect the dots here? If forest conservation in China means more deforestation elsewhere on the planet, how can scientists and countries communicate so there is a net gain?

VIÑA: I would think the only way is that we as consumers with user consumption habits and user consumption rates basically encourage China to participate in things like sustainable timber production certification. A lot of that timber that is imported it’s used to produce furniture, for example. But then is exported again to countries like the U.S. and countries in Europe, etc. So, indirectly, we are contributing to this export of deforestation. The world is globalized. What we do in one place will have repercussions beyond that particular place.

CURWOOD: In other words at the end of the day, the world is just one giant ecosystem.

CURWOOD: How do you feel about your research? Encouraged by what you see? Not so encouraged?

VIÑA: Thinking of China as a vacuum, it's a win for China, but how much a reality in terms of climate change mitigation this program is accruing is still a question mark. We believe that China is exporting deforestation so overall there is a net loss, but we don't know how much it is.

CURWOOD: Andrés Viña is an assistant professor at Michigan State University attached to the Center for Systems Integration and Sustainability. Thanks so much for taking the time with us today.

VIÑA: Thank you for having me today.


The study as published in Science Advances

Overview of the study from Michigan State University