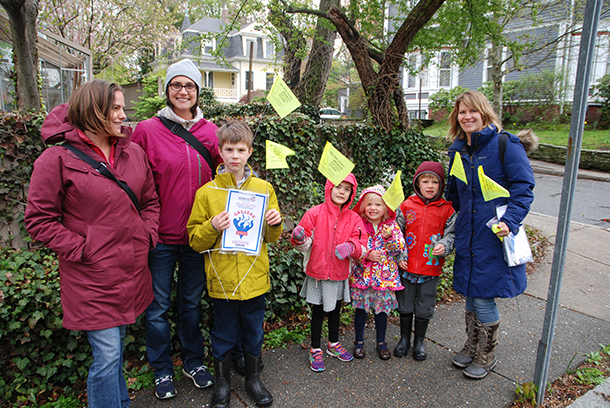 Researchers have found over 20,000 natural gas leaks in Massachusetts. Now the group Mothers Out Front that campaigns for a livable climate is flagging these leaks, to alert their neighbors to the potentially explosive methane under their streets, and damaging the atmosphere. Living on Earth’s Helen Palmer reports from the streets of Cambridge, Mass.

CURWOOD: It’s Living on Earth, and I’m Steve Curwood. Natural gas is touted as the bridge fuel to wean the US off dirtier fossil fuels. It’s plentiful, due to fracking and seen as less carbon intensive, until you factor in that it’s mostly methane, a potent greenhouse gas, and that much more of it leaks into the atmosphere at every stage of production and delivery than its boosters acknowledge. When it comes to the last stage, as it’s delivered to our homes, the quantity that leaks is staggering and shocking, partly because much of the gas pipeline system is old and corroded. Now some citizen activists in Cambridge, Massachusetts have decided to alert their neighbors to the danger that seeps up through their pavements, and Living on Earth’s Helen Palmer has been out with them. 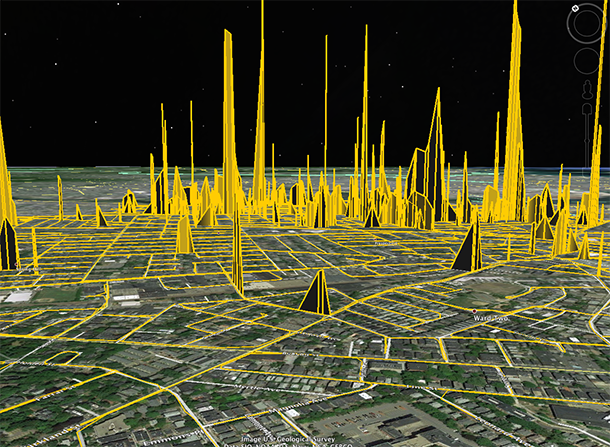 PALMER: It’s a chilly drizzly afternoon as three mothers with 5 children, and me in tow, head out onto the streets. They’ve got fistfuls of yellow flags, posters and fliers to mark some of the 200 odd gas leaks in Cambridge Massachusetts. 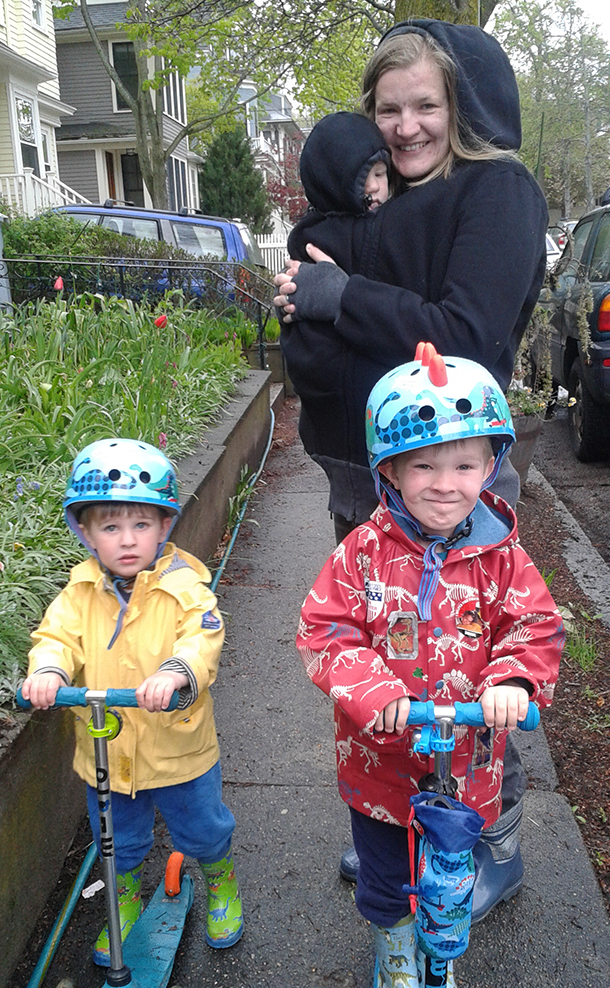 Alexandra Dellman, a Cambridge homeowner and mother, with her kids (Photo: Helen Palmer)

PALMER: Beth’s part of the group Mothers Out Front, Mobilizing for a Livable Climate.

ADAMS: We’re a group of moms and grandmothers and other caregivers who’re concerned about climate change and all children and their future. Our ultimate goal really is to transition as quickly as possible from fossil fuels to a clean renewable energy future.

PALMER: To push towards that goal, Beth Adams and the other moms – Susan Koechner, and Audrey Day-Williams and their children are flagging the 8 or so leaks in this small part of North Cambridge…

ADAMS: So we have one right here and we have 2 across the street very close together.

PALMER: Leaks aren’t a new problem for this antique gas pipeline system, indeed for years a Boston University team has been driving round the streets with a sensitive detector to pinpoint exactly where gas is escaping. Their map of Boston’s leaks spurred citizens in other communities to take action. Audrey Schulman is president of the Cambridge non-profit Home Energy Efficiency Team, or HEET. HEET works with the utility-funded program Mass Save that helps residents cut their personal carbon footprint and costs. Audrey read about the BU team and its gas detecting device in the Boston Globe. 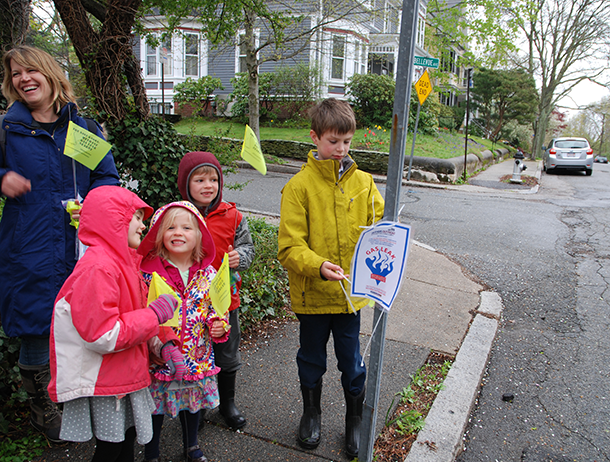 SCHULMAN: And one line in the article said that the amount of gas lost totally erased all of the efficiency programs through Mass Save in terms of their damage, and from that one line, I thought I must do something, this is an issue I must take on.

PALMER: So she borrowed the gas leak analyzer from Professor Nathan Phillips and drove it round Cambridge and Somerville mapping everywhere it detected methane. But she realized she could take this exercise further, thanks to new legislation. 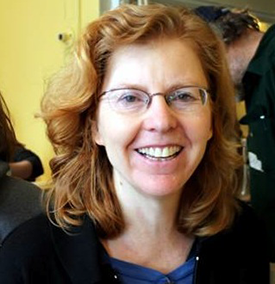 SCHULMAN: In 2014, for the first time ever, the utilities had to report on the location and age of every gas leak in their territory so I found those reports and I thought “I can map this” so I mapped over 20,000 gas leaks across Massachusetts in over 200 municipalities.

PALMER: And then she checked the leaks she’d mapped with the methane detector in Cambridge and Somerville against the lists the utilities had provided – though there remains some uncertainty about how comprehensive those lists actually are.

PALMER: And that’s how come now the Mothers Out Front are out on the streets of Cambridge with their kids to alert citizens to leaks outside their doors. Beth Adams consults the gas leaks map … 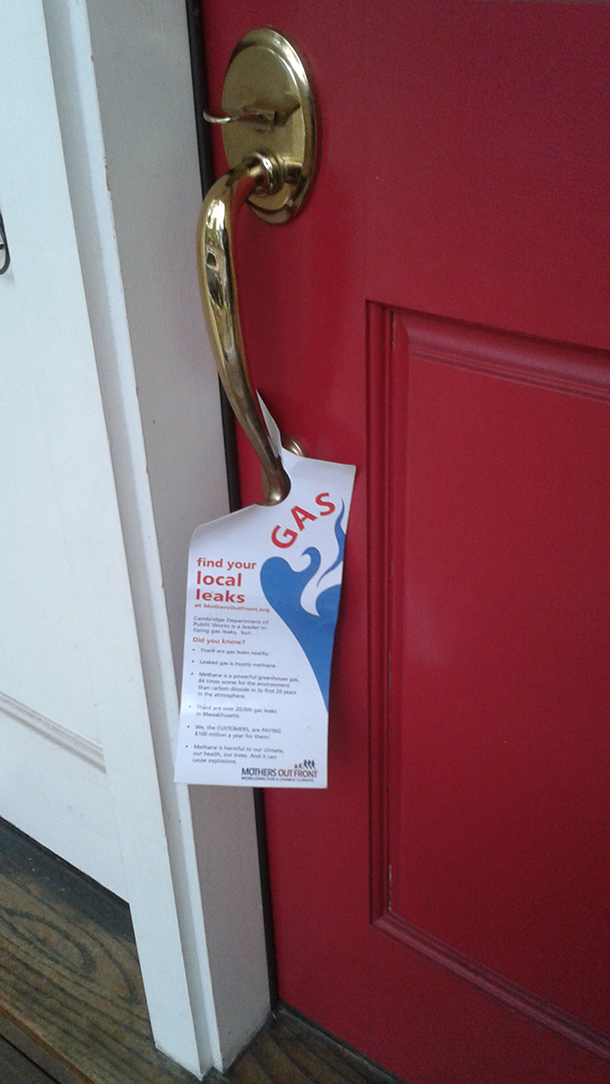 ADAMS: So we have a map of the leaks in this area. So we’re going to put down a flag, and the flag reads: “the nose knows: methane gas leak nearby.”

KIDS Where can I put the flag?

PALMER: They stick the bright yellow plastic flags into the ground beside a street tree, and tie an information sheet on a nearby pole.

ADAMS: So we’re attaching our sign here and we’re educating our neighbors, our colleagues, our elected officials and it says, “we have over 20,000 gas leaks statewide. Eversource is passing the cost to us. Leaks speed up climate change, kills trees and waste energy.” And so there’s a gas leaks right here; in fact there are 3 just within about 30 feet of each other. So we have here: “methane is leaking from underground gas pipelines near here. Find your local leak and take action for our children’s future.” You need another tie to fit it round the tree? Thank you for helping.

PALMER: The gas that’s lost through leaks is not insignificant. Audrey Shulman says a joint 2015 study from Boston and Harvard Universities calculated both what was lost, and what it cost. 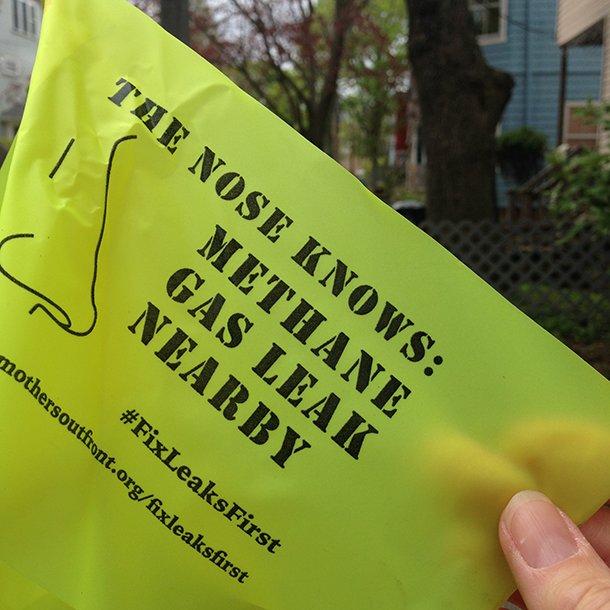 SCHULMAN: You know, from the results that it found in the Greater Boston area it calculated that about 2.7% of all the natural gas that we’re trying to get to our homes and businesses to use is being leaked out, being wasted by these aging pipes buried under the ground. So that’s about $120 million per year in Massachusetts alone.

PALMER: And, of course, it’s customers that pay for that lost gas; it’s reflected in the unit price that utilities charge, though there is a bill currently in the state legislature to prohibit the companies from pushing the cost of this wastage onto we the people.

ADAMS: So we’re going to the end of Linnaean here – sorry Avon Hill..

PALMER: And as the Mothers plant their flags, the kids run ahead to hang fliers on the door handles of the houses closest to the leaks– and what they’re doing grabs the attention of Michael Connolly, a tall elegant white haired man walking his two golden retrievers. He takes a flier. I ask why he’s interested. 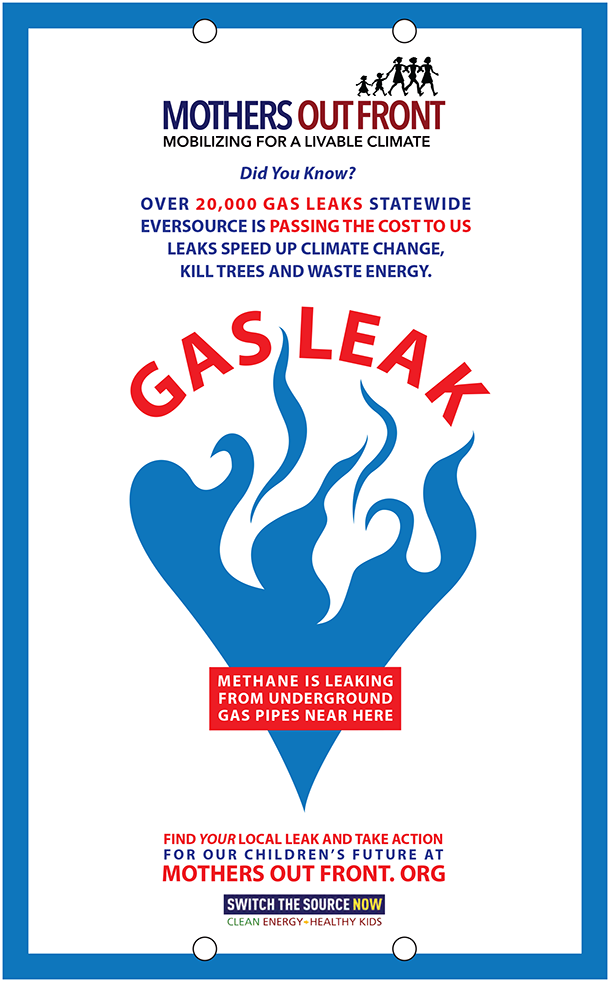 CONNOLLY: Well, 2 reasons really. There’s a safety issue, but I’m also aware that gas leaks are – I would say 100 times more prevalent than I would have guessed 5 years ago. That’s an economic issue and it’s a climate issue, and it’s crazy that we pay for infrastructure and then let it degrade and waste our resources – so that’s why.

PALMER: And as we walk on, Alexandra Dellman comes out of her house to take her children to the park with their scooters – and sees the flier the kids have just hung on her doorknob.

DELLMAN: I think it’s important stuff to know and I’m quite surprised that the residents around here don’t know about it and I’m pleased it was brought to our attention. I mean it’s definitely a worry, it’s a worry for the environment, it’s a worry on a safety and heath level and I think definitely we should put some pressure on the companies to get these leaks fixed.

PALMER: One effect of all the publicity and attention now being paid to all these gas leaks is that – yes – the leaks are getting fixed at a much faster rate. But Audrey Schulman is not impressed.

Alexandra Dellman, a Cambridge homeowner and mother, with her kids (Photo: Helen Palmer)

SCHULMAN: Becasuse of a 2014 law, they are increasing the speed of infrastructure repair, of replacing the pipes these aging pipes under the street, by 400%. So instead of replacing all the old leaky pipes in 80 years, they’re now hoping to get it done in 20 – 25 years. Which seems like still a really long time to me, because methane is such an incredibly damaging climate gas. 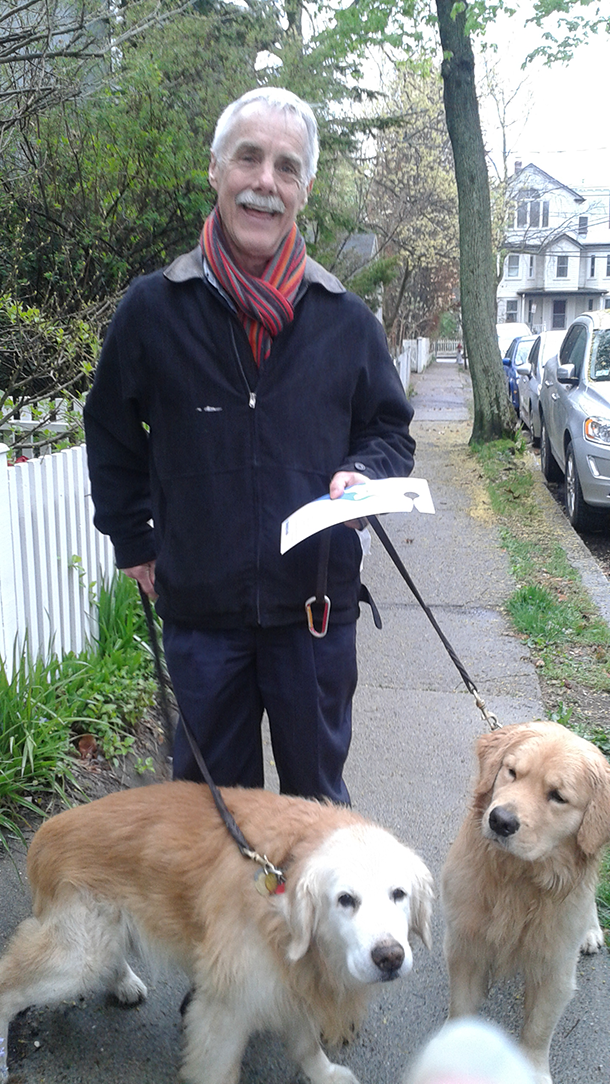 PALMER: The state’s two main utilities, Eversource Energy and National Grid, say they plan to spend billions over the next few years to fix the worst leaks. Now a study just released by a graduate student at Boston University found that 50% of the gas lost comes from just 7% of the leaks, meaning that fixing just those leaks would go a long way towards cutting the wastage, and the dangers that methane poses to health and the climate. In the meantime, the Mothers out Front and their children will continue to pound the pavements and flag the leaks to let people know what’s going on under their streets. It’s a campaign that some of the kids take seriously too – Beth Adams’ son Asher.

ASHER: I’m eight years old, and I’m really proud of my mom for helping everyone, not just us kids but everyone get rid of this thing, that there’s so many gas leaks in pipes that could cause fateful damage to houses and property because it could catch on fire and make an explosion. PALMER: So is one of the reasons you’re out here because you care about your future? ASHER: I really do care about my future and everyone else’s too.

PALMER: And faced with such moral conviction and sentiment from the mouths of 8 year olds, the utilities would find it hard to argue for any delay in fixing the persistent, wasteful, and destructive leaks in our decaying gas pipeline system. For Living on Earth, I’m Helen Palmer in North Cambridge, Massachusetts.

Massachusetts bill H.2870: a petition to protect customers from paying for leaked gas

Listen to an earlier LOE story about gas leaks in Boston