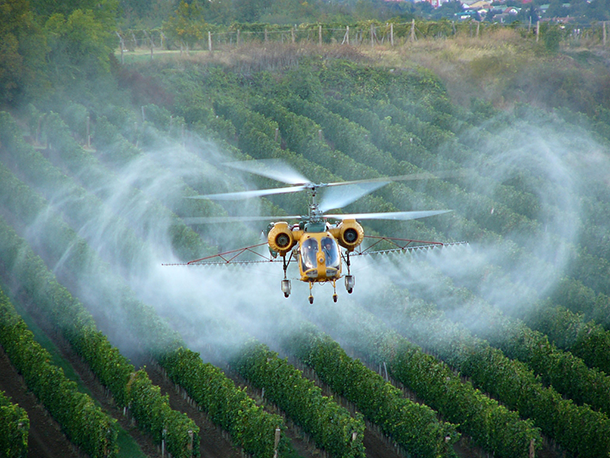 An Environmental Protection Agency report indicates that Atrazine, the number 2 weed-killer in the US, persists in the environment at levels far higher than considered safe. Reproductive damage in frogs and amphibians is linked to Atrazine, and environmental justice groups worry about health effects for farm workers; an EPA report on human health effects of the herbicide is still in progress. Lisa Arkin, Executive director of Eugene, Oregon, based group Beyond Toxics, discusses the issues and alternatives for the timber industry in Oregon with host Steve Curwood.

CURWOOD: While European regulators wrestle with glyphosate, here in the US regulators are assessing Atrazine, which is made by Syngenta. Atrazine is already banned in Europe, though it is the #2 weed-killer in the US and the EPA recently found the accumulation of atrazine in birds, fish and mammals at concerning levels of toxicity. The EPA has yet to release its human health assessments, and there is now a comment period before its final report on the wildlife impacts of Atrazine. One of its more controversial uses involves plantation forestry, where it is sprayed in combination with 24D, another potent herbicide, to promote the monoculture of evergreens on timberland that has been clear-cut. Much of this spraying has happened in Oregon, where Lisa Arkin of the group Beyond Toxics is based and she joins us now. Welcome to Living on Earth.

ARKIN: Thanks for having me on the show.

CURWOOD: How is Atrazine used out in the environment?

ARKIN: Well, here in Oregon, Atrazine is used by loading up a helicopter with a chemical soup and then spraying that from a machine with a rotating blade so you're very much dispersing this out into the environment and blanketing your ecosystem with it. Of course in farming it would be sprayed by crop dusters or by tractors with booms on them.

CURWOOD: What effects from Atrazine been documented in the ecosystems already?

ARKIN: Atrazine has been shown to be very bio persistent in the environment, so because it maintains its toxicity it's posing a chronic risk to fish, to amphibians and other vertebrates including mammals and as its concentrations get built up in the environment, it's considered to adversely impact the reproductive function of these living organisms, and that is a major concern because if reproduction is disrupted then you aren't going to have the continuation of a species. Atrazine is an endocrine disruptor that can actually chemically castrate amphibians and reptiles. We're not even sure just how much it could impact the reproductive system of a mammal, but it causes frogs and reptiles to be unable to procreate. 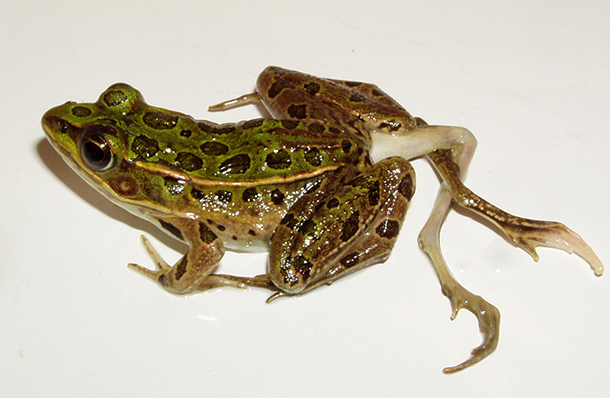 A deformed leopard frog with extra legs as a result of infection by a trematode parasite. Research suggests that atrazine may make amphibians like this leopard frog more susceptible to trematodes. (Photo: Pieter Johnson / Oregon State University, Flickr CC BY-SA 2.0)

CURWOOD: How do humans get exposed Atrazine? Of course, obviously spraying from a helicopter overhead that's kind of obvious, but otherwise?

ARKIN: Atrazine is showing up in our drinking water. You might be aware that there was a multimillion dollar lawsuit that was recently settled with Syngenta the maker Atrazine because Atrazine was found in the finished drinking water of over 100 cities in the United States. So we can be exposed by drinking water that we believe is safe to consume and of course that water is being consumed by a pregnant woman or a toddler or even an adolescent who's reproductive system is in the process of changing that could cause significant adverse impact for that individual. Atrazine has been associated with some reproductive anomalies such as hypospadias where the penis is malformed and another birth defect where the intestines are on the outside of the body instead of within the abdominal cavity.

CURWOOD: So if the forest industry wanted to stop using Atrazine for their Douglas Fir forests, what would be in your view the more ecologically responsible way to do this?

A panoramic shot of Eugene shows the area’s natural beauty and abundance of forested land, which could be impacted by atrazine in the environment (Photo: Ljmajer, Wikimedia Commons public domain)

ARKIN: If we had selective harvesting, if we had biodiverse forests rather than a mono crop, if we made sure that we were protecting drinking water, aquatic habitats for fish and wildlife habitat. If those were our priorities in addition to supporting a healthy forest economy, we could accomplish all of that without the use of Atrazine.

CURWOOD: So, let's say the EPA decides, you know what, Atrazine really isn't particularly safe in the way that it's being used right now. It's got to be banned or severely restricted. What would be the long effects of that?

ARKIN: First of all, there are other alternatives that are less harmful if you've got to use a chemical and second of all there are nonchemical alternatives, and I believe that's where we really have to focus. In Oregon, the chunk of economic benefit from organic farming is growing rapidly each and every year. If you're talking about the economy and the effects of taking Atrazine off the market for the agricultural economy I think we won't see any effect at all.

ARKIN: Atrazine and other pesticides definitely are an environment of justice issue because the people who bear the greatest burden to their exposures are usually communities that are low income or people of color and the workers who are assigned the jobs of spraying these chemicals. We find here in Oregon that often it is minority workers, so we're talking Latino or Asian workers that are told to spray these chemicals and are not even required to have a license. Also, the communities that live the closest agricultural fields or the forests that are used for industrial purposes to produce Douglas Fir and where Atrazine is sprayed by helicopter are often not only lower income communities and working-class communities, they are people who have less access to political decision-makers. They're the ones who are most impacted but they are the ones whose voices are least heard.

CURWOOD: Lisa Arkin is Executive Director of Beyond Toxics based in Eugene, Oregon. Lisa, thanks so much for taking time to talk to us today.