The Nautilus at Risk 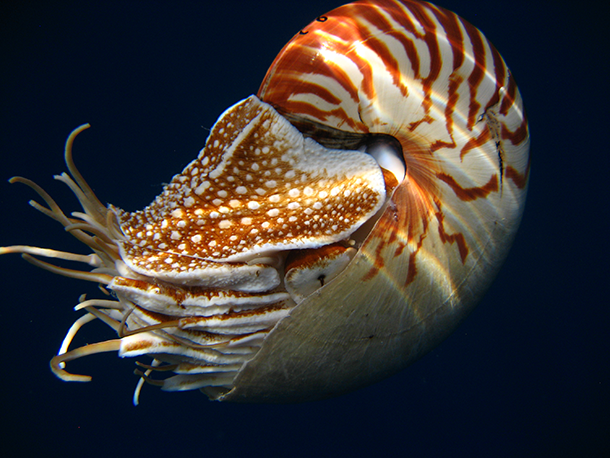 The chambered nautilus, found in the Indian and Pacific Oceans, could soon be listed as a threatened or endangered species. (Photo: Greg J. Barod)

The chambered nautilus, with its spiral shell and up to ninety tentacles, is a bizarre and beautiful cephalopod. It has remained largely unchanged through five hundred million years and five major extinction events, but now global demand for nautilus shells is driving it to the brink. Sarah Uhlemann of the Center for Biological Diversity explains to host Steve Curwood that her organization is petitioning the National Marine Fisheries Service to list the chambered nautilus under the Endangered Species Act.

CURWOOD: The horseshoe crab isn’t the only ancient creature that needs protection – consider the nautilus. The magnificent spiral shaped shellfish has survived five major mass extinctions, but its five hundred million years on earth is perilously close to coming to an end. Populations are declining so sharply that the Center for Biological Diversity has petitioned the US Fish and Wildlife Service [N.B. correction: the National Marine Fisheries Service, not US Fish and Wildlife Service] to protect them under the Endangered Species Act. The Center for Biological Diversity keeps a sharp eye on species in need of protection. And back in 2015 the Center’s Sarah Uhlemann told us about the dire situation of the Pangolin, a scaly ant-eater that’s the most trafficked creature on earth. Well, Sarah is back now to tell why the nautilus is in trouble. Welcome to Living on Earth, Sarah.

UHLEMAN: Thank you so much for having me.

CURWOOD: What exactly is a Nautilus? What does it look like?

UHLEMAN: Sure. So, this is one of my absolute favorite creatures. It's actually a cephalopod, so it means it is related to both octopus and squid, but unlike its relatives it lives its whole life in a shell. It's really the shell that makes it distinctive. The shell is about 10 inches wide, it's sort of an ivory color with these brown linear markings that make it really beautiful. What's particularly interesting about it is that it is a nearly mathematically perfect spiral. So, the picture that you have in your mind right now, that perfect spiral shell, that's the species that we're talking about.

UHLEMAN: Chambered Nautilus, really only are found in one place, and that's in the Indo-Pacific Ocean. They have a very very narrow habitat range, so you're really not going to find them much above 100 meters deep - it's a little too warm for them up there. You're also not going to find them below 800 meters because the pressure gets too great. So, if you concentrate your fishing on one particular area and you end up overfishing the Nautilus of that area, Nautilus don't swim in the open water column, so if a reef is separated from another reef by 800 feet, you're not going to have any new Nautilus populations come in to repopulate the area so you can lose an entire potentially distinct population if you overfish an area.

CURWOOD: And how does it sustain itself? What does it eat?

UHLEMAN: It's a predator, it eats crustaceans and fish. It has about 90 tentacles and there's a sticky substance on those tentacles and it ensnares the fish and then consumes them.

CURWOOD: Whoa, that's a tough customer, huh? How many of these animals are there out there? 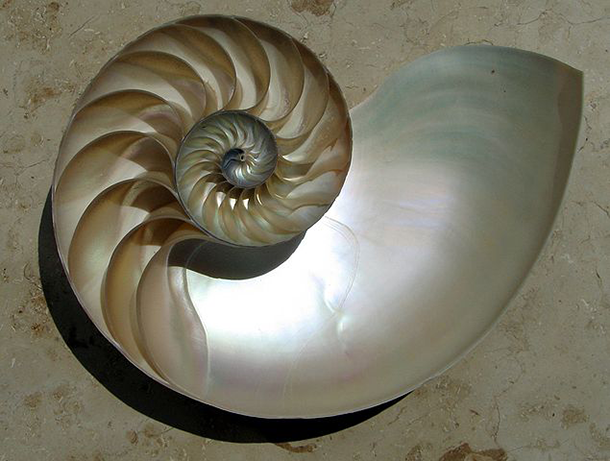 The mathematically perfect nautilus shell is a popular decoration, but high demand has led to population declines as steep as 80% in recent decades. (Photo: Chris 73, Wikimedia Commons CC BY-SA 3.0)

UHLEMAN: We don't know. What we do know though is that everywhere where there has been or is fishing for them, there are documented declines. The best evidence is out of the Philippines where over the past 30 years, fishermen have documented an 80 percent decline in Chambered Nautilius. That's a really really scary steep decline.

CURWOOD: So what's threatening them now? I understand these creatures have been around for half a billion years or so.

UHLEMAN: Yeah, scientists often refer to this creature as a living fossil because it really hasn't changed that much in the 500 million years they really haven't changed that much in the 500 million years they've been in existence. The biggest threat to the Nautilus is absolutely overfishing for its shell. People are really attracted to it, and they want it as home decor. So, we're essentially endangering a species for home decor which is just so sad. There's a lack of information about how many shells are in trade. We know that there have been 900,000 Nautilus products that have been imported into the United States in the past 10 years. I work a lot on wildlife trade issues and I have to always be very careful whenever I describe how beautiful and incredible a creature is. I have to emphasize that these creatures are most beautiful and most incredible in their natural habitat, not on some collector’s shelf.

CURWOOD: And know that I think about it, the Nautilus, when I see it on somebody's shelf, frequently people cut it in half.

UHLEMAN: Yeah, so if you cut it half, you'll see that the inside is covered with this silvery gray material that's actually used for jewelry sometimes - another way that this animal’s in demand. It's also divided into a lot of different chambers so they hatch with four chambers but as they grow they move into progressively larger and larger chambers and seal off the old ones. So, the inside has this sort of interesting chambered appearance.

CURWOOD: And what makes this species so vulnerable?

UHLEMAN: Their life history characteristics do make them particularly sensitive to over exploitation. They're very long-lived, they're very late to mature, they don't have very many eggs every year. So if a population is decimated it'll take a really long time for it to recover. It makes it very, very susceptible.

CURWOOD: You say they have long lives. Just how long?

UHLEMAN: They can live up to 20 years which is really long for a cephalopod. 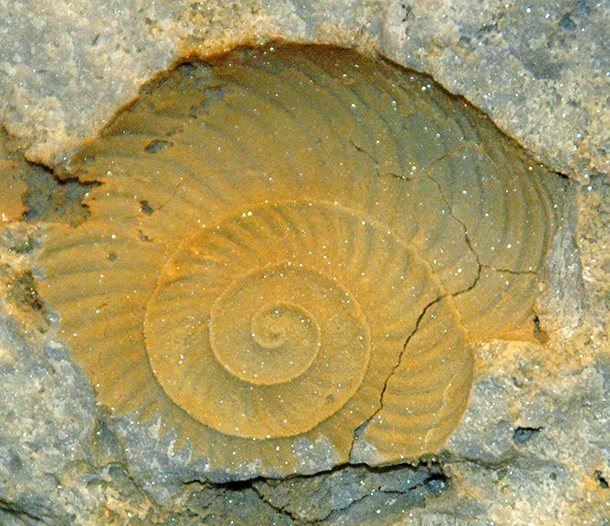 A fossil impression in dolostone of a nautilus shell, found in western Ohio (Photo: James St. John, Flickr CC BY 2.0)

CURWOOD: The Center for Biological Diversity, your organization, you filed a petition I gather to protect this species under the Endangered Species Act. How's that work? What's the timeline here?

UHLEMAN: Yeah, so back in May, my organization, The Center for Biological Diversity, filed a petition to the National Marine Fisheries Service. So that's the US agency that controls and governs marine species. We asked that agency to list the Nautilus under the US Endangered Species Act. So that means if the agency agrees, this species will finally get some much-needed protections. The agency has a couple of options. It can protect the Chambered Nautilus as“endangered,”which would mean there can be no commercial trade, no import, no sale across state lines of the Chambered Nautilus shells. Huge protections, right?

Alternatively, the agency could protect the Chambered Nautilus as “threatened.”It could definitely put some constraints and we certainly hope the agency does on trade. There is a set of timelines that the agency is required to follow. One of those is that within one year the agency is supposed to decide whether our petition is warranted. We are fairly confident that they'll find that it is. Then, the agency issues a proposed role, which gives the public an opportunity to comment, and then at the end of another year the agency has to make a final decision.

CURWOOD; Now if these animals are found in the Indo-Pacific and sold all over the world, what kind of international protections are there for them?

UHLEMAN: One of the places that's within the range is American Samoa. So, technically these guys are ours right? They are a US species, which is kind of cool, but there is another potential layer of protections for them internationally. Much to the United States' credit, just a couple months ago they proposed that Chambered Nautilus and all of the Nautilus species be protected under a treaty called the Convention on International Trade in Endangered Species. The US has proposed that Nautilus be listed as what´s called Appendix Two, which means that trade can still occur, but whatever country is exporting - so the range country - has to determine that the trade won't detrimentally affect the species' survival. So there's an added layer of protection there. And they can also start tracking how many of the shells are actually in trade. 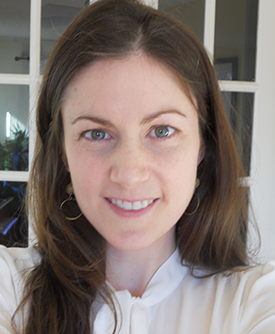 CURWOOD: So this is a bit ironic that the US has petitioned the international body to restrict this but we don't do it at home. Why?

UHLEMAN: You know, that's a good question. I think it's in part because we're just learning a lot of new information about the Nautilus right now. A lot of the reports that I'm talking about are fairly recent and a timeline is right for the US to be proposing things internationally. There is a big meeting coming up in September where 182 parties get together and decide which species deserve these international protections. So the time is now, domestically and internationally.

CURWOOD: How many other mollusks are on the endangered species list?

UHLEMAN: We estimate 186. Most of them are freshwater mussels or Hawaiian tree snails, so there you go.

CURWOOD: So, Sarah, how do you feel about this creature? What fondness if any do you have for it?

UHLEMAN: Chambered Nautilus are really one of my favorite creatures on Earth, just because they are so unique. They're related to octopus but they live in this crazy shell that is just really beautiful. They've got these wild looking tentacles, this weird eye. They're just these really incredible creatures that deserve to survive.

CURWOOD: You guys often file these petitions. How's it going with the other stuff, for example, what about the Pangolin?

UHLEMAN: I love that you've asked about the Pangolin. We did petition to get all the Pangolins listed under the US Endangered Species Act. The agency did make a 90-day finding that was positive, saying that we had enough to at least move forward in the process. I've got a lot of comments from people all over the world. The mammal that is absolutely the most in trade of all the mammals in the world, about a million taken out of the wild in the past decade. Absolutely going to go extinct if we don't get serious protections for those species now.

CURWOOD: Leonardo DiCaprio has joined your campaign on the Pangolin, huh?

UHLEMAN: Yeah, it sounds like Leo is a fan. The man has good taste.

CURWOOD: Sarah Uhlemann is the International Program Director for the Center for Biological Diversity. Sarah, thanks so much for taking the time today.

UHLEMAN: Thank you so much, Steve.

The CBD’s petition to the National Marine Fisheries Service