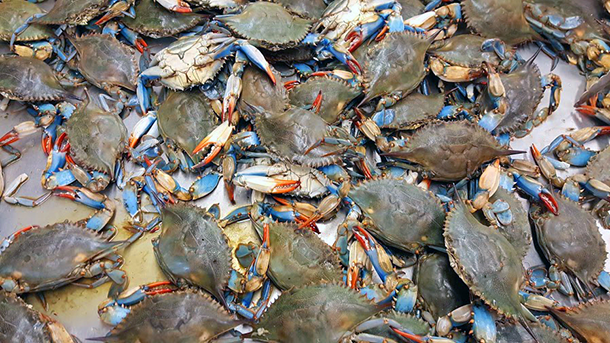 Thanks to climate change, blue crabs are being found farther north than ever before (Photo: Tim Evanson, Wikimedia Commons CC BY-SA 2.0)

Fluctuating blue crab populations take center stage in this week’s trip beyond the headlines. Host Steve Curwood and Peter Dykstra also discuss efforts by the US Chamber of Commerce that seem intended to thwart the solar industry and the importance of famed environmentalist Rachel Carson’s early book, “The Sea Around Us”, on the 65th anniversary of its publication.

CURWOOD: It's Living on Earth, I'm Steve Curwood. Time to check in with Peter Dykstra to see what’s up beyond the headlines. Peter’s with DailyClimate.org and Environmental Health News, that’s EHN.org, and on the line now. Hey, Peter, I guess it’s kind of steamy down there in Conyers, Georgia?

DYKSTRA: I think we're in the 90s for the next few months down here Steve. How are you doing?

CURWOOD: I'm doing well. Hey what have you got for us this week?

DYKSTRA: Well, the ups and downs of the seafood industry can bring good news and bad news to the same people at the same time. After a slow start due to some cold springtime weather, crabbers up and down the East Coast are dealing with a potentially huge catch this year. Researchers have estimated there are 20 percent more blue crabs in Delaware Bay this year over last, and a 35 percent increase in the Chesapeake Bay.

CURWOOD: So who could be crabby about that?

DYKSTRA: Well, the crabbers, it’s due to simple supply and demand. More crabs means more bushels of crabs caught, and that means oversupply, which means crab prices plummet. In the Chesapeake, smaller dead zones are getting the credit for the population increase. In other parts of the blue crabs’ range, it’s a different story. In Louisiana, the state, which has the largest blue crab catch, crab numbers are dropping.

CURWOOD: Oh, and the reason for that?

DYKSTRA: Some folks say it’s simply a matter of too many crabbers and crab pots. The state is considering regulating what has traditionally been a 365 day-a-year crabber free-for-all.

CURWOOD: So, what about climate change in all of this? It seems there’s always a potential link between changing sea life and warming waters.

DYKSTRA: And there apparently is here too. The biggest climate impact on crabs and crabbers is that blue crabs are being found farther north than ever before. Their traditional range was from the Gulf of Mexico up to Cape Cod, but in recent years they’ve been found off the New Hampshire seacoast and off Nova Scotia. And here’s one more impact: a study a few years back said that carbon in the water from ocean acidification may actually help blue crabs grow larger. But in many areas, blue crabs feed on oysters, whose shells are far more vulnerable to acidifying waters so they might not have as much to eat.

DYKSTRA: Well, the U.S. Chamber of Commerce is the go-to organization for American businesses both big and small, right?

CURWOOD: Well, that’s what they tell us.

DYKSTRA: But if you’re the solar business, once small but getting big in a hurry, it seems the Chamber is the go-away-from organization. The Chamber has joined in to the efforts by big electric utilities to try and thwart net metering – where rooftop solar owners sell their excess power back to the local utility. That’s something that’s always struck me as the perfect combination of generating clean energy with the power of the free market. 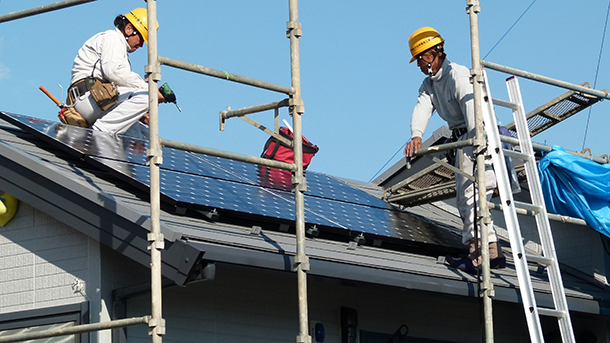 The U.S. Chamber of Commerce is joining with utilities to put up barriers to net metering of rooftop solar (Photo: Cocreatr, Wikimedia Commons CC BY-SA 2.0)

CURWOOD: And if there’s anyone who usually favors a free marketplace, it’s the people at the Chamber of Commerce.

DYKSTRA: You'd think so, but last week, the Chamber sent an email out to its members and supporters, warning that they could fall under the thumb of Big Solar. It read, “While your neighbor is receiving a credit for putting excess energy back on the electricity grid … who is paying the costs (to maintain and update) the grid? You and everyone else!”

CURWOOD: It sounds like the U.S. Chamber of Commerce is fighting against one of the fastest growing, job-producing sectors in the country.

DYKSTRA: Well, it seems to be a part of their game plan. Don’t forget the U.S. Chamber has been lobbying against environmental regulation from the Kyoto Protocol to the Clean Power Plant.

CURWOOD: Hey, Peter, what do you have for our look back at history today?

DYKSTRA: Well, most people know Rachel Carson for her courageous, groundbreaking work on pesticides, but one of her most important books came years earlier. This week is the 65th Anniversary of the publication of “The Sea Around Us,” a truly great book on oceans. 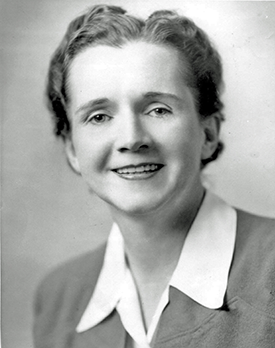 Rachel Carson’s book “The Sea Around Us” was published 65 years ago. (Photo: USFWS, public domain)

CURWOOD: Indeed, and her first three books were all about the oceans, right?

DYKSTRA: That’s correct. But“The Sea Around Us" stands out for me because it was probably the first science and environment book I ever read back in the late '60s. And more importantly, it was the first that I or most of its readers ever read about the relationship between the sea and global climate.
She devoted an entire chapter of "The Sea Around Us" and called it the global thermostat to the oceans’ impact on the earth’s temperature. She wrote this: “Without the ocean, our world would be visited by unthinkably harsh extremes of temperatures. It is an excellent absorber and radiator of heat.”

DYKSTRA: That’s correct. And Rachel Carson, who died more than half a century ago, is still a scientific prophet and, to some people, a political pincushion. Many of the folks who deny climate change also demonize Rachel Carson for inspiring the ban on DDT. Now I’m going to give you one more quote from The Sea Around Us, here it is: “It is a curious situation that the sea, from which life first arose should now be threatened by the activities of one form of that life. But the sea, though changed in a sinister way, will continue to exist; the threat is rather to life itself.”

CURWOOD: But bald eagles and hummingbirds are still around to thank her for her writing.

CURWOOD: Peter Dykstra is with EnvironmentalHealthNews, that's ehn.org and DailyClimate.org – thanks Peter, we'll talk to you again soon.

DYKSTRA: Okay Steve, thanks a lot, talk to you soon.

“The Sea Around Us” by Rachel Carson