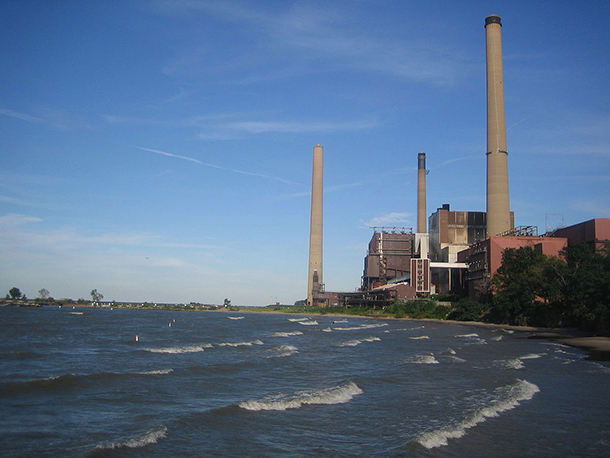 Avon Lake, a coal-fired power plant near Cleveland, has been out of compliance with the Clean Air Act for at least three years. Its particulate pollution is responsible for hundreds of premature deaths, according to PSE Healthy Energy and Nextgen Climate America. (Photo: Ben Stephenson, Wikimedia Commons CC-BY 2.0)

Pollution from power plants in Ohio and Pennsylvania in 2015 caused up to 4,400 premature deaths across the country, according to a new study. And the health damages of these 77 plants cost an estimated 38 billion dollars, mostly in already disadvantaged communities. Elena Krieger of PSE Healthy Energy and host Steve Curwood discuss the disturbing death toll of fossil fuel power plants.

CURWOOD: From the Jennifer and Ted Stanley studios at the University of Massachusetts Boston and PRI, this is Living on Earth. I’m Steve Curwood. Pollution from power plants in Pennsylvania and Ohio during 2015 led to the early deaths of more than 4,400 people in America, according to a study by the think tank PSE Healthy Energy and NextGen Climate. Residents closest to the plants near Pittsburgh and Cleveland had the highest premature death rates, but particulates and other pollutants from those power plants increased mortality and morbidity as far away as Maryland, New Jersey and Massachusetts. Poor and disadvantaged communities shouldered most of the burden of this environmental risk, and up to $38 billion in health costs and impacts. Joining us now is the lead author of the study, Elena Krieger. She’s the Renewable Energy Program Director at PSE Healthy Energy. Welcome to Living on Earth, Elena.

KRIEGER: Thank you very much for having me.

CURWOOD: So, what exactly did the study find? 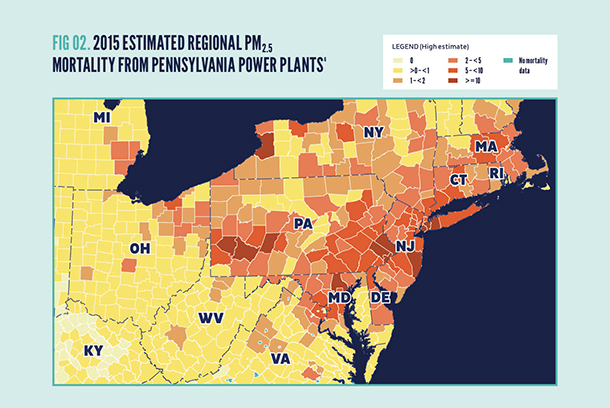 The impact of dirty power plants extends far beyond their local environments. Particulate emissions from Pennsylvania plants contribute to health problems and premature deaths as far away as Massachusetts, Virginia, and Michigan. (Photo: Nextgen Climate America)

KRIEGER: So, there are three different components to our study. We looked at demographic and socioeconomic and existing environmental and health burden information on communities living near power plants in Ohio and Pennsylvania. Ohio and Pennsylvania have some of the highest carbon emissions from the power sector in the United States. So, that's part of the reason we looked at the states. We also looked at existing environmental hazards that those plants. So these are things like on-site releases of toxic chemicals, coal ash pits where they get rid of all of the leftover ash after coal combustion, and in the third part we looked at the emissions that come out of these plants, out of the power plant stacks, and particulate matters associated with those emissions which can have health impacts far across the state and well into neighboring states and far beyond.

CURWOOD: So how far can these emissions go?

CURWOOD: So, sounds like Jersey gets a bad rap for bad air is actually...

KRIEGER: [LAUGHS] It's not Jersey's fault. Jersey has actually shut down the vast majority of its coal plants. A lot of pollution is coming in from Pennsylvania and Ohio.

CURWOOD: So, what are the methods of the study? In other words, how do you know that these power plants are causing health effects that result in premature death?

KRIEGER: So, we used an EPA model called COBRA, the Co-Benefits Risk Assessment Model. We took existing historic emissions of sulfur dioxide and nitrogen oxides which are measured at every power plant every hour, and modeled where those pollutants go. There's an underlying atmospheric model that then looks at how those pollutants react in the atmosphere to form particulate matter, and where those pollutants go in relation to population centers. So we see how many people are living in each county and estimate how much particulate matter folks living in those spaces inhale. 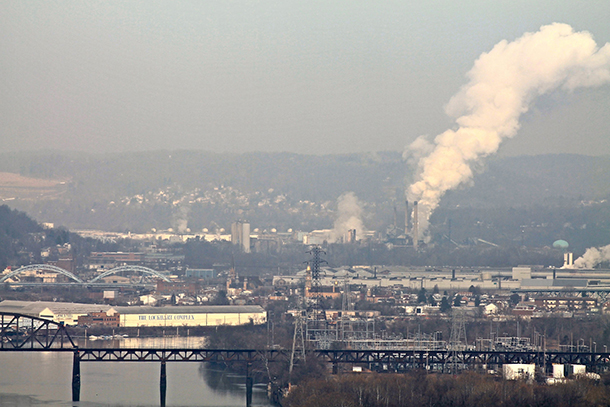 Many coal and gas-fired power plants are located in or near low-income and minority communities, which often have high rates of disease and disability and little access to health insurance. Natural gas plants like Brunot Island in Pittsburgh are especially likely to border these areas. (Photo: Jon Dawson, Flickr CC BY-ND 2.0)

CURWOOD: So, I take it that you didn't actually go to each of these counties and look at mortality and morbidity but based this on earlier studies.

KRIEGER: Yes, so the health impact side is based on modeling work, and so we cannot say,“This person specifically had a heart attack because of pollutant emissions at this plant.” What we can say is that we know that high concentrations of particulate matter are associated with a whole range of health impacts leading up to premature death, particularly for vulnerable populations like the elderly and those with underlying diseases. What we didn't calculate actually is we did not look at other pollutants from the plants like ozone, for example. It also forms from nitrogen oxide emissions, and these can also contribute to additional health impacts, so we likely have an underestimate of the impacts of these plants.

CURWOOD: So, there are a number power plants here. Any of them particularly responsible for these deadly emissions?

KRIEGER: Two of the power plants, one in Ohio and one in Pennsylvania, are two of the highest emitters of sulfur dioxide in the country. One of these is Homer City in Indiana County in Pennsylvania which is outside of Pittsburgh. The other one is Avon Lake which is near Cleveland in Ohio. Avon Lake is also situated in a county where concentrations of particulate matter and ozone exceed federal standards and some of the highest asthma rates in the state as well.

CURWOOD: Now, these emissions can travel quite a distance, but I'm thinking that folks living closer to these power plants had more trouble. How correct is that assessment?

KRIEGER: So, if you look at the per capita health impacts, they tend to fall heaviest on the counties containing the plants and downwind from those plants. The majority of the power plants are located in low-income communities. Half of the power plants in Pennsylvania are located within or near communities that are designated as environmental justice areas by the state of Pennsylvania. These are places that have high levels of low income populations, minority populations, populations with low access to health insurance, high levels of background health burdens, and disease. These are particularly vulnerable communities that are most susceptible to some of the burdens of pollution in the first place. 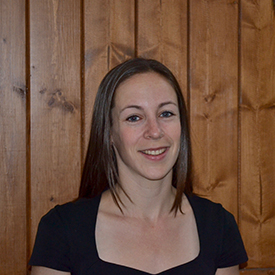 CURWOOD: Now, how specifically would the Clean Power plan that is being advanced by the Obama administration, how might that reduce the health damages that you found?

KRIEGER: The Clean Power plan sets targets for carbon emission reductions for the power sector in United States, which is the highest source of carbon pollution in the country. Each state has its own individual target for carbon emission reductions based on an existing list of gas plants, of coal plants, of whatever is generating electricity in that state. Depending on where you cut carbon, you also have a chance to cut pollution from plants that have high health impacts at the same time or are located near low-income and vulnerable communities at the same time. You're going to get a much higher benefit if you try to reduce carbon emissions at some of these plants have really high rates of, let's say, sulfur dioxide emissions near Cleveland near Pittsburgh rather than at a plant that has much lower emissions of co-pollutants and so what we hope is that this information can be a tool for people to push for regulation, special policies that will actually led to a cleaner, healthier power sector in their state.

CURWOOD: Elena Krieger is Renewable Energy Program Director at Physicians, Scientists, Engineers for Healthy Energy. Thank you so much for taking the time, Elena.

KRIEGER: Thank you so much for having me.