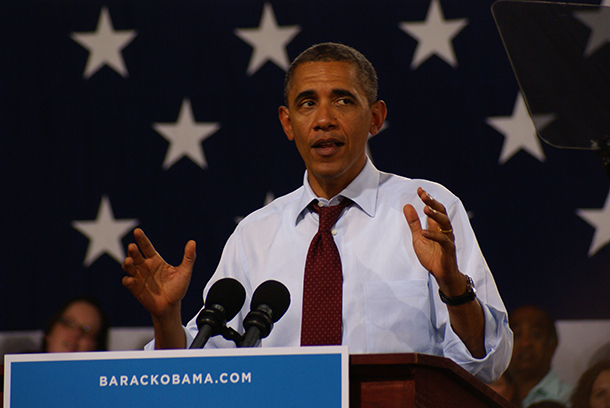 Naming a parasitic flatworm Baracktrema Obamai was apparently meant as an honor to the president. (Photo: Marc Nozell, Flickr CC BY 2.0)

In this week’s Beyond the Headlines, Peter Dykstra brought host Steve Curwood a touch of whimsy, with news of a new parasite that bears President Obama’s name, joining beetles honoring other presidents and prominent figures. Also, the big changes Tesla hopes to make to the auto sales model, and a reflection on the Hurricane of ’38.

CURWOOD: Time to visit with Peter Dykstra in Conyers, Georgia now. Peter's with Environmental Health News, that’s EHN.org and DailyClimate.org and he's been busy probing the world beyond the headlines. He's on the line now. Hi there, Peter.

DYKSTRA: Hi, Steve. As President Obama prepares to leave office, his admirers will line up the accolades just like most other presidents of any political stripe. Last week, a retired biologist who’s both an admirer and a distant relative of the President named a newly discovered creature in his honor.

DYKSTRA: The new species is Baracktrema Obamai, a two-inch flatworm that's a parasite and makes its home in the bloodstreams of turtles. It joins a spider, two small fish species, a prehistoric lizard, another parasitic worm, and a rainforest bird named to honor Obama.

DYKSTRA: Well I don't see why. After all, one of President George W. Bush’s admirers in the biology community discovered four new species of slime mold beetles and named one Agathidium Bushi in honor of the 43rd President. Then he christened two other slime mold beetle species - Agathidium Cheneyi and Agathidium Rumsfeldi, in what he insists was a compliment to all three men.

CURWOOD: And just whom did he honor with his fourth slime mold beetle discovery?

DYKSTRA: Well that was Darth Vader.

CURWOOD: [LAUGHS] You've got to be making this up!

DYKSTRA: No this is probably one of those times when I have to insist that I’m not making this up.

DYKSTRA: Yeah, in fact they renamed EPA headquarters after Bill Clinton a few years ago, and that building is right next to the Ronald Reagan Federal Building.

DYKSTRA: Yes, here are some more examples: NASA’s Johnson Space Center in Houston, not far from George H. W. Bush Intercontinental Airport; Richard Nixon High School, but that’s in Liberia, and the Navy’s nuclear-powered attack submarine, the Jimmy Carter. I always thought that last one was a little special, since President Carter served aboard submarines when he was in the Navy.

CURWOOD: But like President George W. Bush and Homer Simpson, he couldn’t quite pronounce the word “nuclear”.

CURWOOD: And now it’s flatworms and slime mold beetles. I can already hear the Marine Band playing Hail to the Parasite. What do you have next for us?

DYKSTRA: The beginnings of a political and economic battle that could have huge implications for the environment and not only that – our car culture and our home-towns. The electric car-maker Tesla is obviously challenging how we power our cars, but, you know what? They’re also threatening to take down the time-honored, legally-binding way we sell cars. 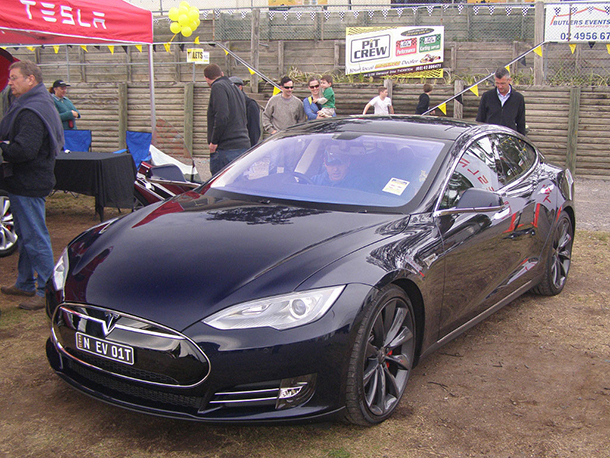 Your next Tesla car might not come from a dealer because of the company’s new direct-to-consumer business model that’s upsetting traditional car dealerships. (Photo: Chris Baird, Flickr CC BY 2.0)

DYKSTRA: In a way, yeah. The established automakers all work through a system where they can’t sell cars directly. They have to work through locally-owned dealerships. Tesla’s challenging that, and they’ve been cleared in nearly half the U.S. states to sell directly to consumers without the middle-man dealerships. And there are signs that the big U.S. automakers and their foreign competitors may follow their lead, moving to a system that’s based more on online sales, with showrooms that don’t have a sea of new cars parked outside ready to be bought and driven away.

CURWOOD: Well Tesla may want that kind of direct sales system, and others may follow, but I can’t imagine that local car dealers are all that pleased.

DYKSTRA: Oh, no. The National Automobile Dealers Association is now the biggest-spending lobby group in the whole auto industry. The Tesla marketing model is clearly more efficient, but there’s an argument for old-school dealerships that’s a little bit more than sentimental. Auto dealers may be spending more on lobbying, but they’re also a traditional cornerstone of support for local charities – like hospitals, schools, non profits, youth sports, and a lot more. It’s potentially one more triumph for Wall Street over Main Street.

DYKSTRA: You know, we’re a little bit past the halfway point in the Atlantic Hurricane season. Let’s cross our fingers that we don’t get anything like what happened on Sept 21st 78 years ago, when the Hurricane of 1938 took between 600 and 700 lives on Long Island and in Southern New England. 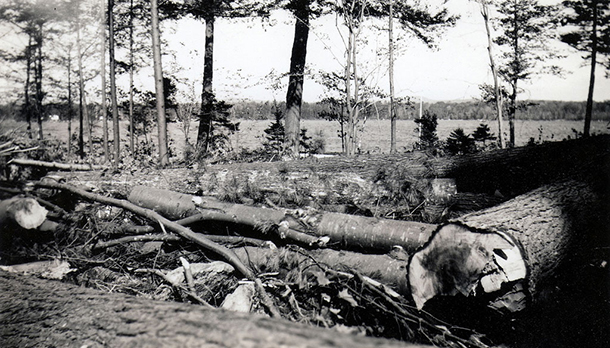 Fallen trees in Wolfeboro, New Hampshire in the aftermath of the New England Hurricane of 1938. (Photo: Lakewentworth, Wikimedia Commons CC BY 3.0)

CURWOOD: Well, thankfully we don’t have death tolls that high here anymore, what with better forecasts and warning systems.

DYKSTRA: You’re absolutely right about loss of life, but consider this: If the Hurricane of ‘38 hit today along a much more densely-developed coastline, the damage would be epic. It was a category three storm at landfall, with some weather stations reporting wind gusts up to 180 miles per hour, a 12-foot storm surge that swamped downtown Providence, Rhode Island, and serious in-shore flooding from heavy rains.

CURWOOD: And heavier rains are just what we're promised with global warming. Peter Dykstra is with Environmental Health News, that's EHN.org and DailyClimate.org. Thanks, Peter, talk to you again soon.

DYKSTRA: Thank you, Steve. We’ll talk to you soon.

CURWOOD: And there's more on all these stories at our website LOE.org.

DYKSTRA: Oh, and, Steve, don't forget...Hail to the Parasitic Flatworm!


Barack Obama is officially now a parasite (it’s an honor)

Washington Post: “The battle between Tesla and your neighborhood car dealership”