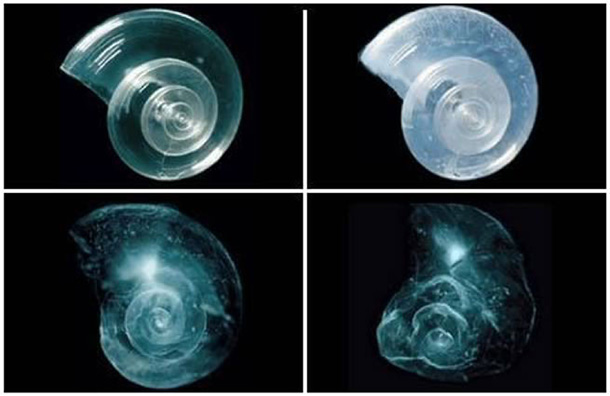 Among the harmful effects of ocean acidification is lower carbonate levels in the shells of Pteropods and other calcifying species. (Photo: David Littschwager/National Geographic Society)

The Center for Biological Diversity has filed a lawsuit against the Environmental Protection Agency, that accuses the EPA of failing to set appropriate standards to protect coastal waters from acidification. Emily Jeffers, an attorney for the Center, tells host Steve Curwood about the suit and its rationale.

JEFFERS: Thanks for having me.

CURWOOD: So, what prompted the Center for Biological Diversity to file this lawsuit?

CURWOOD: So what is ocean acidification?

JEFFERS: Ocean acidification is the process by which the oceans absorb about a third of the carbon emissions that we put into the atmosphere as a result of burning fossil fuels, and as the oceans absorb these emissions, it causes reactions in the seawater that make it more acidic, and increasing acidity makes it harder for organisms like shellfish and coral to form the hard parts, like calcium carbonate shells that they need to survive.

CURWOOD: So how has the acidity of the ocean changed then in recent decades?

JEFFERS: Well in the last -- since the industrial revolution really -- so over the last 200 years, oceans have absorbed about a third of our emissions, and the ocean has become approximately 30 percent more acidic which is really just a huge change, if you think about it. For example, an oyster that used to be able to build it shell, the 30 percent changes enough to make that shell begin to dissolve. And in the last 300 million years of Earth's history, that is the fastest acidification event that the Earth has experienced.

CURWOOD: So, this has going on for a long time, but now you're filing a lawsuit. What kind of formal pleas or complaints has the Center for Biological Diversity put forward about this issue in the past?

JEFFERS: Well, we started engaging with the EPA in 2007. We asked them then to change their water quality standard for pH to make it more strict. So the way the Clean Water Act works is the federal government, the EPA, sets water quality criteria and then the states go ahead and use that criteria to set water quality standards for their own bodies of water, and they have to either use the federal criteria or create standards that are equal to or better than the federal criteria, and we thought that the federal criteria, the pH criteria, wasn't quite strong enough and needed to have less room for error. And now the science has just exploded in the last five years on ocean acidification, and it's become increasingly clear that pH is really not the best way to measure ocean acidification. 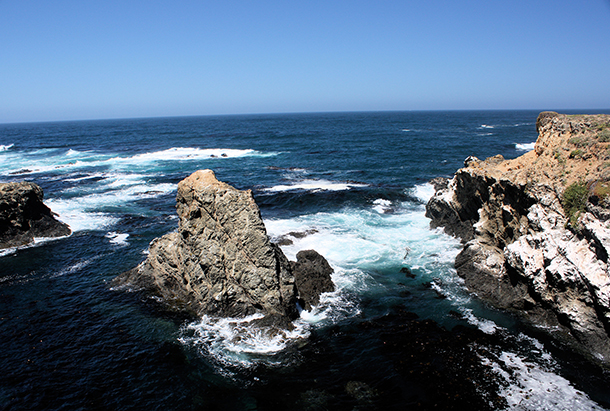 The Pacific Ocean off the Western coast of the U.S. has higher average levels of acidity, in part because the colder waters dissolve more carbon dioxide. (Photo: Naotake Murayama, Flickr CC BY 2.0)

CURWOOD: So would changing the scientific standards help the organization preserve ocean ecosystems, do you think?

JEFFERS: Well, ocean acidification, as you know, is driven by carbon emissions, and we're never going to solve the ocean acidification crisis unless we get carbon emissions under control and transition to renewable energy. However, in the near term there are other strategies that we can take. We can reduce local inputs that are increasing acidification. Local runoff, local storm water, agricultural discharge, those are all discharges that contain chemicals that exacerbate acidification, and if we can get those local pollution sources under control, that might give the ecosystems a bit of a time to adapt or to get used to those sort of acidified conditions while we tackle climate change.

CURWOOD: But if the major source of making the oceans more acidic is the burning of fossil fuels or trees, for that matter, anything that puts carbon into the atmosphere, what's the remedy that you're asking the EPA to do here? I mean, this is a worldwide problem.

CURWOOD: So, if you're successful, the ultimate outcome of all this is going to be some sort of program to reduce or eliminate carbon emissions. If the EPA starts setting standards that says that burning carbon is acidifying the ocean then they got to do something about it. I mean, it's the camel's proverbial nose under the tent I would think.

JEFFERS: Well, I mean I think it would be great if they did something. We're facing the largest extinction crisis in Earth's history. It's their duty and their responsibility to do something, but what we're asking for right now is much more modest, and it’s something that scientists all over the country have been calling for.

CURWOOD: So what's the next step in legal process now you that you've filed this action? 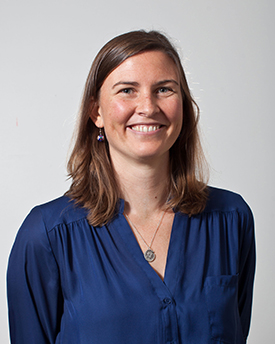 JEFFERS: The next step is that EPA has 60 days from service of process to answer our complaint, and at that time they might file a motion to dismiss or they might answer it, and after that, we'd probably have motions for summary judgment.

CURWOOD: I guess it's fair to say that the government is going to push back because haven't responded to your earlier petitions that are precursors of filing this lawsuit. What's the government's best argument against what you put up?

CURWOOD: In other words, you don't think the government has a strong argument here.

CURWOOD: Emily Jeffers is an attorney of the Center for Biological Diversity. Thanks much for taking time with us today.

CURWOOD: A spokesman for the EPA declined comment, and referred us to the Justice Department, which did not respond by our deadline.

The EPA cites ocean acidity as a climate change indicator