Urban Foraging at the End of Nature 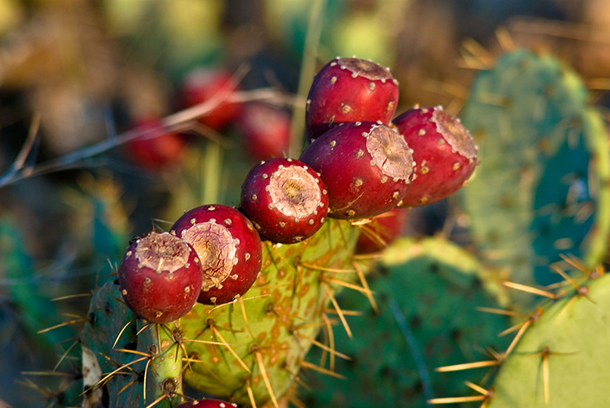 In her hometown of Albuquerque, Amaris Ketcham picks the fruit off of prickly pear cacti. Known as tunas, these fruits can be made into jellies, candies, drinks, salads, and tarts. (Photo: Corey Leopold, Flickr CC BY 2.0)

Many of today’s environmental writers grew up in urban landscapes, during economic recessions. But urban nature can also offer riches for those who are willing to look. University of New Mexico professor Amaris Ketcham reads and discusses her essay “Urban Foraging,” featured in a new collection, Coming of Age at the End of Nature.

CURWOOD: Back in the late 19th century, writers including Henry David Thoreau and John Muir were producing compelling studies of nature and the landscape. Some wrote towering prose on the sublime character of the nonhuman world and glorified wilderness. Some examined the intricacies of the natural world to learn its secrets. Then 27 years ago, Bill McKibben wrote “The End of Nature,” noting a world where no part of the landscape is untouched or unaffected by humans. And writers of the millennial generation came of age in the shadow of this mediated nature. Many of these new writers grew up in urban landscapes, during economic recessions, where the “end of nature” can seem all too real. Now there’s an anthology of essays written by Millennials, with an introduction from Bill McKibben, called Coming of Age at the End of Nature. Today we have the first of these essays.

KETCHAM: Hi I’m Amaris Ketcham. I'm an honorary Kentucky colonel and an assistant professor at the University of New Mexico where I teach creative writing and graphic design. Kentucky disbanded its militia after the War of 1812, and since then, to be a colonel is a honorary status and it just is basically title that it's given by the governor and it means you're sort of an ambassador, cultural ambassador, to Kentucky.

CURWOOD: Amaris Ketcham says she came of age at – in Bill McKibben’s phrase, the end of nature, and she’s typical of many of her generation, who are frequently lowly paid, ambitious and idealistic, and also often hungry. In this excerpt from her essay, “Urban Foraging,” she explains how she and her friends sometimes cope.

KETCHAM: We've got tricks to get grub. We're specialized. We convene and share our food. We're underemployed, staffers at local nonprofits because we believe in a more sustainable future and our hearts are in the right places, and nonprofits know how to take advantage of youth. I'm mostly living on black beans and rice and in the summer, fresh fruit. I gather the fruit from the neighborhood trees. I've always foraged around the house. I'm from the country. 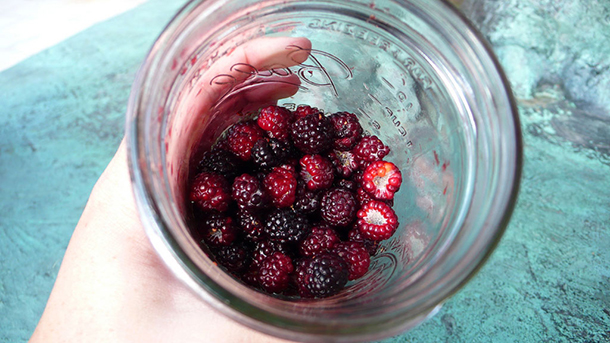 A practiced eye can find edible treasures all across the built landscape. Vacant lots, playgrounds, city parks, and apartment complexes are just a few places where aspiring foragers should look. (Photo: Katie Hargrave, Flickr CC BY 2.0)

You can catch and boil tiny crawdads and minnows from the creek, steal pears from someone else's tree and taste test foliage and berries for edibility. I only got poisoned once after dining on several apples that must've been a little funky because I spent the next day suffering from dizziness and headaches. Still, I've gotten more food poisonings more often from cheap restaurants than the trees.

One neighborhood I lived in had so much food in the summer and fall that drew a map detailing the locations of apples, apricots, blackberries, pears, plums and raspberries so I wouldn't forget the following year. Other goodies grew in yards: chamomile, clover, dandelions, lavender, nasturtium, and rosemary. Oh, I never asked permission. I chose plants in abandoned lots of apartment complexes before venturing onto private property. Usually, it was sunny outside and there were people around. When these people saw me picking fruit they would stop to join me.

So, I live in Albuquerque and actually have a quite a few apricot trees here. We have plum trees, cherry, fig -- fig and pomegranate grow really well in Albuquerque. In addition to that, there's various kinds of cactus. So, many people have prickly pear cactus in their yard. The fruit is called atuna. You can eat that. There is also wild mustard and various small plants that are edible in this city.

I think that there is a sense of community that can develop it, because it's often an experience that people haven't shared with others. For example, there's a scene in my essay where I talk about going to an apartment complex that has a plum tree, and as soon as I started picking plums, people came out of the apartment complex and they were like, "I didn't realize I could pick plums from this plum tree. Do you know how to make a pie?" Then, a car of these guys who looked like thugs got out and were like, "Is this your plum tree? Can we have plums?" So then, they started enjoying the plums, and then some teenagers came over, and within 10 minutes there was this sort of instant community, people from many walks of life all hanging out at this plum tree eating fresh fruit. 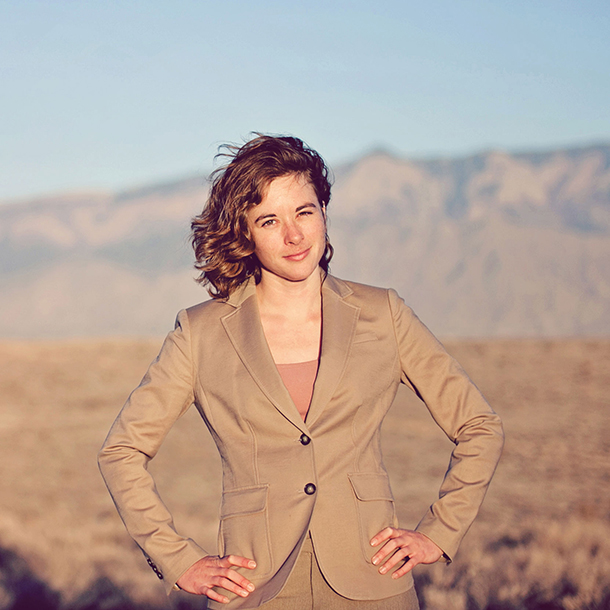 Amaris Ketcham teaches writing and interdisciplinary studies at the University of New Mexico Honors College. Her essay “Urban Foraging” is featured in the new collection Coming of Age at the End of Nature. (Photo: Stephanie Stewart)

I think maybe we view urban life as a series of destinations, and going from one destination to another destination, and not stopping en route to communicate with people. If you're on foot more, if you bicycle more, you start interacting with the route more than you interact with the end of the route. You know we inhabit an artificial reality for the most part. I live in an urban area. It's man made, and by artificial, I just mean that it's man made. I don't mean that it's negative or false somehow. The idea that we've built buildings, we landscape our yards, that's not very different from what say prairie dogs do. You don't say prairie dogs are living at the end of nature because they have tunnels and burrows and mounds. And so I think that we are just living in a moment of change, in how we understand nature. However, that doesn't mean that nature is ended or gone.

CURWOOD: Amaris Ketcham teaches at the University of New Mexico. Her essay on Urban Foraging is part of the collection “Coming of Age at the End of Nature, A Generation Faces Living on a Changing Planet.”


Falling Fruit is a crowd-sourced map of global foraging spots

Here in Boston, the League of Urban Canners provides resources for foragers