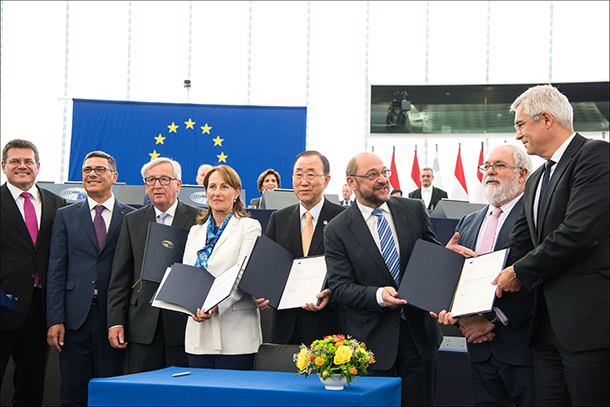 The European Parliament’s approval of allowing member states to officially join the Paris Agreement pushed the landmark climate accord over the critical threshold to allow it to enter into force. (Photo: © European Union 2016 - European Parliament, Flickr CC BY-NC-ND 4.0)

The Paris Climate Agreement has reached the key threshold of ratifying parties to enter into force before the UN’s November Conference of the Parties in Marrakech, Morocco. Prof. Robert Stavins, head of the Harvard Project on Climate Agreements, puts this achievement into context with host Steve Curwood and previews the many tasks negotiators and nations face as the Paris Agreement officially becomes international law on November 4.

CURWOOD: It’s Living on Earth, I’m Steve Curwood. The formal ratification of the European Union on October 7 brings the Paris climate agreement above both thresholds needed to come into force. More than 70 nations representing over 56 percent of total global warming emissions have now acceded, to use the formal word, and in 30 days it becomes international law. That’s just in time for the Agreement’s first meeting of the parties beginning November 7th, as part of the UN climate treaty summit in Marrakesh. Then each ratified country’s Intended Nationally Determined Contribution – or INDC – will be formally registered. It’s no accident that date was chosen, according to Robert Stavins, the Kennedy School professor who directs the Harvard Project on Climate Agreements, and Rob Stavins joins us now.

Welcome back to Living on Earth.

STAVINS: It's good to be back with you.

CURWOOD: So, why was it especially important for the Paris agreement to become international law, to enter into force at this moment?

STAVINS: Well, the reason why it's actually particularly important is because of the US presidential election. The Republican candidate, Mr. Trump, he has phrased it once that he would walk away and other times he has said he would renegotiate the Paris agreement, but it appeared that what he would do be something on the order of rescinding the INDC that was submitted, which, if the Paris Agreement had not yet come into force, the administration could do that, they could change it at any time. But, given that the Paris agreement is now coming into force, the reality is that there are rules about being removed from this international agreement. 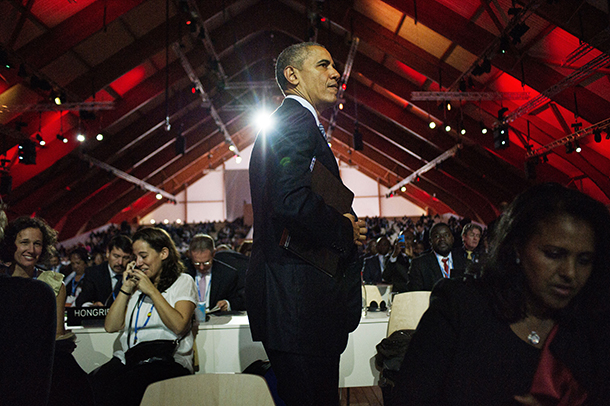 Although President Obama -- seen here at COP21 in Paris -- will leave office this January, the U.S. role in the Paris Agreement is secured no matter which candidate is elected to the White House. (Photo: Benjamin GeCOP PARIS, Flickr public domain)

After a country announces its intention to leave the agreement, there is a delay of three years before the process starts, and then the process itself takes one year. In other words, it’s a total of four years. That mean that, if the agreement has already come into force, it would be impossible for a President Trump to remove the United States during what would be his first term; therefore, there was a tremendous amount of enthusiasm and interest around the world, to make sure that the Agreement came into force this calendar year, essentially before Inauguration Day.

CURWOOD: Now that this has come into force, it means that Marrakesh will be able to assemble the meeting of the parties, what is expected to happen at the first Meeting of the Parties of the Paris climate Agreement?

STAVINS: Well, it means that in Marrakesh, that they'll begin to get down to the difficult work of putting flesh on the bones of the Paris agreement. I mean, the way I think of these is that these international agreements -- In this case, what is it? About 13 pages long -- is not very different than the preamble of a statute that has been passed by the Congress and signed by the President. But then there're the hundreds and hundreds of pages that come after it. There are the regulations that have to be promulgated in order to have a statute have any kind of effect. That's what is going be taking place starting in Marrakesh. And the reason why it's significant, it’s actually very impressive, is that the same threshold for it to come into force applied in the case of the Kyoto Protocol, 55 countries representing a minimum of 55 percent of global emissions. It took fully five years after 1997 for that threshold to be accomplished, and this time it's happened in less than a year, so it means they are going to be able to get to work much more quickly than otherwise would have been impossible on the real meat of the agreement. 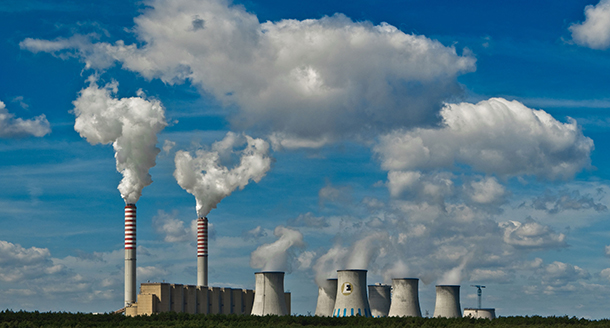 Among the 28 European Union member states, Poland is finding it particularly difficult to reduce its emissions. Approximately 85% of its energy comes from coal, burned at power plants like the massive Bełchatów Power Station (above). (Photo: VLLI, Flickr CC BY-NC 2.0)

CURWOOD: Talk to me about the major rules of the Paris Agreement that negotiators are going to have to resolve.

STAVINS: So, there are a whole set of issues that are going to have to be dealt with certainly in terms of reporting and verification. What's the role of the Secretariat of the United Nations framework convention on climate change? How will they do that? This stock-taking that is supposed to happen every five years, where they add up what's been accomplished and what hasn't been accomplished, what's the procedure for that? How will they ensure, if possible, what is a promise of the Paris Agreement, and that is that each five years when the parties, the 197 countries, submit a new Intended Nationally Determined Contribution, how will they ensure that it actually is more ambitious? And then there are a set of very difficult issues around what's been controversial in the Paris agreement and that is Article 6, which is where carbon markets under the new Agreement, that's where they would fall, and a tremendous amount of work is going to have to be done to make that a reality.

STAVINS: Well, that's a difficult one. Had it been that the European Union was not able to ratify the agreement in time, then the delegates were already clear that they were going to make sure that Europe was informally involved, and they'll do the same with other major countries.

CURWOOD: So that means “observer” status?

STAVINS: That's correct. I mean, remember that was the status of the United States and still is under Kyoto.

CURWOOD: Indeed. We don't get to deliberate, but we can watch and comment even. 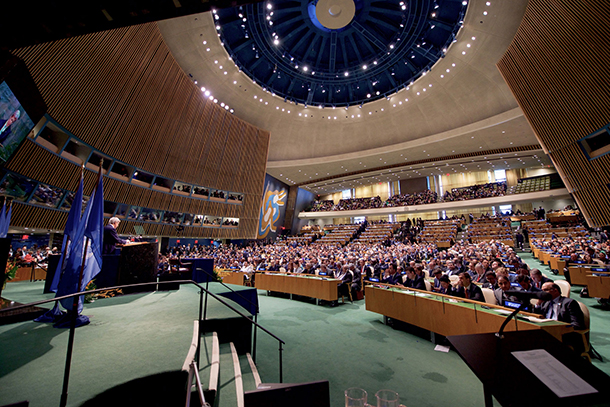 Before countries could ratify, they had to sign the Paris Agreement document. Secretary of State John Kerry signed for the United States on Earth Day 2016 at the United Nations headquarters in New York. Delegates from 174 nations signed that day. (Photo: U.S. Department of State, Flickr public domain)

STAVINS: That's right, and one can have a lot of influence whether or not one actually casts a vote certainly.

CURWOOD: So, how pragmatic is the Paris Agreement, given that the Intended Nationally Determined Contributions those INDCs don't get is terribly close to keeping warming to below two-degrees Celsius?

STAVINS: Well, actually if I had to choose one word to describe the Paris agreement, it would be the one you just used, Steve. I would say it's “pragmatic”. It's not the type of aspirational agreement that the Kyoto protocol was. It is pragmatic. It is based upon what's politically feasible in each of the countries. That's the whole nature of this hybrid architecture of combining top-down elements for monitoring, reporting, verification, and coordination with bottom-up elements of each country saying not what it hopes to do and then going back home and trying to get it through the Parliament or the Congress, but starting with what it believes it can do and then submitting that as their INDC. Where these things really bind is domestically, at least in a representative democracy. 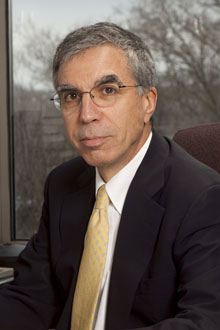 What's binding are the set of individual policy elements which is what the Obama administration and a Clinton administration would use in order to achieve the numbers that are in the INDC, the 26- to 28-percent below 2005 level of emissions.

CURWOOD: So this is all about what a country can do on its own, as opposed to being required internationally.

STAVINS: That's right. I mean, there is not a requirement to accomplish particular targets. There are requirements essentially to participate and to submit the numerical targets.

CURWOOD: Now, some people are concerned that the US is really giving up a fair amount of sovereignty, this is moving us towards world government. Your response?

CURWOOD: Robert Stavins leads the Harvard Project on Climate Agreements and is a professor at the Kennedy School of Government. Thanks so much, Rob, for taking the time with us.

STAVINS: It's always a pleasure to be with you.

The significance of “CMA1”, the first meeting under the Paris Agreement

Read Robert Stavins’ blog, “An Economic View of the Environment”