The Fillery: Shopping Without Waste 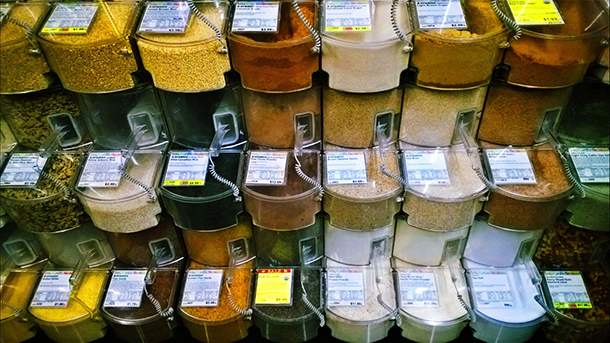 Many of the bulk food stations at the Fillery will look similar to this one. (Photo: Sara Stasi, Flickr CC BY-NC 2.0)

Modern packaging means that shoppers often need to buy a 4-pound bag of specialty flour when they only need one cup for a recipe. So Sarah Metz has founded the Fillery, a new store focused on reducing waste, due to open in Brooklyn later this year. Metz explains to host Steve Curwood that at the Fillery, shoppers will bring their own reusable containers and only buy what they need.

CURWOOD: Now if you’re like most people, you probably have a fridge and cupboard with a number of half-used packages. Even if you only need a cup or two of some ingredient, it comes by the pound or quart, and all too often eventually what’s left goes stale and into the garbage. That waste was part of the reason Sarah Metz decided to launch a store called “The Fillery.” It’s designed to reduce waste and save money, and its doors are expected to open in Brooklyn later this year. You see, at the Fillery, shoppers will bring their own reusable containers and only buy what they need. Sarah Metz joins us now. Welcome to Living on Earth.

METZ: Thank you for having me, Steve.

CURWOOD: So, this sounds a little like my old co-op, bring your container to get what you need.

METZ: Fantastic. Yes, a lot of co-ops do have a bulk section, unfortunately many of them don't have the ability to allow their customers to bring their own containers. 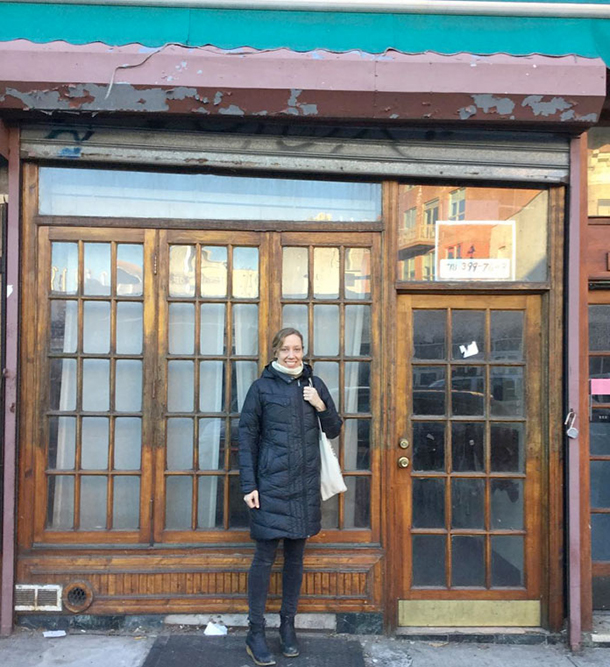 CURWOOD: So, tell us about the Fillery. What kinds of goods are you planning to sell?

METZ: We'll have everything from nuts and seeds to baking ingredients, whole grains, coffee and tea, probably more than 100 different spices and we'll also have liquids like syrup and oil and vinegar, even a few household cleaning products will be available for refill.

CURWOOD: How about milk as well?

METZ: Well, milk not for refill. There is a farm in the region that does milk in glass bottles, kind of like the old days. You return your glass bottle and then you get a bottle of fresh full milk. 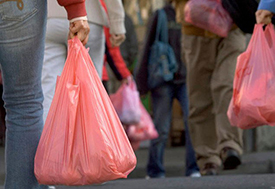 At the Fillery, customers will bring reusable containers instead of being given disposable plastic ones. (Photo: Day Donaldson, Flickr CC BY 2.0)

CURWOOD: Maybe even a milkman too.

CURWOOD: Now, what about fresh produce. What will you have along those lines?

CURWOOD: Any markup there?

METZ: We haven't decided that yet, we want to keep it as affordable as possible, and I really want the farmer to benefit of course from this. We're still investigating those options.

CURWOOD: What inspired you to open the store?

METZ: I've been an eco-conscious person for a long time, and I moved to Brooklyn about 10 years ago and when I saw the amount of waste being generated in New York City I was just shocked. I thought back to a store I shopped at in Michigan and it was a small bulk store and I really love that concept and still after 10 years of living in my neighborhood nothing like that exists, so I just decided to do it myself.

CURWOOD: So, how much waste do stores typically produce, Sarah? I mean, what are talking about here?

METZ: Right. That varies quite a bit depending on what type of store you're talking about or what type of business, but a report that was in Politico I think released just a couple months ago estimates that waste collection trucks haul approximately 10,000 tons of business waste every single day in New York City, so you can imagine there are ... probably a very conservative estimate would be 100,000 businesses so about 200 pounds per business per day on average.

CURWOOD: That's a lot of waste. I guess Oscar the Grouch must love New York City.

METZ: [LAUGHS] He must enjoy it there.

CURWOOD: So, how much do you expect to reduce food waste? We see figures that about a third of all food is wasted one way or another.

METZ: Right. I think that teaching people to buy only what they need is going to be a big part of that. Community education is a big part of what we hope for the Fillery to offer and part of that will be teaching people how to plan their meals and how to buy in quantities that are usable for them before the product goes bad. So we are hoping that that will contribute to reduction of food waste.

CURWOOD: So what do you think other businesses can learn from what you're doing here?

METZ: One of the problems with waste in terms of the business contribution is really generated at the supply chain level. So when we order products that we want to offer customers there of course is lots of packaging waste and so that is not necessarily always waste that is seen by the consumer, but that is waste that the business has to deal with. I hope that other businesses will start to look at that and be more vocal with their distributors and their suppliers in addressing the packaging waste problem in terms of the shipment. So often I receive an order that I placed online and it's a tiny shoebox in this huge box with all these airfield pouches, and it's just so unnecessary and so wasteful. So I do hope that more businesses will be more vocal to the supply chain.

CURWOOD: Sarah why do you think food packaging waste is such a problem? 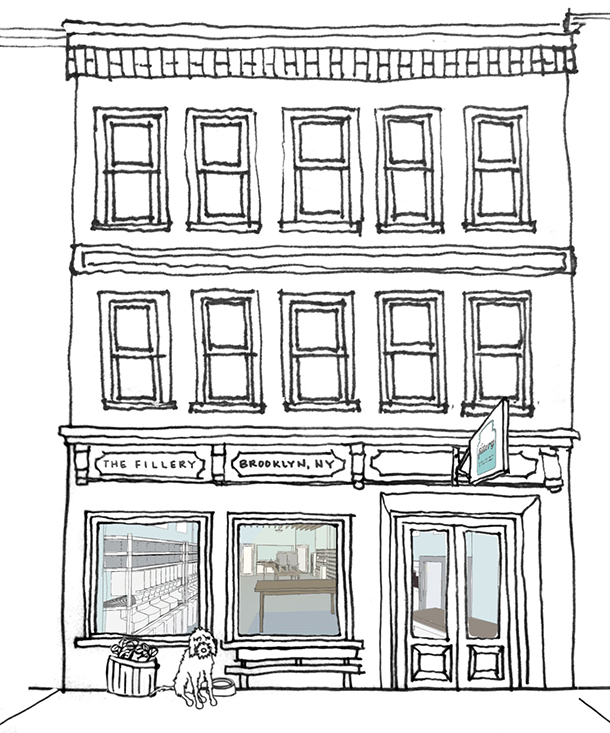 An illustration of the Fillery’s storefront (Photo: Stephanie Metz)

METZ: Well, in a place like New York, life is very fast-paced. People are looking for fast and easy things so a lot of times that's something that is packaged in many different layers. I think one misconception is that that also means a fresher and cleaner product when this is not necessarily the case, so what they don't realize is that a packaged food item has been sent from the producer to the packaging facility and then from there to another facility and then to the distributor. A lot of the shelf life for a packed item of has been eaten up just in transport, whereas this is not the case when they are buying it from the bulk store.

CURWOOD: Hey, what will you do when people come to your store without containers? I mean, it's likely to happen.

METZ: It is very likely to happen and I think that's one concern that many people have is just the feasibility of carrying around their own containers if they're not necessarily planning to go grocery shopping. We will have compostable paper bags available for dry goods for free for all customers. We will also have other containers for purchase so everything from jars and tins and bottles for the liquids - nothing plastic.

CURWOOD: So, Sarah, you're an entrepreneur and entrepreneur equals challenge, so what are the challenges that you are facing so far?

METZ: One of the biggest challenges so far has really been researching this type of business because a business like this so far doesn't really exist in the US, not with the same ideals and the same business model. They have been very successful in Europe, but researching the feasibility of a store like this in the US has been difficult because there's very little to compare it to.

CURWOOD: So, what kinds of responses have you received to the notion of the Fillery?

METZ: The response has really been fantastic, and I have to say somewhat overwhelming. I certainly didn't expect this much attention. Emails just about every day from residents in the community wanting to help out in whatever way they can, from people offering their services, everything from architecture to design services, so it really has been a fantastic response.

CURWOOD: How does a store like yours help community?

METZ: I very much want it to be a place where community enjoys being, a sort of a gathering place, whether it's in my store to learn new recipes or starting dinner clubs at their homes and then cooking again and spending time together in that way.

CURWOOD: Or I imagine learning how to reduce food waste?

CURWOOD: You're planning to offer workshops. What are you talking about?

METZ: Well, we recognize that offering people tools and resources doesn't really go very far unless you teach them how to use them, so we will have a variety of workshops some of them will be free and some of them will be paid workshops. We will be bringing in people from the Department of Sanitation in New York and from recycling organizations to help people understand how to sort their waste properly. That is one problem. Recycling rates are very very low. A huge percent of waste that goes to landfills could actually be recycled, and so a big part of that is education. We will also have local chefs and nutritionists doing workshops on how to cook with items that we have. A lot of the items that we carry will be fairly unique and unknown to people, and so to encourage people to cook with some of the whole grains that they've never used before, we will host workshops on how to do that. 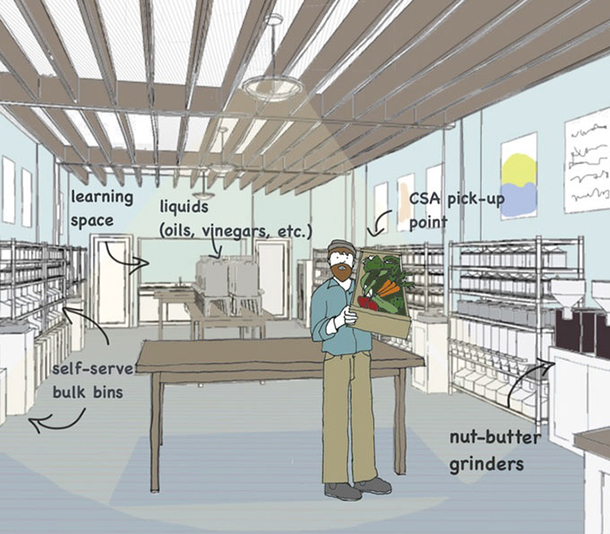 CURWOOD: Sarah Metz is the founder of the Fillery, a novel grocery store that's due to open, well, sometime later this year in Brooklyn, New York. Sarah, thank you so much.

METZ: Thank you so much for having me.