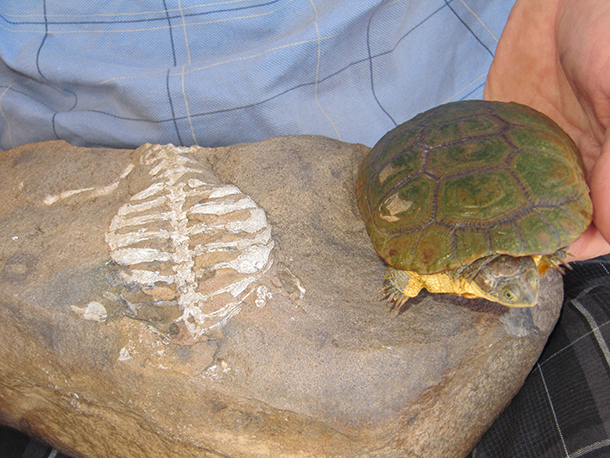 A new fossil found by an eight-year-old boy is helping researchers discern the origins of turtle shells. The specimen suggests that shells arose from an adaptation for burrowing underground and that only later did they acquire a protective function.

RUTTY: Kobus Snyman was just eight years old when he found a fossilized turtle on his father’s farm in South Africa. The fossil he uncovered was 260 million years old.

In fact, it’s a member of the oldest species of turtle that we know of – a partially shelled reptile called Eunotosaurus africanus. This specimen preserves parts of the ancient turtle skeleton that researchers have never seen before. It’s helping scientists at Wits University in Johannesburg piece together the origin of turtle shells – and it’s not for protection, as you might expect.

We already know how turtles evolved to have shells. Unlike other armored quadrupeds like armadillos and pangolins – whose shells are modified scales – turtles developed theirs by broadening the ribs and widening their bones into flat plates.

But scientists say why turtles developed shells is a puzzle. Across time and geography, there’s little variation in the rib cages of four-legged animals, because ribs are vital for breathing and movement. The broadened rib cage in turtles interferes with their lungs and makes walking slower and more awkward.

But Snyman’s specimen points to a possible explanation for this clunky trait: an ancient turtle hand. Big, strong, and clawed, it looks like the forelimb of an animal that digs.

Studying the anatomy and cell structure of other broad-ribbed animals such as anteaters, researchers found that wide rib cages are associated with burrowing. In the arid climate of ancient South Africa, the first turtles likely developed shells as a way to escape the heat underground. The shell’s protective function is just a byproduct – a handy side effect of a trait that evolved for different reasons entirely.


The new study, entitled “Fossorial Origin of the Turtle Shell”: