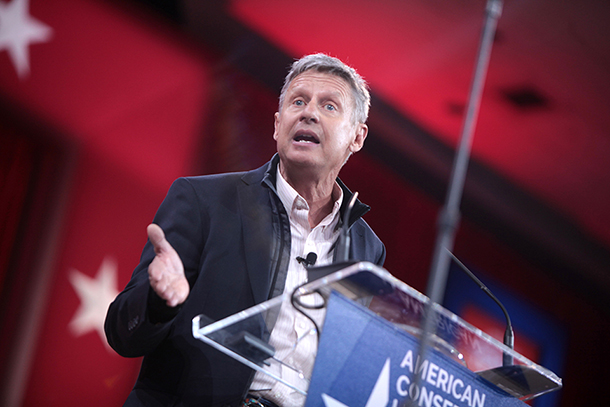 Libertarian presidential nominee Gary Johnson and his running mate, Bill Weld are both former Republican governors who have rebadged themselves as Libertarians. Chip Knappenberger, a scientist with the Libertarian think tank, the Cato Institute, joins host Steve Curwood to discuss how the former New Mexico and former Massachusetts chief executives would approach environment and energy issues if they governed America.

CURWOOD: From the Jennifer and Ted Stanley Studios at the University of Massachusetts Boston and PRI, this is Living on Earth. I’m Steve Curwood. As the US national elections approach we wrap up our review of the environmental records and plans of the presidential candidates with a look at the two Republicans who have rebadged themselves as Libertarians, former Governors Gary Johnson and Bill Weld. Former New Mexico Governor and Libertarian presidential nominee Gary Johnson has said there is “no compromise when it comes to clean air, clean land or clean water,” sentiments echoed by Libertarian vice presidential nominee and former Massachusetts Governor Bill Weld. To drill down on their views we turn to Chip Knappenberger, Assistant Director for the Study of Science at the Cato Institute. Welcome to Living on Earth.

KNAPPENBERGER: Thanks, Steve, glad to be here with you.

CURWOOD: Now, why do you think that the Johnson and Weld campaign has gone for a bare-bones approach, at least as far as their official platform goes when it comes to energy and environment?

KNAPPENBERGER: Sure, I think Libertarian views on federal government in general sort of are akin to maybe what Mies van der Rohe's views are on architecture, which is "less is more". So that is sort of summed up as well, I think, in environment and energy policy put out by Gary Johnson that they're running this time. So he doesn't have a lot to say about it. I think the the Libertarian 2016 party platform has 126 words dedicated to energy and environment, where the other platforms from the other parties are pages and pages of explanation out there. So, it's pretty much a hands-off approach. So he doesn't have a whole lot to say about it.

CURWOOD: Give me the textbook Libertarian position say on polluted water. How would you deal with that as a Libertarian?

KNAPPENBERGER: Well, the Libertarians are big on property rights and individual property rights, and so if someone is trampling upon your individual rights you can litigate that. So I think on issues like pollution, especially when you can identify someone who's causing the pollution and then a harm that comes to you, they prefer that you litigate that with existing laws in the courts. Now, air pollution is a much trickier thing for Libertarians to deal with, and there is no Libertarian stance on how you do that, and various Libertarian scholars have different opinions about how to handle these more nebulous things like air pollution where we all kind of contribute to it.

CURWOOD: Yeah, and of course, that was takes us right to the question of climate disruption. What's the Libertarian perspective on dealing with climate issues? 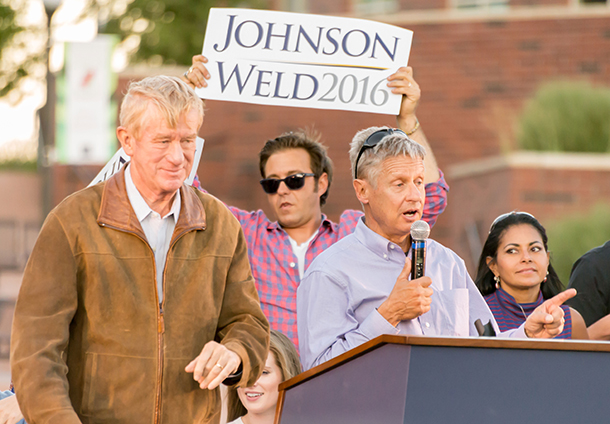 KNAPPENBERGER: Well, I am a climate scientist that works for the Cato Institute, which is a Libertian think tank. My views of climate science are more summed up in the word "lukewarming," that humans are impacting the climate through emissions of greenhouse gases. Those emissions are having impacts but those influences are not as large as being advertised by some of the folks who are more activist in wanting to have government involved in energy and environmental issues. I have a new book out, it's called "Lukewarming" and it's about the science that I think supports that notion that the urgency is not there as far as some people see.

CURWOOD: Now, what would be Governor Johnson's plans for existing environmental regulatory structures such as the Environmental Protection Agency?

KNAPPENBERGER: Sure, I think he has come out and said that the Environmental Protection Agency serves a useful role, especially in protecting water and certain types of air pollution. I mean, if you're emitting smoke out of your smokestack that's a particulate matter, or something like that, you can put a scrubber on it and clean up those emissions. And the EPA's role in that is probably an essential one. I think there's some thought that the EPA is overstepping some of its bounds of the current administration, and Gary Johnson would probably want to roll that back a little bit. The Republicans have put forth the idea that they would disband the EPA or really roll it in a lot, and I don't think he shares those views at all. 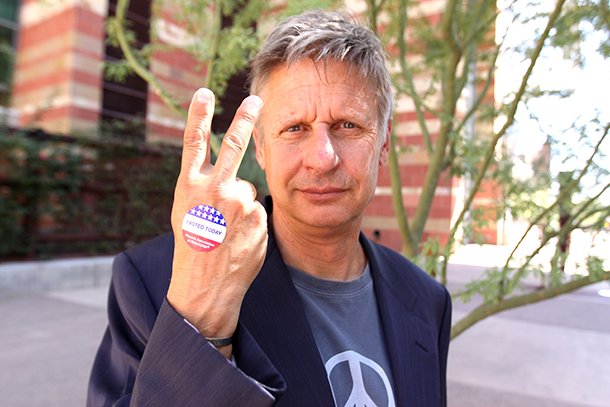 CURWOOD: Now, Governor Johnson's environmental platform states, and I'm quoting here, "Is the climate changing? Probably so. Is man contributing to that change? Probably so." What about his Libertarian philosophy prevents him from taking, say, direct actions to reduce carbon emissions?

KNAPPENBERGER: Well, one of the fundamentals of Libertarian philosophy is they don't particularly like to raise taxes. And so, there's the notion that some folks are saying that there's a Libertarian way to deal with climate change and that is through a carbon tax. Now, Governor Johnson flirted with the carbon tax back in late August or so for a couple of days, and by the end of the week he came around to thinking, it seems good in theory but he's thought through it, and he doesn't think it's going to work well in practice. And that I should say, Steve, is a revenue neutral carbon tax, where you put a tax, you but a price on carbon, and then you give that back through tax cuts or some other sort of way or giving it back. And that's something I think he thought was a Libertarian approach to the issue; however, in the real world that revenue neutral carbon tax probably isn't going to play out very well.

I think we see that happening in Washington State right now where initiative 732 is put before the people as a carbon tax that they are going to vote on. It's a revenue neutral carbon tax, and it's not sharing much support from the left because they sort of think well, we've gone through all the trouble of raising this money, we should use it to promote green initiatives and energy efficiencies and sort of things like that, and they don't want to give the money back. I think that's where probably Governor Johnson has drawn the line is, I think he said, "I've never raised taxes. I don't plan on doing it now."

CURWOOD: Now, as I understand it, Governor Johnson and Governor Weld want the free market to determine the best energy sources for United States. So, in your view, what would our energy portfolio look like down the road if this were to happen?

KNAPPENBERGER: I think that they have come out and said that they would like to just do away with all subsidies for solar, wind, for fossil fuels. So I think they would just level the playing field, if you will, from everybody and if you recognize that, which they do, that humans are causing climate change through carbon dioxide emissions, I think the solutions to those emissions and the solution to that potential issue is technological innovation and adaptation, is how I see it.

CURWOOD: Now, what is Governor Johnson's view on the Paris Climate Agreement and also the Obama administration's Clean Power Plan, which is meant to help the US follow through on the Paris restriction commitments that have been made internationally?

KNAPPENBERGER: Sure, Steve. As as we started off talking here, Governor Johnson has not said a whole lot about this stuff, so I can speculate what that might be, but I have not heard him really discuss it very much. I can't believe he would be for the Clean Power Plan, so I would imagine that under his presidency he would not put a whole lot of efforts to defending the Clean Power Plan in front of the Supreme Court, for instance.

When it comes to Paris, again, what would he do about that is an interesting question. Probably he would not be overly enthusiastic about it, and would probably let things slide in terms of the commitments that we have to it. The commitments only being that we will attempt to try to reduce our emissions in some ways. So, I don't think he's against attempts to reduce emissions. I think he's against heavy-handed, command-and-control federal policies to reduce emissions.

Look, business as usual is leading to carbon dioxide emissions in the United States. Natural gas fracking, for instance, and energy efficiencies are leading to less CO2 emissions, and the role that the federal government has had in that has not been huge, so you can produce new technologies and innovate without a big role of federal government. And so, I think even if you took some of EPA's powers and reeled that in a little bit, you would still see at least a leveling off if not a decline of CO2 emissions from US. I don't think he has to do a whole lot in order to keep the current decline happening. 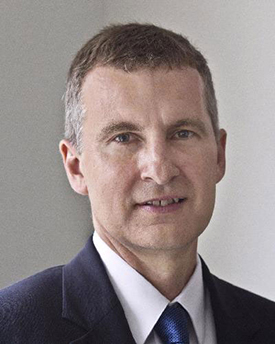 CURWOOD: So, what do you understand about Governor Johnson's views on the natural resources that the federal government has in hand, in particular the national parks and public lands that are iconic and really held for us all?

CURWOOD: Chip Knappenberger is a climate scientist and Assistant Director for the Study of Science at the Cato Institute. Thanks so much for taking the time with us.

KNAPPENBERGER: Sure. It was very good talking to you today, Steve.