Carbon Tax Up for Vote in Wash. State 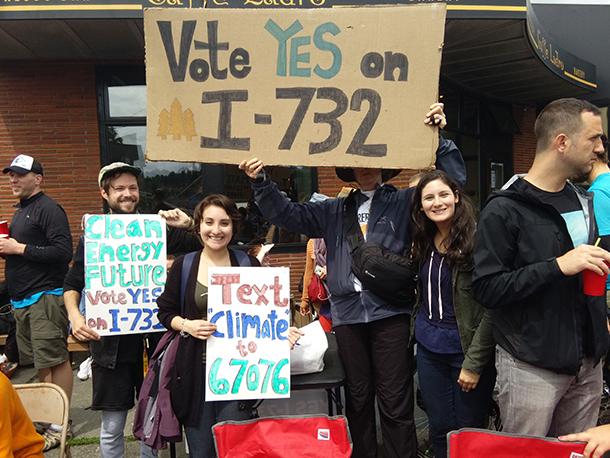 Proponents of the CarbonWa ballot initiative say it’s the most progressive shift in the state’s tax code in 40 years. (Photo: Carbon Washington)

Washington State’s Initiative 732 would enact America’s tax on carbon, if voters agree. Proceeds would go to reduce sales taxes and support local industry, but some environmental justice activists say it would do too little to help the poor or benefit renewable power. Vox writer David Roberts discusses what’s at stake with Living on Earth Host Steve Curwood.

CURWOOD: From the Jennifer and Ted Stanley Studios at the University of Massachusetts Boston and PRI, this is Living on Earth. I’m Steve Curwood. There are some 160 or so ballot initiatives this year across America, with measures to raise the minimum wage, legalize marijuana, and control guns gaining much of the attention. And in Washington state, action on climate change is also on the November 8th ballot in the form of Initiative 732, which would tax carbon emissions. Many folks on the left and right in Washington agree on the need to put a price on carbon, but they can’t agree on how to do it, and they are pulling against each other when it comes to this initiative, though if it passed it would impose America’s first carbon tax. David Roberts writes for Vox online and recently wrote about the tangled political factionalism surrounding the carbon tax referendum. David, welcome to Living on Earth.

ROBERTS: Thanks for having me, Steve.

CURWOOD: Give me the background. What's the story here?

ROBERTS: Well, the short version is an economist PhD by the name of Yoram Bauman founded a group called Carbon Washington, wanted to push a revenue neutral tax swap as they call it and started gathering friends and funders and signatures to get on the ballot, and as of January of this year submitted those signatures, and so the ballot measure will be on the ballot about this year.

CURWOOD: So I gather many folks will see that as a reasonable approach, but apparently not everyone does.

ROBERTS: Yeah, that's right. The other part of the backstory is that there's this other group of environmentalists who have been working to build a coalition in Washington State of various liberal groups including labor, communities of color, low-income groups. That group was intending to put a ballot measure on the ballot this year. Consequently those groups on the left are not supporting it, so what you have is the odd situation of a carbon tax on the ballot that is being opposed by the state Democratic Party, by community of color groups, low-income groups and by most environmental groups. 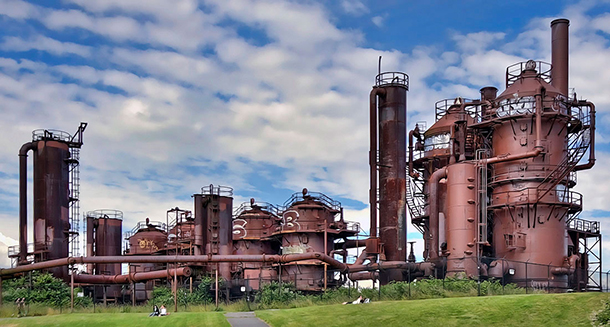 Washington state has a history of leading the environmental charge -- in 1975 architect Richard Haag transformed the site of a defunct gasification plant in Seattle into one of the country’s first post-industrial public spaces, known today as Gas Works Park. (Photo: Michael D Martin, Flickr CC BY-NC-ND 2.0)

CURWOOD: Interesting situation. Please explain for us what you mean by revenue neutral?

ROBERTS: Sure. All the revenue that is gathered by the carbon tax will be automatically returned. By far the biggest chunk is going to reduce the sales tax. So, that's what “tax swap” means. You raise one tax, lower another tax and the government doesn't get any discretionary revenue to spend. So that's why they call it revenue neutral. It doesn't raise revenue for the government.

CURWOOD: Now, you've written that the solution imposed by this plan has a heavy climate-economist bent to it. What do you mean by that?

ROBERTS: Well, economists have always maintained that a price on carbon is the most economically cost-effective way of reducing carbon emissions and so then the big question becomes what do you do with all the revenue, and economists favor reducing other taxes with that revenue. You raise one tax, lower another tax, you don't raise the net tax burden, but now you're taxing things you don't want, carbon, instead of things you do want. So, that's the idea and economists have been advocating for this for years and years and years. This is the first example that I'm aware of where sort of the clean perfect economist-friendly version of this is actually on a ballot somewhere.

CURWOOD: What are the other proposals that the Alliance has put forward?

ROBERTS: Well, the Alliance has been developing its own ballot measure the most striking thing about it is it would also be a carbon tax. They don't disagree with the tax element of this. It would also be a fee on carbon, but theirs would be revenue positive i.e. all that revenue would go to the government that it could then have discretionary power over. So what do they want to do with the revenue? First they want to spend it on social justice which means the Working Families tax credit, it means worker transition programs, worker retraining. When that's taken care of then they divide the remaining money into 70 percent goes to clean energy and 20 percent would go to clean water and two percent would go to healthy forests. But in terms of the big picture, I think the difference here is that the Alliance program would be a massive government-spending program. There's no two ways about it. It would be a massive government-spending program funded by a carbon tax. That's the whole core of the difference. Carbon Washington thinks the price on carbon will be sufficient. So they think that their solution, that this revenue neutral carbon tax does serve social justice. So the big dispute here, the big policy dispute is A: what's the best way to serve social justice and B: who decides? 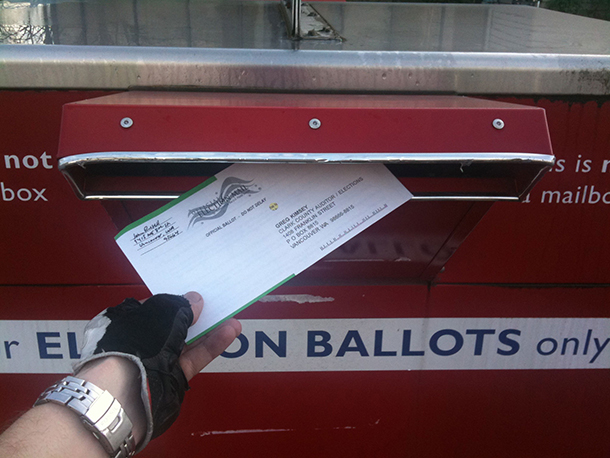 CURWOOD: So these folks on the left say there is not enough economic or social justice in this measure are opposing it. What does that mean for the prospects for Washington to become the first state to have a carbon tax?

ROBERTS: Well, the betting money, still, I think among political professionals is that it's going to lose. Its yes numbers have crept up a little bit, but it's still got a large number of undecideds and that's still a grim scenario. The big question, of course, is could they have persuaded more of those undecided voters if the big left groups had swung around behind this measure and spent a bunch of money on it and spent a bunch money to get the word out. So if you ask the Alliance, they'll say this measure was doomed from the start, nobody could've saved it. If you ask Carbon Washington, they'll say, it's a tight race and we could've won this if these left groups had supported it.

CURWOOD: David, how does this proposal, how does this referendum question compare to other carbon taxes that are out there. I'm thinking particularly of British Columbia which already has one.

ROBERTS: Sure. British Columbia is sort of the inspiration or the model, but this carbon tax as proposed is far stronger than any tax in North America and would be one of the strongest, most powerful in the world. So, for instance, British Columbia's was set to rise up to $30 and then plateau there, and then stay there. This carbon tax is set to keep going and going until it reaches $100 a ton. That will probably be mid-century sometime, but it in terms of just the sheer level of the carbon price, it would get up to one of the highest carbon prices in the world. To find a carbon price higher than $100 dollars a ton you would have to look to Sweden.

CURWOOD: How will the debate over this initiative inform other states who are thinking about carbon tax plans of their own?

ROBERTS: One of the premises of Carbon Washington is that they wanted to put forward a policy that other states could adopt and their sort of political rationale is if we do what the alliance is trying to do which is just gather all the left groups together, that might work in California, maybe in Washington, maybe in Oregon but in most states, the left just isn't strong enough to pass policy on its own, the left just can't do it on its own. So if we're going to make a model for other states, it has to be a model premised on bipartisanship. So my worry is that this carbon tax going down to defeat is going to send a strong signal that's going to accelerate what is already extreme polarization on this issue.

CURWOOD: To what extent is this dispute creating a backlash against the left enviro-groups? Those groups are often criticized as using the environment as a Trojan horse for income redistribution and other social things. 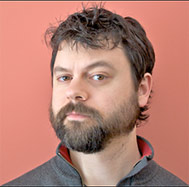 ROBERTS: Traditionally the environmental movement in the US has been dominated by mostly white people, but even more than that, mostly affluent well educated people, and I think people like that tend to dismiss the needs that these communities have as sort of that they're just grubbing for handouts or something, that this is all kind of a sideshow, that all that really matters is carbon, carbon molecules, reduce carbon, that's the only thing that really matters, and I think what these communities are trying to convey to people is the climate movement has got to become a climate justice movement if it wants to succeed. It cannot just focus on carbon, it's got to focus on justice and fairness. Is it just about reducing carbon molecules or is the climate movement giving these groups a place at the table? And this is of course something that is inevitably going to bedevil national climate action as well. The same fight that’s going on here is going to be replicated I think almost everywhere you see climate policy being developed.

CURWOOD: David Roberts is a writer at Vox.com. Thanks so much for taking the time with me, David.

ROBERTS: Thanks a lot.

CarbonWa: “Carbon taxes are even better than you think, Part III: Social Justice”

The Alliance for Clean Jobs and Energy