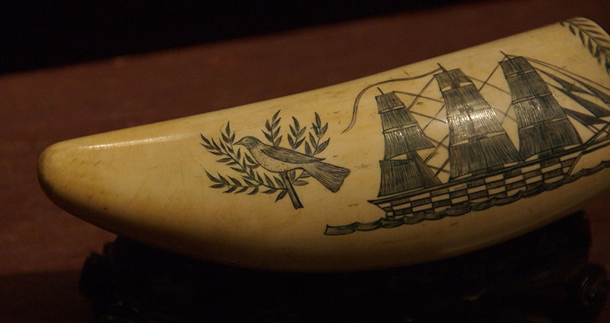 Engravings on scrimshaw from the Maritime Museum of British Columbia, Vancouver, BC. (Photo: A.Davey, Flickr CC BY 2.0)

Oregon voter will decide Measure 100, which would ban the buying and selling of various illegal animal products. As EarthFix reporter Jes Burns explains, the twelve species the measure would cover are at risk of extinction and poached internationally at high rates. But opponents of the measure say the lack of funding means it promises more than it could deliver.

CURWOOD: It’s Living on Earth, I’m Steve Curwood. Oregon voters this November will decide whether to ban the buying and selling of animal products like ivory, and jaguar skins. The 12 species covered under ballot measure 100 are being poached internationally at high rates and many are threatened with extinction. Supporters say Oregonians could do their part in the fight against animal trafficking with a “yes” vote, and if the measure passes, Oregon will join its neighbors, California and Washington, in having such a state law. But there are some questions about just how effective the Oregon Measure would be. Jes Burns of Oregon Public Broadcasting and EarthFix has the story.

BURNS: Back in the 1970s, Gens Johnson got really interested in hand-made and regional art. She started to buy pieces from shops in Portland and across the Northwest.

JOHNSON: I bought two pieces that were scrimshaw, and they were done on whale ivory and walrus tusk.

BURNS: Scrimshaw is a kind of carving – typically of boats and sea life. It was popularized by whalers in the 1800s. Johnson estimates hers were made in the 1960s or 70s.

JOHNSON: I was concerned when I bought it that it wasn’t elephant ivory, and I really didn’t think there was any problem with it being a sea mammal product.

BURNS: She gave the two pieces to her parents as a gift, considering the art a long-term investment.

JOHNSON: Someday I will inherit those, and I really don’t have … pinned any great gain on selling them, but I’ve always felt that would be one of my options.

BURNS: Under Measure 100, that option would go away. Her whale scrimshaw would be subject to a ban on buying and selling because it was made less than 100 years ago. Johnson is actually okay with that. But this dilemma gets to the measure’s larger question. 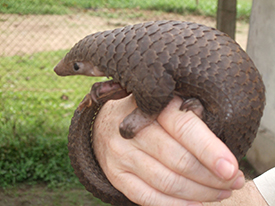 A young Pangolin, one of the animals protected under Measure 100 (Photo: Valerius Tygart (Own work) [CC BY-SA 3.0], via Wikimedia Commons)

BURNS: Scott Beckstead is Oregon Director of the Human Society of the United States, the main financial backer of the campaign. He says there are exceptions, many of which follow federal law that is already in place. For example, vintage musical instruments, like ivory-keyed pianos, and older antiques with established provenance. The animal trafficking measure would also allow items to be passed down through inheritance. The goal, says Beckstead, is to take away the economic incentive.

BECKSTEAD: Once the smugglers get items into Oregon, there is no state law to prevent those items from being bought and sold.

BURNS: Right now, federal agents are the only ones looking for trade in animals like tigers, whales and rhinos here. U.S. Fish and Wildlife Special Agent Sheila O’Connor is one of only four agents assigned to the entire state. She says wildlife trafficking is alive and well in Oregon and more officers would help.

O’CONNOR: We can’t be everywhere, we can go into every store, we can’t view every online page offering things for sale here in the state of Oregon. So if a state makes trafficking illegal, then we have a lot more eyes in the marketplace.

BURNS: The U.S. Fish and Wildlife Service does not have an official position on Measure 100. A recent report by the wildlife trade monitoring organization TRAFFIC shows ivory availability dropping in states that have banned sales. The study examined six U.S cities and among them, Portland, Oregon was flagged as having the second highest amount of ivory on the market. If the wildlife trafficking measure passes, that stands to change. Oregon would join Washington and California in having similar bans, says Beckstead.

BECKSTEAD: If we can get Measure 100 passed, then the entire west coast of the U.S. suddenly becomes far less hospitable to the smugglers.

BURNS: But how effective that united front will be really depends. Washington’s voter-approved ban passed by a landslide, and has been in effect less than a year. Deputy Chief Mike Cenci of the Washington Department of Fish and Wildlife says his officers have added the banned animals to their watch list.

CENCI: But as far as putting together an operation and starting to focus attention on a known trafficker, we’re a long ways from doing that in effective way that address species beyond our local critters. 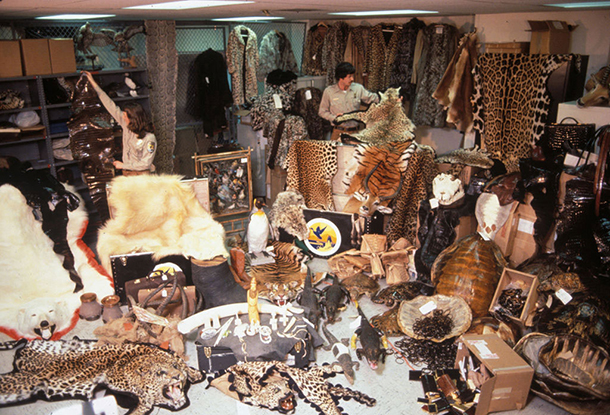 BURNS: A big reason? Washington’s measure didn’t include additional funding to enforce the ban. Oregon’s doesn’t either. Officers would be relying on the same staffing and budgets they use to enforce the rest of the state’s wildlife laws. Given this, it’s unclear whether Gens Johnson and her whale ivory scrimshaw would ever come under scrutiny.

JOHNSON: It feels to me like overkill – no pun intended – in terms of making it a law without the ability to increase enforcement.

BURNS: There hasn’t been any formal opposition to Oregon’s wildlife trafficking measure. And even Johnson, whose family art collection stands to lose value, says she supports the intent of the measure to conserve these iconic animals. For Living on Earth, I'm Jes Burns.

Dr. Mark Trexler of the Climatographers, on the complications of Measure 100