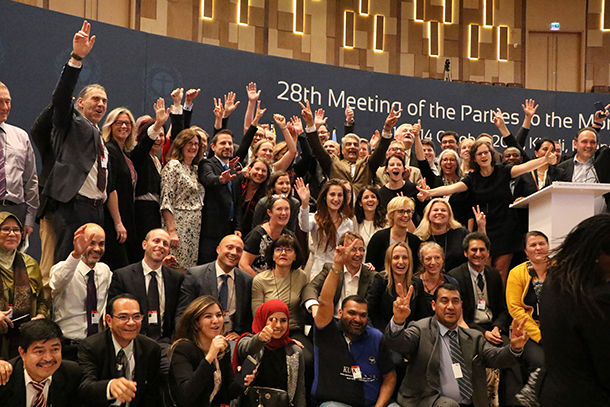 Negotiators at the 28th Meeting of the Parties to the Montreal Protocol in Kigali, Rwanda celebrate the adoption of the Kigali Amendment, a plan to phase out the use of climate-disrupting hydrofluorocarbons. (Photo: Rwanda Environment Management Authority, Flickr CC BY-ND 2.0)

In 1987, nations agreed to phase out stratospheric ozone-harming chemicals called CFCs under the Montreal Protocol. But the replacement compounds HFCs turned out to be powerful greenhouse gases, so now countries have agreed to phase these chemicals out under the same international agreement as well. Nobel prize recipient Dr. Mario Molina discusses with host Steve Curwood the risks HFCs pose to the climate and the international decision to stop using them.

CURWOOD: The Montreal Protocol has been hailed as one of the most successful international treaties in history. It was forged in the late 1980s to phase out CFCs, or chlorofluorocarbons, chemicals used in refrigeration that destroy the ozone layer that shields Earth from cancer-causing ultraviolet radiation. But ozone-harming CFCs were replaced with hydrofluorocarbons, or HFCs, that don’t harm ozone, but are potent greenhouse gases, up to a thousand times stronger than carbon dioxide. So this October, negotiators agreed to replace HFCs with chemicals that are both ozone and climate-friendly. One of the first scientists to discover the dangers of CFCs for the ozone layer was Mario Molina, who shared the 1995 Nobel Prize for chemistry for his work. Mario Molina now teaches at the University of California, at San Diego, and joins me. Welcome to Living on Earth. 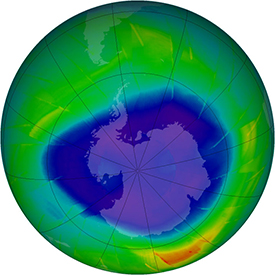 MOLINA: Thank you, I’m glad to be in your program.

CURWOOD: So, what exactly have the world's nations agreed to do the curb HFC use?

MOLINA: What the nations have agreed to do is not to manufacture industrially this chemical, which does not occur naturally. It has been manufactured to replace the CFCs, chlorofluorocarbons that do affect the ozone layer and the Montreal Protocol -- the agreement was to ban the production of those chemicals for the sake of protecting the ozone layer. What the Kigali Agreement does it no longer deals with the ozone layer but now with climate change because the HFCs, they have this problem of affecting instead the climate.

CURWOOD: Now, there three different tracks for nations under this agreement. How does that work and how fair do you think is this differentiated burden?

MOLINA: I think it works. It's the way to get all the nations to agree to this Agreement and the reason perhaps is best explained by using India as the example because they claim they cannot replace the HFCs that they are using now very soon because they would not allow their many families or poor families to have air conditioning because the replacement is a bit more expensive and because the new compounds are not yet available. With the original Montreal Protocol, there were some funds called the multilateral funds that were already useful helping developing nations enforce the Montreal Protocol and ban CFCs, they just had a longer time to be able to do that, and they have resources from developed countries. So the same thing has happened with the Kigali agreement, again, now for climate change rather than for the ozone layer.

CURWOOD: Tell me, how much do HFCs presently warm the atmosphere and how much warming will be avoided because of this phase-out under this agreement?

MOLINA: At the moment they do not contribute very much because the main contributor is carbon dioxide and methane and other compounds. But the big worry is that as the world develops, you are talking about India versus China, and many other developing countries, as they become more wealthy, they will use more and more air conditioning, and without the Kigali Agreement, they would use HFCs, and so the expectations, looking at projections how much HFCs will be produced. You would avoid something like half of the increase in the temperature by mid-century because of this new agreement. 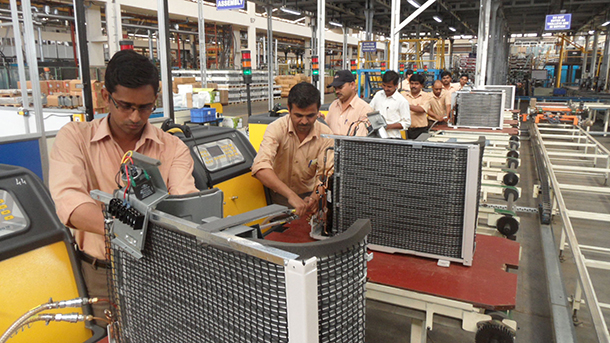 CURWOOD: So that's a half a degree Celsius we're talking about.

CURWOOD: So in round numbers that's almost a full degree Fahrenheit difference.

CURWOOD: Now to what extent have businesses been involved in the HFC phase-out effort?

MOLINA: Well, the chemical industries, as was the case with the CFCs, at the very beginning they are supposed any action because they thought the science was not established, but this is just history now. The science became very well-established and the industry, then the chemical industry they agreed to collaborate, and agreed with the Montreal Protocol phasing out CFCs and they designed other compounds. So it's the same companies and a few more that are now investigating and exploring another set of compounds that you can use for air conditioning but are not global warming agents.

CURWOOD: How easy is it to replace hydrofluorocarbons with other chemicals in cooling systems?

MOLINA: Well, the HFCs can indeed be replaced in the same manner that the CFCs were replaced. The industry investigated and developed replacements, so the expectation is that industry will come up with cheaper alternatives, but even at the present time I insist there are many air conditioners that function very well with other refrigerants and you need perhaps better designed air conditioners. The air conditioners themselves consume quite a bit of energy if they have not very well manufactured. So that's another part of the story. 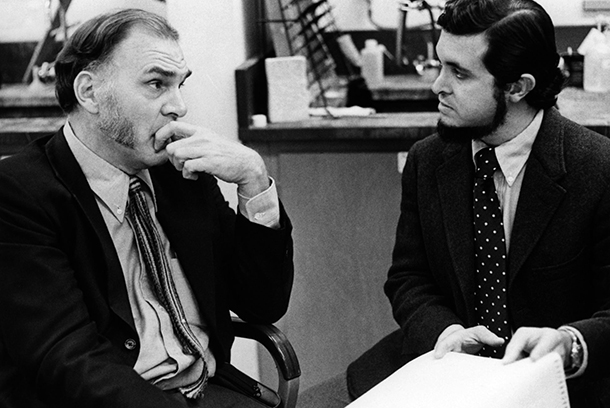 In 1974 chemist Frank Sherwood Rowland (left) and his post-doctoral student, Mario J. Molina, suggested that chlorofluorocarbon molecules would be broken down by ultraviolet radiation in the upper atmosphere, release chlorine atoms, and thereby cause the breakdown of ozone. (Photo: UCI UC Irvine, Flickr CC BY-NC-ND 2.0)

CURWOOD: What are those other refrigerants that work at this point?

CURWOOD: By the way I want to ask you, when did scientists recognize that the hydrofluorocarbons which replaced the ozone-depleting chlorofluorocarbons we're damaging in their own way namely adding to the greenhouse effect? 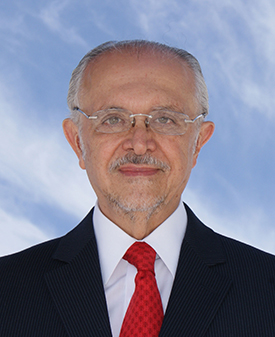 MOLINA: Well, it was actually Professor Ramanathan at the University of California, San Diego who first pointed out that the CFCs themselves are greenhouse gases. That's why the Montreal Protocol, because they banned CFCs, did more for climate change than the Kyoto Protocol or even the beginning of the Paris Agreement. So, it was not surprising that the HFCs are also climate agents. You have to not just measure how strongly they absorb infrared radiation but you also have to deal with their lifetime. How long will they remain in the atmosphere?

CURWOOD: How long do they last?

MOLINA: Well, there are several different ones, but they last of the order of 10, 15, 20 years, comparable to methane, the longer lived ones. But CO2 lasts, some of it, after it's been emitted, is absorbed by the oceans, but maybe one-third of it remains for a millennium, so carbon dioxide is very much longer lived.

CURWOOD: UC San Diego Professor Mario Molina is a recipient of the 1995 Nobel Prize in Chemistry. Thank you so much, Professor Molina.

MOLINA: Thank you. I'm really glad to be on your program.


European Commission on Climate-friendly alternatives to HFCs and HCFCs

NASA: What the ozone layer would look like if CFCs hadn’t been banned