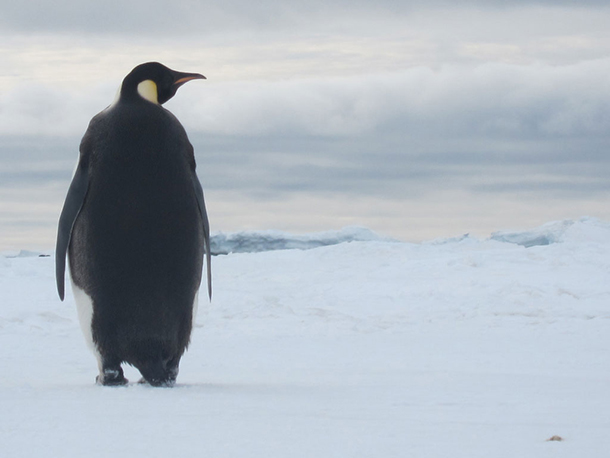 In late October, international negotiators established the world’s largest marine protected area in the Ross Sea, off the coast of Antarctica. Mike Walker of the Antarctic Ocean Alliance and host Steve Curwood discussed the significance of the deal that led to the 600,000 square mile reserve and the importance of preserving one of the most pristine marine ecosystems on the planet.

CURWOOD: From the Jennifer and Ted Stanley Studios at the University of Massachusetts Boston and PRI, this is Living on Earth. I’m Steve Curwood. We begin our program today with remarkable news from the growing movement to protect the oceans of the world. A newly created marine sanctuary off West Antarctica is the largest such reserve in the world, and the first of its kind in international waters. On October 28, the EU and the 24 nations of the Commission for the Conservation of Antarctic Marine Living Resources, known as CCAMLR, agreed to protect some 600,000 square miles of the Ross Sea, perhaps best known for its Emperor penguins. Now, some of the richest and most pristine parts of the Southern Ocean will be out of bounds for fishing and development for the next 35 years. Mike Walker, Program Director for the Antarctic Oceans Alliance, was at the meeting in Australia and joins us now. Mike, thanks for coming on the show.

WALKER: Thanks, Steve. It's good to be here.

CURWOOD: So, I understand that this particular area of the ocean, the Ross Sea, well, has an enormous impact on marine life around the world. What happens there that is just so significant?

WALKER: The Ross Sea is considered to be that of healthiest body of water on the planet. Perhaps people are familiar with the charismatic species that we find down on the Antarctic, of course, penguins, seals, killer whales.

CURWOOD: So, if it's the healthiest part of the ocean, it's the one I guess that has the fewest humans.

CURWOOD: Now, what's going to happen in terms of what's allowed now on the Ross Sea Protected Area? People fish there...I think they like the Antarctic Toothfish which is sold as the Chilean sea bass. It’s been a pretty lucrative business. 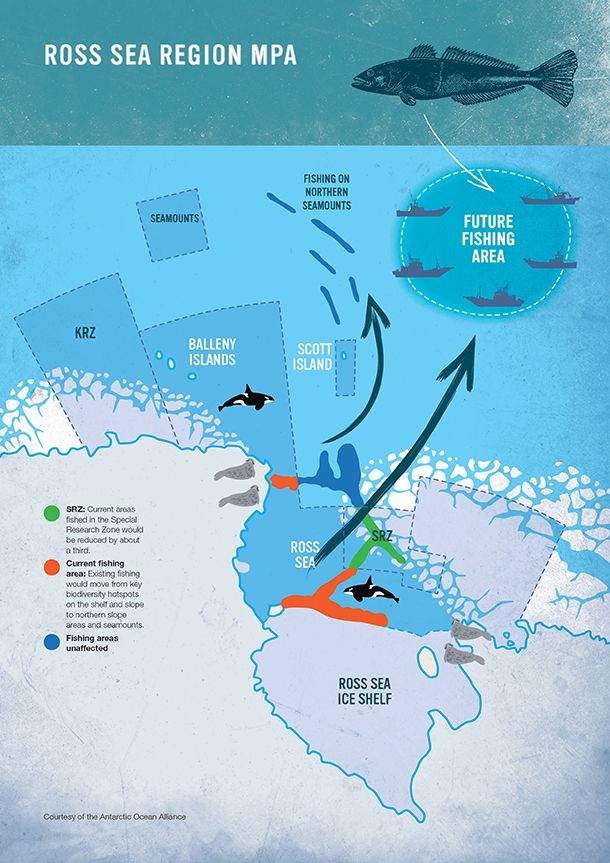 An infographic outlining the changes to fishing regulations in the Ross Sea. (Photo courtesy of the Antarctic Ocean Alliance)

WALKER: Yeah, indeed. Well, of the 1.5 square kilometers has been designated a Marine Protected Area, approximately 1.1 million square kilometers is going to be what's called “fully protected”, so that, quite simply, in two words, means "nothing extracted". But then there are going to be two smaller zones, one just over 100,000 kilometers squared which is going to be a special research zone, which will allow for limited research fishing of krill and as you say the lucrative Toothfish and then an even larger, just over 300,000 kilometers squared will, be for a krill research zone, and allowing for controlled research fishing of krill.

CURWOOD: So how excited are scientists about this development? How important is this?

WALKER: It's hugely important. It's historic in that it is not just the largest marine protected area in the world now, and I very much hope that that accolade doesn't last long and that the future MPAs are put in place which are larger. But it's historic in that it is the first in the high seas, which means the waters outside of any national jurisdiction. And why that is particularly significant and why many, many people are so happy is that being in the southern ocean, being in the healthiest body of water, that will have a great impact on the health of the ocean globally.

CURWOOD: What countries were the most reluctant and why? I imagine that they were concerned about not being able to do certain activities there.

WALKER: Yeah, the Ross Sea Marine Protected Area MPA proposal was made by New Zealand and United States back in 2012, and obviously then it was a matter of winning the support of the other 23 members. Now, when the annual CCAMLR meeting ended in October 2014, there were two countries that were still blocking the proposal. I should say that it's a consensus based system so all the members have to agree. So then when the meeting ended last year, the end of October 2015, in the last 24 hours of the meeting China gave their support to the proposal. So when we started this year, we of course knew there was only one country remaining, Russia. And for the last 12 months there's been considerable discussion and negotiation and outreach towards Russia at various levels.

CURWOOD: What were the Chinese and Russians particularly concerned that they might lose under this agreement?

WALKER: It's hard to know exactly what any one country's interests and motivations are. In the case of China last year, part of winning their support was, and securing their support was, the creation of this krill research zone which actually increased the overall size of the proposal. And then, as I said, in the last 12 months, since the end of the meeting in 2015, there’s been considerable, or there was considerable, negotiation and outreach with Russia. Russia of course has contributed to the process and to the discussions up until then. What we do know is that the negotiation or discussions happened at the highest level. John Kerry made it known in his concluding remarks to the, our ocean conference in Washington back in September, he made it known he had been involved in negotiation with his counterpart Sergey Lavrov on a number of occasions and also had been in discussions with President Vladimir Putin. So that gives a sort of a sense of the intensity, but also the height of the engagements and the political process required to get a decision like this made.

CURWOOD: Now, as you say this is the first major Marine Protected Area on the high seas in the no country's territory. It's also the first that I've seen to be one that has a sunset provision that there's a stipulation that these protections all go "poof" in 35 years if they're not renewed. Why do that? Why not simply make it permanent? 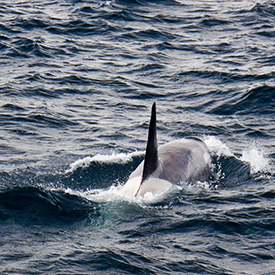 Orcas are among the wildlife that thrives in this newly protected area. (Photo: Ravas51, Flickr CC BY 2.0)

WALKER: Yeah, correct. There is a sunset clause of 35 years which certainly we regret. All the evidence is that Marine Protected Areas are most effective and have the greatest of benefits when they are large and long term. As I just said the negotiations were very difficult, very long. As you point out, it is the first time, and I think there could just be an element of, well, it’s the first time, and so the members and the decision makers involved, there's a degree of caution, and so a 35 year duration is a product of erring on the side of caution.

CURWOOD: To see what happens.
What do you think are the potential impacts of this protected area of the Ross Sea as far as future Marine Protected Areas are concerned?

WALKER: Well, within CCAMLR on the southern ocean there are existing, two other proposals: one for the Weddell Sea and the other for the east Antarctic. They will be considered again, at next year's CCAMLR meeting, so certainly we hope that that last week's decision will create an impetus for additional designations starting with the east Antarctic and the Weddell Sea. We also expect that by the time the CCAMLR meets again next October that there will be a third proposal for the Antarctic peninsula. CCAMLR has committed to putting in place a whole system, so that means up to nine marine protected areas, and so what we hope by last week's decision is that it creates that impetus and also the confidence amongst the 24 countries and the EU, and an appetizer, even, for further designations.

CURWOOD: Of course, one the iconic species there in the Ross Sea is the Emperor penguin, and a few years ago this movie the "March of the Penguins" was quite popular. To what extent do you think people around the world seeing the Emperor penguins struggling to reproduce and survive influenced the decision to move forward with making much of this area marine protected area?

WALKER: Um…I mean clearly penguins are a very charismatic species, one that captures the imagination and has captured the imagination of people for many years. The Russian Patriarch went to visit Antarctica sometime in the last couple of months, and he also I think was famously photographed communing with a penguin. So, yeah, undoubtedly that is something that people get behind, and penguins clearly are something that people latch onto, but there's of course a lot more to the Southern Ocean and Antarctica than just penguins but yes they perhaps a little easier to get people animated about than Toothfish or krill. 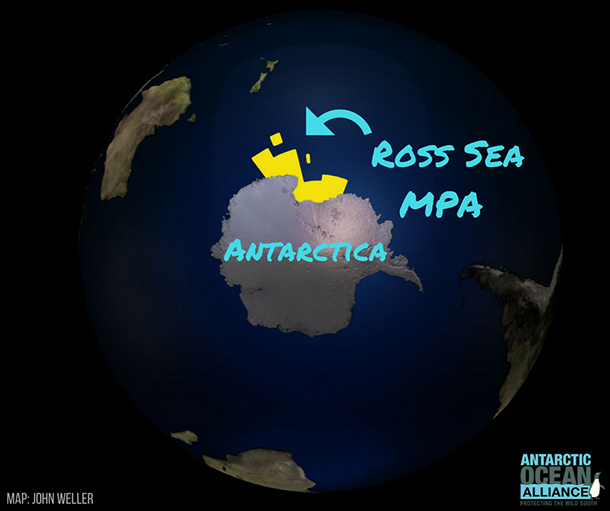 The Ross Sea covers about 1.5 million square kilometers off the coast of Antarctica. (Photo: courtesy of the Antarctic Ocean Alliance)

CURWOOD: Mike Walker is the Project Director of The Antarctic Ocean Alliance. Thanks so much for taking the time with us today, Mike.

WALKER: Not at all. Thank you, Steve.


About the Commission for the Conservation of Antarctic Marine Living Resources (CCAMLR):

Official statement from the Antarctic Ocean Alliance on the marine park

About the Antarctic and Southern Ocean Coalition

About the Antarctic Ocean Alliance