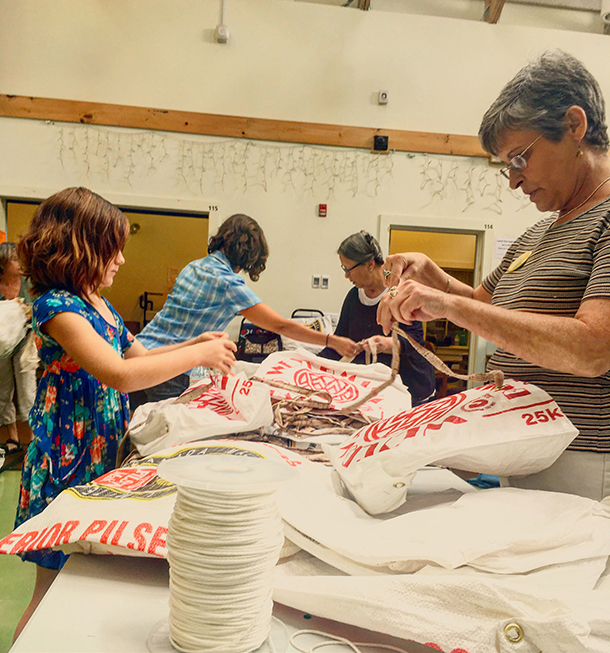 Volunteers affix handles to reusable bags at the Amherst Survival Center. The handles are made from donated scrap fabric, and the bags are malt packaging salvaged from local breweries. (Photo: Mindy Domb)

In cities, on roadsides, in trees – the discarded plastic bag is everywhere, and nationwide Americans throw away some 100 billion of them each year. Some jurisdictions have bans or charges on single-use plastic bags. Volunteers in Western Massachusetts are trying to further reduce waste by turning scrap material into reusable shopping bags – and sharing them as an attractive and practical alternative.

CURWOOD: It’s Living on Earth, I’m Steve Curwood. Among the issues on the November 8th ballot in California is a referendum aimed at preserving its first-in-the-nation statewide plastic grocery bag ban. California is not alone; several towns around the country also have bans or charge for single-use bags, but Americans still toss about 100 billion of them each year. So, in western Massachusetts, volunteers have come up with a creative and simple solution: sewing, and sharing. Living on Earth’s Charlotte Rutty has our story.

RUTTY: In a big, sunny room in Amherst, Massachusetts, 18 volunteers are hard at work. In one corner, a couple of people sort through used animal feed bags and tear out their dirty liners. Beside them, a mother and daughter fold and staple the bags, and then a college student clamps them in place with grommets.

RUTTY: The volunteers are all part of a local initiative called the BagShare Project, and by the end of the day the team will have hand-made almost two hundred, recycled, reusable shopping bags.

FRIED: This is just a station for tearing the fabric into the size for the handles…

FRIED: And over there they’re serging the handles and sewing.

RUTTY: Leni Fried is an artist, and she founded the BagShare in nearby Cummington, Massachusetts, back in 2007. Since then, she estimates that volunteers have made about 15,000 bags at community sewing events like this one. They then donate the bags to local stores, where customers can borrow them instead of taking a disposable one. 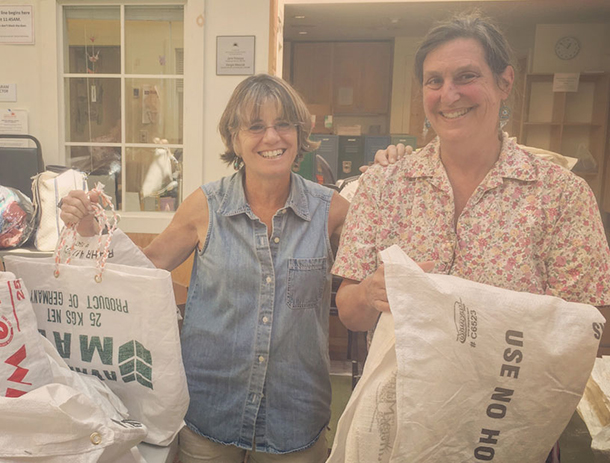 Leni Fried (right) is an artist and printmaker who founded the BagShare in Cummington, Massachusetts in 2007. Roxy Schneider (left) brought the project to Amherst several years later. (Photo: Mindy Domb)

RUTTY: The bags they make today are for the Amherst Survival Center, where they’ll be used to carry household goods to those in need. But BagShare bags can be found in stores, markets, and libraries all over western Massachusetts. It’s not just that the bags keep their plastic counterparts out of circulation. Since they make use of everything from salvaged fabric and plastic to computer wire, irrigation drip tape, and old clothes, BagShare bags keep all sorts of waste from being sent to the landfill. Leni says it’s important for people to see how a little creativity can save a lot of trash.

FRIED: When you go for a walk and you see a can in the woods…We have to own that trash. And so part of this project is to build awareness about how much is being thrown away and how much of what we throw away is completely usable and can replace us buying new things. If you’re recycling, it’s the end of the line. If you’re reusing, then you can be reducing what you buy and replacing something new.

RUTTY: The BagShare certainly fills a local need: in May 2016, Amherst passed a law barring stores from distributing the single-use plastic bags. Today’s bag-making is part of a flurry of activity to get more reusables into circulation by the time that ban takes effect in January. 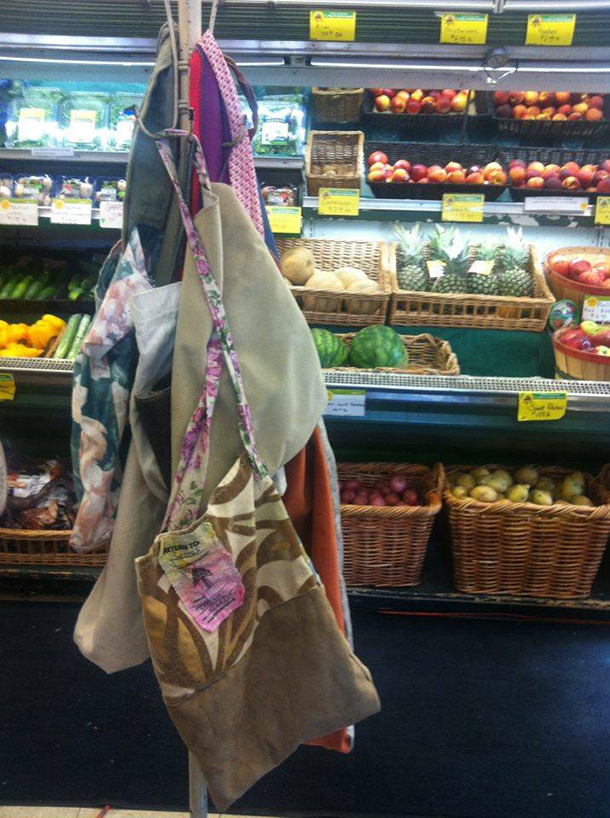 At Serio’s Market in Northampton, customers can borrow a BagShare bag if they haven’t brought their own reusable. The handmade bags can be found at stores, markets, and libraries all over western Massachusetts. (Photo: Charlotte Rutty)

In nearby Northampton, plastic bags have been banned for almost a year. The ban has helped reduce waste, but it doesn’t stop stores from using disposable paper bags. BagShare does.

Jaimie Golec runs Serio’s Market, a family grocery store in Northampton. It was one of the first stores to offer its customers the handmade bags. Since then, Jaimie says, she’s really seen a difference.

GOLEC: The amount of paper bags we have to order has reduced dramatically. Probably half.

RUTTY: BagShare bags hang on hooks at the entrance and exit of the store. They’re free to anyone who hasn’t brought their own reusable. As customer Andrew Stein loads his groceries into one of the bags, I ask him what he thinks of them.

STEIN: I thought it was a great idea. They look cool. They’re obviously repurposed from all sorts of different materials… So, yeah, and there’s a necktie as the strap and this kind of thing.

RUTTY: Serio’s customers have responded positively to the idea. They’ve even started donating scrap fabric to the project. As we leave the store, Jaimie passes us a few weeks’ worth of donations in huge bags. It’s a lot of fabric.

SCHNEIDER: This goes in your car.

FRIED: Look at all this! It’s unbelievable, right? OK.! It just keeps going, right? We can’t stop it, Jaimie!

[SOUND OF WALKING AND DROPPING BAGS OF FABRIC] 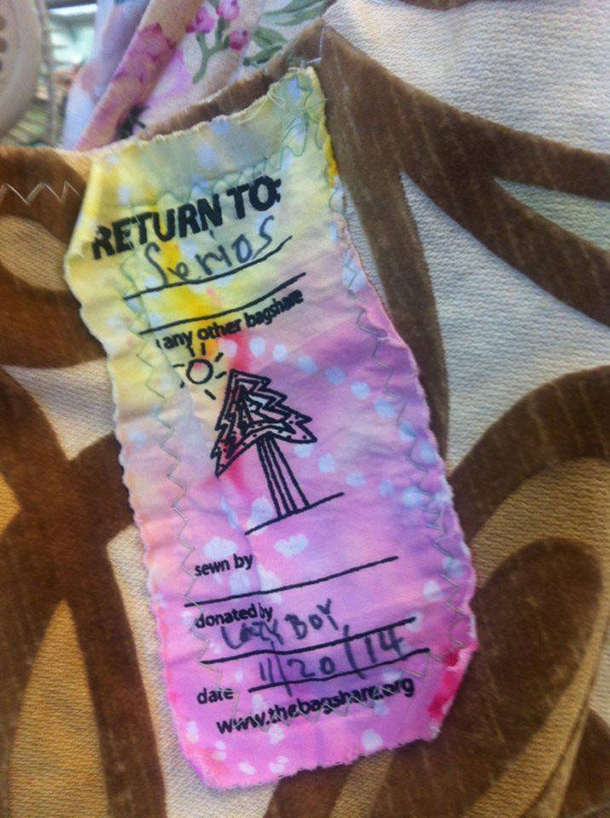 Leni Fried estimates that since 2007, BagShare volunteers have put up to 15,000 recycled, reusable bags into circulation. (Photo: Charlotte Rutty)

RUTTY: People all over western Massachusetts have donated scrap materials and sewing machines. BagShares have sprung up in nine different towns in the area.

FRIED: It’s not a top-down organization. I may have somebody contact me and all I do is just say, “OK, great. Where do you live? Who can you sew with? Who can use these bags?” I kind of help give them a direction, but then they lead. So my job is sort of creating leadership.

RUTTY: One of those leaders is Roxy Schneider, the volunteer who brought BagShare to Amherst several years ago, after stumbling across a sewing event in nearby East Hampton. She’s sewn all her life an, in addition to BagShare sewing sessions, she offers clothing repair clinics at the Amherst Survival Center.

SCHNEIDER: People can come, their kids can come, and learn how to sew. Elders can teach them. Men are learning how to sew buttons for the first time.

RUTTY: Teaching is central to the BagShare Project, especially teaching skills that go unappreciated in a world where most of what we need can be bought in a store. Here’s Leni Fried again.

FRIED: I call it a “maker-based activity,” compared to a “meeting-based activity.” I think that in our culture we’re too oriented often to do things with our heads rather than our hands. And so the more we can teach these kinds of skills, I think, the better off we are, we’re more prepared for whatever may happen in the future.

RUTTY: Being prepared is useful, but Leni says it’s the community around BagShare that is the real measure of its success.

FRIEND: We, as Americans, a big part of our identity is often that we’re individuals. And so the BagShare is about shifting that because we only have one planet, and we are forced to share it whether we want to or not. And I think that also, by sharing, we’re less alone. And I think that’s why the BagShare keeps going. 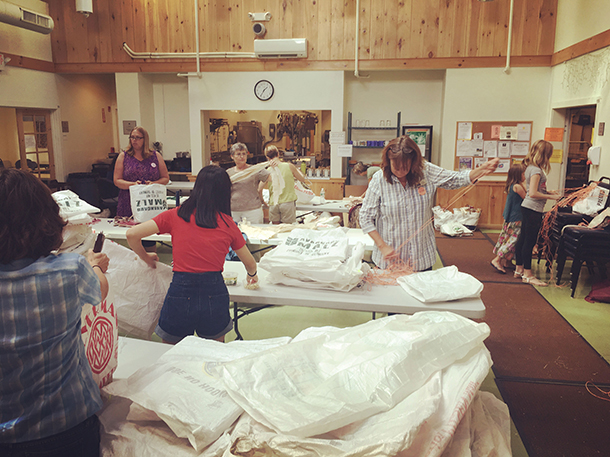 RUTTY: Going, and growing. Similar initiatives now exist as far away as Australia and Cambodia. For Living on Earth, I’m Charlotte Rutty in Amherst, Massachusetts.

How to make one of Leni’s Seed, Feed, and Malt Bags