The Trump Shade of Green 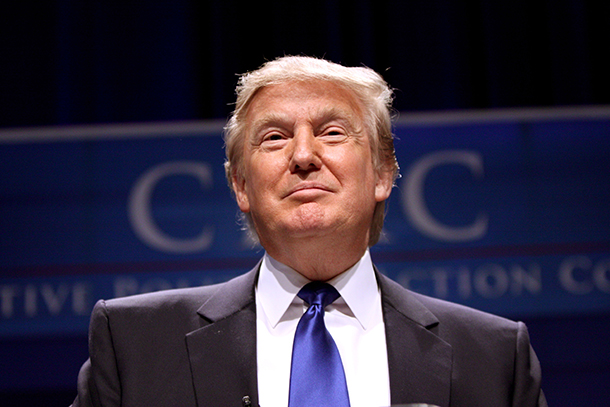 Campaign promises made prior to Donald Trump’s election as the 45th President of the United States suggest he will try to reverse a number of Obama administration environmental policies including the Clean Power Plan and U.S. commitments under the Paris climate Agreement. Peter Dykstra and host Steve Curwood discuss President-elect Trump's possible Cabinet picks and the regulatory rollbacks and policy shifts the next four years may bring.

CURWOOD: From the Jennifer and Ted Stanley Studios at the University of Massachusetts Boston and PRI, this is Living on Earth. I’m Steve Curwood. From January, Republicans will hold both branches of Congress and the White House, which suggests a vastly different outlook for issues related to the environment, global warming and energy. Peter Dykstra of DailyClimate.org and Environmental Health News, that’s EHN.org, is here to help consider the implications of America’s new political landscape. Hi there, Peter.

DYKSTRA: Hi, Steve. Let’s start out by stating the obvious: This Presidential campaign provided the starkest contrast and deepest divide we’ve ever seen on environmental issues.

CURWOOD: Yeah, and now that we know the outcome, what can we expect?

DYKSTRA: Based on the people President-elect Donald Trump may appoint and the promises he’s made on the campaign trail, advocates of clean energy and strong environmental protection have almost nothing to cheer about.

CURWOOD: OK, well let’s run through some of those promises.

DYKSTRA: For the most part, Trump’s rhetoric has been very hostile toward environmental regulation. At one point he vowed to abolish the EPA, but in September, he said that he’ll...these are his words: “refocus the EPA on its core mission of ensuring clean air, and clean, safe drinking water for all Americans.”

CURWOOD: So clean air, clean water, those are both things that we need. What about clean power, as in the form of the Clean Power Plan? 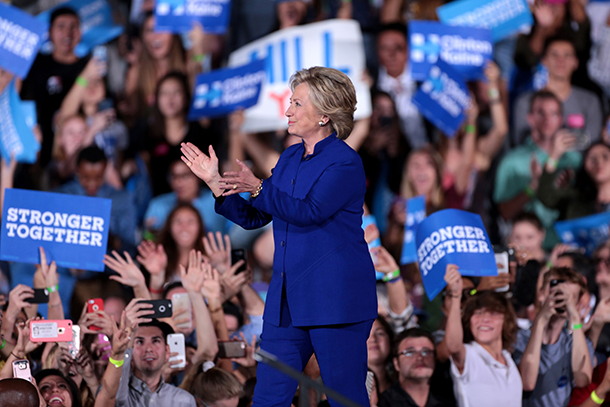 DYKSTRA: Not a chance. In another September promise, Trump said he’d do away with the Clean Power Plan and cut back on controversial elements of the Clean Water Act as well. He’s vowed to reverse Obama’s rejection of the Keystone XL pipeline, open up more Federal lands to fossil fuel production, and in his words, “rip up” the Paris Climate Agreement.

CURWOOD: But wait, it’s not clear that he can just cancel the Paris accord.

DYKSTRA: But I believe him when he says that he’ll try, and flipping the US from climate leadership to climate denial will impact the entire world both politically and physically. As David Roberts, who follows this issue very closely for the Vox website wrote, “Any hope of avoiding serious impact from climate change pretty much disappeared on Election Day.”

CURWOOD: And what about President-elect Trump’s statements on coal?

DYKSTRA: Well he’s said some things that even Bob Murray, the most zealous of the coal magnates, has said are unrealistic about bringing back coal mining jobs for “a thousand years.” Some coal company stocks that have plummeted in recent years picked up right after Election Day, but two market-driven phenomena that the new Administration probably can’t stop are the further decline of coal and the stunning growth of wind and solar, though clean energy leadership seems pretty much out of the question in a Trump Administration. On the campaign trail, Trump said he’s in favor of all forms of energy, but he’s also been on something of a vendetta against wind power - years of litigation against an offshore wind farm project near his Scottish golf resort.

CURWOOD: Which, by the way, the wind farm eventually won.

DYKSTRA: Correct, and he incorrectly said that US wind farms kill a million birds a year. That’s double the highest estimate from any reliable study. 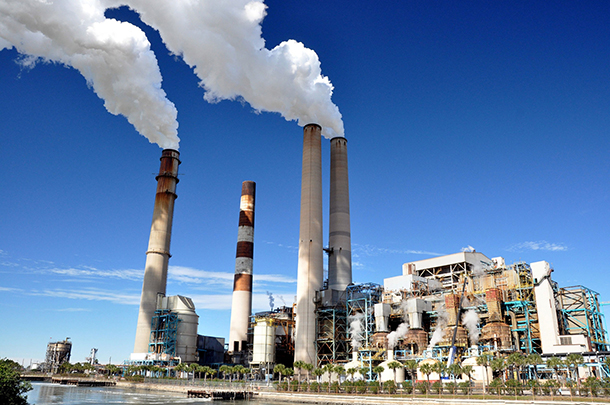 President-elect Donald Trump has vowed to cancel the Clean Power Plan and the U.S. role in the Paris Agreement. (Photo: Walter, Flickr CC BY 2.0)

CURWOOD: OK, well...Now let’s stick our toes into speculative waters. Who can we expect to see carrying out the President-elect’s vision. Who are some of the names out there for a Trump cabinet?

DYKSTRA: Here are some names floated right after Election Day. For Secretary of State, the names include former House Speaker Newt Gingrich and Bob Corker, Chair of the Senate Foreign Relations Committee.

CURWOOD: Now, they would succeed John Kerry, who’s been very active in pursuing the Paris climate agreement and in establishing a huge marine reserve in the Ross Sea off Antarctica. What about Attorney General?

DYKSTRA: The nation’s leading law enforcement officer could be Rudy Giuliani, the former New York Mayor and a vocal Trump supporter. Other possibilities include New Jersey Governor Chris Christie and Florida Attorney General Pam Bondi, but both of them have been dealing with their own scandals this year. Defense Secretary is also key, given the Pentagon’s stance that climate change is a global security issue. Alabama Senator Jeff Sessions is one name out there, and in the past he’s declared that he’s “offended” by the opinions of climate scientists, and he charged EPA Administrator Gina McCarthy with what he called “stunning ignorance” on the issue.

CURWOOD: Now, what about the other cabinet posts that are more directly focused on energy and environment? 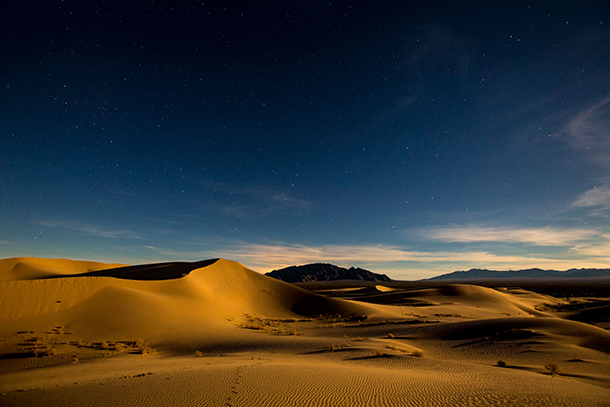 President Obama set aside Mojave Trails National Monument in California earlier this year. During his eight-year tenure, Obama has designated 23 National Monuments under the Antiquities Act, more than any other President, and could use the remaining days of his presidency to add to this legacy. (Photo: Bob Wick / BLM, Flickr CC BY 2.0)

DYKSTRA: Lew Eisenberg, the Republican National Committee finance chair, is churning in the rumor mill to be the next Secretary of Commerce. And of course, NOAA, one of the most important science and environment agencies, would be under his control. Other names floated for Commerce include billionaire investor Wilbur Ross and two former governors and Presidential hopefuls, Mike Huckabee and Rick Perry.

CURWOOD: Now what about the Department of Interior, in charge of most of the rest of public lands, wildlife protection, and more?

DYKSTRA: One of the names out there is Forrest Lucas. The other is former Vice Presidential candidate Sarah Palin. Then there’s also fracking baron Harold Hamm, and venture capitalist Robert Grady. Those two are said to be on the short list for both Interior Secretary and Energy Secretary.

CURWOOD: So, who might get the top EPA job?

DYKSTRA: The list so far includes two state officials, one appointed by Chris Christie in New Jersey, the other appointed by Vice President-elect Mike Pence when he was Governor of Indiana. Leslie Rutledge, the Arkansas Attorney General who’s helped lead the multi-state challenge to EPA’s Clean Power Plan; Robert Grady again – his name is actually up for three different cabinet posts - and Myron Ebell, a Washington lobbyist who is among the highest-profile opponents of climate change action.

CURWOOD: And let’s go down ballot, to what’s worth noting in the House and Senate.

DYKSTRA: The Democrats had hoped to win control of the Senate. That didn’t happen, Republicans still hold the majority and will control all of the committee chairmanships. Same for the House, though the Democrats harbored no illusions about taking control there. There are two noteworthy, climate-related races in Florida and Texas, though. Charlie Crist is a former Republican and former Governor of Florida. He switched parties, became vocal about climate change, and lost a 2010 Senate bid to Marco Rubio. 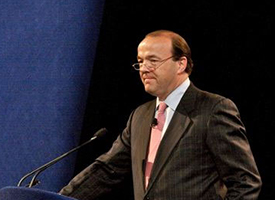 CURWOOD: Who also got re-elected last Tuesday, by the way.

DYKSTRA: Right. Crist made a political comeback by beating Congressman Dave Jolly, one of the few Republicans in office raising climate change concerns at all. And in Texas, Lamar Smith, chair of the House Science Committee, won re-election fairly easily, but there’s a catch. Two years ago, the Democrats couldn’t even field a candidate to oppose him. But this year, a political newcomer named Tom Wakely put a little scare into Lamar Smith and one of the key issues he raised was what some have called the persecution of climate scientists via subpoenas from the House Science Committee. Lamar Smith also threatened to jail Kathryn Sullivan, the head of NOAA. His seat is safe, but the Democrats went from zero percent last election to 36 percent this time.

CURWOOD: Now, President Obama is now a lame duck, with a hostile Congress. What do you expect from him in his final two months in office?

The Bush Administration used “midnight regulations” – last minute changes that don’t require Congressional approval – to undermine the Endangered Species Act. And Bill Clinton finalized the Roadless Rule, which banned new roadbuilding on nearly 60 million acres of roadless National Forest land. And he did that with eight days to go in his term.

With all of the jubiliation among Trump supporters and the shock that’s overwhelming Trump opponents, one thing you’re not hearing right now from anyone is, “Make America Green Again.”