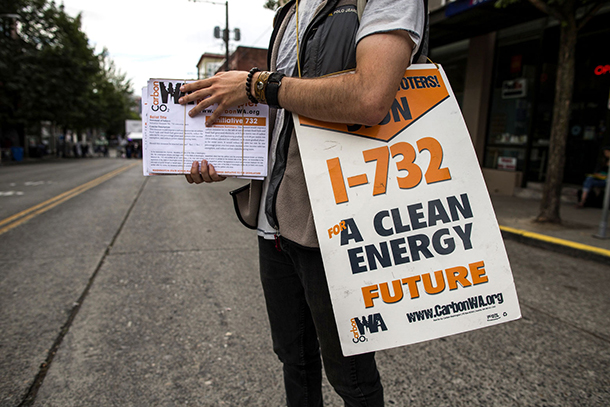 I-732 was defeated in Washington state, and would have resulted in the nation’s first carbon tax legislation. (Photo: Carbon Washington)

Among the environmental ballot measures on November 8 was a carbon tax in Washington state, and an electric utility-friendly solar energy provision in Florida, that both went down to defeat. Proposals for new parks fared better in Alabama and Missouri, and a plastic bag ban was upheld in California. Living on Earth’s Jaime Kaiser examines the issues and has the story.

CURWOOD: With the Republican sweep of the White House and Congress one has to look to the states and localities for political diversity, as some local ballot measures showed. All of the states where Secretary Clinton won also passed recreational marijuana. And it’s now legal in eight states. And three states President–elect Trump won also approved medicinal marijuana, which will now become available in a total of 28 states. But as Living on Earth’s Jaime Kaiser reports, those weren’t the only green referenda.

KAISER: Republicans now control Congress and the presidency, and robust federal action to advance environmental issues seems unlikely, yet for green activists, the results of some state ballot measures brought a degree of solace. The most fiercely debated environmental measure was Washington State’s Initiative 732. This carbon tax plan, proposed by a group called Carbon Washington, was narrowly rejected. Some campaigners saw it as a promising opportunity to curb emissions, but not all climate activists did.

SALDAÑA: Carbon Washington, as a solution, and was one that actually was not a solution at all for Washington. And so what this does is it gives us momentum to say that yes, action needs to be done.

KAISER: Rebecca Saldaña is the executive director of Puget Sound Sage, one of the partner organizations in the alliance for jobs and clean energy that actively fought Carbon Washington’s proposal. She objected to measure 732 because it was “revenue-neutral”, meaning the money generated would offset tax cuts in other areas. Saldaña wants a different kind of carbon tax, one that funnels the cash into public social projects.

SALDAÑA: For a lot of our communities without strategic investments – all they’re getting is the tax but they’re not getting a way to participate in actually electrifying their vehicles, you know, having alternative choices, you know, that’s why people voted no.

KAISER: The Alliance plans to bring their alternative carbon plan to the state legislature in January. But Yoram Bauman, the economist behind Carbon Washington, also plans to move forward in spite of his initiative’s recent defeat. 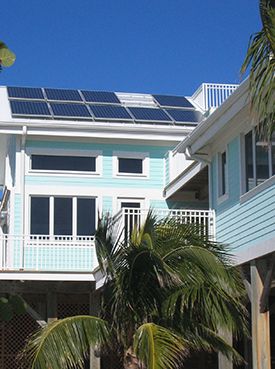 BAUMAN: Carbon Washington is going to continue to push for, you know, smart, bipartisan budget-friendly climate policy. We’re certainly going to participate in discussions in the legislature, and we’ll see what happens down the road.

KAISER: Similar tensions to those brewing between free-market advocates and groups on the environmental left surfaced – less dramatically -- in Rhode Island over Question 6, where voters overwhelmingly approved Green Bonds for environment and recreation.

Meanwhile in the Sunshine state of Florida, renewable energy advocates are celebrating the failure of Amendment 1, a solar energy measure put forward by a coalition of utility companies called Consumers for Smart Solar. The group Floridians for Solar Choice led opposition to the Amendment. They claimed that the measure’s confusing ballot language masked an agenda to preserve utility monopolies and undermine the solar industry and its customers. Here’s Steven Smith, a board member for Floridians for Solar Choice.

KAISER: Amendment 1 saw support early on and had a well-funded campaign operation, but ultimately it wasn’t enough.

SMITH: How we were able to defeat Amendment 1 is that we have been building this broad coalition – And it’s not a paper tiger – It’s not a superficial relationship that we have with the Tea Party and the Libertarians. We are actually working very closely with them, progressives, conservatives. A broad coalition has been working now for almost two full years. So we’ve had a steady set of organizing targets that we’ve been able to work with, and our coalition has gotten stronger every step of the way.

KAISER: Californians voted on two Propositions related to a ban on single-use plastic bags. These were proposed by an alliance of plastic companies and other interest groups known as the American Progressive Bag Alliance. Proposition 65 would have directed revenue generated from fees on recyclable, compostable and reusable bags to a wildlife conservation fund but did not pass. Proposition 67 to preserve the statewide ban that went into effect last year did pass, but only narrowly, 52 to 48 percent, as Phil Rozenski, of the Bag Alliance pointed out. 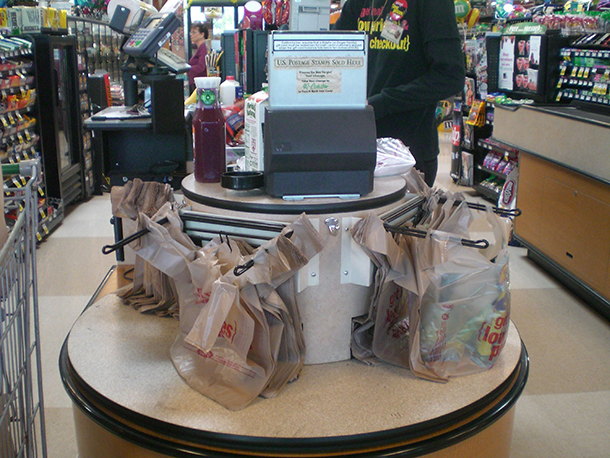 The California ban on single-use plastic bags in grocery stores and other retailers remains in place in light of a “Yes” vote on Proposition 67. (Photo: Day Donaldson, Flickr CC BY 2.0)

ROZENSKI: That one actually barely passed, and it shows that even in California it’s difficult for this to have much support. Most of the support came from the Los Angeles and San Francisco Bay area, and the rest of the state appeared to be generally opposed to it.

KAISER: Bag bans are not a new phenomenon in California. Over 150 California towns and cities already have bans, and this has resulted in more than an 85% reduction in single use bags in some places. In other states, some down-ballot measures focused on outdoor project funds and animal rights. Voters overwhelmingly approved state infrastructure funding with landslide wins on park-related measures in Alabama and Missouri. As for animals rights, a win and a loss. Massachusetts voted to prohibit certain restrictive containment practices for farm animals, but in Montana a measure which would have prohibited the use of snares and traps for wild animals on state property was voted down.


Washington’s Initiative 732 on the carbon tax

California’s Proposition 65, which would have dedicated revenue from the plastic bag ban ban