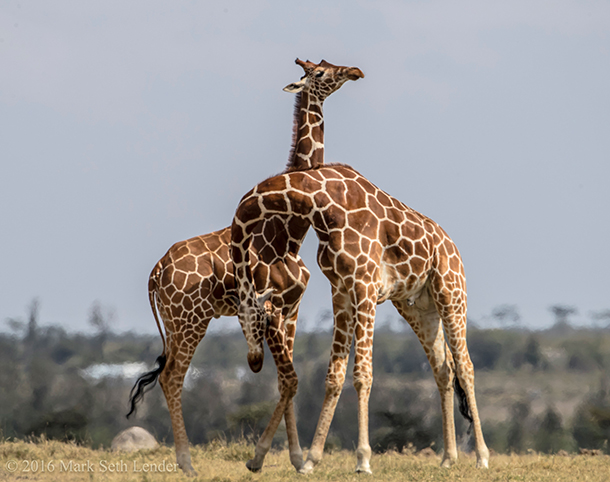 Giraffe usually communicate silently, using visual or tactile cues. Resident Explorer Mark Seth Lender visited the plains of Kenya and observed one such conversation, between a young Giraffe and his brother.

CURWOOD: We stay in Africa, with another iconic savannah species, the giraffe. At night, giraffe hum, a sound akin to a huge double bass. But they’re silent by day so when they communicate it’s mainly by visual or tactile cues. And in Kenya, at the equator, our resident explorer Mark Seth Lender eavesdropped on a pair of young giraffe having just that kind of conversation.

LENDER: In the only way they can, 5 giraffe are lying down: Necks towering, feet tucked under, like shallow-rooted trees. They have chosen this patch of grass that mounds up above the plain for the safety of the view. One by one they rise, long legs awkward in their unfolding, and in their stately upright way walk toward a stand of acacia where they will feed.

Some yards behind two remain. They are six months, maybe a year apart, giraffe at four fifths and two thirds scale. Elder Brother, and Little Man, and the eight hundred pounds between them.

Little Man presses his chest against his brother's flank and slowly rubs neck to neck, once, twice, and once again his horns coming to rest well below the other's chin. And in reply Elder swings the mallet of his head down, down on Little Man and once, twice, thumps him in the ribs

And so it begins. 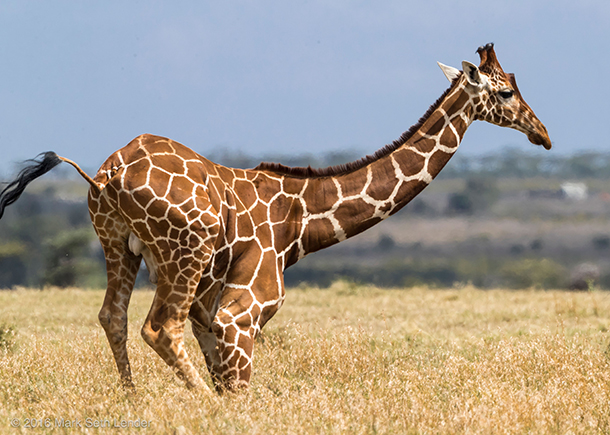 Now, it's Little Man's turn. Five tries love taps none connecting. Then stops. And strooooookes, and rubs his cheek on Elder Brother's throat as if to say: “We're only kidding right?

Elder Brother slams a horn into that tender place back of the forelimb.

Little Man bounces sidewise to the blow. And gives it a go: Hit front leg hit back leg; now this place, now that place...

And they turn, and turn, and round each other like a maypole, The Kettle Drum, and The Piccolo…

The flick of a wrist

Like splitting rails, an iron nail, sent home in One! Blow!

An act of Generosity beyond the casual encounter that it seems: When Little Man is Big Man, will he remember, or forget, the Teacher Old Man used to be?

CURWOOD: For a video Mark took of this pair jousting, and more, head on over to our website, LOE.org.

About giraffe conservation from the Wild Nature Institute