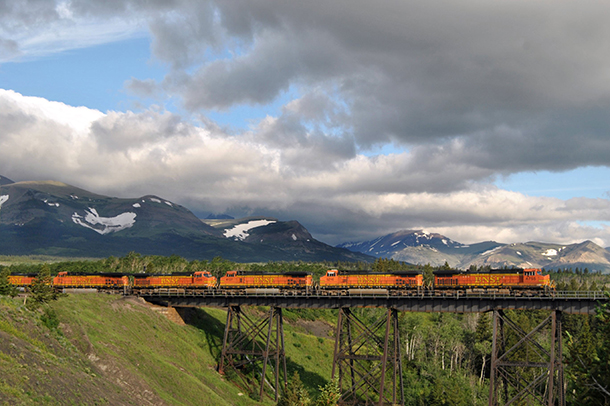 The Obama Administration has cancelled oil and gas leases on 30,000 acres of Montana’s Badger-Two Medicine region near Glacier National Park, land the Blackfeet Nation considers sacred. Blackfeet Tribal Council Secretary Tyson Running Wolf discusses the significance of this decision with host Steve Curwood, as well as the next steps for ensuring the area is protected for the Blackfeet people.

CURWOOD: From the Jennifer and Ted Stanley Studios at the University of Massachusetts Boston and PRI, this is Living on Earth. I’m Steve Curwood. As the Standing Rock Sioux continue to protest the construction of the Dakota Access Pipeline in a watershed they consider sacred, another Native American nation is celebrating a win for its own holy lands. The federal government has now cancelled 15 oil and gas leases on land the Blackfeet Nation reveres in the Badger-Two Medicine area, near scenic Glacier National Park in Montana. The move caps two years of intense negotiations among the Blackfeet, Secretary of Interior Sally Jewell, Montana Senator John Tester, and Devon Energy, which owned the leases, but had never drilled. Tyson Running Wolf is Secretary of the Blackfeet Tribal Council and joins us now from Browning, Montana. Tyson, welcome to Living on Earth.

RUNNING WOLF: Thank you. Glad to be on with you guys.

CURWOOD: Well, congratulations. Now tell us about the Badger-Two Medicine area and why it's important to the Blackfeet nation.

RUNNING WOLF: The Badger-Two Medicine is an area that is located just to the southwest of the Blackfeet reservation and south of Glacier National Park. It covers about 168,000 acres and includes a lot of our cultural, spiritual areas for the Blackfeet people.

CURWOOD: This is dramatic territory, right? It's pretty close to the Bob Marshall Wilderness?

RUNNING WOLF: Yes, it's just to the north of the Bob Marshall Wilderness and it is on Rocky Mountain front and butts right up to the Continental divide.

CURWOOD: So, this is territory with grizzly bears and amazing fish and all kinds of wildlife. I've been to the Bob Marshall. If it's anything like that, it's pretty wild.

RUNNING WOLF: Yes, I would say that it's the Swiss Alps of the North American continent. It's so dramatic where the Great Plains meet the Rocky Mountains with beautiful blue lakes, nice green forests and a vast cultural history of Blackfeet people. It is unique. It's tough. It's steep and has some threatened and endangered species, including the Blackfeet. [LAUGHS] 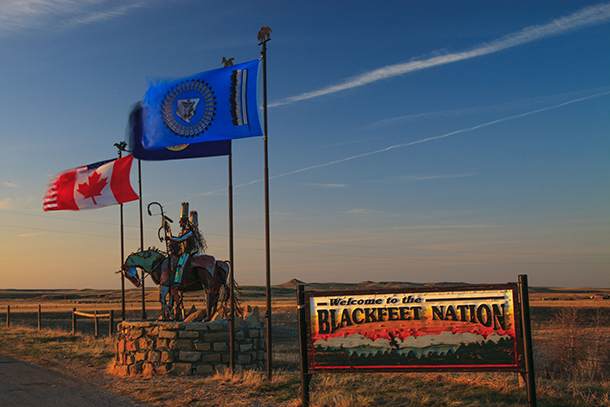 CURWOOD: [LAUGHS] You mean your nation is endangered.

RUNNING WOLF: We always feel like it, so we always work really hard to try to preserve and protect us as Blackfeet people.

CURWOOD: Now, why would development of those oil and gas leases have been damaging to the Blackfeet nation in the area?

RUNNING WOLF: If there's oil and gas development that happened in there, and there was a malfunction or something went wrong, it would compromise the Badger and the two Medicine rivers, two major drainages that we hold very dear to us that flows down and connects into the Missouri drainage, and also the Birch creek system which always seems to get left out, as Birch Creek is also a big part of that.

CURWOOD: To what extent is this a sacred land for the Blackfeet Nation?

RUNNING WOLF: This area is a lot of our spiritual area that we go for solitude. A lot of our people go there for different ceremonial purposes, also for gathering medicines that we have back there. Also for the relationship of animate and inanimate objects that are back there that we have passed down for generations upon generations of how we use them and what kind of relationship we have with them for the betterment of Blackfeet people.

CURWOOD: As I understand it, you and your fellow Blackfeet leaders consider these oil and gas leases to have been granted illegally back in 1982. Explain that for me, please.

RUNNING WOLF: We felt the leases were illegally let to individual leaseholders on oil and gas because they didn't consult the tribe. They didn't let us know what was going to happen back there. The federal government didn't follow their own process on how to involve Blackfeet people on land that we still feel is owned by the Blackfeet themselves.

CURWOOD: Tell me, how long has the Blackfeet Nation been on this land, do you think?

RUNNING WOLF: We have documented historical data that we've been here for 10,000 years or longer.

CURWOOD: So, eventually you got to sit at the table with, what, the Secretary of the Interior, your Senator from Montana John Tester, and the company that had owned these leases, Devon Energy. What was the key to getting this deal together once you got to the table? 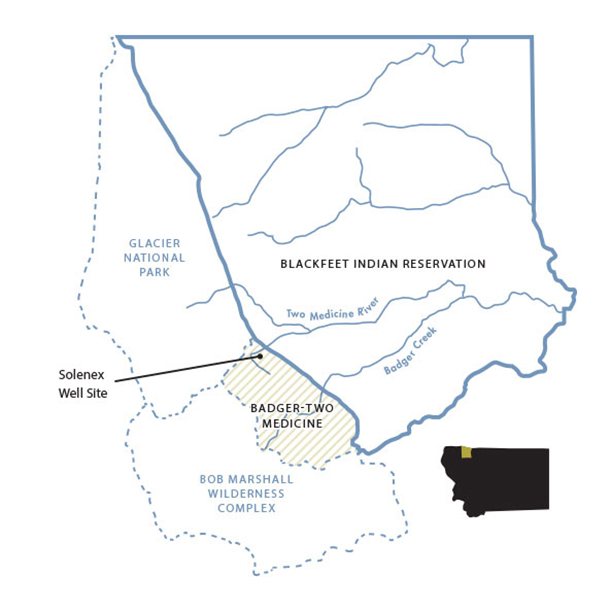 RUNNING WOLF: The key was relationship of understanding each other's reasons for protecting certain areas of the rich cultural importance that the Blackfeet have in the area, and also what Department of Interior and the US Forest Service, knowing that it's a very special place also with the hard work of John Tester and his connections.

CURWOOD: Tyson Running Wolf, I understand there still are a couple of oil and gas leases in the Badger-Two Medicine area. How much of a threat do those leases pose to the Blackfeet nation and this land?

RUNNING WOLF: Yah, them leases...There's 11,000 acres still out there held by two companies. It is just as important as the 32,000 acres that was just canceled. The whole 168,000 acres is still compromised with having them two leases available to lease.

CURWOOD: So, what's going on with getting those leases canceled? Who owns them and what are they saying?

RUNNING WOLF: I don't necessarily know who owns them. We have people out there researching that right now. We want to get them names and numbers of who owns them two particular, last leases, get them to the federal government, get them back to the tribal business council, and start engaging in some positive dialogue so that we could try to make something happen to where we can get these leases canceled right away.

CURWOOD: And, of course, when leases are canceled the folks get their money back and whatever extra fees they've paid.

CURWOOD: What's next for the Blackfeet Nation's efforts to protect sacred lands including the Badger-Two Medicine area? 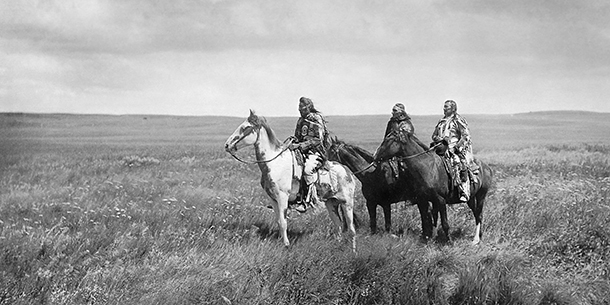 The Blackfeet people have been living on the Great Plains of Montana for at least 10,000 years (Photo: Edward S. Curtis, Wikimedia Commons public domain)

RUNNING WOLF: Co-management of the Badger-Two Medicine. That's the next thing we're shooting for. We always push on Glacier National Park which is to the north and also the Forest Service which holds in trust the Badger-Two Medicine. Now, we would like to put back to the two most important things on the landscape, and that's the buffalo and the Blackfeet. And we want to cooperatively work with both of them entities to make that happen. And any other management decisions, we want to be sitting at the table, and we also want to make sure that our people are right involved in the best interest of this tribe on what the direction of that landscape should be.

CURWOOD: Because, right now, much of the territory, especially, say, the Bob Marshalls Wilderness, no one is allowed to live there as I understand it.

CURWOOD: And, of course, this was your ancestral lands.

RUNNING WOLF: That was our ancestral lands, yup. 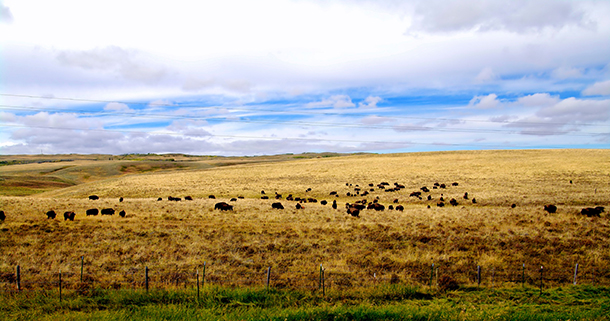 CURWOOD: And, by the way, in Blackfeet, what's the name of Badger-Two Medicine area. What you call it in your language?

CURWOOD: And the Blackfeet word for hope?

RUNNING WOLF: Hope? The Blackfeet word for anything of hope or survival is komo-tani.

RUNNING WOLF: You betcha. Thank you.

About the Blackfeet Nation

Senator Jon Tester’s statement in support of the lease cancellation