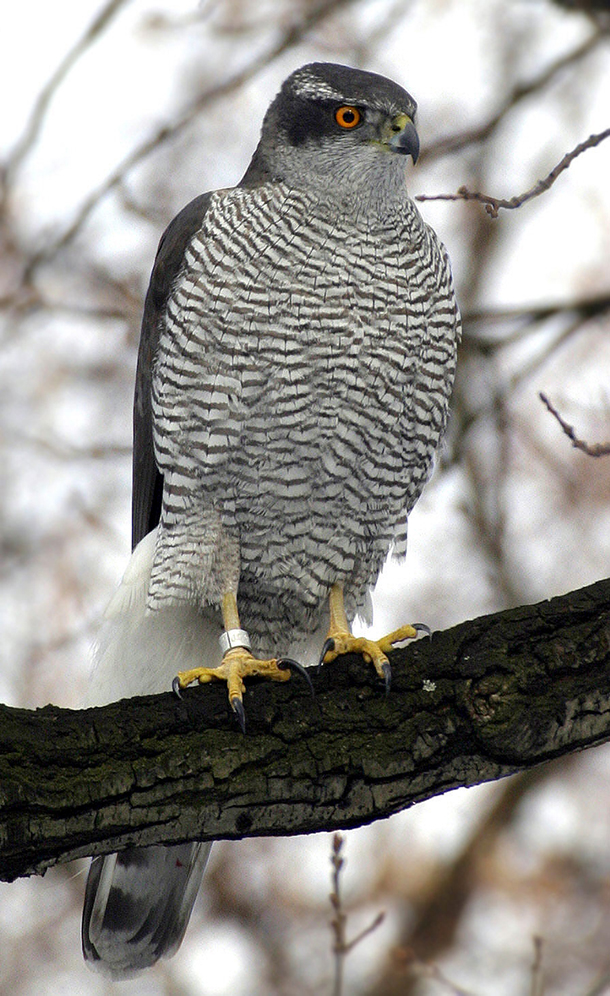 In the wintry boreal forest of North America, an impressively large and fast raptor seeks its prey. As Michael Stein explains, falconers have admired the Northern Goshawk, the largest hawk of the northern forest, for centuries.

CURWOOD: Let’s take to the skies now and chase down one of the fastest fliers out there, a bird that falconers have admired and cherished for centuries. As Michael Stein explains, the fierce Northern Goshawk rules the skies above boreal forests.

All’s quiet on a December morning in a northern Ontario forest. A long, narrow clearing affords a clear view of spruce and birch trees. Then, nervous yelps from a red squirrel interrupt the silence. [Red Squirrel in background] ... and like a silver thunderbolt, [Sound of wings whooshing by] a large bird of prey rushes by low to the ground, in rapid pursuit of a Ruffed Grouse. The grouse flaps madly,
[wings flapping] just eluding its pursuer by winging wildly into a dense thicket.

[Sound of crashing into the underbrush]

The hunter flies up to perch at the edge of the clearing. It’s a Northern Goshawk, one of the most fearsome and admired of all birds of prey. [Northern Goshawk calls] Silver-gray with a bold white slash above its menacing red eye, the elegant goshawk is the largest hawk of the northern forest. Since at least medieval times, falconers have regarded the goshawk as a bird of great distinction. Attila the Hun even wore its image on his helmet.

[Sound of wings whooshing by] 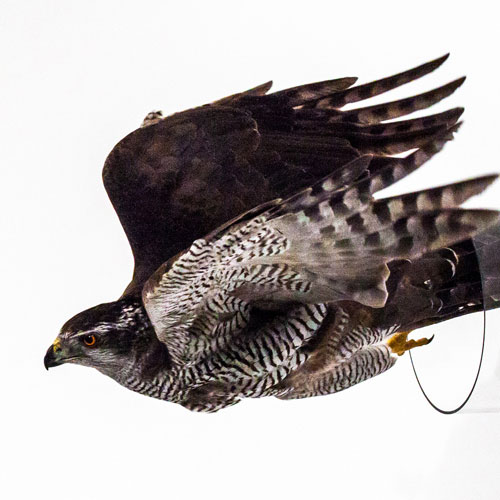 The boreal forest is a vital part of the bird’s range. Yet, during lean years, when Ruffed Grouse and snowshoe hare populations dip – as happens about every ten years – the scarcity of prey brings Northern Goshawks south. It’s then that we're more likely to see these beautiful and fearsome hunters.

CURWOOD: Dive on over to our website, LOE dot org, for some pictures.