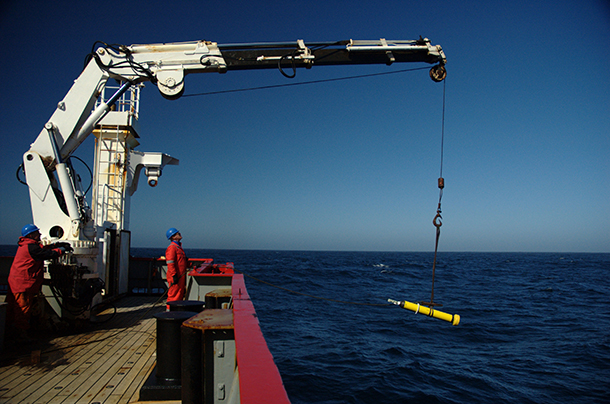 An Argo float being raised out of the Bellingshausen Sea. (Photo: fruchtzwerg's world, Flickr CC BY-NC-ND 2.0)

CURWOOD: From the Jennifer and Ted Stanley Studios at the University of Massachusetts Boston and PRI, this is Living on Earth. I’m Steve Curwood.

There’s been snow on the ground in all but one of the 50 United States in recent days, highlighting climate volatility but also encouraging global warming skeptics who don’t, or won’t, understand the science. Skeptics are also heartened by the so-called “global warming pause”, a period between 1979 and 2014 when research based on sea surface data made it appear that average global temperatures were not rising, but in 2015, the National Oceanic and Atmospheric Administration updated their research with new data that does show a steady rise in global temperatures. This outraged some politicians who claimed that the numbers were recalibrated to please climate action proponents on Capitol Hill. Now, another study has independently corroborated NOAA’s new results. Zeke Hausfather, a research scientist at Berkeley Earth in California was one of the lead authors of that study. Welcome to Living on Earth.

CURWOOD: So, the updated sea surface temperatures...why was his controversial that scientists are always correcting their data when they get more information?

HAUSFATHER: So, in 2015 NOAA published a paper in "Science" where they released a new version of their sea surface temperature records. They updated it from version 3 to version 4. Now, this new version showed a lot more warming than their old version. It roughly doubled the amount of warming reported since 1998. While this doesn't make that big a difference in an understanding of long-term warming, it makes a big difference in this so-called pause or hiatus period in recent years a lot of folks been talking about. And in fact, in this new NOAA record, it's hard to see any slowdown or pause in warming at all in recent years. So, it was controversial mainly because of its implications. The new data showed no slowdown in warming, that ruffled a lot of feathers particularly in Capitol Hill and led to a number of Congressmen, including the head of the House Science and Technology Committee, to accuse NOAA scientists of cooking the proverbial books and even demand access to all the scientists' emails.

CURWOOD: So, what prompted you and your organization to replicate the 2015 research that was conducted by NOAA?

HAUSFATHER: We, from a scientific standpoint wanted to figure out what exactly was going on in the last 15 years to the Earth's climate and particularly the Earth's oceans, which are two-thirds of the planet, and there's pretty big disagreements now between the old NOAA record which showed a lot less warming, the new record which shows a lot more warming, and the record from the UK Hadley Centre, which is one of most commonly used global temperature records, which is about halfway between the old and new NOAA records.

CURWOOD: Talk to me about the instruments that have been used before. What was the Hadley Centre of the Met office, how were they getting their data, how was NOAA getting its data earlier?

HAUSFATHER: Sure, so the way we measure ocean temperatures has changed a lot in the last two decades. Until the 1990s, pretty much all of our measurements came from ships. In the distant past, it was by throwing buckets over the side of ships, pulling them up, and sticking a thermometer in those buckets. More recently it's in ship engine rooms and and engine intake valves, where they pull in water through the hold to cool the engine; they stick a thermometer in it. But starting in the early 1990s, governments around the world started investing a lot of money in modern, high-quality ocean monitoring systems, initially, with buoys but also with satellites. 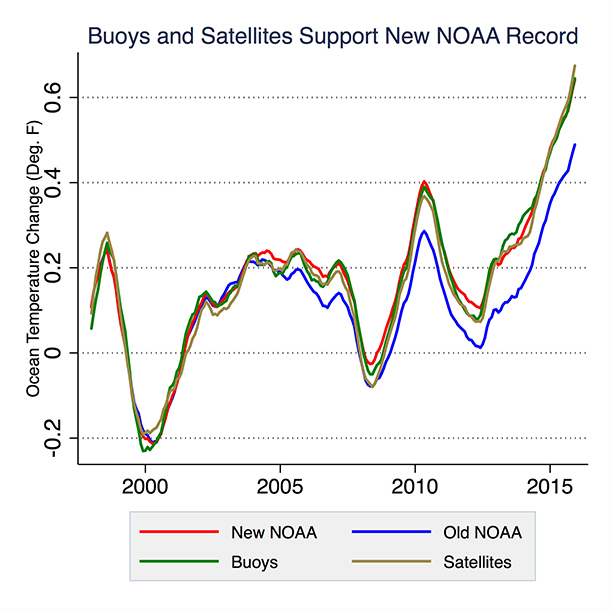 CURWOOD: So, what were the objectives then precisely of your recently published study?

HAUSFATHER: So, both the NOAA record and the record by the UK's Hadley Center are what we call composite temperature records. They try to take data from a lot of different types of instruments like ships and buoys and smush them all together into a single, long-term record. Now, the problem with that is, whenever you combine different types of instruments, they measure temperature differently, and there's some judgment calls needed on how you handle the transition from one to another. Our insight, and what made our study important is, we said, “Well, what if we don't try to combine instruments? What if we use data just from one type of instrument? And it turns out that in the last two decades we've had an unprecedented amount of new Earth observation data that we’ve never had before, a lot of it which isn't being used by current monitoring groups.

So what we did is, we took data just from ocean buoys. We took data just from satellite radiometers, which are essentially like infrared cameras in space. We took data just from Argo floats, which are these awesome little robots that float around the ocean and dive deep down and come back up every few days and then send their readings up to the satellites automatically. And the nice thing about these, what we call instrumentally homogenous records, is that they don't require any adjustments for switching from instrument with another, and it turns out that all three of those records - the buoy record, the Argo record, and the satellite record - agree almost perfectly with the new NOAA temperature record. They show a strong cooling bias, or lower trend, in the old NOAA and a more modest but still significant cool bias in the Hadley Centre record.

CURWOOD: So, what you're telling me, then, is, if you just look at actual data from the more modern instruments, you still come up with results are really consistent with what NOAA has found in its most recent paper.

HAUSFATHER: Correct. And in fact, what seems to be going on seems to be that there is some changes to the global shipping fleets that are affecting temperatures in recent years. We have bigger ships with deeper holds. You have all these giant cargo ships now that you didn't necessarily have as many of 20 years ago, and, if the hold of the ship is deeper, for example, you're measuring the ocean water at a deeper depth, that ocean water is going to be a bit colder. And so things like that will affect your measurements.

You know, the problem with ships is every ship is different, and all the individual factors of that ship - its hull depth, its speed - are going to affect its measurements. Whereas, something like buoys or Argo floats or satellites - every buoy is the same. They're specifically designed to measure climate data. They all have the same type of measurement system. You're not going to have any uncertainty between buoys that you have, say, between ships. Now, for the deep past and before 1990, we're stuck with ships because that's all we had. But, for the modern period, we have the luxury of having more high-tech, up-to-date measurement systems. CURWOOD: So, if you were to take your data and extrapolate it in terms of long-term warming, how much trouble are we in now as a civilization?

HAUSFATHER: It depends a lot on how much greenhouse gases we emit in the future. In a business-as-usual world where we do nothing to cut emissions, we could see somewhere around four degrees Centigrade, close to nine degrees Fahrenheit warming globally. To put that in perspective, the difference between the middle of the last Ice Age and today was only about nine degrees Fahrenheit globally, so we're talking about potentially very large disruptions to ecosystems, to food production, factors like sea level rise, ocean acidification, that all have the potential to seriously disrupt future society.

Now, that's in the business as usual world. If we take aggressive action to reduce emissions and the global agreement between pretty much between every nation in the world at Paris last year was a good first step down this path, we could limit warming by 2100 to only two degrees Centigrade, or about just under four degrees Fahrenheit, which would've some effects, but those would be much smaller than in a world we do nothing.

CURWOOD: Why do you think some Republican lawmakers were so unwilling to accept the revised NOAA paper?

HAUSFATHER: So, part of the problem is that climate change in general has become a political hot button issue, and, unfortunately, it means that the way that the people interpret the science is shaped by their preconceptions and by what they think may be the implications of that science. And I think a lot of people who wanted to dismiss or sort of downgrade the importance of climate change had been focusing a lot on this apparent pause in recent temperatures, and when NOAA revised the records to show that, wait a minute, a lot of this apparent pause was due to an error in how we measure ocean temperatures, that wasn't very palatable to them, and so I think it wasn't so much because they deeply understood the science involved and thought NOAA had made some sort of mistake. It's that they didn't like the implications of their results, and, in general, the way science works is, when you disagree with the result you don't go after the scientists' emails, you ask other scientists to replicate it. And what Congress should have done is ask the National Academy of Sciences, which is an institution set up by Abraham Lincoln to advise Congress on scientific matters, to look into this if they think that a government agency like NOAA is not doing its job properly. 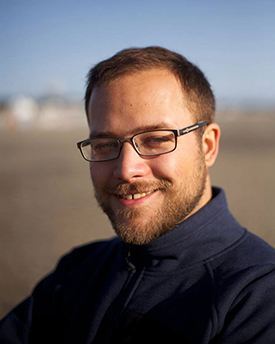 CURWOOD: Scientific approach generally says that sooner or later what we think is true today won't be true in the future, that we'll find a new information that better informs us. How do you take that fact of scientific life and blend that with the policy world that wants a decision, that wants clarity?

HAUSFATHER: It's a challenge. Science is all about uncertainty. The only certain things in life or death and taxes as we like to say, but to be honest, policymakers aren't very certain about things either when they're deciding the implications of tax policy or the effects of the change in educational policy. The problem in a lot of cases is that people interpret, “This is uncertain,” as “We know nothing”. Scientists have said multiple times that we're 95 percent certain that the majority of warming in recent years is due to humans. Ninety-five percent is a pretty good number. If 19 out of 20 doctors you talked said that you had a tumor, you probably would want to do something about that, even if that one out of 20 was less sure.

CURWOOD: Zeke Hausfather is a research scientist at Berkeley Earth. Thanks so much for taking time with us today.

Mashable.com: Background on the controversy between NOAA and the GOP