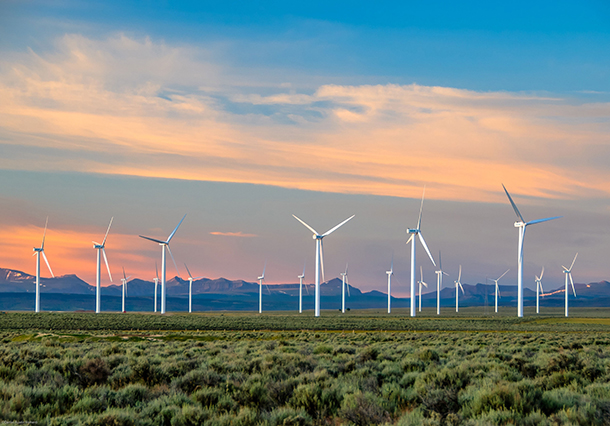 The economic feasibility of wind farms like this one in Uinta County, Wyoming would be seriously threatened should the state senate pass a new, especially pro-coal, bill. (Photo: Daniel Hoherd, Flickr CC BY-NC 2.0)

Peter Dykstra and host Helen Palmer examine proposed legislation in Wyoming that would ensure renewable energy cannot be used in the state for power generation, and the reluctance of the EPA to pay compensation for a disastrous mine waste spill. Also in environmental history, they note a trio of aviation firsts that include one mishap that might have left a hydrogen bomb underneath Greenland’s melting ice.

PALMER: Off to Conyers, Georgia now to find Peter Dykstra of DailyClimate.org and Environmental Health News, EHN.org. He’s here with some insights from beyond the headlines. Hi Peter!

DYKSTRA: Hi Helen. With all the attention on Washington D.C. this week, let’s just transport ourselves a couple of thousand miles away from there and ponder a strange development in the Wyoming legislature. A bill in the Wyoming Senate would pretty much outlaw the use of wind and solar energy by the state’s electric utilities. If the bill becomes law, power companies would pay a fine to the state for using any energy from large-scale wind or solar projects.

PALMER: Hmmmm ... do you think might just have something to do with the fact that Wyoming is the largest coal-producing state in the country?

DYKSTRA: It just might. While other states are setting up renewable energy standards, Wyoming might be headed to an anti-renewable standard. It’s no secret that the demand for coal is shrinking, though it’s still mighty popular in Wyoming, where coal produces almost 90 percent of the state’s electricity. Critics say the bill would lash the state’s fortunes to a declining industry, and in any event, guaranteeing a strong market for coal in the least-populous state in America isn’t going to put a dent in the coal industry’s sagging prospects.

PALMER: Well, how likely is this to become law?

DYKSTRA: That’s not clear, but it’s worth noting that a state senator from Gillette, that’s Wyoming’s coal capital, says he’s not sponsoring the bill because Wyoming’s sparse population can’t even use enough coal to make a difference. 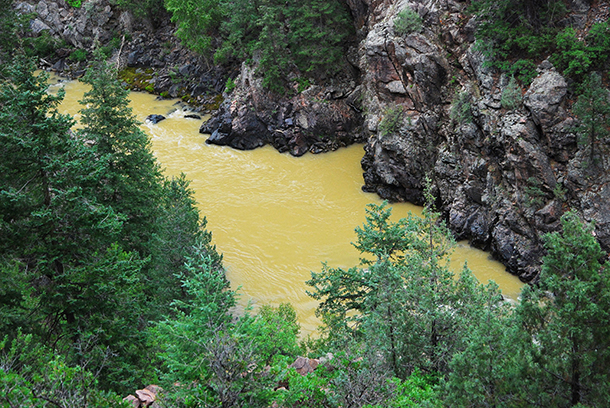 The Animas River, a major tributary of the Colorado River System, temporarily developed a mustard hue after a mine waste spill in 2015. A group of farmers, ranchers, recreational interests and the Navajo Nation say the spill was the EPAís fault and demand that the agency agree to compensation for damages. (Photo: US Coast to Coast, Flickr CC BY-NC-SA 2.0)

DYKSTRA: Well, the EPA doesn’t exactly need to find new reasons for rural America to hate what it does. Or in this case, what it doesn’t do. Remember that accidental mine-waste spill that turned the Animas River in Colorado and New Mexico the color of a school bus in 2015?

DYKSTRA: Right and mine waste, including cadmium, lead and arsenic found its way into the river. More than a billion dollars in damage claims came in, but the agency says it’s not going to pay any of them, citing the Federal Tort Claims Act, which shields some government actions from damage claims. Senators and Congressman from the area are outraged, including some Democrats who normally support the EPA and its mission.

PALMER: Well, it does seem a bit odd that an agency whose mission includes making polluters pay for damage doesn’t want to pay for its own pollution.

DYKSTRA: Right. The 73 claimants include farmers, ranchers, recreational interests and the Navajo Nation and they have six months to take the Feds to court to try and get compensated. For its part, EPA says some of the damage claims may be bogus, and they add that a few are outlandishly large.

PALMER: Well, as you said, the EPA is one agency that doesn’t have to go out of its way to make itself unpopular – and the prospective head of the agency doesn’t love it either. Let’s take our weekly stroll through environmental history, shall we?

DYKSTRA: Surely. I’ve got a tripleheader of aircraft-related anniversaries. This week in 1970, the first commercial flight of the Boeing 747 -- the jumbo jet -- took off from New York’s Kennedy Airport and landed at London’s Heathrow Airport six and a half hours later, delivering over 400 passengers and setting new standards for airborne luxury.

PALMER: I believe it also set new standards for fuel consumption as well.

DYKSTRA: They don’t measure it in miles per gallon. It’s five gallons per mile according to Boeing, which is next to nothing compared to the plane that was introduced almost six years later to the day, the Concorde. Flying at supersonic speed, the Concorde could make the New York-London run in three and a half hours, burning fuel at a rate about 40 percent faster than the 747. Environmentalists fought the Concorde’s introduction, fearing two things that never actually happened -- massive bird kills and destruction of the ozone layer. 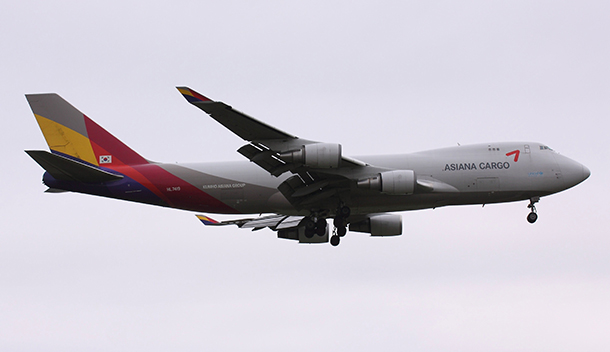 This week marks the 47th anniversary of the first commercial flight of the Boeing 747, the ìjumbo jetî. With this inaugural trip, the plane broke records for its fuel consumption rate: It gets just 0.2 miles to the gallon of gasoline. (Photo: Dean Morley, Flickr CC BY-ND 2.0)

PALMER: Well, we did find some other ways to damage the ozone layer.

DYKSTRA: True enough. But high fuel costs and a catastrophic accident in the year 2000 helped end the Concorde’s run. Its last flight was in 2003. Got time for one more plane truth?

DYKSTRA: This week in 1968, a cabin fire aboard US Air Force B-52 forced the plane to ditch while trying an emergency landing at Thule Air Base in northern Greenland. One of the seven crewmembers died, but the plane’s payload was lost -- four hydrogen bombs. In the search that followed, the Pentagon said that all of the bombs were “accounted for.” But classified documents released years later suggest that “accounted for” didn’t mean they were all recovered. There’s speculation, but no admission, that one of the four H-bombs is still out there, possibly beneath the unstable ice along Greenland’s shores.

PALMER: Well, that certainly would be a vey nice discovery as the Arctic ice melts away. Peter Dykstra is with Environmental Health News, that’s EHN.org, and DailyClimate.org. And thanks very much for talking to us, Peter. Talk to you soon.

DYKSTRA: Thanks a lot, Helen. Talk to you soon.

PALMER: And there’s more on these stories on our website, LOE.org.


InsideClimate News: “Wyoming Bill Would All But Outlaw Clean Energy By Preventing Utilities From Using It”