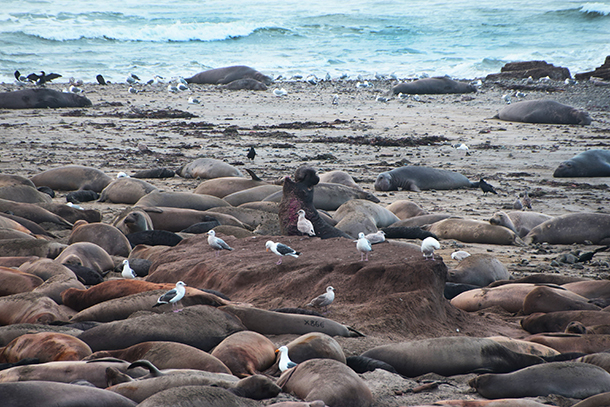 Northern Elephant Seals, the size of SUVs, haul out on the beaches of Año Nuevo State Park in California by the thousands in February to give birth and mate. The park has set up a live webcam so anyone can tune in to see the drama, and host Steve Curwood called up State Park Interpreter Mike Merritt to watch and discuss the seals.

CURWOOD: Now, February isn’t just the month for roses and candy for us humans, it’s also the month of new pups and hot-blooded males amid the sand and seaweed on some special beaches in California.

In Año Nuevo State Park, between Santa Cruz and San Francisco, thousands of Northern Elephant Seals return each year to give birth, breed, and molt their skin. Park Interpreter Mike Merritt works closely with them, and they’ve set up a webcam there so anyone can see these enormous animals close up, very personal and truly Living on Earth.

We tuned in for a look and called up Mike Merrit. Welcome to the program!

MERRITT: Thanks so much for having me.

CURWOOD: So, we have your webcam going here, and for those of us who can't see what we're looking at, what are we looking at?

MERRITT: Well, we're looking at Northern Elephant seals. They are pinniped in the animal family, and they come to Año Nuevo State Park all throughout the year, mainly in the winter to breed, and our video here is showing us out on the beach, and you can see quite hundreds of animals here. There's big animals, those are the males. There's medium size, those are the females, and of course there are little black ones and those are the pups, just born this year.

CURWOOD: So, tell me about the noises that we're hearing. 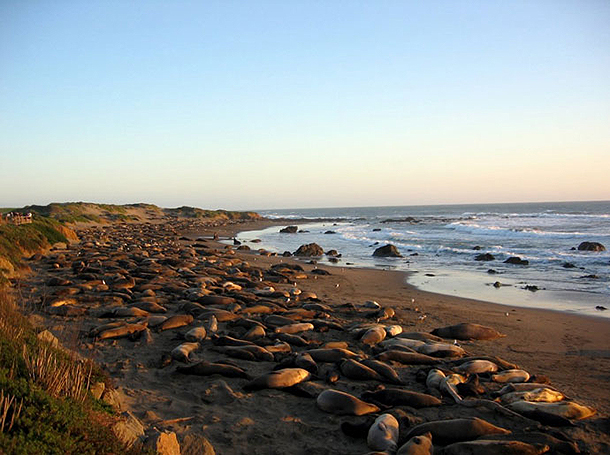 In February, beaches like those at Año Nuevo are home to thousands of northern elephant seals (Photo: Amit Patel, Flickr CC BY 2.0)

MERRITT: Yeah, elephant seals are kind of known for their noises. The male really stands out. It's a very low guttural sound. I once had somebody say it sounds like a Harley-Davidson starting up in an empty garage. And it can be heard miles away. It's really fantastic, and so every once in a while they'll belt out their noises. They're doing that to warn other males to stay away. Lots of communication between the males in that. We'll also hear the females.

CURWOOD: Wait a second. We see one of those big guys – male, I guess - climbing up on top of a smaller one, I guess a female, but she's not...

MERRITT: Yeah, he wanted to mate with her, but because he stopped, it meant something bigger scared him away. There's a lot of intimidation going on here on the beaches to the big males.

CURWOOD: So, my God, the noses on the front of these guys. I mean, they're humongous. Tell me about that.

MERRITT: They are. That's a sort of a sexual characteristic of the Elephant seals. It's kind of like guys with beards and things like that. Only the males have them, and that nose, the older they get, the bigger it gets. I've seen noses from large males that hang down like a Christmas stocking full, and of course, that's where they get their name from. It doesn't really do anything for them, except help show off how big they are.

CURWOOD: How big are they? Because they're not the size of elephants, they get their name from that proboscis, that nose hanging down like an elephant. But just how big are they?

MERRITT: Yeah, that's a good question. Well, they max out at about 5,000 pounds.

CURWOOD: Oh, my. Now it looks like two of them just tried to synchronize their barking, grunting, what's that all about? 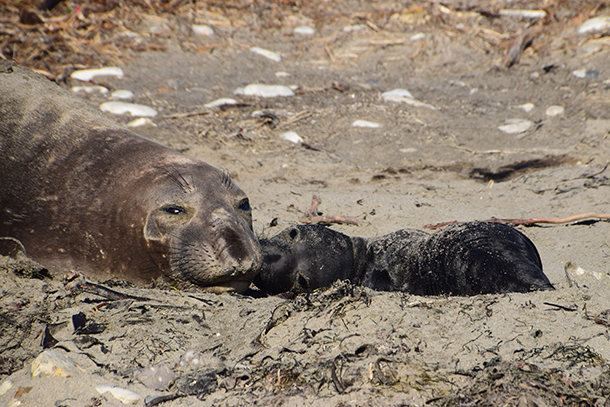 A female elephant seal and her pup along the beaches of Año Nuevo (Photo: Mike Merritt)

CURWOOD: The littler guy is moving away here, huh?

MERRITT: If they do fight, they don't really fight to kill. That's not their prerogative. They're just fighting to intimidate and dominate. And it's kind of like a boxing match. They kind of like duke it out for a while, and someone backs down.

CURWOOD: So, tell me about this particular colony. How long have they been coming to Año Nuevo, do you think?

MERRITT: Well, that's a great question. So, we actually have an island here about a quarter mile away, and they first came there in the 1950s. They had been decimated as a population, and they had been slowly coming back, and our island offered refuge. There are no predators, no people there. So they colonized that, and they spilled over to our mainland, and today we have about 10,000 animals that come back to our park each year.

CURWOOD: What's their health as a species? I mean how endangered are they, if at all?

MERRITT: Well, they're actually not endangered, but they were an really epic conservation story. They were hunted for their blubber just like a whale. You can render oil out of these animals, and of course, in the 1800s, there was a big demand. They are estimated to have gone down to just about 100 animals. There was one island off the coast of Baja Mexico called Guadalupe Island, and it was the last refuge for Elephant seals. It's kind of remote, it's kind of out there. Luckily, Elephant Seals were migrating when hunters would appear, and so it just so happened that they thought they were extinct. In fact, three times they claimed this animal was extinct, but they weren't, and they survived. And soon, oil dropped in demand, we gave them protection, and from 100 animals we now have over 200,000 Northern Elephant Seals, and they're not endangered or threatened. They're thriving right now.

CURWOOD: So, they must be close cousins then, huh?

MERRITT: Well, there you go, yeah, so you asked their health. They are all healthy animals, but there is this kind of worry that, if they get sick, if there's a big disease comes through, it can really wipe them out because their genetic bottleneck is very small. It's going to take eons of generations to break that up.

CURWOOD: By the way, what do they eat?

MERRITT: Well, they are kind of deep ocean-bottom dwellers. They love squid, but they'll eat skates, rays. They actually eat small sharks. It's kind of ironic they eat small sharks and get eaten by big sharks - and they also eat a lot of microscopic animals that are along the ocean floor.

CURWOOD: So, ocean floor. What kind of diving ability do they have? 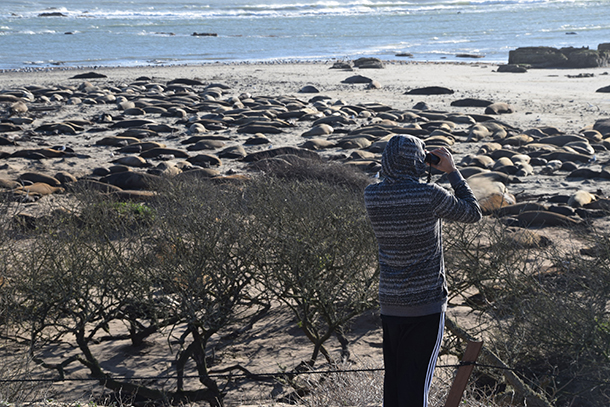 Although the elephant seal camera exists because Año Nuevo Island is off-limits to the general public, visitors to the state park are allowed to view elephant seals on the mainland through guided walks. (Photo: Mike Merritt)

MERRITT: Well, Steve, you really hit on one of the big things about these animals. They are diving machines. The Elephant Seals can dive over a mile deep, mainly the females, and they can hold their breath for up to two hours at the extreme. The males will dive along the Pacific coast up and along Aleutians of Alaska. They're vastly large migrators, too. These animals migrate twice a year, so they're going to the north Pacific and back twice, and the females actually just broke records. There was one female - Her actual name was Phyllis - and she swam beyond the international date line out on the Pacific which never been recorded before. So, they're still breaking records to this day.

CURWOOD: Wow. So, there's quite a few animals there. What do they do for food? There's a lot of chubby folks there. I imagine there's not that much food handy.

MERRITT: There is not. No. The only ones eating are the pups. They're the ones nursing with their mothers. But the rest of them, the males and the females and mothers, they are not eating. They're only living off their blubber, which is why, when a female shows up, she gives birth within five days, super quick, and then she feeds her pup for 28 days, and then she leaves. She doesn't teach the little guy how to swim or avoid sharks. She just gets out of here because she's hungry. She has to go back in the water.

CURWOOD: Wow. And so who takes care of the seal pups then, the guys?

MERRITT: No. There's no family structure here. There is a mother and a pup. The males really don't care about the pups. They could be rocks. They're in the way. The little guys, the pup, they get weaned. So, we actually call them “weaners” here, and these weaners will run around and kind of like find each other. They've all lost their mom, and they'll band together and then they'll slowly go into the water and they'll learn how to swim, and that migration instinct will kick in, and off they go into the Pacific to migrate and to feed. But, because no one's taught them anything, only 50 percent of this generation will return. The mortality rate the first couple of years is pretty high. But, if they can make it until four years old, they'll be pretty good the rest of the way. 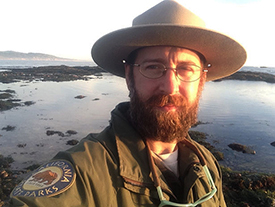 Mike Merritt is a State Park Interpreter with Año Nuevo and works closely with the elephant seals who call this place home (Photo: Mike Merritt)

CURWOOD: Now, some of this noise, it looks like the pups are talking to each other there?

MERRITT: Yeah, we see some that are nursing with their mother. And, yeah, they have this kind of monkey-like cry. It also kind of pierces the air when you're near them. And that's them, always calling for milk or calling for mom. And actually, I heard a few years back they actually used the noises of the pups in the Lord of Rings movies for the orcs and goblins.

MERRITT: So, you made have heard it before, yeah.

CURWOOD: Mike Merritt is an interpreter at Año Nuevo State Park. Mike, thanks for taking the time with us today.

MERRITT: Oh, it was my pleasure.

CURWOOD: And there's a link to the web cam at our website, LOE.org.

Video for the webchat

Sacramento Magazine: “Sex on the Beach”