Standing Up for Science 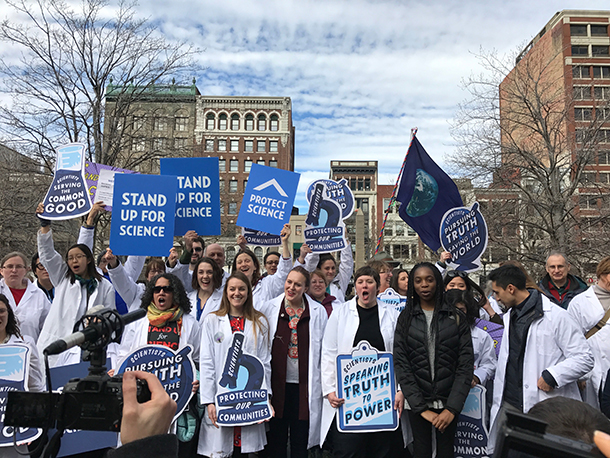 Hundreds of scientists and supporters rallied in Boston’s Copley Square on February 19th, 2017, to affirm the importance of science, research, and factual reporting of results. Early moves by the Trump administration, including gag orders and travel restrictions from some countries, raise fears of political interference, data loss and censorship. Living on Earth’s Jenni Doering and Jaime Kaiser report to host Steve Curwood on the mood at the rally, and the message from the square.

CURWOOD: From PRI and the Jennifer and Ted Stanley Studios at the University of Massachusetts, Boston, this is Living on Earth. I’m Steve Curwood.

CURWOOD: In Boston’s Copley Square, barely a stone’s throw from where, two and a quarter centuries ago, American patriots came together to oppose repressive policies of the ruling regime, a new kind of opposition is taking shape. Hundreds of scientists crammed into the square – along with plenty of media – including Living on Earth’s Jenni Doering and Jaime Kaiser. Jenni, describe the scene. 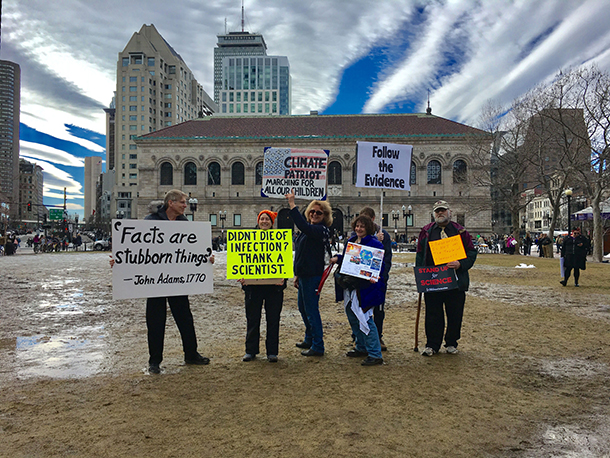 A crew of activists with their homemade signs. (Photo: Jaime Kaiser)

DOERING: Well, Steve, it was a crowd of several hundred, far smaller than the thousands that turned out for the Women’s March in Boston a month ago. But just like at that march, there were a lot of homemade signs, and families with kids, even some kids swimming in white lab coats that said “Future Scientist.”

GIRL: I’m one of those geeky kids. Science is part of my life and it’s just really important to everybody and obviously it does so much and it helps us discover so many things and explain so much and we can understand a lot about what our world is.

DOERING: She was there with her dad and two younger sisters. The middle sibling chimed in. 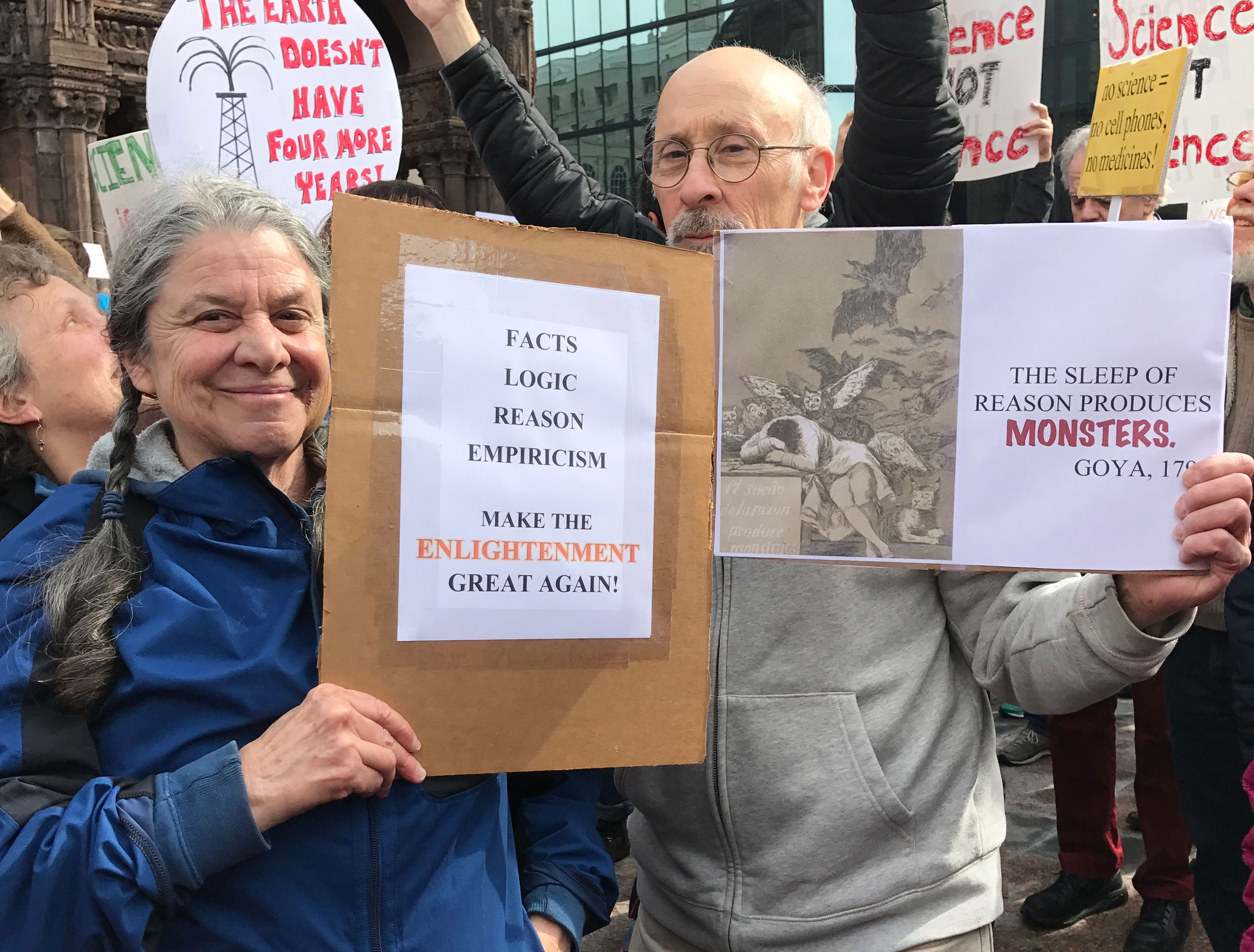 One protestor used an etching and a quote from the Spanish romantic painter Goya, and a play on President Trump’s campaign slogan “Make America Great Again,” to make a point about the importance of reason. (Photo: Jenni Doering)

CURWOOD: So it seems people at every stage of their scientific careers showed up, huh? What else did you notice?

DOERING: [FADE IN CHANTS] Well, there were familiar chants, of course...

DEMONSTRATORS: When science and research are under attack, what do we do? Stand up fight back! We’re here in alliance, standing up for science!

DOERING: And as you might expect of a rally of scientists, many of the signs were clever, and in some cases more interdisciplinary than you might think.

MAN: Well, it’s a Goya print, an etching in which a man is sleeping and monsters are in his dreams and it says, ‘The Sleep of reason produces monsters – Goya.’ And on the other side it says, ‘Facts, Logic, Reason, Empiricism: Make the Enlightenment Great Again.’ 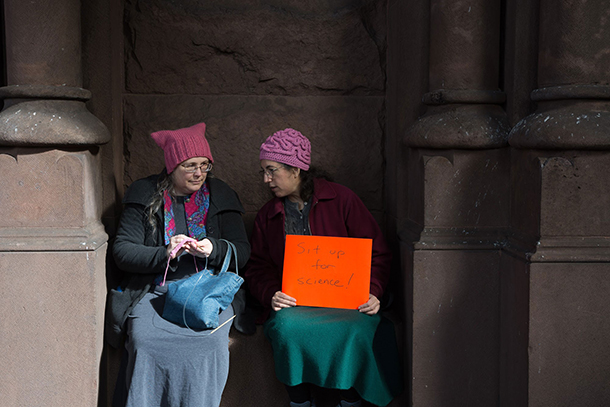 Two demonstrators commune at the entrance to Trinity Church in Copley Square. On the left, a woman wears a pink ‘pussyhat’ that echoes the many that were seen at the Women’s Marches all across the U.S. in late January. (Photo: Jarred Barber)

CURWOOD: So why did he call on Francisco Goya, the Spanish romantic painter?

DOERING: Well, it was personal, actually.

MAN: I’m a big Goya fan. I teach Gothic fiction at Boston College and I never thought we’d be living in a Gothic political climate. I can’t believe that we’re having to protest in support of science! Are we going to have to protest next weekend in support of arithmetic? Because it seems the Trump administration can’t get any of this right!

CURWOOD: So, Jaime, you were at the protest, too. What struck you about the demo?

KAISER: Steve, there was simply no avoiding the fact that the word “fact” came up again and again. It was brought up by many of the scheduled speakers, and it was evoked by others in the crowd. One man I spoke with used a telling quote from history to evoke their importance. 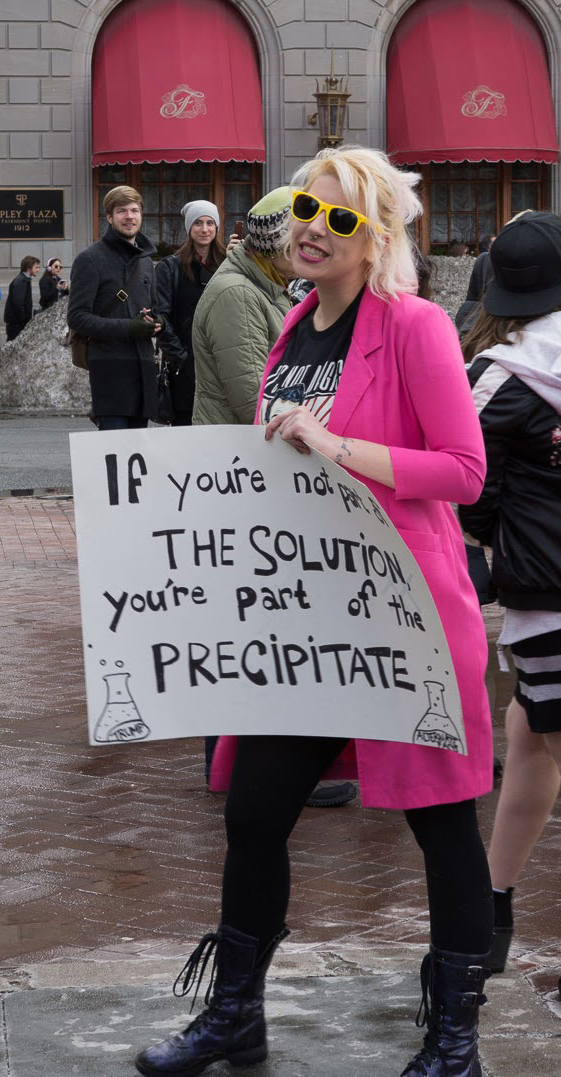 A demonstrator in a pink lab carried a chemistry-inspired sign. (Photo: Jarred Barber)

CURWOOD: Wow, a rally in support of facts! It seems, stranger than fiction.

KAISER: I thought so too. Robin Herman, a retired Dean at the Harvard School of Public Health, also had something to say about this.

HERMAN: Facts, we know, are facts. They can’t be changed by some kind of verbal jujitsu. And I was thinking this morning you know that phrase...

KAISER: She quoted a line from Lin-Manuel Miranda’s speech at the Tony Awards, just after the shooting at the Pulse nightclub in Orlando. 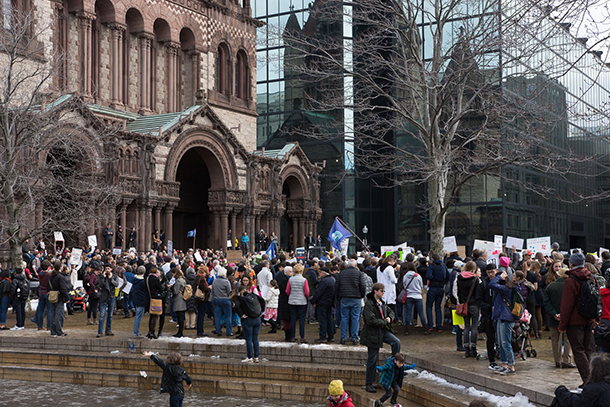 The crowd in the square was filled with scientists, families, citizens and students of all ages. (Photo: Jarred Barber)

KAISER: The event was organized to coincide with the annual meeting of the American Association for the Advancement of Science, AAAS.

CURWOOD: So, may I assume many of the conference attendees also rallied at Copley Square?

KAISER: Yes and no. Harvard Professor Naomi Oreskes, who spoke at the conference and at the rally, pointed out that some scientists just want to stick to science.

ORESKES: Some of you may have hesitated to come here today. I hesitated to come here today. We all have colleagues who didn’t come because they didn’t want to be political. So, I think it’s really crucial for us to be clear why we are here. We did not politicize our science. We did not start this fight. Our science has been politicized by people who are motivated to reject facts because those facts conflict with their worldview, their political beliefs or their economic self-interest. [CHEERING]

DOERING: But, Steve, the speakers in Copley Square weren’t just there for science. Yvette Arellano spoke about environmental justice and impacts on low-income communities of color.

DOERING: Some of those heroes were kept out of the United States by the Trump Administration’s original executive order restricting immigration from seven majority-Muslim countries. At least five scientists canceled their plans to come to the AAAS conference when the ban was briefly in place. And the AAAS leadership stated that the Executive Order would negatively affect not only students and scientists from banned countries, but also their colleagues in the US.

CURWOOD: Yes, there still seems to be a lot of uncertainty about how immigration policies from the Trump administration could affect the scientific community at home and abroad.

DOERING: That’s right, and while that uncertainty and fear did cast its shadow, on the whole, the people at the rally had a positive, fighting spirit. 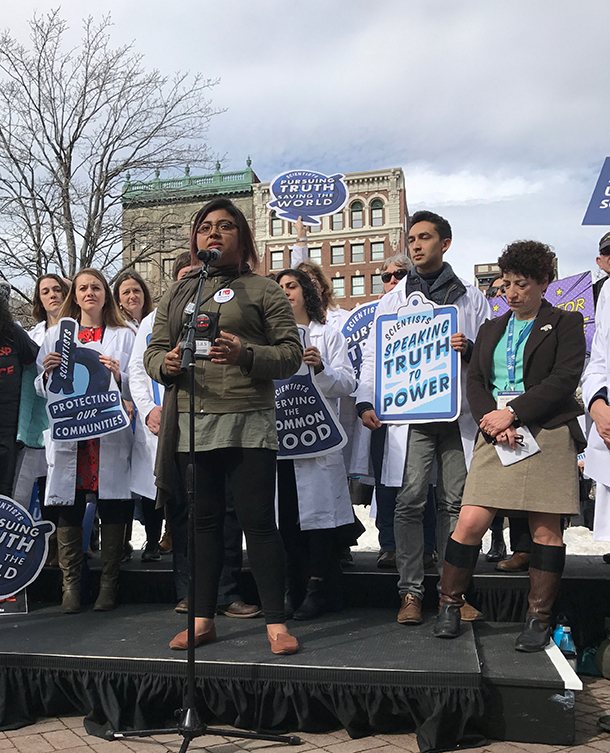 FUNKYTOWN MAN: Without optimism you just decline into despair. I mean, there’s only so much mourning one can do. We mourned a lot after the election and now just coming out and mobilizing, making a stand.

KAISER: And, Steve, you can take that man at his word. He, along with a few others, struck up an impromptu dance party as the rally was ending.

CURWOOD: [MUSIC PLAYING UNDER]: Thanks, Jaime and Jenni. That was Living on Earth’s Jaime Kaiser and Jenni Doering describing the scene at the recent Rally for Science in Boston, Massachusetts.

A summary of Naomi Oreskes’ address to AAAS attendees

More scientific signs from the rally