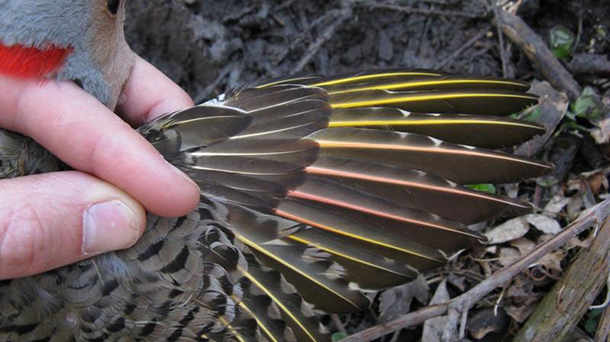 The North American woodpeckers known as flickers have red feathers under their wings in the west, and yellow feathers in the north and east. But some birds in the eastern range have been turning up with red-colored feathers. Scientists thought they were somehow breeding with their red-shafted cousins, but have now discovered they’re actually just feeding on red berries from the invasive Asian honeysuckle.

CURWOOD: It's Living on Earth, I'm Steve Curwood. In a minute -- how Charles Darwin’s theories of evolution fanned the flames of America’s civil war, but first this note on emerging science from Don Lyman.

LYMAN: Northern flickers, medium-sized North American woodpeckers, come in two varieties -- red shafted in the west, and in the east and north yellow-shafted. The two names relate to the color of the feathers under their wings. But since the red and yellow flickers interbreed where their ranges meet, there are some birds with a salmon-pink blend of both colors.

For several years, ornithologists have documented some flickers in the east sporting red-orange wing feathers, and assumed that was due to interbreeding. But some of the yellow-shafted flickers with red feathers were thousands of miles east of the nearest red-shafted flickers.

Now scientists from the Royal Alberta Museum in Canada have solved the mystery. The red color in yellow-shafted flickers’ feathers is actually due to the birds eating red berries from invasive Asian honeysuckles. Using sophisticated optical laboratory techniques the scientists determined that a pigment in the berries called rhodoxanthin causes the red color in the eastern birds’ feathers, while it’s carotenoid pigments that make the western flickers’ feathers red.

Scientists think the berries also turn the tips of tail feathers of another bird species, the cedar waxwing, orange, instead of their normal yellow color.

This change in flicker feather color isn’t just an interesting curiosity. Scientists hypothesize that this new color variation could affect mate selection if the flickers can no longer rely on normal plumage color to signal a prospective mate’s body condition and fitness.

The Cornell Lab of Ornithology’s All About Birds: Northern Flicker