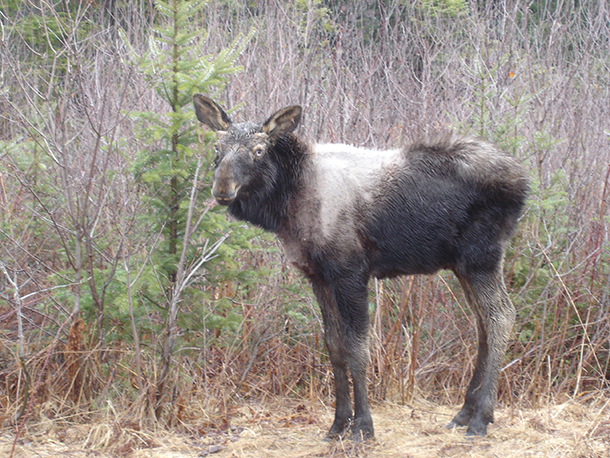 Rising temperatures and a growing tick population are causing problems for moose in New England. So many ticks now live through mild winter temperatures and attack the calves, that few are surviving. Moose researcher Pete Pekins, professor of ecology at the University of New Hampshire, told Living on Earth’s Helen Palmer what can be done to preserve the moose population.

CURWOOD: Many of you may have read that poem to a child tucked up in bed, and imagined the stately moose plodding purposefully over the hill, but the latest news about moose is much less soporific. In northern New England, they number some 70,000, but now our changing weather seems to be throwing the balance of nature out of kilter and giving an edge to perhaps the most important enemy of the moose – blood-sucking ticks. This has alarmed moose researchers including Professor Peter Pekins, the chairman of the natural resources and environment department of the University of New Hampshire. He spoke with Living on Earth’s Helen Palmer. 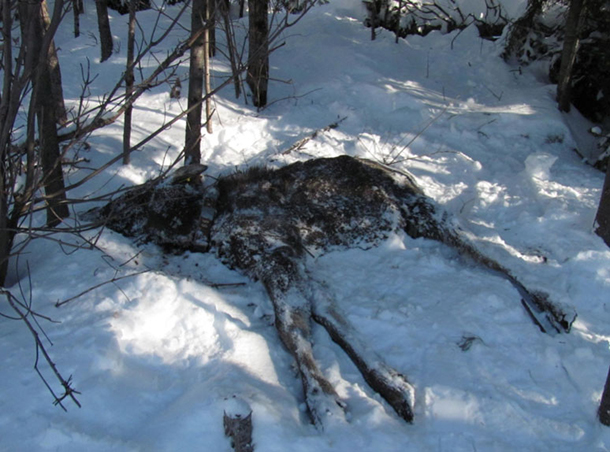 Moose calves are most likely to succumb to ticks in the wintertime. (Photo: Pete Pekins)

PALMER: The reports that I read are very upsetting. Tell me what exactly is going on with the moose?

PEKINS: For last three years, the state of New Hampshire through the University of New Hampshire and the state of Maine have been following well over a hundred moose per year that are captured in January, and we follow the mortality rate. We measure the mortality rate of these animals and the productivity of these animals. For the last three years, unfortunately, both states have averaged right around 70 percent mortality of calves and yet lower productivity than we expect from adults.

PALMER: When you say productivity, what does productivity mean in the context of a moose? 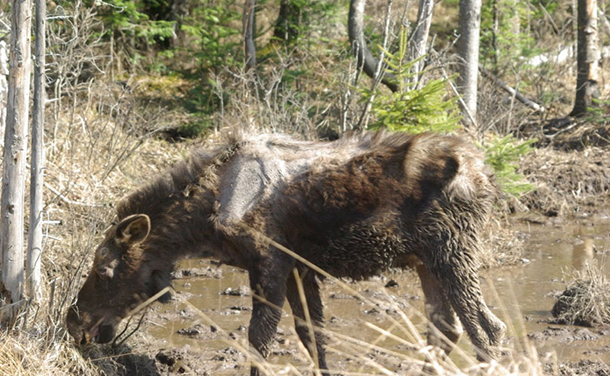 Moose calves are at a higher risk of dying as a result of a heavy tick load because of their small size and inability to replenish lost blood. (Photo: Pete Pekins)

PEKINS: Productivity refers to the number of calves produced per cow and then the survival of those calves over time. And this has been 99 percent associated with extreme heavy loads of the winter tick, a parasite of the moose. The tick load these calves are carrying eventually results in their death, and this death occurs in late March through mid-April. Probably 85 percent of the deaths occur at that time, and that's directly associated with the adult female tick taking her blood meal which can be two to four milliliters of blood per tick.

PALMER: So, how many ticks would there typically be on a moose? I mean, what we talking about?

PEKINS: Right. So, the range has been 35,000 to 95,000 ticks per hide, and, in general, if you're over 30,000 ticks, you're going to have a problem. So these animals simply die from acute anemia and massive weight loss because they simply can't replace this blood loss volume that quickly.

PALMER: Well, typically, the host and the parasite are in pretty good equilibrium. What exactly is it that's changed the equilibrium here?

PEKINS: You need two fundamental occurrences to have this massive mortality. One is you need a very high moose density and two, you need cooperative weather. So, over time as our weather patterns have changed, it's not surprising that we would have these events, but to have three in a row was really unprecedented in our knowledge of this host parasite system.

PALMER: So, what can you do about it? I mean, can you treat the moose to get rid of the ticks?

PEKINS: Well, you know, it's funny. That's what the typical question is, but that raises all types of issues. Should we be treating wildlife to break up a natural system? In New Hampshire, we have a saying, "Keep the wild in wildlife", and the other way to think about this is, perhaps you just bring down the density of moose. 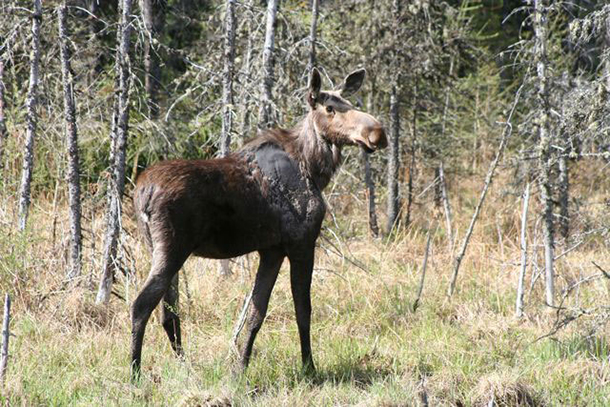 A female moose who has lost weight, hair, and skin because of the moose tick. (Photo: Jennifer Jilks, Flickr CC BY-NC 2.0)

PALMER: What about treating the landscape with insecticide? Would that work?

PEKINS: In theory it would, but the other thing to remember is, you're talking about a very large geographic area. You're also talking about an animal that has a very large home range, and, in general, the public is not too supportive of large spraying operations, be they herbicides or insecticides or whatever. I'm not an advocate of it. Could you do it? Yes, nothing is impossible, but is that the right choice? I don't think many people with strong environmental values would favor that type of interjection of human management.

PEKINS: You can hope the weather changes. [LAUGHS.] Some people, I think, have strong beliefs that climate change is not real, and so the argument for that would be that, by having as many animals left on the landscape, that that larger population would be there to respond when winter starts occurring around the first week in November again. What's interesting to think about is there's a growing proportion of the human population that doesn't think winter begins in November anymore in New England, and so the change is very real, and so you're really left at either accepting this or the only proactive approach would be to institute a higher harvest to bring down the density of moose because that could effectively break this relationship. You would reduce mortality of calves, and you would increase the relative health and condition of the adult moose.

PALMER: So, you're talking about hunting moose or maybe just actually a wildlife cull.

PEKINS: I would be referring to harvest, not a cull, and that can be done in a reasonably conservative manner if an state or agency decided to go that route. I personally think that there would be a bit of a social outcry about that because it's a very counterintuitive approach to what is clearly a slow decline in a population. 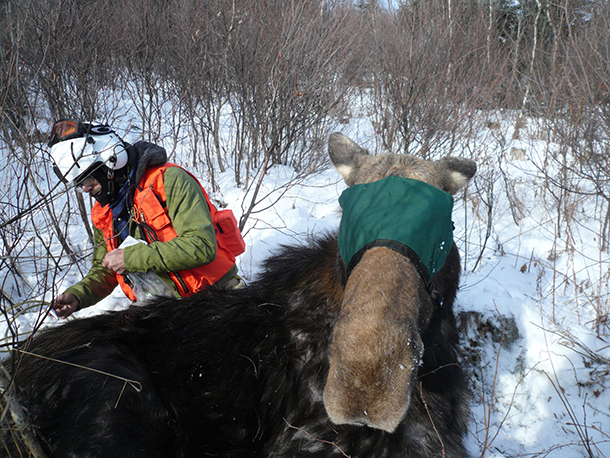 A New Hampshire moose being collared in 2014 for a study of the impact of winter tick and other health threats. (Photo: New Hampshire Fish and Game)

PALMER: I would think that most people would prefer the idea of a selective harvest or reduction of the population to seeing these poor calves effectively wasting away.

PEKINS: It's an image that doesn't leave your mind, and you are left with this feeling that, “What a waste.” The other part of this that goes on is that the adults are also not in optimal condition. We know our productivity levels are lower. We know that yearling moose, that 10 years ago about 30 percent of yearling females were breeding. We have almost no yearling females breeding. It’s my hypothesis that this is the physiological penalty they pay for a high tick load. They don't pay with their life, but they pay with their productivity. And this is all contributing into this decline in the population.

CURWOOD: Peter Pekins is a Professor of Wildlife Ecology at University of New Hampshire in Durham. He spoke with Living on Earth’s Helen Palmer.

National Geographic: “What's a Ghost Moose? How Ticks Are Killing an Iconic Animal”