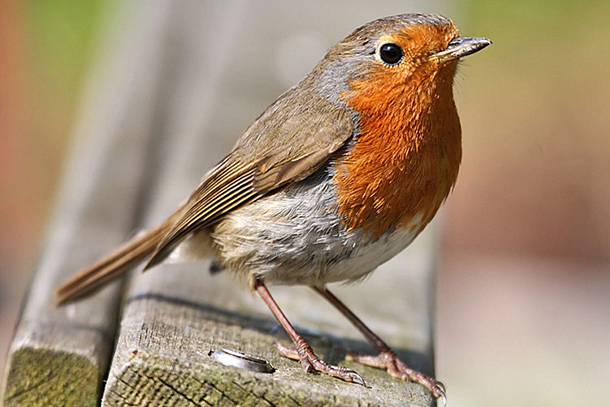 The “Robin RedBreast”, or European Robin, is a cultural touchstone in the U.K., where its seasonal arrival heralds spring and is a sign of good luck. BirdNote’s Mary McCann reveals the mythical origin story of this beloved bird.

CURWOOD: One of the most beloved harbingers of spring is the robin. But as Mary McCann points out in today’s BirdNote, our devotion to the robin is nothing compared to feelings for the pint-sized version across the pond.

The American Robin rates as one of our best-known birds.

The roots of its common name lie in Europe, though, and a distant relative, a bird not much bigger than a chickadee: the European Robin.

Like the American Robin, the European Robin is a bird of yards and gardens and has a red-orange breast, so it’s often called “Robin Red-Breast,” or just “Robin.”

And it’s something of a cultural touchstone in the UK. The Robin Red-Breast’s seasonal arrival harkens Spring. It’s been said to signal good luck. And its likeness turns up everywhere from Mother Goose rhymes, Peter Rabbit stories, and whiskey labels to postage stamps and Christmas cards. The little robin pops up in European folklore, too, including Norse mythology, where it was sacred to mighty Thor.

And as for its breast color — One account has it that when the robin visited souls in Purgatory to refresh them with water, its breast was scorched to its current shade.

On at least two occasions, the Robin Red-Breast has won the popular vote to become the UK’s unofficial national bird.

So clearly, although small, it packs a mighty, symbolic punch. 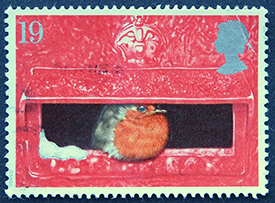 CURWOOD: And if you’ve never seen Robin Redbreast, or even if you have, flutter over to our website LOE.org for some photos.

Learn more about the European Robin on the BBC Nature website