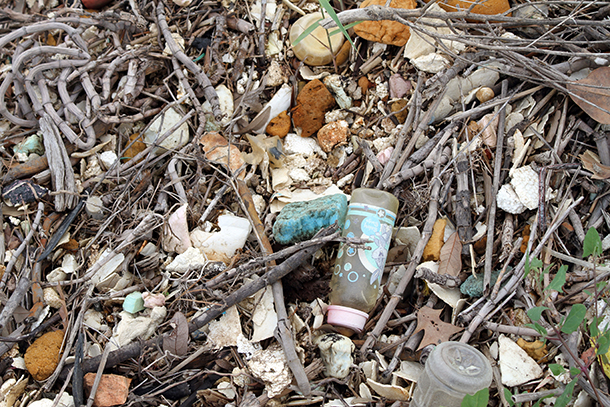 Litter collected on the 2012 Clean the Bay Day in Portsmouth, VA. The Trump Administration’s expected EPA budget cuts would slash conservation funding for the Chesapeake Bay by 93%. (Photo: U.S. Army Corps of Engineers, Flickr CC BY 2.0)

This week, Peter Dykstra and Host Steve Curwood assess the risks from potential Trump-approved EPA budget cuts and share new information tying the suspects of the 2016 murder of Honduran activist Berta Cáceres to US military training. Then, the two remember how conservation legislation brought the American Alligator back from the brink.

Let’s see what’s up beyond the headlines now. Peter Dykstra of DailyClimate.org and Environmental Health News, that’s EHN.org joins us from Conyers, Georgia. Peter, hey, how are you doing today?

Let’s start with the Trump administration’s leaked proposals to slash major parts of EPA’s budget, with some of the deepest cuts seemingly fixated on crushing some iconic American environmental successes, regardless of cost or controversy.

The Great Lakes used to be a poster child for American water pollution – The near-death and then the recovery of Lake Erie, invasive species like lampreys and zebra mussels, and, of course, the multiple times back in the day when Cleveland’s Cuyahoga River caught fire and burned.

CURWOOD: Yeah, the problems there are stuff of legend, but the recovery has been strong, as you point out. You’re thinking that’s about to change?

DYKSTRA: Well, draft budget cuts to EPA’s Great Lakes Restoration Initiative would kill all but three percent of its funding. In the words of one observer, “If we lose EPA, we lose Lake Erie. Again.”

CURWOOD: And what about other, similar programs?

DYKSTRA: The project to restore San Francisco Bay’s wetlands, efforts to reverse decades of nutrient pollution in Chesapeake Bay, and in that one the funding is cut by 93 percent. There’s potential elimination of EPA’s environmental justice efforts, and this one, which to me is just crazy. EPA’s successful, non-controversial EnergyStar program , the one that saves consumers billions of dollars by steering them to the most energy-efficient, big appliances like dishwashers and refrigerators. According to some reports, EnergyStar’s plug could be pulled. The source of these reports is not EPA, but the federal Office of Management and Budget, which would oversee the apparently big changes at the environmental agency.

Protesters demonstrated outside the State Department following the murder of outspoken Honduran environmental justice activist Berta Cáceres in 2016. Two army officials arrested for her murder were trained at the School for the Americas in Fort Benning, GA. (Photo: Slowking4, Wikimedia Commons CC BY-NC 2.0)

DYKSTRA: Uh-uh, Steve, not today. A report by journalist Nina Lakhani in The Guardian has found second-hand American fingerprints on the murder of Honduran environmental activist, Berta Cáceres. Berta was murdered in her home just a year ago this month, after reportedly enduring 33 death threats for her opposition to a hydro dam. In 2015, she won the Goldman Environmental Prize, which is sort of the Nobel for environmental activists.

CURWOOD: Yeah, that’s right. We reported on her winning the Goldman. As I recall, several Honduran soldiers were arrested for her murder. Where does it all stand now, and what’s the U.S. tie-in?

DYKSTRA: Well, two of the eight men arrested were Honduran army officers who received military training in the U.S., Major Mariano Díaz was Chief of Honduran Army Intelligence -- He was discharged right after his arrest -- and Lt. Douglas Giovanny Bustillo. They both received training at the School of the Americas in Fort Benning, Georgia. The training there ostensibly focuses on stopping drug trafficking and terrorism. There’s one other Army officer and five civilians also awaiting trial for the murder of Berta Cáceres in a nation that the watchdog group Global Witness calls, “the most dangerous place on Earth for environmental activists.”

CURWOOD: OK, Peter, let’s move on to our history item for this week, have you at least brought us something more cheerful there?

DYKSTRA: Well, yeah, as a matter of fact I have. The fiftieth anniversary of what’s turned out to be one of America’s biggest wildlife protection successes.

In March, 1967 the American alligator was declared endangered under a precursor law to the U.S. Endangered Species Act, which didn’t exist until six years later. Habitat loss and an unregulated trade for alligator meat and skins had nearly wiped out the somewhat less-than-lovable critters. Commercial hunting had already been banned in 1962, and the 1967 ruling protected alligators’ habitat. Over the next quarter century, ‘gators enjoyed a spectacular comeback. 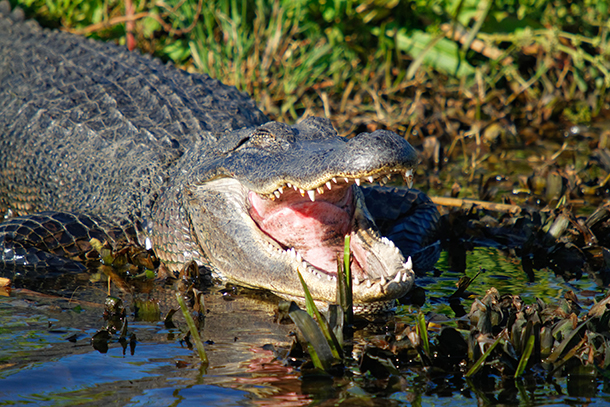 CURWOOD: Yeah, it’s one thing to find public support for a big, cute animal like a manatee, but I gather ‘gators had to battle a PR problem in addition to overhunting. Maybe it's the teeth.

DYKSTRA: Well, battle it they did, and they won the survival battle. And thirty years ago, in 1987, they were removed from the endangered list. Today alligators range from Texas to the Carolinas, not to mention the indestructible urban myth that they inhabit the sewers of New York City.

CURWOOD: Of course, they’re down there, Peter. Come on! Peter Dykstra is with EHN.org and DailyClimate.org. Thanks. I’ll talk to you again real soon.

SF Gate: “Will SF Bay wetlands restoration be a casualty of EPA cuts?”