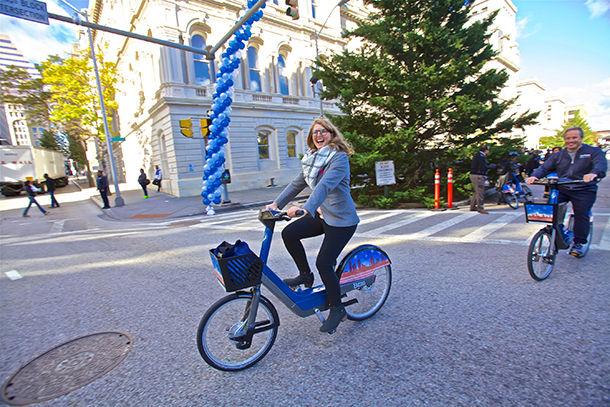 Women in the US face many hurdles when it comes to traveling around on two wheels. Living on Earth’s Savannah Christiansen reports on problems at the intersection of gender and bicycles, from personal safety concerns to the availability of bike paths separated from road traffic.

CURWOOD: In many parts of Europe, bicycles seem to be everywhere, especially in countries like Denmark and the Netherlands, where bikeways are filled with men and women, young and old, and commuters dressed for work or school. But in the US there are few bike paths and relatively few women are out there on two wheels. Bike advocates say part of a proposed $1 trillion spending on infrastructure could be devoted to bicycle safety, which could help narrow the gender gap in pedal power. From Boston, Living on Earth’s Savannah Christiansen has our story. 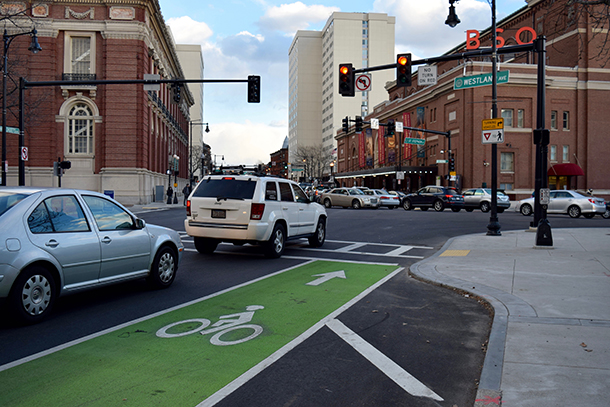 CHRISTIANSEN: Less than a quarter of people who commute by bicycle nationally are women. And the many factors that make streets seem unfriendly to bike riders hit women especially hard.

MULLIGAN: People are turning, doors are opening and I am nervous a lot about that. I’m impressed by people who bike to work and, like, it’s a good routine to be in, but I don’t know that I could see myself…I feel like it’s stressful and I end up sweating a lot [LAUGHS]. I couldn’t be going to work after.

CHRISTIANSEN: That’s Tufts University student Danielle Mulligan. The need to look presentable at work can rule out commuting by bicycle, especially for women. Student-teacher Lois Moon points to another problem.

MOON: A big one is cars stopping all over the place. On the side of the road they often stop in the bike lane. I will say though, sometimes if a bus has stopped to pick up somebody I will, like, go around the bus, though that can also be pretty dangerous. I generally stick to the side of the road, the bike paths.

CHRISTIANSEN: In many parts of the country, there’s also ice and snow to deal with, as well as potholes and uneven pavements. And in addition to those hazards, there’s a problem with the image of bicycling. 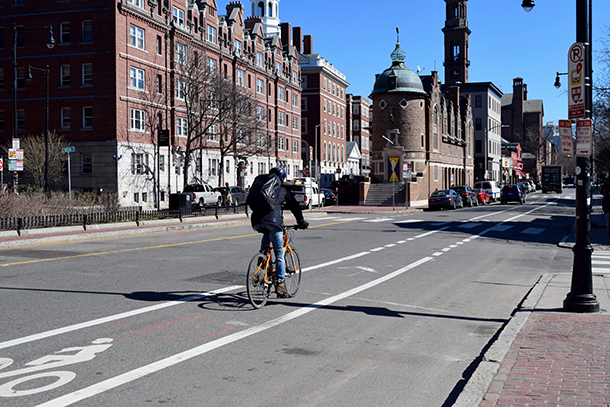 A bicyclist pedals in a bike lane in Cambridge, MA. (Photo: Savannah Christiansen)

BALMER: Over the past 30-plus years, bicycling has been from the industry’s point of view, they’ve been selling the sport of cycling.

BALMER: If you say “cycling” to majority of people in the United States, especially women, that means MAMILs: Middle-Aged Men in Lycra [LAUGHS]. That’s not what most people want to see themselves riding. 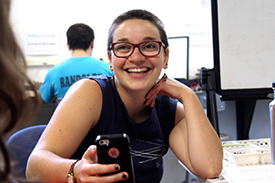 Lois Moon is a student-teacher in Brighton, MA and commutes to work and school entirely by bicycle. (Photo: Lois Moon)

CHRISTIANSEN: A major source of travel data is the Department of Transportation’s National Household Travel Survey, which hasn’t been updated since 2009. Bicycle travel is limited, compared to other possible ways of getting around, and though there’s little information on how many people travel regularly by bike, Melissa says the focus is on commuting.

BALMER: When transportation funding was from the federal level, they had to prove that they were replacing car trips by bike trips. The problem is that, over the past decade, our way of moving about and doing things has really changed. And so, right now, the majority of car trips are actually short trips rather than commuting to work, but we’re still judging whether bicycling is valuable or not by replacing commuting to work trips. 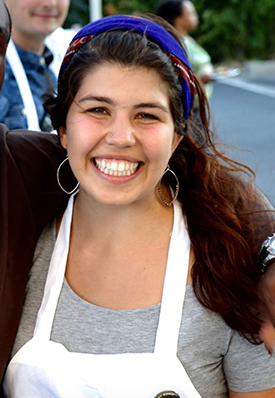 CHRISTIANSEN: And Barbara Clabots, who’s an independent environmental consultant, says that focus on commuting doesn’t capture the many ways women use their bikes.

CLABOTS: We have national data on biking to work. But if you ask women around the world what they are doing on a day to day basis, they won’t describe going to pick up groceries or moving kids around the city as “work.” So you’re really missing how women move around a city.

CHRISTIANSEN: For a start, Barbara says that women tend to feel safer using bike paths separated from the road, while men are less concerned about heading off into traffic on two wheels. Liz Cornish, the director of a livable streets organization called Bikemore, says womens’ caution may reflect how we raise our kids.

CHRISTIANSEN: At her non-profit, Pedal-Love, Melissa Balmer is collecting stories to broaden the image of bicycling with diverse tales about women who travel on two wheels. She hopes to shift the sport-driven image of bicycling and promote it as a healthy and sustainable lifestyle choice. 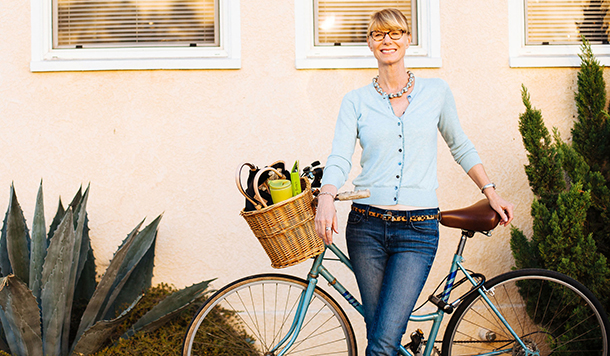 BALMER: So, when we talk at Pedal Love about storytelling, we want to talk about compassion, connectivity, and creativity that the storytelling brings. But it’s also getting women to see stories of themselves in the media about bicycling. Whether they’re 20-something, whether they’re 30-something, 40-something, 50-something, however old she is, she can get out there and ride her bike.

CHRISTIANSEN: Platforms such as the National Bike Summit or the Pedal Love website, highlight ways in which women ride bicycles to visit family, reduce commute time or travel across a city, which data often fail to capture. And Barbara Clabots says researching the differences in ways people use transportation also provides insight into other issues.

CLABOTS: When you start looking at gender data you often also end up looking at race and income data, and it reveals how we don’t know what we don’t know about how people are using public transit. 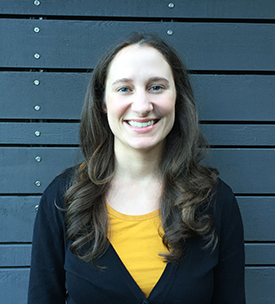 CHRISTIANSEN: Some groups, such as the League of American Bicyclists, do publish regular reports on national equity issues in bicycling. For example, in a foundational report from 2013, the League revealed that bicycle-related fatality rates for African-American and Latino riders were up to 30% higher than for white riders. And Centers for Disease Control data show that men are nearly 20% more likely to suffer fatal bicycle injuries than women. Liz Cornish of BikeMore says it’s vital to incorporate social data like these into policy to encourage wider ridership as a tool for social mobility.

CORNISH: We know that reducing commute time is the number one way that you can help families emerge from poverty. So, we can either invest in improving our transportation system, or we can make sure that every neighborhood within walking and biking distance has everything they need -- jobs, groceries, schools, healthcare.

CHRISTIANSEN: Liveable neighborhoods with bikeable streets is a dream for many young people who don’t want to own cars. But that kind of community has broad appeal, and a particular focus on bike safety could encourage more women to get out on two wheels. For Living on Earth, I’m Savannah Christiansen in Boston.


Barbara Clabots, Yes! Magazine: “Even in the most bicycle-friendly states, women are left behind”

Liz Cornish: “Bike Shops for Everyone”

The Atlantic: “Wheels of change: how the bicycle empowers women”

League of American Bicyclists: “The New Majority: Pedaling Towards Equality”