Inoculating the Mind from Climate Misinformation 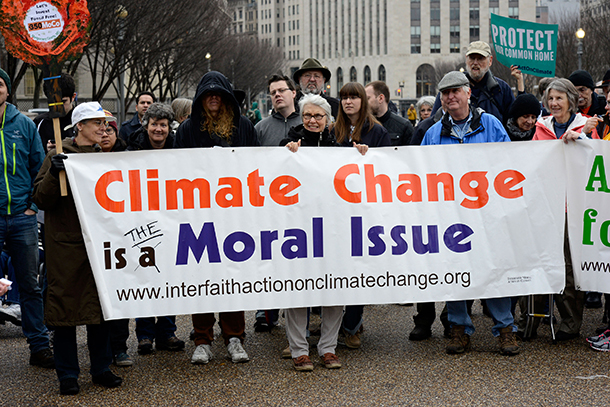 An interfaith contingent of the Global Climate March protests in Washington D.C. in 2015. According to Leiserowitz, people are most convinced of the reality of climate change when the message comes from a trusted source, like a religious organization. (Photo: Steven Melkisethian, Flickr CC BY-NC-ND 2.0)

Concerns about so-called ‘fake news’ have never been higher. Google searches for the term have quintupled since the November 2016 election, and these days it’s hard to be sure what information out there is true. According to Climate Communications scientist Anthony Leiserowitz, on the issue of climate change, there’s a lot to be skeptical about. Living on Earth’s Helen Palmer speaks with Leiserowitz about how a new study of his can help protect the public from buying into false climate information.

CURWOOD: Now, what you call “news” and what you condemn as "fake news" can depend on where you stand. The new president tweeted accusations of fake reporting more than ten times just in January, and Google searches for the term have increased a thousand-fold since October 2016. The divide in opinion on what's real and what isn't is among the starkest on hot-button issues, including climate change. Now a study in the journal Global Challenges suggests that attitudes on these issues are not immutable, even among the skeptical, and presentation of accurate information can sway opinion. Study co-author Anthony Leiserowitz is director of the Yale University Program on Climate Change Communications. Living on Earth’s Helen Palmer asked him about climate disinformation and the study.

PALMER: So, Tony Leiserowitz, why do you think it's necessary to try to inoculate the public against climate disinformation?

LEISEROWITZ: Yeah, well we've seen for many, many years that, in fact, there's been a very concerted disinformation campaign going on to try to undermine and discredit the scientific consensus on climate change. In our last national survey, we found that only 15 percent of Americans understand that it's more than 90 percent of climate scientists who are convinced that human-caused global warming is happening. There's plenty of uncertainty out there about how bad will droughts be by the year 2075 and how is precipitation going to change around the world. But about the fundamentals that this is real? There is really almost no dispute whatsoever. So we know that that's a very real misperception.

PALMER: Now you are obviously the director of the Yale University program on climate change communications, so you have actually done an experiment to try and work out if there is some way to counter this kind of disinformation. Tell me about the experiment you did. 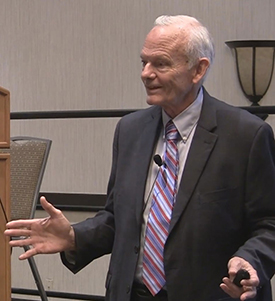 Arthur B. Robinson is a biochemist and former Republican candidate for the US House of Representatives. He runs the Oregon Institute for Science and Medicine, an organization that disputes the reality of human-caused climate change and distributed a document rejecting climate change legislation called the Oregon Petition. The petition listed over 30,000 names. (Photo: Jersnav, Wikimedia Commons CC BY-SA 4.0)

LEISEROWITZ: Sure. So, this was building on a larger body of research that we and other colleagues around the country have been doing for some years, and that is looking at what happens when you actually inform people about the scientific consensus, and what we've consistently shown is that the average American will change their own estimate of that consensus by about 20 percentage points when they're simply told that 97 percent of climate scientists are convinced that human caused global warming is happening. But what we also know is that this is not an uncontested terrain, that we don't simply get to tell people that there is a scientific consensus because there are other people and organizations out there who continue to try to question it.

So, that was the backdrop for this study where we wanted to see, so what happens when you expose people not just to the scientific consensus message, but to one of the most powerful counter messages that are out there, and then, more specifically, is it possible to inoculate people against the effect of that disinformation? And basically, it's a concept very similar to what we know of for the human body. We know when you go get your flu shot, we know that if you expose the human immune system to a limited, weakened version to the flu virus, the body learns how to recognize and to protect the body against that virus when it finally does encounter it back out in the wild. In a similar, analogous way, what we are looking at in this study is what happens when you expose people to a shortened weaker version and an explanation of why that disinformation exists, where it's coming from, and what's wrong about it. Does that protect people from the negative effects of the disinformation?

PALMER: So, what did you actually do?

LEISEROWITZ: So, we did a very large national study where we divided people essentially to six different groups. First, was the control group. So, just kind of held aside to see what happens when they don't get anything. A second group was given the consensus message and again, like we've seen in all the prior studies, their opinions changed by about 20 percentage points. A third group was exposed to one of the leading disinformation ideas, which this is "Oregon Petition". This was conducted by the Oregon Institute of Science and Medicine, which sounds impressive but is actually just a ragtag organization in Southern Oregon. They got 31,000 people to sign a petition saying that they don't believe that global warming is happening, and they claim that these people were all scientists. 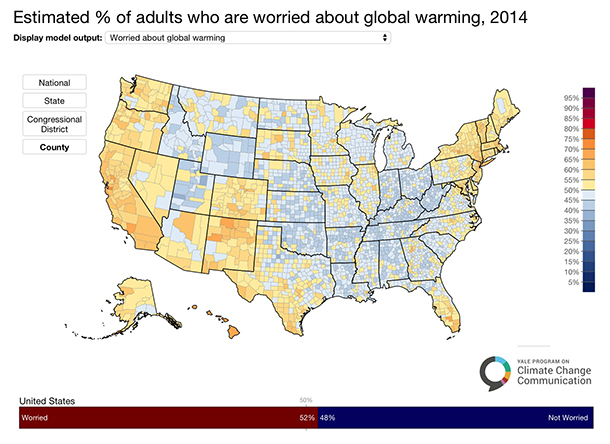 While the majority of Americans are worried about climate change, most occupy neither end of the climate concern spectrum. (Photo: Yale Program on Climate Change Communication)

Well, unfortunately when you look at who actually signed it, it included noted Nobel Laureate such as Ginger Spice of the Spice Girls, I think Adolf Hitler signed it, Mickey Mouse signed it and then, further, the people who legitimately cited almost none of them actually have a background in atmospheric or climate science, but that doesn't matter because from a communications standpoint those who've been opposed to climate action have used this exact argument over and over and over again for years. Because if you're a normal, regular person who just doesn't know very much about it, and you are told 31,000 scientists have signed a petition saying that human-caused global warming is not real, most people will go, “Gosh, that sure doesn't sound like scientific consensus.”

So, what did we find? Is that when you simply expose people to that argument, people's estimate of the consensus actually drops, just like you would expect, by about nine percentage points.

Then, in the third condition, we actually put the two messages side by side. When exposed to the fact that this consensus but also exposed to the disinformation, essentially they canceled each other out. And then came the last two conditions that were really the heart of this study. The first provided a short inoculation. People were shown the consensus message, the true message, and then told that ,while there is this consensus, there are some politically motivated groups that use misleading tactics to try to convince the public there's a lot of disagreement, and then they were exposed to the disinformation. And what we found is that about a third of the original treatment effect. People would move in a positive direction towards understanding the consensus.

The last group was then shown a longer innoculation, and that was able to protect about two-thirds of the beneficial effect of being exposed to the truth. So, it is possible to essentially inoculate the mind against disinformation which certainly has major implications for the larger issue we're all wrestling with around fake news.

PALMER: Now, big problem therefore is that these days people are getting their news from particular silos that the people who believe that indeed it's all a hoax and all a scam, they are listening to the kind of news that you are not likely to be broadcast on. So, how do you get over this problem that basically you'll be preaching to the choir?

LEISEROWITZ: Yeah, so this is really important and tough in today's world because we are increasingly fragmenting into ever finer-grained media sources, and some of them are echo chambers where they have been constructed in a way to not trust any information that comes from outside the "trusted source”. But it's also important to recognize that most people are actually not in the choir. Then comes the congregation, most of them are not actually paying that close of attention to climate change, and then there's all the people who are not in the church at all. In fact, when you break down the American public, you see that over 70 percent of Americans are in groups that we would say are neither of what we call “the alarmed”, which is fully convinced this is real and very serious or in “the dismissive”, who think this is a hoax. 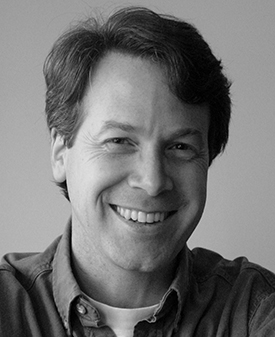 PALMER: So, how do you reach them, the mostly disengaged?

LEISEROWITZ: Yeah, so each one of these groups is different. You need to reach them through sources that they trust and in language and in concepts that matter to them. We know that, for example, many, many Americans think that climate change, if it's real, is distant. Distant in time, meaning the impacts won't be felt for a generation or more, or distant in space. This is about polar bears or maybe some developing countries but not the United States, not my state, not my city, or any of the people and places I care about. That's just fundamentally also a big misunderstanding is that, in fact, climate change is here and now. The impacts can be seen and felt all over the country as we speak here today, and likewise, many people don't recognize that the solutions to climate change are also here and now. So, bringing it down literally to earth and recognizing that this is something in the here and now, really helps to engage those other groups that say, hey, this is far away in time and space.

LEISEROWITZ: Not particularly. Already we’re seeing a number of things that appear to be frankly at odds with the truth. As Americans increasing fragment into these kinds of echo chambers, that makes it incredibly hard to have rational conversations about how we move forward because now we're operating with completely different sets of "facts".

CURWOOD: Anthony Leiserowitz directs the Yale University Program on Climate Change Communications. He discussed his study “How to Inoculate the Public Against Misinformation on Climate Change” with Living on Earth’s Helen Palmer.


The study: “Inoculating the Public against Misinformation about Climate Change”