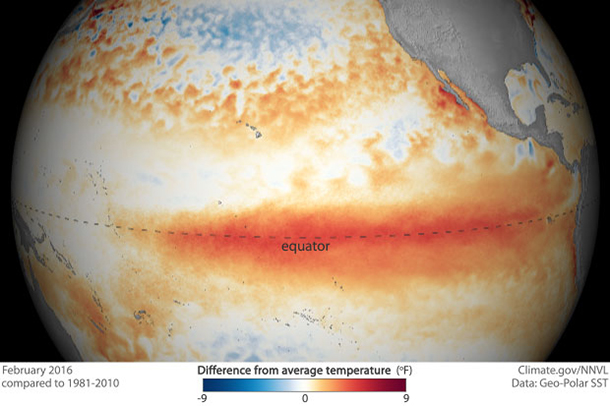 As the 2015-2016 El Niño episode was waning, sea surface temperatures in February 2016 remained warmer than average. A year later, warm sea temperatures suggest the Pacific may be gearing up for a repeat of the weather pattern. (Photo: Climate.gov/NNVL, Data: Geo-Polar SST)

Dramatic winter flooding in California followed by unprecedented rains that buried Peru in feet of mud signal that El Niño may be returning. This just months after a powerful iteration of the weather pattern ended its 2015-2016 rampage through global weather systems, though El Niños are usually spaced years apart. National Center for Atmospheric Research Senior Scientist Kevin Trenberth and host Steve Curwood look at this latest weather surprise on an ever-warming planet.

CURWOOD: Unprecedented flooding has swept through Peru in recent days, leaving parts of its capital, Lima, buried under feet of mud. Heavy rain along the west coast of South America is often due to El Niño, the presence of warmer than usual water off the coast there that often has profound effects on weather around the globe. Starting in 2015, a powerful El Niño pattern promoted extreme rains and drought, but climate experts are wondering if we could be facing another one in 2017, even though there’s typically three to seven years between the phenomena.

Well, for some explanation of what might be going on, we turn to climate expert Kevin Trenberth, senior scientist at the National Center for Atmospheric Research. Welcome back to Living on Earth, Kevin.

TRENBERTH: Yes, it's good to see you again.

CURWOOD: For those folks who don't regularly listen to the program or who may be new to this topic, where does the term El Niño come from?

TRENBERTH: Well, “El Niño” is a term that grew up off of the coast of South America, and it referred to originally a warm current that came down from the north along the coast, and it came around Christmas time, and that's where the term Niño came from. It referred to El Niño the Christ child, but then every few years or so it turned out this current was much warmer than normal, and the term El Niño then came to take on this name for the anomalous conditions, and so then we refer to this as an “El Niño event.” In more recent times it's been recognized that this coastal event is very much related in general to a basin-wide phenomenon, and that's the one which is important for many other parts of the world as well. 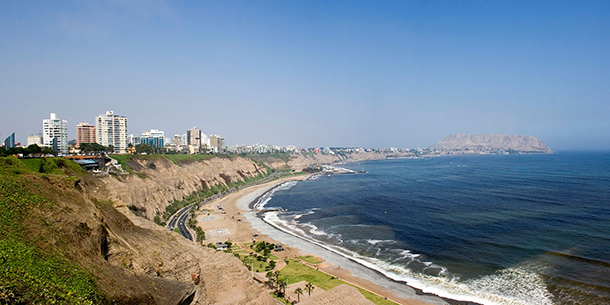 The term “El Niño” originated among communities like Lima, Peru that lie along the Pacific coast of South America. It described a surge of warm water from the north that typically coincided with Christmas, the time of the Christ Child—‘El Niño' in the Spanish language. (Photo: Fernando Stankuns, Flickr CC BY-NC-SA 2.0)

CURWOOD: Why does the El Niño phenomenon have such an effect on planet conditions everywhere around the planet?

TRENBERTH: It relates to the sea surface temperatures and the fact that it occurs in the tropics, and right now there’s sort of the coastal El Niño van off the coast of Peru. The temperatures there are more than three degrees Celsius, over five degrees Fahrenheit, above normal, and as a result that becomes a center of action. That's where all of the air tends to move towards the heavy rainfalls that occur there. In turn, those heavy rainfalls change the heating patterns in the atmosphere, and that acts a little bit like a rock in a stream, and it sets up ripples downstream, and so it affects the jet stream of North America and other places around the world, and so it changes the weather patterns.

CURWOOD: Now, recently we've seen these horrific floods in Peru that are related to, as you say, a coastal El Niño. How unusual are these floods and coming right on the heels of the California flooding?

TRENBERTH: Yes, it is not uncommon, actually, to have some sort of a mirror image across the equator. So, we have flooding in California and we have flooding in coastal South America. You know, last year, we had flooding in the Missouri at the same time there was major flooding in Bolivia. And this time, as far as I can tell, some of the flooding has been really devastating. I mean, the magnitude of the sea surface temperatures anomalies are as high as they've ever been.

CURWOOD: What does this phenomena, what do these floods tell us about the likelihood of a global El Niño emerging again? It seems like we just one. 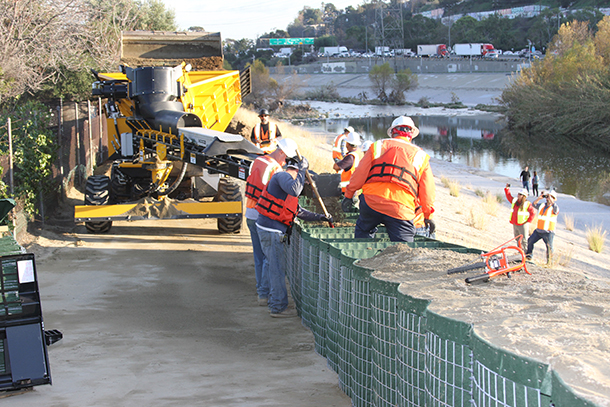 TRENBERTH: Yes, it's very interesting from that standpoint because we've had this major El Niño event from 2015 through 2016, and it died away about a year ago, and to have another one developing along the coast of South America so soon is quite unusual, and so it's a big question as to whether this will now expand into the central Pacific especially since it's coming so closely on the heels of the previous event.

CURWOOD: It seems that for years there was some regularity to these cycles, El Niño, and then La Niña is the opposite, right? How much of that has changed, do you think?

TRENBERTH: Yes, so, conditions are very seldom average in the tropics. It's really always going from El Niño to La Niña, which is the cool phase in the tropical Pacific, and then back again, and the average period is around four years, but we generally say that it say three to seven years because it's not a complete rhythm. So, having another one almost a year after the previous one is fairly unusual but not unprecedented.

CURWOOD: So, what is the relationship, if any, between climate change, climate disruption and the El Niño phenomenon?

TRENBERTH: This is a really good question. We're not sure exactly how the El Niño phenomenon and will change or whether it will change much in association with climate change aspects. What is clear, though, is that when it rains, it rains harder. There is a greater risk of floods, and at the same time other parts of the world are suffering from droughts, and so both the droughts and the floods become more extreme in association with the global warming aspects. 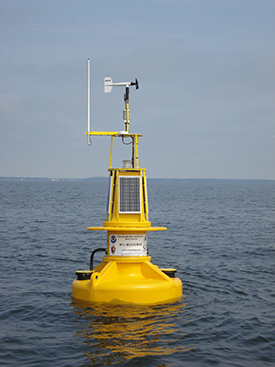 The National Oceanic and Atmospheric Administration (NOAA) installs buoys like this one in bodies of water around the world to collect climate data. The organization’s shrinking budget has prevented necessary repairs to buoys monitoring El Niño conditions in the Pacific Ocean. (Photo: NOAA, Wikimedia Commons CC BY 2.0)

CURWOOD: So, we've had an unusual year. California is just emerging from a lot of flooding. Chile and Peru are suffering from flooding right now, and with the question of a coastal El Niño...If a full El Niño starts to develop, what might that say to us about global warming, climate disruption?

TRENBERTH: Well, this is a good question as to exactly what will happen. It would be surprising if there was a substantial El Niño that grows out of this because we’ve just had one, and that has actually taken some heat out of the tropical Pacific Ocean, and in that sense, there is less fuel available for the next one. But nevertheless, these El Niño events can be manifested in somewhat different ways so that there's no really good analogs that we can go by, and one of the tasks we have as a research community is to try to build better climate models that we can simulate these and make better predictions into the future.

CURWOOD: So, we called you up because this is one of the years that it's, well, kind of “strap yourself in”, in terms of weather phenomena in all kinds of ways. We've seen a rapidly warming Arctic, these devastating droughts and, of course, the level of CO2 keeps going up. How much climate disruption are we starting to see that we could attribute to our human activity?

TRENBERTH: Well, there's a lot that's been going on and, of course, a lot went on in the last couple of years in association with the El Niño event. Last year, there was major flooding in and around the Houston area around April, and then there were these very unusual, so called “thousand-year flooding events” in Louisiana around August, and then the unprecedented flooding that occurred in association with Hurricane Matthew especially in the Carolinas in October. Other parts of the world have experienced devastating droughts in South Africa and in other parts of Africa, in Indonesia and Borneo, and many wildfires associated with the drought conditions. And so there's no doubt whatsoever that global warming is continuing, and that's largely caused by human activities and it's already having consequences, and those consequences could easily be in the neighborhood of the tens of billions of dollars a year. 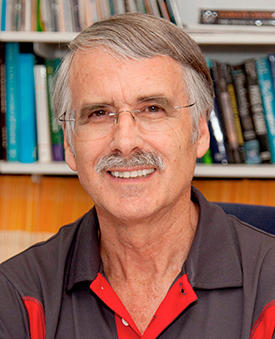 CURWOOD: Now, the National Center for Atmospheric Research there in Boulder has gotten close to two thirds of its budget from the National Science Foundation, and most of the rest comes from other federal agencies, the Federal Aviation Administration, NASA, and NOAA, the National Oceanic and Atmospheric Administration. How is morale there in the present political climate where there's a lot of talk about cutting, maybe even eliminating funding for you guys?

TRENBERTH: Yes, well climate is certainly under attack. That's true in the so-called skinny budget that's been released by the administration, but we're very dependent upon DOE and NOAA and NASA and other funds, and so there is great concern.

CURWOOD: And what kind of things might we lose in science if this funding is cut?

TRENBERTH: Well, there is a good example here, in fact. NOAA funding has been cut in the realm of climate since about 2012, and this had consequences because the El Niño monitoring system in the tropical Pacific decayed. There’s a number buoys that are deployed throughout the Pacific - something like 79 or something like that - and they have to be serviced about once a year by oceanographic ships, and they decayed in 2014, and then this big El Niño came along, and we weren't able to track exactly what was going on as well as we would like. Many things which are not directly related to climate change even, as long as they are related to climate, are under threat now.

CURWOOD: Kevin Trenberth is a distinguished Senior Scientist at the National Center for Atmospheric Research in Boulder, Colorado. Thank you so much for taking the time with us today.

TRENBERTH: Oh, you're most welcome.