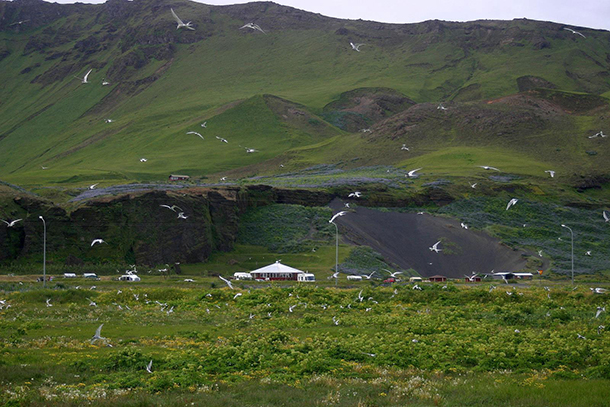 In this week’s note on emerging science, Living on Earth’s Don Lyman uncovers new research that links ammonia from seabird guano to atmospheric cooling in the Arctic.

CURWOOD: It’s Living on Earth, I’m Steve Curwood. Just ahead, chemicals and a huge drop in human fertility. But first this cool note on emerging science from Don Lyman.

LYMAN: For millions of years, seabirds breeding on cliffs and islands deposited guano, creating a valuable source of fertilizer for farmers. And now Canadian scientists have discovered that seabird poop also helps to cool the Arctic. In a recently published journal article, researchers from Dalhousie University and Alberta Environment and Parks report that the gas ammonia is surprisingly abundant in the Arctic air. They identify the source as guano produced by tens of millions of birds that breed in the Arctic each summer.

Bacteria that feed on the birds’ feces release about 40,000 metric tons of ammonia annually, the scientists reported. When the ammonia rises into the atmosphere it reacts with sulfuric acid and water to create tiny particles that form the nucleus for increased numbers of small cloud droplets.

Since clouds made up of smaller droplets have more surface area than clouds that consist of fewer larger droplets, the researchers say the clouds of smaller droplets reflect more sunlight back into space. This causes one-half to one watt per square meter of cooling during the Arctic summer, helping to offset some of the average 1.6 watts of warming per square meter that human-produced carbon dioxide causes.

The scientists admit that this bird poop produces only a modest cooling effect, given that the natural greenhouse processes that help keep the earth habitable cause as much as 150 watts of atmospheric warming per square meter. But they argue that understanding the effects might help future researchers better predict how the Arctic will fare as climate change progresses.

Audubon: “Sitting Ducks: Why Millions of Arctic Seabirds Are in Danger”