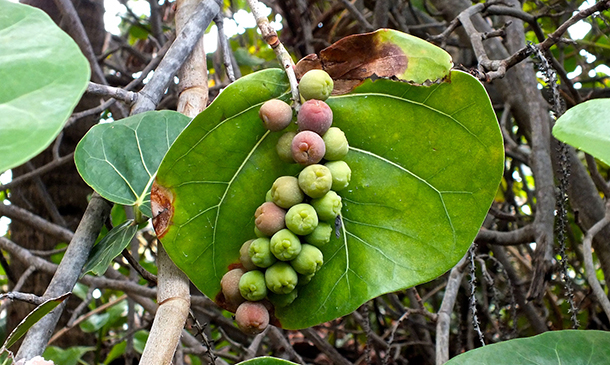 Sea grapes, whose scientific name is Coccoloba uvifera, are native to coastal beaches in the Caribbean and can be fermented into sea grape wine. (Photo: Cayobo, Flickr CC BY-SA 2.0)

We remember the renowned writer Sir Derek Walcott, who died in March. The Saint Lucian poet focused on the sea and the Caribbean ecology, and in 1992, won the Nobel Prize in Literature. In this recording, Sir Derek reads his poem "Sea Grapes."

CURWOOD: On March 17, one of the most gifted and renowned poets of the last century departed his native St Lucia to sing eternally among the bards on Mount Olympus. Sir Derek Walcott celebrated his Caribbean heritage and ecology, railed against its colonial history, paid constant homage to Homer, and won a McArthur genius grant and the Nobel prize. Here is Derek Walcott himself with “Sea Grapes." 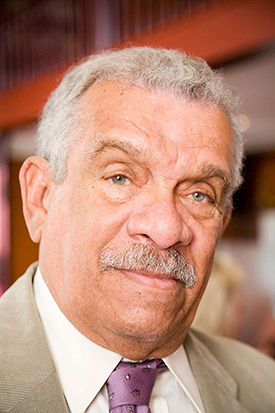 WALCOTT: That sail which leans on light,
tired of islands,
a schooner beating up the Caribbean

for home, could be Odysseus,
home-bound on the Aegean;
that father and husband's

longing, under gnarled sour grapes, is
like the adulterer hearing Nausicaa's name
in every gull's outcry.

This brings nobody peace. The ancient war
between obsession and responsibility
will never finish and has been the same

for the sea-wanderer or the one on shore
now wriggling on his sandals to walk home,
since Troy sighed its last flame,

and the blind giant's boulder heaved the trough
from whose groundswell the great hexameters come
to the conclusions of exhausted surf.

The classics can console. But not enough.


The text of “Sea Grapes”

NYTimes: “Derek Walcott, Poet and Nobel Laureate of the Caribbean, Dies at 87”