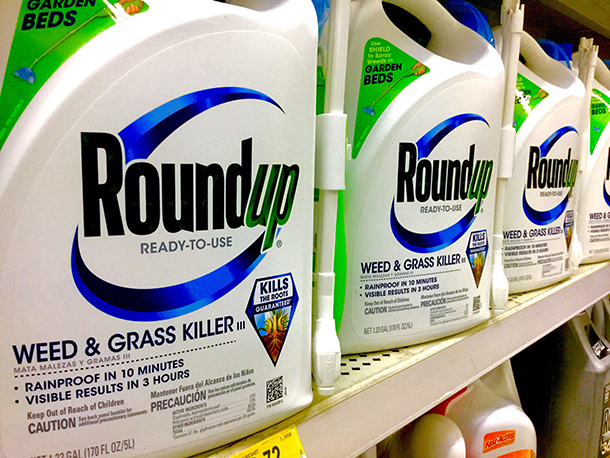 California’s Office of Environmental Health Hazard Assessment recently determined that glyphosate—a chemical in Roundup—will be added to the list of chemicals to be labeled as being suspected to cause cancer. Monsanto says that Roundup is perfectly safe. (Photo: Mike Mozart, Flickr CC BY 2.0)

California recently added glyphosate — a chemical found in the herbicide Roundup® - to its list of chemicals to be labeled as being suspected of causing cancer. Monsanto, makers of Roundup®, maintains that glyphosate has a long history of safe use but faces dozens of lawsuits from gardeners and farm-workers who claim the weed killer caused their non-Hodgkin’s lymphoma, and documents unsealed as part of a California suit may cast doubt on some of chemical giant’s research. Environmental lawyer Robert F. Kennedy Jr., part of the plaintiffs’ litigation team, discusses the issues with host Steve Curwood.

CURWOOD: It’s Living on Earth, I’m Steve Curwood. A judge in California recently ruled that the state can require Monsanto to label its popular weed-killer Roundup as a possible carcinogen, even though the firm contends that the key ingredient, glyphosate “has a long history of safe use”.

The move comes as the giant seed and pesticide conglomerate faces dozens of lawsuits from plaintiffs who allege the company misled the public about the risks of Roundup and thus compromised the health of workers. The plaintiffs claim that exposure to Roundup® caused them to develop non-Hodgkin’s lymphoma.

Recently unsealed court documents suggest that studies attributed to academics were actually ghostwritten by Monsanto employees, and that U.S. regulators based their determination that glyphosate is not a cause of cancer on those studies.

Among the lawyers suing Monsanto is environmental legal activist, Robert Kennedy, Jr., who incidentally suffers from spasmodic dysphonia that affects his voice. Welcome to Living on Earth, Mr. Kennedy.

KENNEDY: Thanks for having me.

CURWOOD: So, who are the people who are bringing this lawsuit against Monsanto? How were they interacting with Roundup®?

KENNEDY: Among the law firms that are part of our coalition, there are about 3,000 clients who have already signed up. And these are people who are farmers. Many of them are gardeners, are people who had backyard gardens and either have been directly impacted -- In other words, they have of non-Hodgkin's lymphoma -- or they have a relative who has died from non-Hodgkin's lymphoma.

CURWOOD: Now, in this particular case, Monsanto and the EPA both say that the main ingredient in Roundup®, glyphosate, is safe, but then we had the World Health Organization calling it a probable carcinogen to humans. Bobby, from what you can tell, what is there in the way of a scientific consensus on this issue of glyphosate and human health. 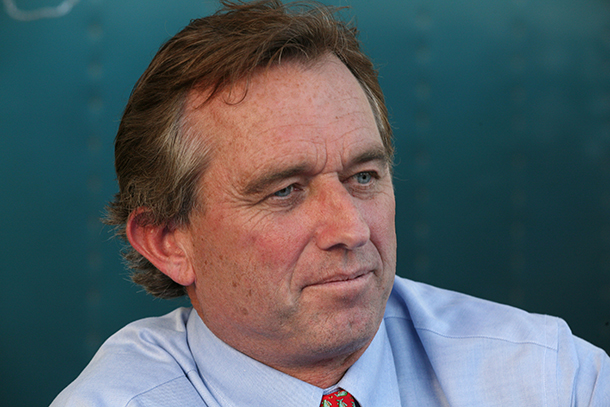 KENNEDY: There's two issues. One is that glyphosate alone is less toxic, we know, and glyphosate in the formulation of Roundup®. There are surfactants and adjuvants in Roundup® and particularly a class of surficants known as tallowamines. That makes glyphosate far more toxic than it is alone, in fact, there's implications that it might be 10,000 times as toxic when combined with the tallowamines. The reason that the tallowamines make it more toxic is that they allow the glyphosate to penetrate human skin on contact in very, very high concentrations.

We also have studies by the premier, gold standard cancer research organization on Earth, which is the International Association for Cancer Research or IARC, which is an organization that is funded by 16 industrialized countries, and most nations, most European countries recognize, and countries all over the world, that nobody really had the resources to measure all of these chemicals that we're now swimming around in for carcinogenicity, and we needed to have one centrally funded and adequately, abundantly funded organization and use the highest scientific standards and employ the best scientists on Earth, and that organization has determined that glyphosate is a probable carcinogen.

CURWOOD: Now, Roundup® is used on more than 100 crops, and is registered in the 130 countries, but EPA has determined that there is little risk for most Americans in the quantities they say they are usually exposed to. How accurate is that?

KENNEDY: It's not accurate, and unfortunately what the documents that have been recently released by Judge Chhabria show is that there was a history of collusion between the EPA pesticide division which was helping Monsanto cover up the dangers of glyphosate and Roundup® as well. The head of the pesticide branch was a guy named Jess Rowland, who had this very disturbing relationship with Monsanto in which there are emails that show him going to bat for Monsanto. At one point, he tells...
A conversation is described in the email in which Jess Rowland pledges to derail an investigation of glyphosate and Roundup by the HHS. We have permission to depose Jess Rowland. We've also deposed David Hayden, who is the Monsanto executive who was coordinating the cover up with the EPA. 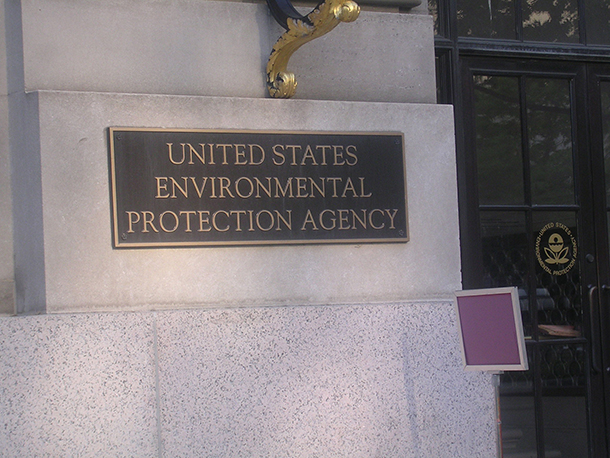 Judge Vince Chhabria, of the U.S. District Court for the Northern District of California, unsealed documents that allege collusion between EPA personnel and Monsanto. (Photo: Mccready, Flickr CC BY 2.0)

In answer to your question about whether EPA science is trustworthy, it's not. And in fact, EPA had a long history of … That particular division is kind of a poster child for what we call “agency capture phenomenon,” where the regulatory agency becomes captured by the industry that it's supposed to regulate.

CURWOOD: And what about then our regulators? What sanctions if any are you seeking against the EPA for approving Roundup®?

KENNEDY: Well, the EPA should be sanctioned for this. In particular, what's very strange about EPA is that, instead of coming clean, what EPA has been trying to do is to block us from deposing Jess Rowland and to cover up the documents in its possession. It is particularly disturbing since recently there's been a number of other developments since the Trump administration came into office.

Scott Pruitt, formerly the Attorney General of Oklahoma, is one of the biggest recipients of funding for Monsanto. He is a creature…His political career has been a creature of the agricultural chemical industry and factory farming industries. He really was hand-selected by those industries to become Attorney General of Oklahoma in order to derail a series of lawsuits that his predecessor had brought against Big Ag. And he's recently expressed an unwillingness to look further into glyphosate.

In addition to that, a number of independent testers have found that America's cereals, breakfast cereals fed to children are loaded with glyphosate, and the USDA in Texas had made a settlement of the lawsuit and the settlement required USDA to look into, to conduct an investigation of glyphosate in cereals, and the USDA has just announced that it is going to drop that investigation. That's disturbing because we're all getting these big exposures to glyphosate that may be damaging to our kids who are particularly vulnerable, and we have a government now that is…seems anxious to collude with Monsanto in this long collaboration and seal the dangers of glyphosate to human health. 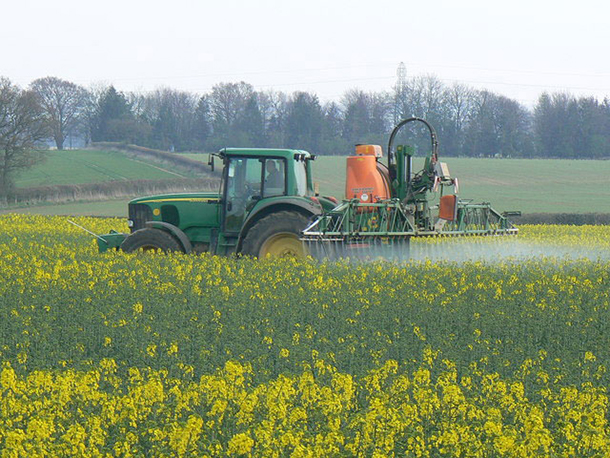 Many of the plaintiffs are farmers and people with backyard gardens who used Roundup® to control the weeds around their crops, or whose now-deceased family members did so. Roundup® is used on more than 100 crops and registered in 130 countries. (Photo: Brian Robert Marshall, Wikimedia Commons CC BY-SA 2.0)

CURWOOD: Robert F. Kennedy Jr is an environmental lawyer and activist. He joined us from Washington DC. Bobby, thanks so much for taking the time today.

KENNEDY: Thanks so much for having me.

CURWOOD: We asked Monsanto for their response to these allegations. Charla Marie Lord, Monsanto’s Senior Media Communications Manager, sent an email which is posted in full at our website, LOE.org.

It reads in part:

“First, the allegations of 'ghostwriting' that you mention have been extensively addressed and refuted.
The email concludes “no regulatory body in the world considers glyphosate to be a carcinogen.
Plucking a single email out of 10 million pages doesn’t change this fact."

The EPA declined to comment on the emails of Jess Rowland that have been entered into evidence.

Full Monsanto Statement, provided by Charla Lord of Monsanto's Corporate Engagement office (discover.monsanto.com):
"These allegations have been extensively addressed and refuted. The Monsanto scientist who wrote the email in question has testified under oath regarding the paper, and New York State Medical College has conducted its own investigation and dismissed the claims. We have been in the record in many outlets refuting these false claims.
"The conclusion of paper in question, “Safety Evaluation and Risk Assessment of the Herbicide Roundup and Its Active Ingredient, Glyphosate, for Humans,” by Gary M. Williams, Robert Kroes and Ian C. Munro in Regulatory Toxicology & Pharmacology (2000), is consistent with the findings of regulatory authorities around the world, a branch of the World Health Organization that analyses pesticide residues, and one of the largest databases ever compiled on an agricultural product. In fact, the same week the plaintiffs’ attorneys released these documents, the European Chemicals Agency concluded yet another review on glyphosate and concluded that it is not a carcinogen.
"To be clear: No regulatory body in the world considers glyphosate to be a carcinogen. The allegation that glyphosate can cause cancer in humans is inconsistent with decades of comprehensive safety reviews by the leading regulatory authorities around the world. The plaintiffs have submitted isolated documents that are taken out of context. Plucking a single email out of 10 million pages doesn’t change this fact."

OEHHA: “Glyphosate to be Listed under Proposition 65 as Known to the State to Cause Cancer”