Marching for the Earth and Science 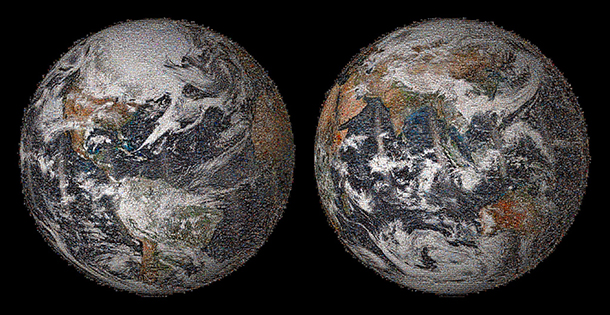 For Earth Day 2014, NASA pasted together a global “selfie” of the earth comprised of photos that people from around the world had posted on Earth Day. (Photo: NASA, Wikimedia Commons public domain)

As Earth Day celebrates its 47th year on April 22 a billion people gather around the globe to celebrate our green planet. Thousands also meet on the National Mall to defend science as well with teach-ins on climate change and scientific literacy. Host Steve Curwood discusses the elements that galvanized this planetary celebration with Earth Day Network President Kathleen Rogers and why this year’s theme is so vital.

[MUSIC: The Beatles "Let it Be” on Let It Be, written by Paul McCartney, Apple Records]

CURWOOD: On April 22, 1970, the Beatles "Let It Be" was number one on the record charts as some 20 million Americans gathered for the very first Earth Day. Cities from New York to Los Angeles were choking in smog, and Cleveland’s downtown river had caught fire several times, the pictures getting national notoriety in Time magazine, along with the first color photos of Earth taken from space. So, people marched to let nature be, and by the end of the year Republican President Richard Nixon had created the Environmental Protection Agency and signed the Clean Air Act.

Today, some 47 years later, thousands of concerned citizens celebrate Earth Day by taking to the streets, coordinating this year with a March for Science. Kathleen Rogers is the president of Earth Day Network, and she joins us now.

Welcome to Living on Earth.

ROGERS: Thank you very much, I’m happy to be part of the show.

ROGERS: It's doing wonderfully. We have over a billion people participating worldwide. We are going like gangbusters in China and India. It is incredibly rewarding to see ordinary citizens from the developing world turning out like Americans did in 1970. We plant trees, we clean up garbage, we march, we protest, we challenge our government. I don't know where the world would be without Earth Day.

CURWOOD: Tell me about the theme of Earth Day this year. Why it important?

ROGERS: Our theme this year is global climate, environment and science literacy. We have begun to see, partially based on the Paris climate Agreement that we need to create an educated workforce if we're going to build a green economy. If we're going to build a consumer base for green products, if we're going to educate scientists for the future, we need to educate people about not just the facts of the environment but also helping them internalize the values and then put it in the context of jobs and growth. In United States, we literally have 50 different environmental literacy plans for each one of our states. Our goal is to create a unified approach to environment and climate science, promoting not just the information and not just the values but also the potential for America to lead in the green economy. 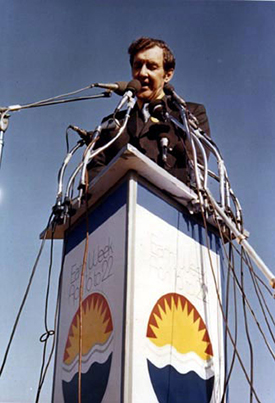 Senator Edmund Muskie, author of the Clean Air Act of 1970, addressed a crowd in Philadelphia on the first Earth Day in that same year. (Photo: Peter 54321, Wikimedia Commons CC BY-SA 3.0)

CURWOOD: So, April 22 in the United States this year is also the date of the March for Science. Who did you expect was going to show up at the Saturday event on the National Mall?

ROGERS: Well, we had originally just been focused on creating teach-ins on the National Mall, but when we partnered with the young scientists from March for Science, we began to see great interest not just from the scientists but also many demographics. So, we have faith-based groups that are attending, environmental groups. There’s just an extraordinary array of community groups also joining the March for Science. So, I would say it is truly representative of the US population, and, while perhaps won't dominated by white lab coats, we do expect many, many scientists to be on the Mall.

CURWOOD: Why is it important for scientists to stand up, to participate in this demonstration in the face of political opposition to their work?

ROGERS: You know, their integrity has been brought into question, and scientists spend years and years in labs away from public view, and now they're coming out of their labs, out of their federal agencies, and they're going to march because for that reason and that reason alone. I think more than anything they believe that there is a set of facts, there is such a thing as truth, and there is such a thing as integrity, and all of those things have been questioned and that's why they're marching.

CURWOOD: Now, what about concerns? Some criticize this as saying that science is being politicized, giving it a left-wing tilt. How do you respond to criticism that the scientists are letting themselves get caught up in politicization? 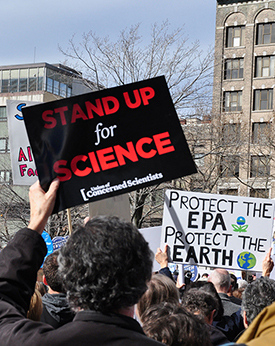 Demonstrators at the Boston “Stand Up for Science” Rally on February 19, 2017 waved a variety of signs signaling their stance against what they saw as President Trump’s anti-science agenda. (Photo: AnubisAbyss, Flickr CC BY-NC-ND 2.0)

ROGERS: Well, I mean, all human beings are political. Scientists vote just like you and I do. They have their own views of the world, and so asking them to remain away from view, asking them not to take a position on any subject including their own integrity I think is asking a bit too much. They have been inundated with the news about the alternative view of the universe, alternative facts, and at a certain point they needed to march. They needed to come out into the sunlight and talk about their work and talk about how important it is and how there are a set of facts. There are values. There is scientific truth, and all of those things don't necessarily mean or have anything to do with politicization of anything. Politics is very different, partisanship is very different, and the scientists aren't there to be either one of those things. They're there to defend themselves, defend their jobs, defend their research, and be part of a movement that I think is taking place nationwide, and that is there are critical things on Earth - those sets of values that Americans believe deeply in - and they cannot be questioned as part of the fabric, part of the DNA of America. And they want to share in those values and they want to share in that process.

CURWOOD: So, April 22, Earth Day, March for Science. What happens next?

ROGERS: The March for Science begins a weeklong of climate education worldwide. We are also the bookend. The People's Climate March is the following Saturday on the 29th, and so we are part of a process, I think, of bringing people together to the streets, coffee houses, online, in a conversation about the things that really matter, and I think you're seeing a larger more committed constituency for becoming engaged in public policy. Not just scientists, but the environmental community, the food and drug scientists of the world. Everybody seems to want to be engaged in the conversation, so it's a beginning of a long process, but it's fun that the Earth Day Network is kicking off this weeklong set of activities around climate education and science in general. 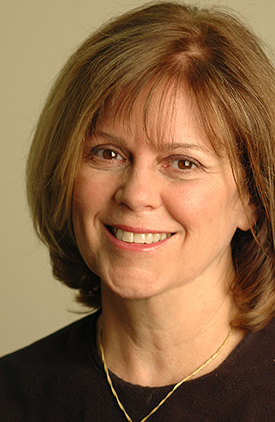 CURWOOD: Now, historically the environmental movement in the US has been largely a white and middle-class movement. And, Kathleen, I believe we last spoke in 2008.

CURWOOD: And Earth Day Network was focusing its efforts on reaching a more diverse audience What do you have to report in terms of progress on that front?

ROGERS: Well, I think that's the question. Membership of the environmental community continues to be less diverse than we hoped it would be, but there are environmental groups, there's social justice and environmental justice groups springing up all over the country. So, from that perspective we're seeing a huge movement at the local level, which is where we think the action should be because whether you're siting a power plant or you're siting a transmission lines or you're opening a coal mine or whatever else you're doing, we need local constituents who are fully engaged and who represent that, not just a single demographic, but all of America. So, while it's been slow, the environmental community continues to invest, not just in itself to build a diverse movement, but also in local communities and certainly on our stage we're going to be bringing together a large group of diverse scientists from around the world and community groups that can speak to that issue.

CURWOOD: Kathleen Rogers is the President of Earth Day Network. Thanks so much, Kathleen.

ROGERS: Thank you for having me.