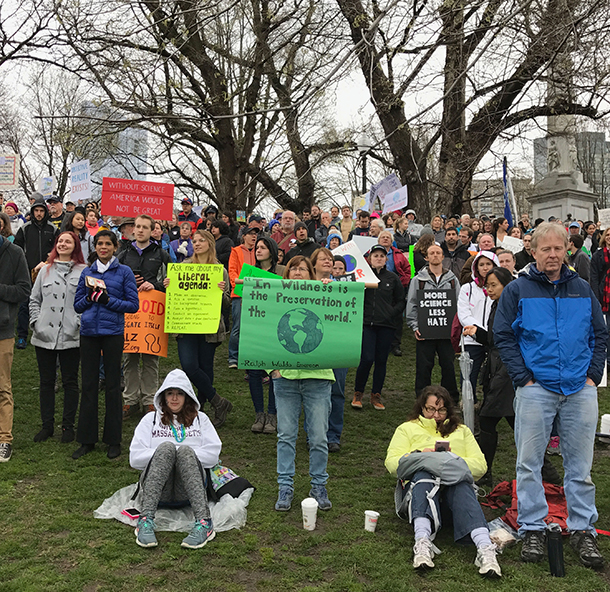 Organizers estimated that 50,000 people turned out for the Boston March for Science (Photo: Jenni Doering)

Hundreds of thousands worldwide turned out for the more than 600 Marches for Science on Earth Day. The signs, chants, and songs at these events expressed frustration over proposed US federal funding cuts for research, and celebrated the fruits of science. Living on Earth's Jenni Doering reports from the Boston March for Science.

CURWOOD: It’s Living on Earth, I’m Steve Curwood. On Earth Day, April 22, hundreds of thousands turned out for as many as 600 marches worldwide to speak out for the sciences. And many of those who participated in the US were protesting what they see as the “anti-science” agenda of the Trump administration. With about 50 colleges and universities in the greater Boston area as well as a bevy of high-tech medical and bioengineering firms, the region is a hub of scientific research and tech companies. So as thousands gathered in Washington, New York, Los Angeles, and San Franscisco, thousands more gathered on Boston Common despite a cold and drizzly day. They carried home-made and often witty signs that touched on climate change, research funding, and how much our society owes to science. Living on Earth’s Jenni Doering was there and has our story.

DOERING: In case you didn’t quite catch that...

DOERING: Petra, who’s about 4, shouted into a megaphone on Boston Common, beside her mother Katie. 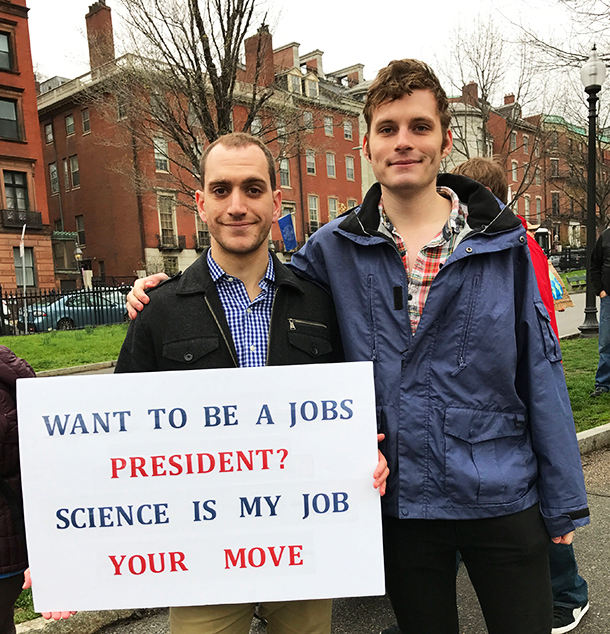 Nathan Smith, left, was there with his cousin, Joseph Marcus. (Photo: Jenni Doering)

KATIE: I am an infectious disease physician and I take care of HIV patients. So my sign says, “Got polio, smallpox, measles, diphtheria, tetanus, plague, ebola, yellow fever? – No? You’re welcome, Science.”

DOERING: Some 50,000 people braved a persistent cold rain at Boston’s March for Science. Some wore white lab coats; many carried clever signs like “Only primatologists should monkey around with science!”, and in a proud display of nerd culture, a few spelled out words using symbols from the Periodic Table. On this 47th Earth Day, former EPA Administrator Gina McCarthy kicked off the speeches at the main stage.

MCCARTHY: My poor EPA! I love you! [CHEERS] Every aspect of EPA’s work seems to be under attack, including the expertise of that wonderful career staff who have worked so hard to successfully deliver on our promise of clean air, and clean water and land. Career staff who have helped us take strong, sure steps to combat climate change. Staff who are now facing a presidential budget that seeks to cut the agency staff by a third and its science in half. We cannot tolerate that! [BOOS] 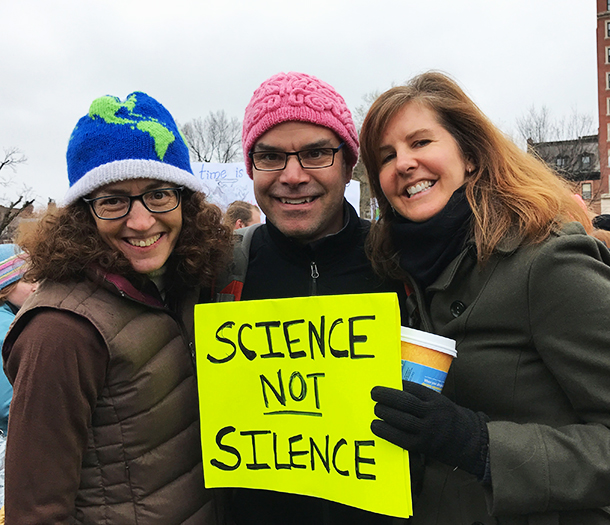 Immunologist Seth Brooks, center, was accompanied by Kelly Kieffer (left) -- who knitted the earth and brain hats -- and Stephanie Klees, both of whom are physicians. (Photo: Jenni Doering)

DOERING: Physicians, bioengineers, tech entrepreneurs, even a rocket scientist took the stage. About half the speakers were racial minorities, but the crowd was overwhelmingly white. And although the organizers aimed to avoid being partisan, walking through the crowd there were signs denouncing President Trump’s proposals to cut research funding everywhere, from the NIH to the EPA. “Resist the anti-science agenda;” read one, and, “Want to be a jobs president? Science is my job. Your move.” Immunology professor Seth Brooks, under a pink beanie knitted to look like a brain, spoke about the economic costs of gutting research.

SETH: From a basic economic standpoint, science funding from the federal government generates somewhere between 2 and 8 dollars of economic activity for every dollar that’s spent. And that return on investment is huge. 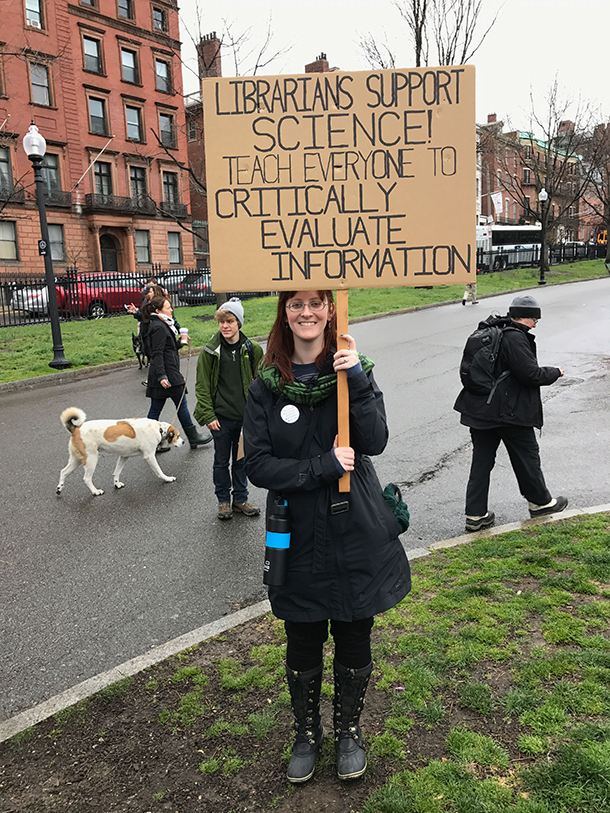 At least 30 librarians came to the march to draw attention to the importance of information literacy, including Margaret Rosequist, above. (Photo: Jenni Doering)

DOERING: A group of some 30 librarians, shocked by the proposal to eliminate all federal funding for the Institute of Museums and Library Services, marched to the Common from Boston Public Library.

LIBRARIAN: As a librarian I’ve been thinking a lot about information literacy, which is the skill of critically evaluating information. And librarians have been very concerned with things like government sources no longer being as reliable as we might hope that they would be.

DOERING: Another Seth – in his Red Sox hat - said he’s not a scientist, but he had to take a stand.

SETH: I’m here in particular reaction to the degradation of climate change and to appointing people who fundamentally don’t believe in it to government; and the general war on intellectualism and sort of warping of science into a political tool.

AVERY: That’s all not good stuff.

DOERING: His son Avery, a freckled redhead who couldn’t have been older than ten, also had a sign.

AVERY: Um, it says: ‘The good thing about science is that it’s true whether or not you believe in it,’ which is a quote from Neil deGrasse Tyson.

DOERING: One might guess that Neil deGrasse Tyson, the astrophysicist and science populist, would have been glad to see the science-based kids’ activities at the event. 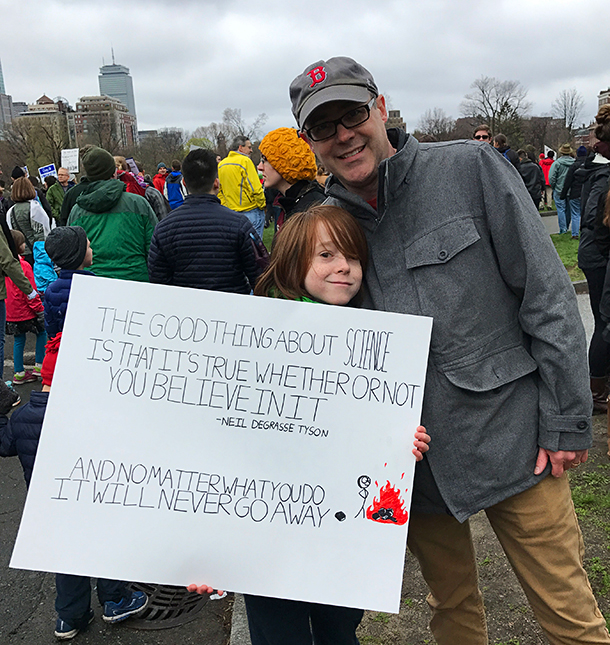 ACTIVITY GUY: Take this grape. You’re gonna get one piece of paper, and you can use up to 10 toothpicks, and you’re gonna work on a solution to protect the grape from getting smushed by the grape crusher.

DOERING: The crusher? A simple wood contraption – like a hammer with eyes painted on.

ACTIVITY GUY: This guy, his name is Julius Squeezer. What’s gonna happen is, we’re gonna drop it on one, two, three – [BAM!] – we’re gonna try and smush your grape.

DOERING: ... but science has failed to engineer diversity within its ranks. Chiderah Okoye is the President of the Boston chapter of the National Society of Black Engineers.

OKOYE: I want us to start envisioning an internal threat we have in science and technology – and that’s one that’s marked by stark underrepresentation of select ethnic groups. [CHEERING]

DOERING: Speakers shared stories of the ethnic prejudice some scientists face. Physics and engineering teacher Graciela Mohamedi recalled when, while completing her postdoc at Boston University, she stepped outside her lab to call her Spanish-speaking grandmother. An older man came up to her.

MOHAMEDI: And he told me to get off the phone, to go clean the bathroom, because it hadn’t been done properly. [CROWD BOOS] That man saw my dark hair. He saw my dark eyes and he saw my olive skin. He heard my mother’s language on my lips and in that moment he decided that I could not be a scientist. [BOOS] 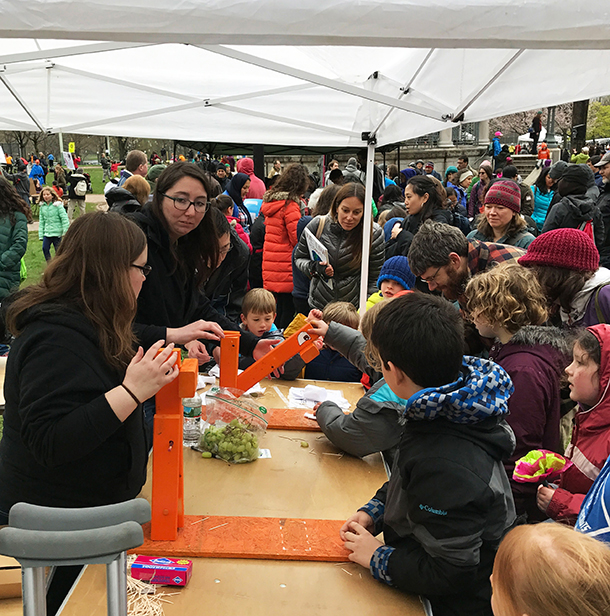 DOERING: In the crowd, a woman wearing a Muslim headscarf carried a sign that said, “This is what a scientist looks like.”

MOHAMEDI: If we want our children to truly believe that when they grow up they can be anything that they want to be, then the inherent racial and sexist prejudices within the sciences must. Be. Shattered! [CHEERING]

CHURCH: Why is it in some countries, like China, 89 to 90 percent of elected officials have degrees in science and technology? Maybe that’s a bit too much, but in the United States this number is one percent. [BOOS] All of you nerds, start running for office! [CHEERS]

DOERING: George Church. [FADE IN CROWD SINGING “THIS LAND IS YOUR LAND”] And despite the cold and soggy weather, plans were underway for another demonstration of people power - a climate march the following weekend on April 29.

[CROWD SINGING: “Join the resistance! Science is good for you and me!”]

The Atlantic: “All the Ways Trump’s Budget Cuts Science Funding”

LOE: Some scientists decided to opt out of the March for Science

LOE: Marching for the Earth and Science