Marching for the Climate, Before and In Trump’s Era 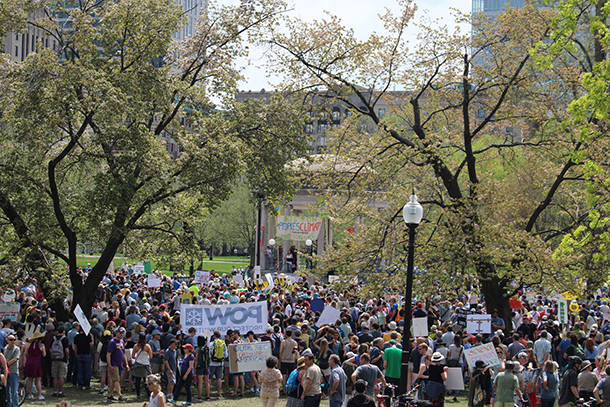 Hundreds of thousands worldwide rallied for the People’s Climate March on April 29th, but the mood was bleaker than the First People’s Climate March in New York City in 2014, when citizens demanded nations craft an international climate treaty. Now, a year after some 200 countries signed the landmark Paris Climate Agreement, marchers worry that the Trump Administration might pull the U.S. out of the accord. Host Helen Palmer reports on the Boston march and the changing landscape for climate action.

[MUSIC: “This is what Democracy looks like..." recorded live at the People’s Climate March in Boston]

PALMER: The message was clear at the People’s Climate March in Boston.

[MUSIC: “We are the leaders we’ve been waiting for”…]

Thousands rallied on Boston Common on April 29th, but in September 2014 nearly half a million people crammed the avenues of New York for the First People’s Climate March, to urge the nations to take bold action on global warming. It was the eve of the UN Climate Summit and the Living on Earth team was there. I was hanging out at 46th St and 6th Ave, and the atmosphere was joyful, almost like a carnival parade.

PALMER: There was a Balkan jazz band. There were singers and many familiar chants repurposed.

[PEOPLE CHANTING: “HEY-HEY, HO-HO, FOSSIL FUELS HAVE GOT TO GO!”]

PALMER: The organizers wanted a “big tent” because what’s happening to the climate affects everybody. More than 50,000 students marched. Over 1,500 different organizations were there - a strong labor contingent, including many from the Domestic Workers Alliance, brandishing brooms and mops. There were anti-nuclear campaigners, Veterans for Peace, many different faith groups, and Native Americans. 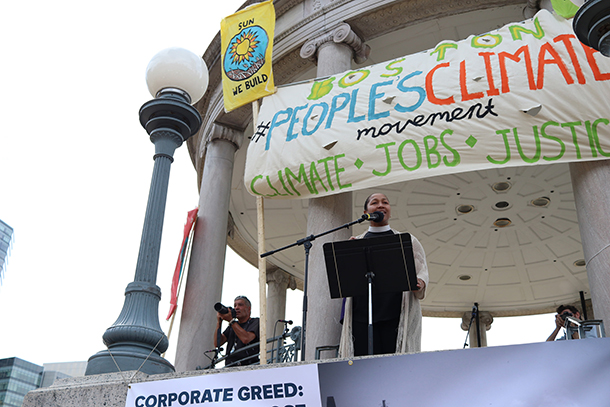 Rev. Mariama White-Hammond is a Minister for Ecological Justice at Bethel A.M.E. Church in Boston and a leader with the Massachusetts Interfaith Coalition for Climate Action. (Photo: Nathan Bishop)

ANSTER: My name is Britney Anster. I represent the Haliwa-Saponi nation of Hollister North Carolina. It’s important because we are nature. We are the air, the Earth, not just indigenous people, but all people. We share this communal Earth and we’re here fighting for climate justice, not just for us, but for all people, especially our future generations.

PALMER: Native Americans and Canadian First Nations were leading the march along with some of the other communities most affected by global warming, island nations and people on the frontlines who’ve already experienced weather extremes, people like Kathy Sykes from Jackson, Mississippi.

SYKES: I’m here because we as a people have to come together to do something about climate change. Mississippi has seen the brunt of it with Hurricane Katrina. We still have not recovered. We’ve had a big oil spill in the Gulf Coast. It is terrible. So we’re here fighting, trying to do whatever we can to draw attention to the need to stop climate change and save our world. 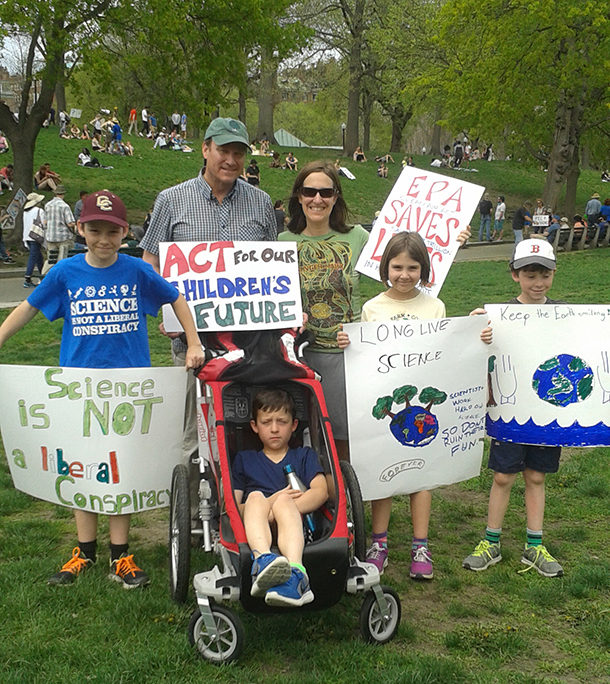 PALMER: And it seemed the nations were listening. The size and determination of the People’s March helped spur the momentum towards the crucial UN Climate Conference of Parties, COP 21 in Paris in December 2015. Urgency, diplomacy, and arm-twisting all helped persuade nearly 200 countries to sign onto the final Paris Agreement.

PALMER: John Kerry, then Secretary of State, had put US credibility on the line to make this deal happen, and his rosy optimism was shared by the Climate Change Commissioner for the European Union, Miguel Arias Cañete. 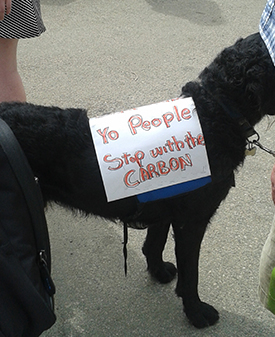 “Yo People, stop with the CARBON!”, a dog’s sign read (Photo: Helen Palmer)

PALMER: But the level of ambition to tackle, or even accept scientific concensus about the threat of global warming, seem to have evaporated in Washington since January this year. It was partly disappointment at new administration policies and an increasing sense of the dangers for the planet without action that brought thousands back onto the streets in 370 communities in the US and many more overseas for another Peoples’ Climate March on April 29th.

WHITE-HAMMOND: We are here because there is no Planet B. There’s no backup plan if we ruin this Earth that we have.

PALMER: The Reverend Mariama White-Hammond kicked off the rally in Boston with a message of urgency and unity.

PALMER: Health workers, vegans, faith groups, teachers, students, activists for employment and climate justice joined worried citizens to rally for an end to fossil fuels and raise the alarm about climate-related hazards that affect Boston and many coastal cities. 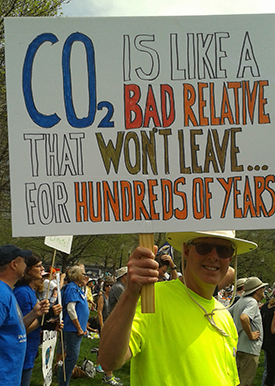 “C02 is like a bad relative that won’t leave… for hundreds of years” read one sign (Photo: Helen Palmer)

BAEHRECKE: We basically live on an ocean and we may not have a waterfront soon!

PALMER: There were the familiar hand-made signs. “Mother Nature says, ‘Cool It!’” and “C02 is like a bad relative who won’t leave for hundreds of years.” Even a dog named Ulysses wearing a sign that read, “Yo people! Stop with the carbon!" There were fiery speeches and music but overall a bleaker mood than the First People’s Climate March in New York in 2014.

LUCY: I mean, that march was just incredible. It was such an upswell of energy for the climate movement. Now there’s more of a fear that things won’t be heard, even though we’re speaking, but there’s more of a need even now I think than in 2014. There’s more of a sense that we’re up against something really big.

PALMER: Climate science hasn’t changed much in the last three years, but the political climate has undergone a sea change. The new administration is determined to roll back as many of President Obama’s climate actions as possible, including the Clean Power Plan, which underpins the US pledge under the Paris Agreement to cut carbon emissions about 27 percent by 2025. It’s uncertain whether the US will choose to keep that target or even stay in the Agreement. So, we may not always have Paris, an idea which upset some on Boston Common.

BAEHRECKE: If we pull out I think we’re crazy. We can’t afford to pull out because we’d send such a message to all the countries that are actually in the Paris Climate agreement. 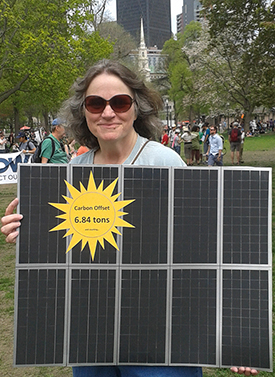 A woman at the march held a sign she made to represent her solar panels (Photo: Helen Palmer)

PALMER: But international opinion doesn’t seem to govern rhetoric or actions in Washington, and it’s one of the forces bringing people out onto the streets.

MILLER: When you listen to the news from Washington, there’s such a sense of powerlessness. Every day you can’t believe there’s yet another assault. So I think events like this, they’re really important in making you feel like, ok maybe alone, I don’t have any power but when I gather with my people, then I have some power.

PALMER: With views like that widespread, the recent pattern of record-breaking marches and rallies seems set to continue. As one popular sign reads: “The oceans are rising and so are we!”

[MUSIC: “DOWN BY THE RIVERSIDE” RECORDED ONSITE “I’m gonna fight for a greener world, down by the riverside. I’m gonna stand up for planet Earth.”]


The Washington Post: “The best signs from the People’s Climate March”

The Washington Post: “In the Trump White House, the momentum has turned against the Paris climate agreement”

LOE coverage of the 2014 march in New York City