The Charm and Mystery of ‘Steve’

Steve is sometimes accompanied by what’s been described by the Aurorasaurus blog as “a rapidly evolving green short-lived picket fence structure.” The Milky Way, our home galaxy, appears to intersect Steve in this image. (Photo: Adam Goodwin Blanchard)

When a group of photographers approached University of Calgary physics professor Eric Donovan with images of a purple streak in the sky, he had no idea what it was. So the unknown phenomenon was dubbed ‘Steve’ in the absence of an official name. Living on Earth’s Helen Palmer spoke with Eric Donovan about meeting ‘Steve’ and the quest to unravel the mystery of the strange streak in the night sky.

CURWOOD: It’s Living on Earth, I’m Steve Curwood. The Northern Lights, known as Aurora Borealis, are among the most magical and awe-inspiring phenomena. And in Northern Canada, where they are often seen, there’s a Facebook group called the Alberta Aurora Chasers, who pursue and photograph the eerie green, blue, and sometimes even red lights. And now thanks to advances in low light photography and coordination with satellite readings, images of rather odd purple and green streaks have revealed a strange phenomenon, called “Steve.” Steve came to light as they say when University of Calgary astronomer, Eric Donovan, arranged a talk by NASA researcher Liz McDonald, and the Alberta Aurora Chasers showed up in force.

DONOVAN: We went out afterwards to a pub, and they proceeded to start showing me photographs of the aurora that they take. And these are highly, highly talented photographers. They seem to have mastered the very difficult art of low light level photography with DSLR cameras.

One of them, guy named Chris Ratzlaff, said to me he had taken a picture of the proton arc. And we got into this little back and forth where I said, "No, you didn't," and he said, "Yes, I did," and I said, "No, you didn't." And the reason I was saying, "No, you didn't" was because there's a process called the proton aurora, and that is always sub-visual. You can't see proton auroral arcs. So, I said, "It's not that, but why don't you show me what you took a picture of." He showed me this beautiful, beautiful photograph of this kind of purple-mauve streak across the sky. I said, "That's not proton aurora. I don't know what it is actually." In science, we have this idea that you shouldn't put a name on something that attributes some physics, unless you know what is going on. And so I said, "Why don't you call it something else that doesn't imply a physical meaning?" 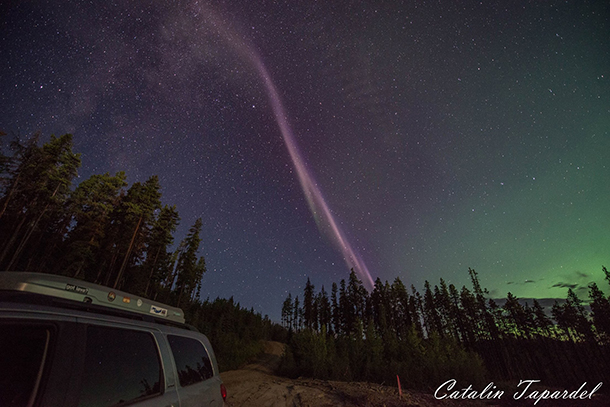 Steve appears as a purplish streak in the night sky, but only when viewed through a DSLR camera with specific settings. To the naked eye, it looks whitish, like an airplane contrail. (Photo: Catalin Tapardel)

PALMER: So, what did he come up with?

DONOVAN: So, what he came up with, and he said this right away. He said, "I’ll call it Steve." And the reason why he said that was because there’s this children's movie called "Over the Hedge", and the animals in this animated film call the hedge, I think, or whatever's behind it "Steve" because it makes them less afraid. They don't know what it is, so they call it Steve. So, Chris said, I'll call it Steve for that reason. And all of a sudden, with the Alberta Aurora Chasers, this caught on. And over the course of the next months, you would see posts like, "Oh, I saw Steve last night from Athabasca,” or whatever, and it really became the name that we use colloquially for this phenomenon.

PALMER: So, let's have a listen to that bit of the movie, just where they're talking about Steve.

CARTOON CHARACTER 1: I would be a lot less afraid of him if I just knew what he was called.

CARTOON CHARACTER 4: It's a pretty name.

CARTOON CHARACTER 7: Oh, great and powerful, Steve! What do you want?

CARTOON CHARACTER 8: I don't think he can speak.

STEVE: I heard that, young man.

PALMER: That was an extract from the movie "Over the Hedge" when they discuss Steve. So, when you heard this name "Steve" did it seem to you like not taking celestial phenomenon seriously? 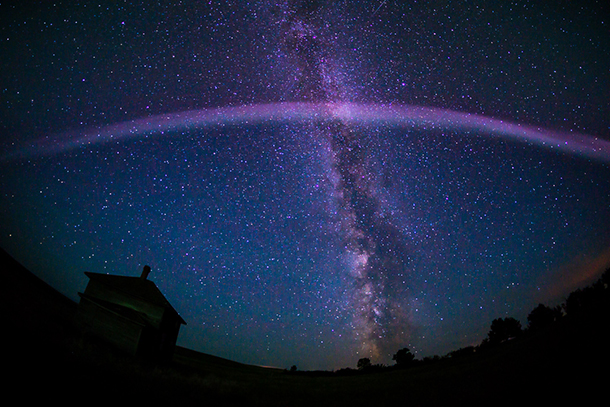 DONOVAN: No, no, not at all. I like it. I think it's fun, actually. But also, in physics, it's not unprecedented. In particle physics, they talk about charm and color, and things like this for properties of things that they don't want people to attribute a physical meaning to. So, you use some whimsical names. So in a way, Steve fits into this heritage of using whimsical names as a stand-in for a label, and I like the name Steve. I liked it right away, and I continue to.

PALMER: So, they said that it was a proton arc. You said it couldn't be a proton arc because you can't see proton arcs. So, what did you think it was?

DONOVAN: Well, we thought, “That's curious. That's interesting. Let's try to figure out what this thing is.”

And we have masses of cameras and other scientific instruments that we run, and they make very different kinds of data than we get with these DSLR cameras. And so, our data is way less beautiful. We collect it to accomplish certain things about understanding what's going on in the sky from a scientific point of view. So, what we did was we decided we wanted to figure out what this thing might look like in our data, and then to get an instance where we would see it in our data. And, one of these Alberta Aurora Chasers or someone else would have an image from a camera of the same thing, at the same time, in the same location, and we could see, yeah, that's Steve, and we would now know what it looks like in our data, and then that would give us a way of studying it scientifically. 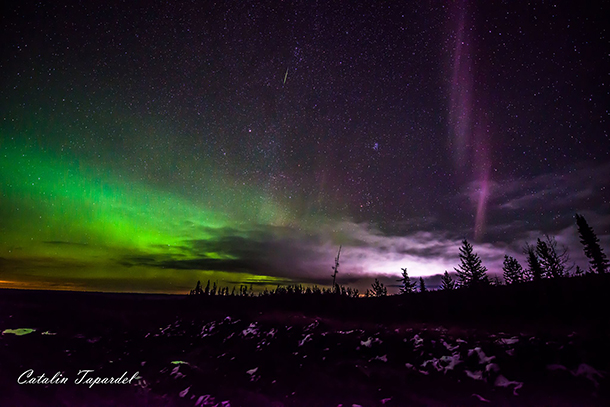 A shot of Steve and the Aurora Borealis taken in Kakwa, Alberta, Canada. (Photo: Catalin Tapardel)

PALMER: So, you then actually managed to get both the photographic data and your data. What did it tell you that Steve actually is?

DONOVAN: So, what happened was, we got an image in one of our cameras that had this feature that we thought might be Steve. I went onto Facebook. I posted, "Did anyone see Steve last night?" Five minutes later a woman from Vimy, Alberta, sent me a picture and she said, "Here's where I was. Here's where I was looking." And it was at the same time, and so we now knew this thing was Steve in our data.

And then, it only took a couple of hours. We found one of those satellites that has instruments from Calgary from the European space agency that flew through Steve while we were imaging it. We also had proton auroral observations that confirmed this thing was south of the proton aurora, and then from the satellite data we saw that the ion gas up there at 450 kilometers altitude was super hot - 6,000 degrees Kelvin -- in this little narrow line across the sky. The velocity of the ions was six or seven kilometers a second, which, for reference, is about how fast the space shuttle is moving relative to the ground, so very, very fast, and there was also no electric current associated with it that we could tell from the magnetometers on the satellite. So, we believe this is either caused by precipitating electrons that we can't measure right now, or there's some chemistry going on because of the heating, because of the very fast moving gas. It's definitely geospatial. It's definitely related to space physics. It's definitely coming from the magnetosphere. The energy is coming from the sun, but it's very different than anything we've dealt with before.

PALMER: So, where might this be coming from, or this is just basically interactions up there in the magnetosphere that we don't yet understand?

DONOVAN: My guess is that something is happening out in the magnetosphere on the night side of the Earth that’s causing a huge amount of gas to move closer to the Earth, and as it comes in, the stuff that is in the way has to get out of the way, and it starts to move westward fast. So, I believe this is being driven out in the inner magnetosphere by a kind of a collapse of the inner magnetosphere, stuff moving in and the staff that's there has to get out of the way.

PALMER: So, it's kind of like the thing that causes winds down here on Earth.

DONOVAN: It's very similar. I mean, there's a lot of electrodynamics involved which wind doesn't have down here, but it really is, it's a giant fluid in the system, and that fluid is moving around. And it's much more chaotic than the winds down here. I mean, wind is a very good analogy, very fast, very narrow wind.

PALMER: Well, it's fantastic that there is such a thing, there is this kind of stuff that is so unknown even to people who study the aurora, study the atmosphere like you. I mean, is this the first of many such things that may be just out there we haven't detected? 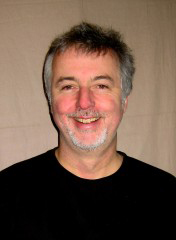 DONOVAN: You know, we tend to get wrapped up in solving problems in science, and we tend to get wrapped up in global warming, which, I mean, it's very serious obviously. We also think of science as the engine of the economy, and you think of science for innovation. And I think we forget about the inspiring nature of science, and that we're looking at the world. We're looking at the universe we live in. And I think what Steve has done is reminded me of the role we play in inspiring people because, I mean, I don't know what benefit there will be from Steve, except inspiring the public. I think we have to remember that science is also about discovery. It's about inspiration. It's about our world.

CURWOOD: Eric Donovan is a physicist and astronomer at the University of Calgary who helped identify Steve. He spoke with Living on Earth’s Helen Palmer. And for the record, Steve is a pretty good name.