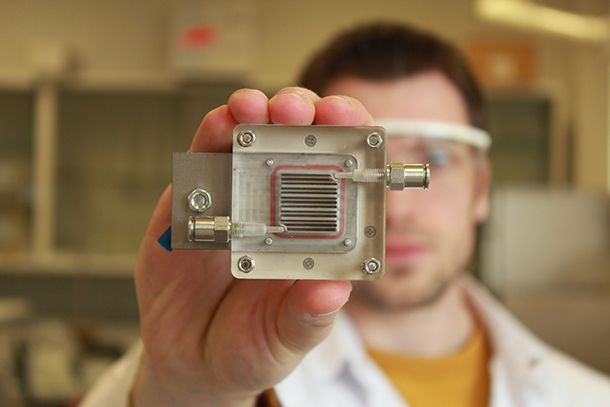 The Photoelectrochemical (PEC) Cell currently has an active area of only about one square centimeter. Sammy Verbruggen and his colleagues are working on scaling up the device. (Photo: KU Leuven News)

The WHO reported in 2014 that over 90% of the world’s population live with polluted air. But now Belgian researchers using solar-powered nanomaterials have decontaminated small amounts of polluted air with a process that generates hydrogen at the same time. University of Antwerp researcher, Sammy Verbruggen, joins Steve Curwood to explain how their tiny photo-electrochemical prototype device shows promise, but to make an impact it needs to be scaled up.

CURWOOD: Well, the world is awash in polluted air these days. Over 90 percent of us breathe it in every day, and as we have just heard at least one of those pollutants robs us of some happiness.

But with this bad news comes good news from the world of technology, as a team of Belgian researchers has developed a way to clean the air of some pollutants and convert them into simple hydrogen, using sunlight, special membranes and nanoparticles. Hydrogen is a clean industrial chemical and, when burned, simply makes water.

Sammy Verbruggen is a researcher from the University of Antwerp and part of the team that achieved this breakthrough, so we called him up to ask how it works. Sammy Verbruggen, welcome to Living on Earth.

CURWOOD: So, tell me. How was this project conceived and who were the primary players in developing this study?

VERBRUGGEN: Well, actually it's in two parts. So, for the one part, our group in Antwerp has been working a lot on trying to do air purification using light. So, we're developing a special type of nanomaterials called photocatalysts. So, nanomaterials that are activated by light and that way you can convert air pollution in less toxic compounds. Now, on the other hand there's the group at Leuven University where Professor Johan Martus is working a lot on these photo electro chemical cells. So, he's actually working on these membranes and devices to try to convert water into hydrogen gas. And now in this step, we actually try to combine both processes together and try to use not water, but actually polluted air to convert it to hydrogen. 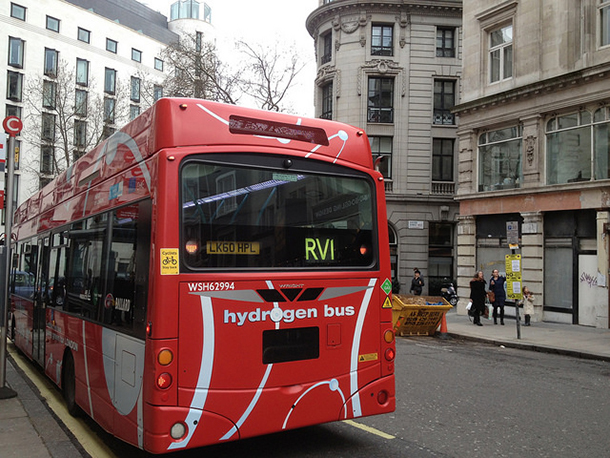 The city of London began a trial of hydrogen-powered buses like the one above in 2011. According to Verbruggen, hydrogen power’s most common applications today are in vehicles. (Photo: mangopulp2008, Flickr CC BY-NC-ND 2.0)

CURWOOD: Explain for us just how this air purifying process works now.

VERBRUGGEN: Well, at first instance you have the nanomaterial. It's activated by light, so you get charges inside of this semiconductor. Well, the next step is that these charges, they will attack some of the molecules that are adsorbed on the surface of the material, and that way you get very active oxygen species. We actually do an oxidation. So, you oxidize organic molecules until, when they're completely mineralized, you end up with CO2. The hydrogen is something very specific. During these degradation reactions, you also get some protons coming out of the molecules, and these protons, they go through a membrane to the other side of the device where another catalyst is present and it will reduce the protons to hydrogen gas.

CURWOOD: So, what kind of pollutants can you filter with this device, and how clean is the air once it's done purifying it?

VERBRUGGEN: Well, at first instance, we have been looking at quite simple, small, organic molecules, so our study primarily focuses on methanol, also in part, to acetic acid and some ethanol. So, fairly small organic molecules. But still, some of these molecules can be quite hazardous to your health as well, and for instance, formaldehyde, is a very known indoor air pollutant which can cause you headaches. Acetaldehyde, it's the stuff in your brain that gives you a hangover, so obviously they're not very healthy to you. So, attacking these small molecules is quite useful as well.

Ideally, everything that passes through the light side of the device gets oxidized to CO2, so to give you a very straightforward example, let's say we start from methane. So it's one carbon atom and four hydrogen atoms . In the most ideal case it will end up as one CO2 molecule at one side and two hydrogen gas molecules on the other side. Obviously, efficiencies aren't 100 percent as the device is proposed right now, but that's something we are working on.

Solar panels capture energy in Cariñena, Spain. Since the photochemical cell requires ultraviolet light to function and Verbruggen’s home country is far cloudier than the Mediterranean, he and his colleagues are working on improving the technology’s efficiency in regions with less visible light. (Photo: Diego Delso, Flickr CC BY-SA 2.0)

CURWOOD: So, Sammy, we all hear about, “Oh, this could be a great technology.” How optimistic are you about the possible implementation of what you have put together? I mean, how difficult is this going to be to increase this to a scale that will be useful?

VERBRUGGEN: It will certainly be challenging. There's no denying that. I think we're facing two major issues that have to be resolved right now to get it to a breakthrough level. One thing is to increase the efficiency. These materials that we are using, they're actually activated by UV light right now. So, if you have a look at the solar spectrum, the contribution of UV light is at most five percent of the total spectrum.

Now, what we are trying on one hand is to modify these materials so they can use visible light. So, in that way, we could extend our activity range, let's say, to 40, even 50 percent of the solar spectrum. Another thing would be to try to upscale this design, because in the first test we have been doing now, we are working on a membrane with an active area of about one square centimeter, which is obviously not much. If you compare this to other solar-driven technologies like solar panels you can put up on your roof of your house, we're looking at square meters of active area. So the upscaling towards larger membrane sizes will be the other challenge.

CURWOOD: So, talk to me about the amount of sunlight required to facilitate the process. You say it has to be ultraviolet, it has to be in the ultraviolet spectrum right now. How useful would this be, do you think, if it were to be cloudier?

VERBRUGGEN: Absolutely, and there's also the geographic position of the country you would like to use it in. I live in Belgium, and it's very optimistic to think you can drive everything on solar energy because it's indeed quite cloudy here most of the time. Whereas, if you look at real pilot scales of photocatalytic processes, they're mostly centered around the Mediterranean here in Europe or even in Japan there's also some applications of that. So, that's indeed a very good point. That's why we are also working on modifying these materials towards visible light because that's always around. 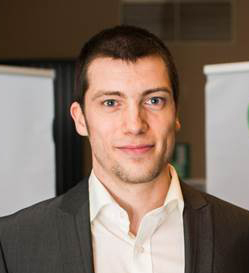 Sammy Verbruggen is a guest professor and postdoctoral fellow studying photocatalysis for environmental and energy applications at the University of Antwerp. (Photo: Antwerp, Smart Region Link)

CURWOOD: So, how big a deal does this have to become, Sammy, to make a significant dent on urban air quality? I mean, how possible would it be for your devices to clean up the smoggy air of, say, Paris or Beijing or Mumbai? There are a lot of places with a lot of dirty air.

VERBRUGGEN: Yeah, that's true. But I think it's a little utopia to think we can clean up an entire city. That's maybe a little far-fetched. But I think it might come in handy in conjunction with a very specific industrial process, for instance. I can imagine if you're in the paint industry or something, in textiles, that there are some processes involving a lot of organic solvents. So, I can imagine they have very loaded waste streams loaded with organic molecules, and they will have to meet some environmental quota. They can't just put in the air, or I hope they don't just put it in the air. So, if they could use a technology like this one, they can hit two flies at once. They could purify the air on one hand, but on the other hand, they can recover part of the energy that is stored in this polluted air as hydrogen gas, for instance.

CURWOOD: Sammy Verbruggen is a guest professor and post-doctoral fellow studying photocatalysis for environmental and energy applications at the University of Antwerp in Belgium. Thanks so much, Sammy, for taking the time with us today.