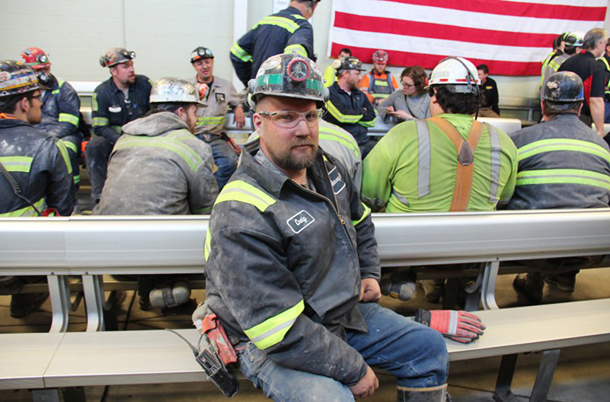 Coal still produces much more energy in the U.S. than solar, which powers less than one and a half percent of the grid. Yet there are now twice as many solar jobs as those in coal. As the Allegheny Front’s Reid Frazier reports, some former coal miners are becoming solar technicians, though it may involve a pay cut.

CURWOOD: Across America, the numbers of coal miners are declining while the ranks of renewable energy workers continue to swell, but aggregate numbers don’t tell the local stories. So the Allegheny Front’s Reid Frazier set out to check the impact of solar jobs in the heart of Pennsylvania’s coal country. Here’s his report.

FRAZIER: At Consol Energy’s Harvey mine--about an hour south of Pittsburgh--Craig Williams takes a mid-day break above ground, in a big room at the mine’s entrance. He’s in a hard hat, and he’s wearing a dusty, yellow-striped mining jacket. Though times have been tough in the coal industry, Williams and other miners here have managed to keep their jobs. He hopes to hang onto his job as a foreman.

WILLIAMS: Pittsburgh used to be big on steel. That’s mostly gone now. We’re one of the last, you know, industries around and hope to keep it that way.

FRAZIER: A father of two, he says, like generations before him, coal is the best way he’s able to support his family. Williams wouldn’t say how much he’s making, but nationwide coal miners make around $80 thousand a year.

WILLIAMS: If you had to take another job, in this area especially, you’re going to take anywhere from a 50 to 70 percent pay cut to what the next best thing that’s out there.

FRAZIER: But 40 percent of coal mining jobs have disappeared since 2011, and now only 50,000 of these jobs remain. Experts say automation, lower demand for electricity, and above all competition from cheaper fuels are what’s killing the industry. Those fuels include natural gas from fracking, and--increasingly--renewable energy.

Solar power now accounts for just under one and a half percent of electricity in the U.S. But according to the Department of Energy, Solar jobs now outnumber those in coal by more than 2 to 1. So, can laid off coal miners find jobs in solar?

GODBY: Well certainly it's a possibility, but there are a couple of major challenges. 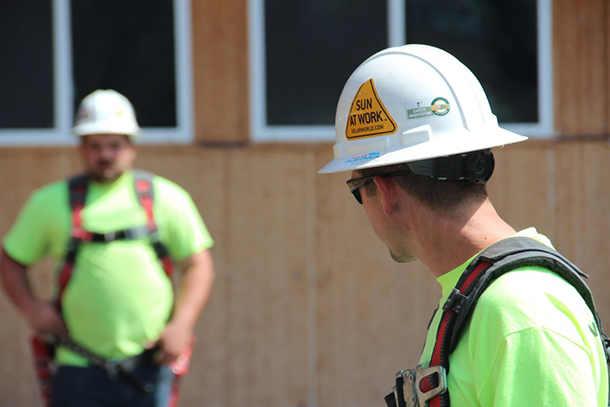 Solar jobs now outnumber coal jobs 2 to 1. But are laid off miners getting them? (Photo: Reid Frazier)

FRAZIER: Rob Godby is an energy economist at the University of Wyoming. He says one of those challenges is simple. Location.

GODBY: When you are thinking about coal mining in Appalachia, I mean, oftentimes there are generations of families in those regions, and it's just very difficult to pick up and move.

FRAZIER: And then, there’s pay. Coal miners make on average around $35 an hour, Godby says, in part because the job can be so dangerous. In renewables, the pay is more like $20 and $25 an hour.

GODBY: That doesn't mean you couldn't raise a family on that, but you're a lot closer to the average income in a lot of states in the solar industry than you are in mining industries.

FRAZIER: On a rooftop at a community center in Millvale, just outside of Pittsburgh, a gang of seven workers in neon green t-shirts bolt down solar panels. The crew includes 23-year-old Wylie Koontz, who worked at a coal mine, though as a lower paid contractor.

When he got laid off last year, he saw a job opening with Energy Independent Solutions, a local solar company.

KOONTZ: I didn’t like, just mentally be like, I’m going to completely switch. It was a coincidence I just found this job it was about the same pay rate that I was making before, so I just went for it. Ended up really likin' it.

FRAZIER: One thing that did not weigh on his decision: Climate change.

KOONTZ: “I don’t believe in the whole climate change thing or not. I mean, it good. It does takes the carbon for sure. It's a lot less, and it's a lot cleaner energy...

FRAZIER: But a steady paycheck, not necessarily the environment, is what attracted him to the job. Koontz says he likes the problem-solving he gets to do in solar, and he could see himself staying in the industry.

Brian Krenzelak was a roofer before joining the company seven and a half years ago. 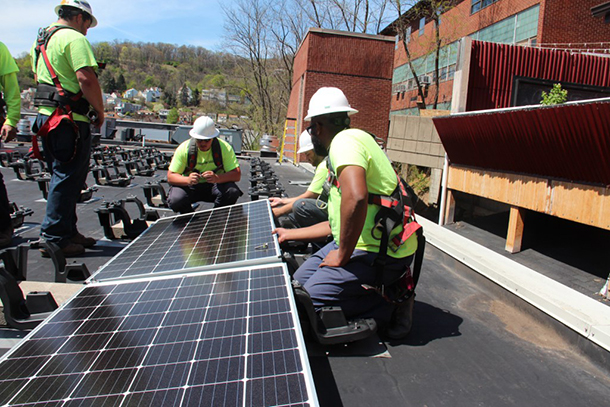 FRAZIER: Krenzelak installs solar and trains others, and he believes in the mission of green energy. His wife also works, and the couple have three kids, one in college, with another about to enter. They even have a second home in Florida.

KRENZELAK: You know, I do well with this company, very well. It covers what we need to cover. I mean, I'm not becoming a millionaire overnight but steadily have been building the nest egg for sure.

FRAZIER: Experts say solar’s boom is being helped by incentives that are schedule to run out in a few years. And they don’t know how long the surge in business will last. Some companies are reporting lower installations nationwide. But solar jobs in Pennsylvania grew last year by almost a quarter. And Krenzelak’s company, Energy Independent Solutions, is busy. Its looking to basically double its workforce of 22 over the next year and a half.

KRENZELAK: We had to slow the salesmen down at a certain point. We were selling so much solar. We had to actually slow them down a little bit until we caught up.

FRAZIER: Krenzelak likes the idea that his industry is up and coming. He says, when his crew went on a big installation recently, other contractors were curious about what they do.

KRENZELAK: So, there was iron workers there, carpenters, union laborers. Everyone’s coming up to us.

FRAZIER: He says it feels like solar is an industry of the future. And when he looks into the future, he likes what he sees. I’m Reid Frazier.


Listen to the story on the Allegheny Front website

“Can Coal Make a Comeback?” – Report from the Center on Global Energy Policy

NYTimes: “Today’s Energy Jobs Are in Solar, Not Coal”