Top Gear for the Electric Car 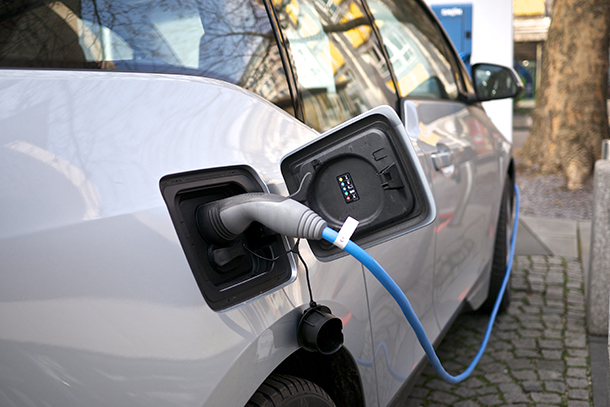 A ‘fill-up’ for an electric car. (Photo: PROKārlis Dambrāns, Flickr CC BY 2.0)

European nations and marquee car brands are setting a fast pace to electrify personal transport. For an overview of the electric and hybrid car revolution, Living on Earth Host Steve Curwood called on CarTalk blogger and green car journalist Jim Motavalli to explain what’s in play and how electric vehicles will benefit the planet.

The electric car is back. Battery vehicles dominated the market more than a century ago, and now the biggest car companies are betting they are coming back to stay. While electric and hybrid electric cars are only two percent of the market today, analysts are convinced gasoline and diesel vehicles are bound for commercial extinction in just a couple of decades or so. France says it will ban petroleum-fueled autos by 2040, and Volvo says by 2019 any newly designed models it sells will be electric or hybrid. GM already has an inexpensive electric car that will go more than 200 miles on a single charge, and this month Tesla starts selling its version of a more affordable electric with similar range.

Well, for an update on the electric car industry and its impact on self-driving cars and global warming, we’re joined by CarTalk blogger and green transportation reporter Jim Motavalli. Welcome back to Living on Earth, Jim.

MOTAVALLI: Great to be on.

CURWOOD: So, France has set this goal to, well, effectively ban petroleum vehicles by 2040. How realistic is that?

MOTAVALLI: I think it's very realistic, and I think by 2040 there won't be any gas or diesel cars on the road anyway. I think the technology’s moving very fast, that we will see the waning days of internal combustion by that point, so the ban probably will be fairly insignificant. It’ll be like banning horses or something like that. [LAUGHS] I think by 2040, we will have a totally different fleet of cars on the road.

CURWOOD: So, the other day Volvo said that all of their new cars starting in 2019 will be at least be partly electric. They’ll be hybrid or full electric. What exactly does that mean, and how smart of a business decision do you think this?

MOTAVALLI: There's been a little bit of a misconception about this announcement because the company will still be making gas cars after 2019. Effectively they will not be making any new models or introducing any new models that are gasoline or diesel-only after that point, and I think it's a very smart business move. I think it's a great idea, but the company was already moving in that direction. They started making cars that only had four cylinder engines. They're reducing the amount of gas that the cars use. They've gone to the policy of introducing hybrid and plug-in hybrid models for every vehicle in their fleet, so it's not a huge leap from where they were to where they say they're going to be in 2019, and I think it also has to do with who owns Volvo, the Chinese company Geely which is very bullish on electric cars -- and the Chinese government and the Chinese auto market in general are also very bullish on electric cars. There's dozens of automakers building them now, and the Chinese government wants the auto fleet to go in that direction largely because of horrendous auto pollution in China's cities. 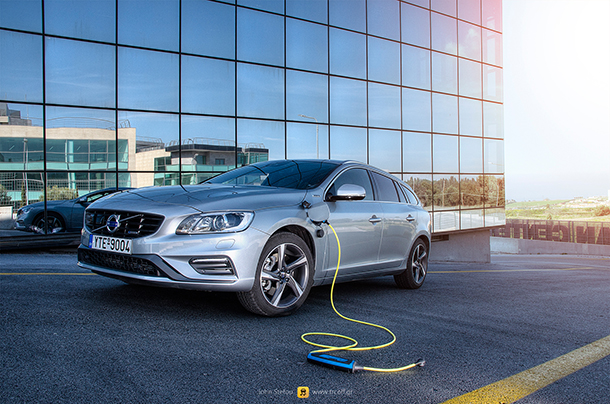 CURWOOD: Now, there is this study from Bloomberg New Energy Finance that suggests that the price of electric cars is falling rapidly and, in fact, will be able to compete cost-wise with traditional gasoline powered cars say by sometime in the decade. What do you think is behind this plummeting in the cost of electric cars?

MOTAVALLI: Well, the cost of battery vehicles is almost entirely based on the high cost of batteries, and that was a big barrier up until where we are now. But today battery costs are falling very rapidly. It's like Moore's law for electric vehicle batteries, and Bloomberg has said that 54 percent of new car sales and 30 percent of the global auto fleet will be electric by 2040, and, at that point, China, the US and Europe will make up more than half the global market. This is despite the fact that, right now, what's selling is big SUVs and crossovers, but every automaker has plans for electric vehicles, hydrogen vehicles, plug-in hybrids, and hybrids, and I think that by 2040 most cars will be fully autonomous.

CURWOOD: And yet today people are buying our gas guzzling cars in this country?

MOTAVALLI: Yeah, people are buying gas guzzlers, but I don't think that will continue. The gas prices are pretty low right now, and that's a huge determining factor. When gas prices were high, people were abandoning their big SUVs and their Equinoxes or whatever, and they were buying hybrids. But now they say the sales of the Prius is really down right now because of cheap gas prices.

CURWOOD: Talk to me about the advancements in battery technology in terms of their quality. How good are they? How cheap are they? What's changing? What's going on with batteries in this electric car push?

MOTAVALLI: The lithium-ion batteries we use today are pretty much descendents of the lead acid batteries in our cars now. They're more sophisticated versions of that, and they use a liquid electrolyte to move the electricity because we all know that electricity moves very quickly through liquid, including water. You don't want to drop your radio in the bathtub. [LAUGHTER] 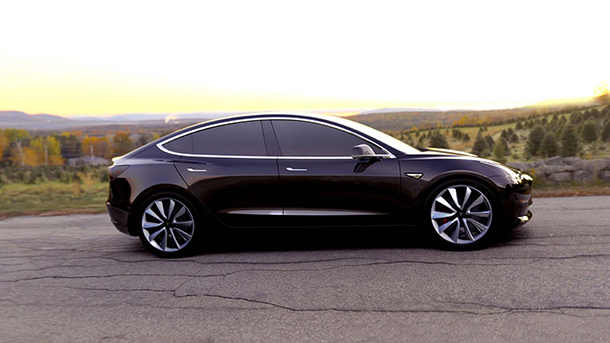 So if you can make that same electricity go through a solid material, then you have a solid state battery that's cheaper or easier to move and can store more energy, and we just heard about such a break through from a 94-year-old Texas researcher name John Goodenough. He says that he can build cheap batteries that will store five to 10 times the amount of electricity as the batteries we're using in electric cars today, and he's pretty confident about it.

Other people are skeptical that this technology will work. I'd like to hope that it works, but other people are working on solid-state battery technology also, and it would be a big breakthrough if it happens.

CURWOOD: Jim, the last time we spoke, Tesla had just announced its budget electric car, the Model 3 priced at $35,000 instead of $75,000 and $105,000 like their other vehicles, and the first ones are supposed to reach consumers later this month here, in July of 2017. What's the capacity of the Model 3 to revolutionize the way that car customers think about electric vehicles?

MOTAVALLI: Well, the Model 3 has created excitement like no other car and you can go back to... when Ford came out with the model A several years after the model T. That generated a lot of excitement, but I'm not sure there were 300,000 advance orders for it, and there is that for the Model 3, and people are just very excited about it. It's an affordable electric car that will have long range, 200 miles or more and also very fast and have all the latest infotainment technology, all that kind of stuff.

CURWOOD: Right now, you can go to a General Motors car for the same money or even less, and it has the same range. Why aren't people lined up to buy those cars?

MOTAVALLI: I think they should be lined up to buy the Chevy Bolt because I think it's a very, very good car, and it does have much of the same capacity that the Model 3 will have. It’s just that Chevrolet and Tesla are not equal brand names. Tesla is, I think, until recently it was worth more than General Motors in terms of the stock evaluation, but people love the idea of being able to buy an affordable Tesla.

CURWOOD: So, talk to me about government incentives both here in the United States and elsewhere. What role do you think they will play in the future of the electric vehicle market?

MOTAVALLI: Well, I think pretty soon they will be irrelevant. Right now, they're important because you got a $7,500 federal tax credit if you buy an all-electric car battery car. You can get less for plug-in hybrid, but this is because electric cars are pricey right now, but as we move forward, as batteries get cheaper, that won't be the case anymore, and they won't need the incentives. It's possible that the Trump administration could even reduce or eliminate those subsidies. There are a lot of things that could happen to those incentives. 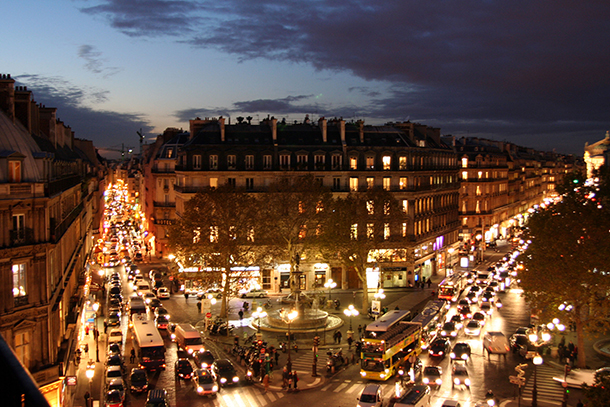 Right now states are also offering incentives of $3,000 in Connecticut. Massachusetts has a good one. I live in Connecticut, that has a pretty good incentive right now, $3,500, and those are better than tax credits cause they are like rebates. You get the money upfront. So, right now I could buy a Chevy Bolt for like $25,000, and it would be a loaded car with all kinds of bells and whistles because automakers are trying to make their electric cars look attractive, so they have the highest option packages. They have the best stereo systems. They have the nicest seats. Right now, if you buy something like the Toyota Prius plug-in, that is an extremely nice offer that you can get from Toyota and they want to sell more of them. Right now with cheap gas, it is hard to sell electric cars, and that's why they’re such a bargain for consumers right now.

CURWOOD: So, if this predicted shift to electric cars does happen in the big way that you're talking about, how much would this help us limit global warming? You know this one-and-a-half, two degrees target from the Paris climate deal and others talk about?

MOTAVALLI: You know, it's funny because I think the main reason we are not wildly out of compliance in meeting our global warming targets is because we switched largely from coal to natural gas, and, again, I think if the Trump administration wants to encourage other forms of fossil fuels like that, I think it’s sort of running uphill against the marketplace because we've switched largely to natural gas. It is cheaper than coal and easier to use, and it pollutes a whole lot less, so I think we're seeing big advantages in terms of global warming from that. That said, I’d say the transportation system, maybe it’s 30 percent of global warming, and I think we're moving people as much as possible into public transit. Young people are deciding they want live in cities - My own kids are like that - and they may not need cars. So, we're reducing our transportation footprint anyway.

CURWOOD: Jim Motavalli blogs for NPR's Car Talk, and he's a freelance environmental journalist. Jim, thanks so much for driving the story forward.

MOTAVALLI: Great. Thanks for having me on.


Washington Post: “Starting in 2019, Volvo will use electricity to power every new model”