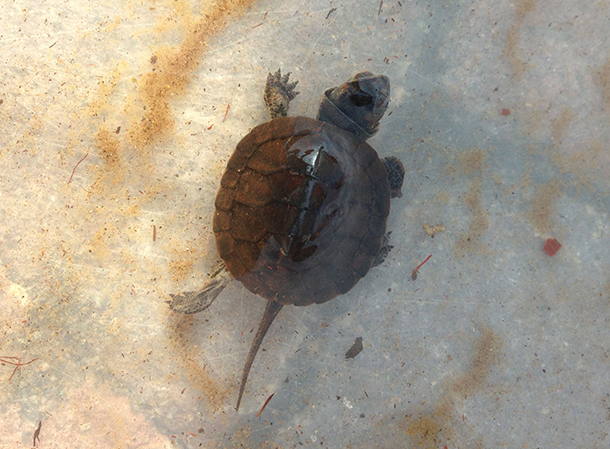 For Blanding’s turtles, which are threatened in Massachusetts, a program that pairs vulnerable hatchlings with schoolchildren is boosting their numbers. Living on Earth’s Jenni Doering describes the beginning of the ‘head start ‘cycle, when a new mother, Turtle 2028, laid her eggs in June of 2016, and follows her hatchlings as they emerge from the nest months later.

You might know Head Start as a government program to help give children from vulnerable low-income families a better shot at doing well in school and in life. But “head start” programs aren’t just for kids, as Living on Earth’s Jenni Doering reports from Concord, Massachusetts.

[SOUNDS OF BIRDS SINGING ON A SUMMER DAY]

DOERING: The Blanding’s turtle is a threatened species in the bay state, and baby Blanding’s face tough odds for survival.

DOERING: That’s Bryan Windmiller, the Executive Director of Grassroots Wildlife Conservation. The nonprofit sends the vulnerable hatchlings to schools, so kids can raise them.

WINDMILLER: We give them at least a forty-fold increase in their chances of surviving to adulthood.

DOERING: That’s because little turtles are an easy snack for predators. Their tiny, half-dollar-sized shells are actually folded inside the egg and Bryan Windmiller says they’re still soft for months after they hatch. 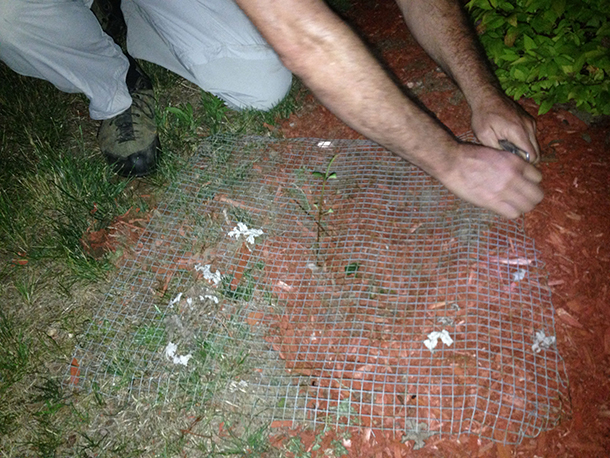 Covering the nest with a mesh screen protects it from predators like skunks and raccoons (Photo: Don Lyman)

DOERING: But natural predators aren’t the only hazards that threaten the turtle hatchlings.

WINDMILLER: Sometimes they’d be destroyed completely unintentionally by people, because sometimes they nest in farm fields that would get plowed, or they nest in people’s perennial beds that might get turned over and stuff like that.

DOERING: And because of these threats, the Blanding’s turtle population at Great Meadows National Wildlife Refuge in Concord has been declining for decades.

WINDMILLER: There are only about 50 adult Blanding’s turtles here at Great Meadows, spread among a bunch of wetlands. And that’s down from probably 150 in the early 1970s. So our overall goal here is to help restore this population.

DOERING: To kickstart their recovery, Bryan and his team track female turtles and guard their eggs while they incubate during the summer.

[SOUNDS OF A SUMMER EVENING]

DOERING: Late on a warm evening in June 2016, I huddled with Bryan and his team around the newly-dug nest of Turtle 2028.

WINDMILLER: There we go. Nice. 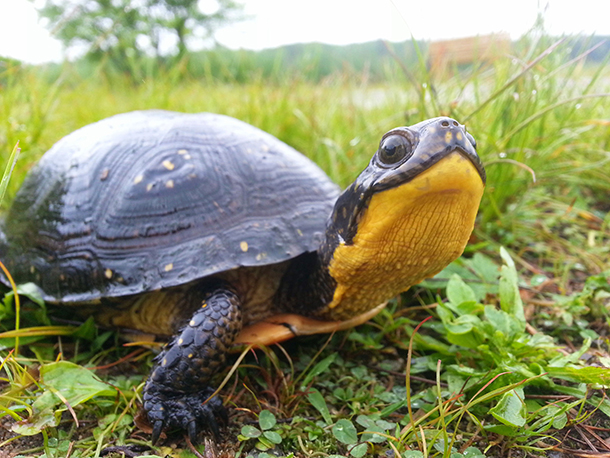 The bright yellow throat of the Blanding’s turtle can help biologists recognize the species, which is threatened in Massachusetts, from a distance (Photo: Emilie Schuler / Grassroots Wildlife Conservation

WINDMILLER: So we can just expose the top three eggs of her nest. Actually you can see at least four. They’re about, uh, four inches deep. We’re very glad, she started about 7:30. It’s now about 11:30. Looks like she pretty recently finished, so now we’ll just cover it back up with dirt, like she did, like Mom did, and put a screen over it so raccoons and skunks can’t get it.

WINDMILLER: And then we just wait until late August or September, when the babies come out.

DOERING: We waited all summer of 2016 for those baby turtles to hatch. That year New England wilted in a severe drought, and in September the turtles hadn’t yet hatched. Bryan Windmiller was concerned that they might have perished, so he went to check the nest with Program Coordinator Emilie Schuler. They removed the protective metal screen.

WINDMILLER: Okay, you gonna go for it, Emilie?

WINDMILLER: So this records the temperature every hour. It will allow us to predict with reasonable accuracy whether the hatchlings are boys or girls.

SCHULER: So I think I’m seeing our first little friend here. There’s something, some egg and some movement.

SCHULER: There’s movement. There he is.

WINDMILLER: It’s a little one. 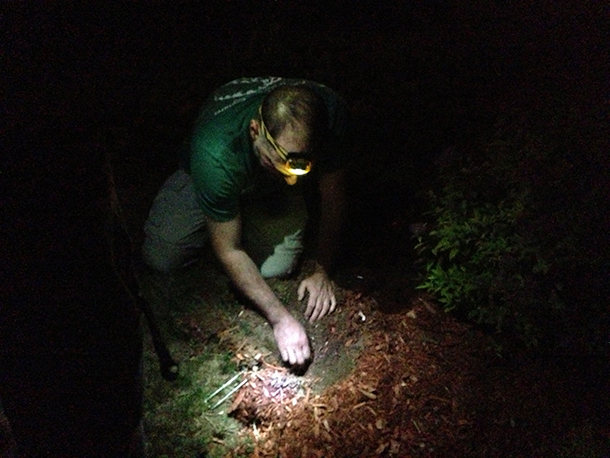 Bryan gently digs in the mulch in front of a Concord home to uncover the first few eggs in turtle 2028’s nest. (Photo: Don Lyman)

WINDMILLER: Yeah, wonderful. Looks like that one too has been hatched for a little bit, just been sitting there.

So Emilie just dug up – Here’s an egg, that, you can feel, it’s got a formed embryo inside of it. But I’m suspecting that it’s not viable anymore. This also, this nest may be pretty small because this was a first-time mom, and first-time moms often lay pretty few eggs compared to the normal average of about ten.

DOERING: All in all, Turtle 2028 laid four eggs in her nest, a low number probably due to the searing drought in 2016.

WINDMILLER: That’s less than half the size of a typical Blanding’s turtle clutch. And two out of the four survived, which is also low. The good news is, we’ve got a baby who looks healthy. And this is the second one from this nest. And we have a lot of fourth graders in Concord who are really looking forward to meeting their turtles.