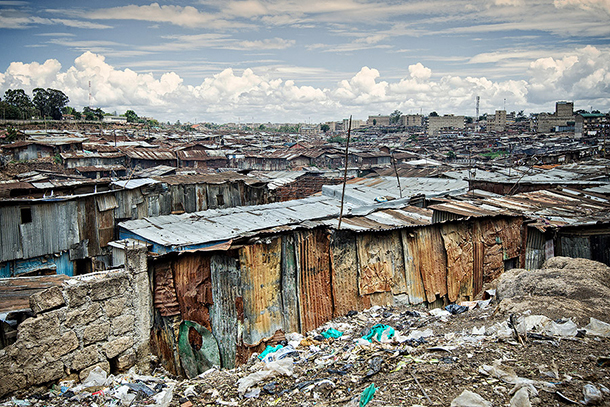 Kenya now has the world’s toughest ban on plastic bags, intended to combat pollution. Plastic pollution, as seen here in a slum outside Nairobi, is a major environmental issue for Kenya, but many residents oppose the ban since Kenya is a leading plastics manufacturer in the region. (Photo: Claudio Allia, Wikimedia Commons CC BY-SA 3.0)

CURWOOD: We’ve had a break over the summer, so it’s more than time to catch up with Peter Dykstra for the view beyond the headlines. Peter’s with Environmental Health News, EHN.org, and DailyClimate.org, and he’s on the line from Atlanta, Georgia.

DYKSTRA: Well hi, Steve. Hurricane Harvey is certainly the environmental story of the week if not the year, so let's just park our dark cloud over Houston for just a little bit more.

CURWOOD: Alright, more Harvey it is.

DYKSTRA: Well, first, the early estimates on flood insurance losses, $20 billion or more, likely a lot more than that. They’re on track with the huge losses first seen with Hurricane Andrew's toll back in 1992, when it hit Florida. That's a major reason why re-insurance companies, like Swiss-Re and Munich-Re – Those are the giant reinsurance companies that back up retail insurers in the wake of catastrophic losses -- They’re one of the first industries to have started sounding the climate alarm about climate risks, all the way back in the 20th century.

CURWOOD: Oh yeah, the 20th century. Where did the time go?

DYKSTRA: Indeed, and back here where we are in the 21st Century, what of the two Texans in the United States Senate, Ted Cruz and John Cornyn? Well, back in 2013, enough Republicans crossed party lines to guarantee smooth sailing for a federal aid package to help victims of Superstorm Sandy, primarily in the overwhelmingly Democratic states of New York and New Jersey. But the two Texan Senators were so upset by what they saw as pork-barrel larding of the aid package for two states controlled by Democrats that they voted against Sandy relief. 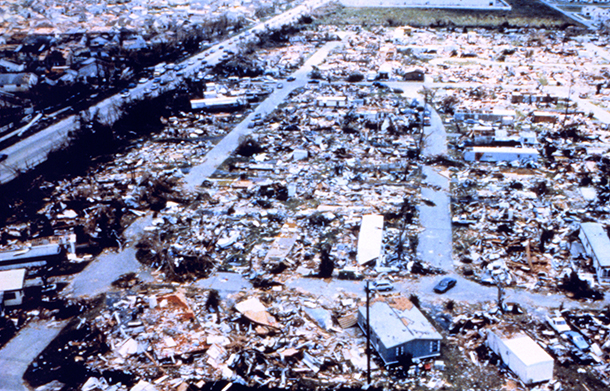 CURWOOD: Hmmm, so let me guess. Now that a bright red state like Texas is up for federal help, those senators are leading the fight for Uncle Sam's money to help Harvey's victims, huh?

DYKSTRA: They are and all while charging their opponents with playing politics by attempting to link Harvey to politics by blaming climate change.

DYKSTRA: According to Reuters, Kenya is enacting a plastic bag ban for the ages. Up to $40,000 in fines or four years in prison for using disposable plastic bags.

CURWOOD: Wow, anyone who's followed this issue knows that plastics in landfills or in our oceans or on the streets of developing countries has become a huge problem, but that kind of sounds rather draconian to me.

DYKSTRA: Yeah, it does, but Kenya's environment minister says the new law will target bag makers, and Kenya is one of the largest plastic bag-producing nations on Earth. They’re not gonna target a guy or a woman with a single plastic bag in the marketplace. And Kenya’s leading manufacturers lobby group says the ban will cost thousands of jobs and shut down businesses, so we’ll see how it all works out.

CURWOOD: We will indeed. Hey Peter, what have you brought us from the environmental history vault for this week?

DYKSTRA: Let's turn the clock back 29 years to the Presidential election of 1988. George H.W. Bush ultimately creamed Mike Dukakis, but, to help understand how that happened, we have to imagine a time when environment was front and center in a presidential campaign, and the Republican was attacking the Democrat for perceived inaction.

CURWOOD: Yes, this was back when Republican presidential candidates sometimes campaigned on the environment. 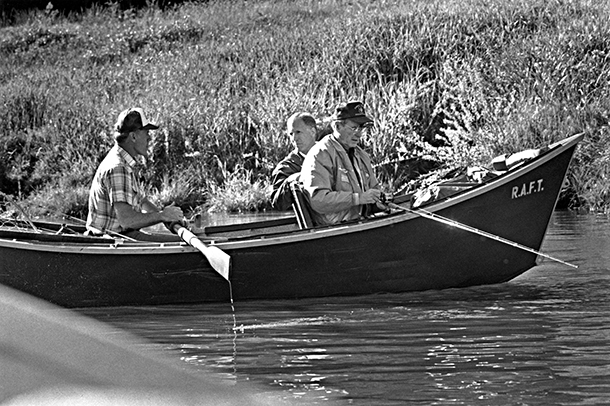 During the 1988 Presidential election, George H.W. Bush painted himself as a lover of outdoor recreation – he’s seen here fishing on the Rogue River in Oregon -- and vowed to be the “Environmental President.” (Photo: Bureau of Land Management, Flickr CC BY 2.0)

DYKSTRA: Yeah, that 20th century thing again. Two months before the election, Bush launched a brutal campaign focused on the Massachusetts Governor, Mike Dukakis, and his perceived failure to clean up Boston's "Harbor of Shame." And Bush vowed to be "The Environmental President."

CURWOOD: Well, the first President Bush did push through a strengthening of the Clean Air Act and signed the international climate agreement that led to the Kyoto Accord.

DYKSTRA: But four years later, he lost a re-election bid in which he labeled the Vice Presidential candidate Al Gore as "Ozone Man." So, go figure. But that pivot away from environmental concern was pretty much the last peep out of Republican White House environmentalism.

CURWOOD: But it did help give those of us in Boston our nice clean harbor.

Peter Dykstra is with Environmental Health News – that’s EHN.org and DailyClimate.org. Thanks Peter, talk to you again real soon.