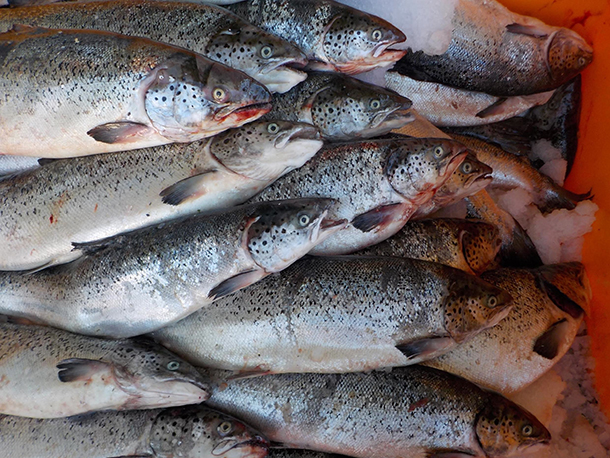 More than 160,000 Atlantic Salmon escaped from a broken aquaculture pen off the coast of Cyprus Island in the Puget Sound. These escapees were caught by local fishermen and await identification. (Photo: The Wild Fish Conservancy)

It’s no surprise to see high numbers of Chinook and Coho Salmon in Puget Sound off Seattle, but a catastrophic failure of a large aquaculture pen near Cyprus Island freed thousands of non-native Atlantic salmon. In the aftermath of this outbreak, conservation group Wild Fish Conservancy (WFC) has launched a lawsuit against the international corporation, Cooke Aquaculture, the company responsible. WFC Executive Director, Kurt Beardslee, joins host Steve Curwood to dive into this fishy fiasco.

CURWOOD: Puget Sound, the large Pacific estuary system in Washington State, offers the perfect refuge for spawning Coho, Chinook and Sockeye salmon, but in late August local fishermen were bewildered when they caught Atlantic salmon as well. Days later, the news broke that 160,000 Atlantic salmon or more had escaped from damaged aquaculture nets moored off the San Juan Islands.

In the wake of this great fish escape, the Wild Fish Conservancy has filed a lawsuit against the company that owned the fish farm, Cooke Aquaculture, for damages to the watershed.

Kurt Beardslee, the Executive Director of Wild Fish Conservancy joins us now to explore the impact of this fishy jail break. Welcome to Living on Earth, Kurt.

CURWOOD: So, Kurt, how did you find out about this salmon escape?

BEARDSLEE: Actually, it wasn't a public announcement. It was an individual that left a message at our office that had heard a conversation between the Coast Guard and the net pen industry that there had been a problem, and so it was just the public, basically, let us know, and that was three days after the event had occurred, and there had been no previous public notice.

CURWOOD: And to what extent were you able to actually see the damaged farm salmon pens and the damage, yourself? 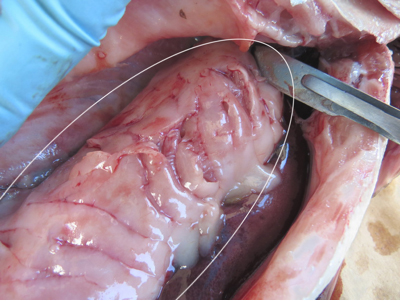 Many of the escaped salmon were bloated with fat, like the specimen above. As Kurt Beardslee noted, farm-raised fish are pumped with food and bred to grow fat faster and at higher concentrations than their wild counterparts. (Photo: The Wild Fish Conservancy)

BEARDSLEE: I had actually previously had been up there. I just basically turned around and went right back. I took a boat out to the site and I was expecting to see a net that had basically come loose from the physical structure of the pen, the rigid structure, but instead I saw a twisted mass of steel pipe and cable and chain. I have been doing work on Atlantic salmon net pen issues for many years, and I've never seen anything quite as episodic as this.

CURWOOD: What happened? Do you have any idea what took things wrong there?

BEARDSLEE: It appears that the net pen itself was structurally failing, and just an average tide finally made it collapse.

CURWOOD: From your understanding, how aware was Cooke Agriculture they had a problem with there in fairly imminent risk of collapse?

BEARDSLEE: They were very aware that their structure was structurally compromised. It was old. It needed replacing. Their reports back to the agencies stated exactly that, and they were hoping to harvest one more year out of these pens before they replaced them, but their gamble didn't work out. The sad part is, is that our agencies that are supposed to oversee this allowed them to fully fill these pens with 305,000 non-native fish. They allowed them to risk the health of Puget Sound, so this industry could get one more year's worth of growth. That is not very good oversight, from my perspective.

CURWOOD: I got to confess. I'm a bit confused. Why would anyone farm Atlantic salmon in Puget Sound, the home of, well, there’s wonderful Pacific salmon there? Why would they do that in the first place?

BEARDSLEE: Well, Atlantic salmon are more easily domesticated. They deal with these close containments much better than Pacific salmon, so the industry has chosen pretty much around the world to use Atlantics in that industry.

CURWOOD: What kind of impact was this type of open water aquaculture having on the region, even before all these Atlantic salmon escaped.

BEARDSLEE: That's a great question. And it's one that I was hoping more people would learn about during this event because this was a catastrophic event that obviously caught a lot of people's attention, but what doesn't seem to get their attention is what happens every single day in Puget Sound. This industry is, is highly subsidized, and I say that because they dump all of their waste directly into Puget Sound. On some occasions, aside from fecal material they'll also have pharmaceuticals or viruses or parasites that they put directly into Puget Sound that are harmful for the health of Puget Sound and for all organisms that live in Puget Sound. 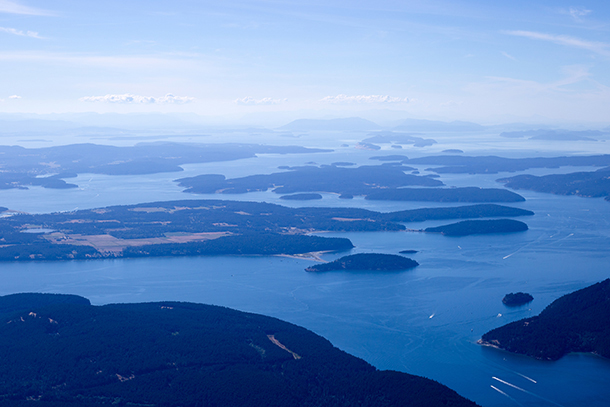 The San Juan Islands form an archipelago at the northern end of the Puget Sound. Though these waters are public, they house all of Cooke Aquaculture’s net pen operations in the state of Washington. (Photo: Eric Prado, Flickr CC BY-NC 2.0)

CURWOOD: So, now that these Atlantic salmon are out in Puget Sound, some 160,000 of them, more or less I guess, what are the risks to the indigenous species? I'm thinking especially of the Chinook. What risks do these fish pose?

BEARDSLEE: Well, there’s a host of risks. First, they are going to compete for food and for habitat. They are going to compete on the spawning ground. Even though they can't successfully reproduce with Pacific salmon, they can compete for mates and have unsuccessful spawnings, and that can be a problem on its own. They can introduce viruses and parasites that they may have contracted in the pen themselves. We know very little about the health of these fish because the industry is really quite opaque.

CURWOOD: Now, I imagine you've seen some of these escaped, farmed Atlantic salmon. What they look like?

BEARDSLEE: We saw a number of fish that physically on the outside had some problems. We saw some that had very deformed jaws. They could have been deformed because there they had been treated for something called Yellow Mouth which basically dissolves their jaws. It's a very ugly thing to have. These fish could not close their mouths, their twisted jaws. They all have very worn fins. They're quite bloated, many of them, because their fat levels are extremely high. They're basically force fed to grow really quickly, 18 months at the max, instead of a couple, two or three years. We took organ tissue samples to analyze for the potential of viruses that that they may have been carrying, but the organs, many of them were almost unrecognizable.

I've been doing this for 28 years and I've seen thousands and thousands of fish, and I, actually, and my technical staff are baffled at what we're seeing. These are not signs of healthy fish. Something's wrong. 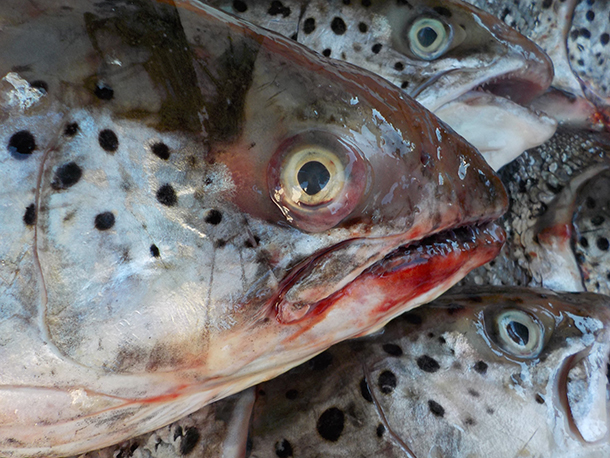 CURWOOD: So, how are the fishermen, particularly the native Lummi fishermen, responding to this spill? What benefits, if any, are they seeing from bigger catches? I mean, there are a lot more fish right now.

BEARDSLEE: We've spent a lot of time with the Lemmi tribe, and I have not seen a single tribal member that's happy about what's happening. I've seen nothing but individuals that are very upset. They're out there to catch their Pacific fish that they have evolved with for the last few thousand years, and they had to take time away from their normal fishery, which they depend on, to go and catch these fish for the industry, because the industry's entire emergency response plan was to tell the public to go fishing.

I've been working over the entire holiday here, contacting the Emergency Response Command Center that was set up in Anacortes, to try to get funding for some of these fishermen that have caught these fish. They have them in cold storage. They don't want to sell them to the public. They want the industry to pay them back, and the representative I finally got ahold of from Department of Fish and Wildlife said, “The industry has no responsibility to pay the public back for cleaning up their mess.”

I'm sorry, but it was our government that permitted this industry. Our government works for us. They need to end up getting money from this industry to pay back these individuals that are now out great amounts of time and energy and money.

It's just one more aspect of how this industry is just totally subsidized by the public. They get to use public waters for free. They get to have their cleanup for free, and it's just not right.

CURWOOD: Now Kurt, you direct the Wild Fish Conservancy, and I understand that you have issued a notice of intent to sue Cooke Aquaculture. In other words, you're filing a lawsuit, you have filed effectively a lawsuit. What do you hope will come out of this litigation?

BEARDSLEE: We are hoping to hold them accountable for this toxic spill of these exotic fish. This was a negligent act. This was not an act of nature, as they tried to portray it to be, and when it is negligence the release of these fish is actually considered a pollutant, and we are going to hold them accountable for polluting Puget Sound and all of the biological ramifications and economical ramifications that come with such a large pollution. 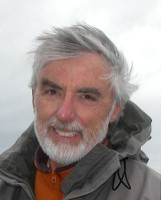 CURWOOD: Kurt, before you go, how many of these fish you've been caught so far, and what recovery were still remains do you think?

BEARDSLEE: Well, a lot of fish had been caught. As I was saying, gosh, a week ago, we had 50,000 pounds of them at home port in Bellingham. I just was talking to commercial fishermen yesterday, and they say they're still catching these fish, so we're planning on gathering more of those fish and sampling those as well, but there's still a lot to be done. This is not over at all.

CURWOOD: Kurt Beardsley is Executive Director and Co-founder of the Wild Fish Conservancy based in Duvall, Washington. Kurt, thanks so much for taking the time today.

BEARDSLEE: Thank you very much, Steve.

CURWOOD: We contacted Cooke Aquaculture for a statement. Their Communications Manager, Chuck Brown, sent an email that reads in part,

“We will review the Wild Fish Conservancy’s claim and we will respond through proper channels. Our focus has been on properly and safely removing the fish and equipment from the farm and working with tribal partners, experts, and agencies to meet our obligations.”