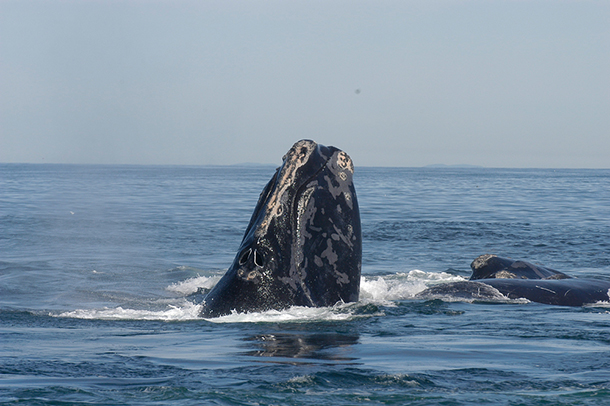 North Atlantic right whales, an endangered species, usually spend their summers in and around the Gulf of Maine to feed on copepods. (Photo: Moira Brown / the New England Aquarium, Wikimedia Commons public domain)

Northern Right whales are endangered, with only about 500 left, so scientists became alarmed this year when 13 carcasses were spotted. Most deaths were in Canada’s Gulf of St. Lawrence, an area far north of the whale’s usual summer range in the Gulf of Maine. Erin Meyer-Gutbod, a postdoctoral scholar at UC Santa Barbara, tells host Steve Curwood that warmer waters may be driving the favorite food of these whales further north, where the lack of regulation puts the cetaceans at risk of ship strikes and entanglement in fishing gear.

CURWOOD: They called them “right whales” because they were the “right” whales to hunt, rich in blubber and baleen, slow-moving, and likely to float, not sink, when harpooned. These qualities spelled the near extinction of the mighty right whale, but thanks to the discovery of oil, laws to protect them from hunting and time, numbers have rebounded and now some 10,000 of them swim in the southern ocean. But in the north Atlantic, there are less than 500 Northern right whales, and, when 13 of them were found dead this summer, NOAA declared an “Unusual Mortality Event.”

10 of those dead whales were in the Gulf of St. Lawrence, and researchers at Cornell suspect fast warming ocean waters may be a reason why. Erin Meyer-Gutbrod, a post-doctoral scholar at UC Santa Barbara is part of that team. Welcome to Living on Earth.

MEYER-GUTBROD: Thanks for having me on your show.

CURWOOD: So, how unusual is it to find right whales as far north as the Gulf of St. Lawrence?

MEYER-GUTBROD: So, that's a pretty tricky question because there hasn't been a lot of survey effort up there. The right whales traditionally start off in the spring off of Cape Cod Bay, and then they spend their summer in the Gulf of Maine and Bay of Fundy and off the Scotian shelf. And, while they're seen occasionally farther north than that, it's never been considered a traditional part of their feeding grounds. But what's happened in the past few years is the intensive survey effort counting right whales in the Gulf of Maine and Bay of Fundy area has seen much fewer right whales than they're used to seeing over the summer.

And so this caused sort of a brief crisis where the scientists were wondering, “Where have all the whales gone? Is it possible that there's been a mass mortality event?” And it actually caused scientists to start looking farther afield to see where these whales are spending their time in the summer. So, they've just started a more intensive survey effort up in the Gulf of St. Lawrence, and so we're thinking that the right whales are beginning to occupy as of the past several years the Gulf of St. Lawrence in much higher numbers than has been seen in the past.

CURWOOD: So, let me ask you this. You talk about 13 deaths. Where did you find those whale carcasses?

MEYER-GUTBROD: Well, that's part of why this story is so unusual. First of all, the number 13 is higher than any previous year in terms of carcasses found, and, with a population that only has about 500 hundred, 13 is more than two percent. So, this year seeing 13, and then 10 of them are up in the Gulf of St Lawrence, this is completely unprecedented.

CURWOOD: So, of the 13 Northern right whale carcasses that were observed, what do you think killed them? What did the necropsy show?

MEYER-GUTBROD: Results from the necropsies aren't available yet, they take a couple of months. So, there is some preliminary evidence of both vessel strikes and entanglement, but we're all waiting with bated breath to hear the results of these necropsies.

CURWOOD: So, the obvious question is then, what do you suspect is causing so many deaths among the Northern right whales, and for you to find these carcasses, so many in the Gulf of St Lawrence and Canada? 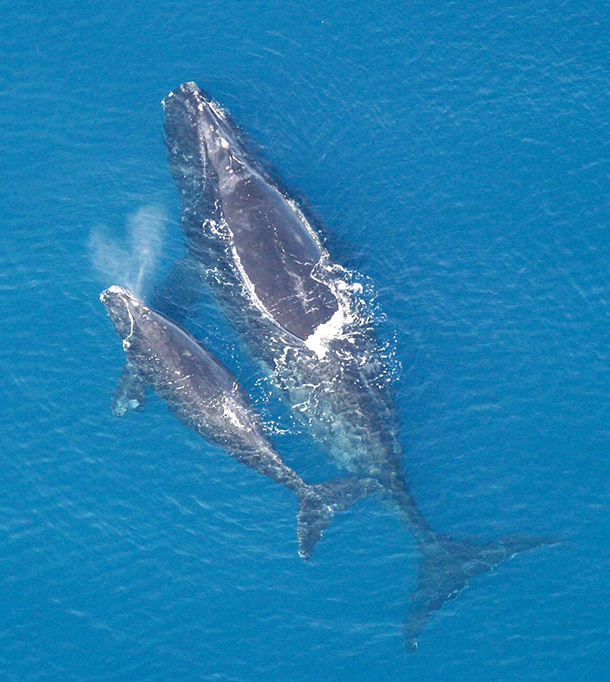 MEYER-GUTBROD: Well, the right whales are traditionally occupying the Gulf of Maine, and as a result the US has put in many protections for this species so that they won't be as vulnerable to fishing gear entanglement and ship strikes, and the US has implemented regulations including mandatory vessel speed reductions. Scientists have put a series of hydrophones in the water. Hydrophones are underwater listening devices. When they hear a right whale, they can then send out a message to all of the boats that are in the area saying, “Hey, there's a right whale nearby. Please slow down”. And then the fishing industry has also made a lot of changes. A lot of the fishing lines now run along the sea floor instead of in the middle of the water, which makes it a lot harder for a whale to get tangled up in them. So, these are expensive fishing gear implementations that have actually made a big difference in the rates of anthropogenic mortalities in the Gulf of Maine. Now, all of a sudden the whales are heading up farther north where these protections haven't been implemented because the whales aren't traditionally there, so why should Canada put in the resources to make these expensive changes? But now that we've seen them up there everybody is scrambling to figure out why and to figure out how we can put the same protections in place in the Gulf of St. Lawrence that are already in place in the Gulf of Maine.

CURWOOD: So, how is this related, do you think, to climate change?

MEYER-GUTBROD: Well, that's an interesting question and one that we can't fully answer, but I've been looking at changes in right whale demography over a 30 year time series, and I found that the changes in the amount of food that the right Whales eat - Whales eat copepods called Calanus Finmarchicus, and there's high degree of variability each year in the amount of these copepods, and in years when there's not a lot of copepods, the right whales tend to have fewer babies. So, the problem is, the females, it's a very energetically intensive process to be pregnant, to spend a year lactating, and then whether or not a female is able to have another calf quickly depends on how quickly she can replenish the blubber that she lost during her previous pregnancy and lactation. With this rapid warming that's happened in the past few years in the Gulf of Maine, scientists are wondering whether or not the warmth has caused fewer copepods available for the whales to eat. Unfortunately, we've been monitoring copepod abundance for 60 years straight, and due to budget cuts in 2011 we stopped processing these samples. So, we actually don't know whether or not the Gulf of Maine is filled with copepods in these past few years.

CURWOOD: And, for the non-scientists listening to us, just briefly describe copepods.

MEYER-GUTBROD: Copepods, you can think of them sort of as a bug in the sea. The right whales like these copepods because they're really fatty. So, they're rich and calorically intensive, compared to the other zooplankton of similar sizes.

CURWOOD So, I gather you're trying to connect these dots here, that you're suspecting that there is, in fact,
the copepods that right whales like to eat there’s more of that up in the Gulf of St. Lawrence and less of it now in the Gulf of Maine, and they're moving not so much because they're finding the water a little bit warmer, but because their food is.

MEYER-GUTBROD: That's right. That's the theory, and at least the modeling studies that I've done in
the past do not indicate that whales are dying because of lack of food. It's much more likely that
they're just reproducing much slower. The question is more, if they're searching for food, what is that
going to mean in terms of the more common forms of mortality, which are anthropogenic in origin, these
fishing gear entanglements and vessel strikes? So, if the right whales go straight to the same places, we're
able to implement those protections. However, if the prey availability changes, and the distribution of these
copepods change, then these right whales need to spend more time swimming, looking around for those
dense patches that they need to eat, so more time swimming – I mean you do the math -- it just increases the
chance of getting entangled in fishing gear.

CURWOOD: Indeed. Now, Erin, what kind of discussions are going on with the Canadian environmental Authorities to see about making the Gulf of St. Lawrence a safer place for right whales to be? 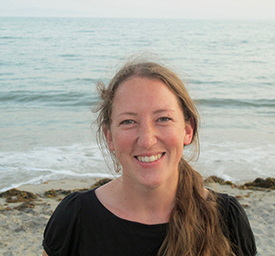 MEYER-GUTBROD: Yeah, the DFO in Canada is very concerned with the huge mortality event that’s happened with right whales up in the Gulf of St. Lawrence. So, Fisheries and Oceans Canada has made some moves to implement protection on the fly. At first they instituted some voluntary vessel speed reductions, and then a couple of weeks ago, those have transitioned in to mandatory speed reductions for vessels of a certain size. Canada also closed their snow crab fishery early to try and pull some of the gear out of the water to reduce the chance of entanglement, and I believe there are other fisheries that are being delayed, the crab fisheries, to try and wait until the right whales have left their summer feeding grounds before they put all this gear in the water.

CURWOOD: Erin Meyer-Gutbrod is a post doc at UC Santa Barbara. Thanks for taking
the time with us today.

MEYER-GUTBROD: Thanks for having me on your show.